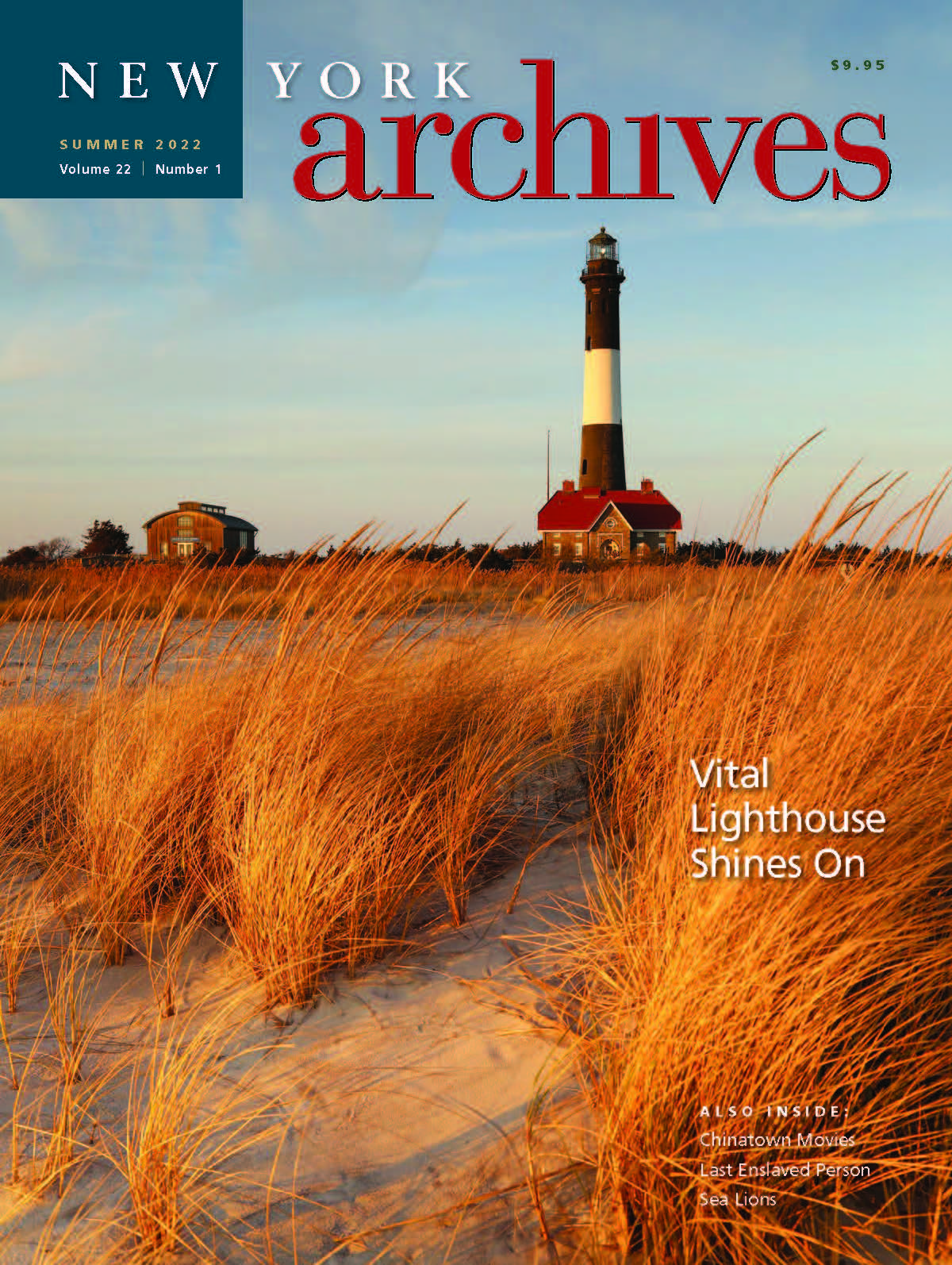 Sea Lion Stars
Gary Bohan Jr.
The Hulings trained sea lions with kindness, showing the world how talented their protégés could be..

“Black Soph”
Jennifer M. Cassidy and Sallie S. Sypher
Historians tell the story of the woman who may have been the last enslaved person in New York, but there are still unanswered questions.

Midnight Movies in Chinatown
Kenny Ng
Chinese moviegoers flocked to theaters in the US in the early part of the twentieth century, nostalgic for their homeland.

Records help trace the woman who may have been the last enslaved person in New York.

In 1855, twenty-eight years after slavery was abolished, there was a solitary enslaved person listed as living in New York State. The introduction to the Census of the State of New York for 1855 placed “one aged slave” in our small county of Putnam.

New York State’s history of chattel slavery is now recognized, but Putnam’s predominantly small holdings did not seem a likely place for slavery to ever be profitable. Until the Revolution, most of the farmers here were tenants of the Philipse family, whose eviction as Loyalists had enabled their rent-paying tenants to become owners. But, with a few exceptions, farms were small and could be worked by the owner’s family without the perceived need of enslaved labor.

The great majority of slave-owners held a single person in bondage. In the 1790 census, of 53 slave-owning households, 34 had a single enslaved servant, 9 had just 2, and 10 held 3 or more. In the 1800 census, of 41 families who held enslaved workers, 28 had 1, 8 had 2, and 5 held 3 or 4 persons. Unlike slavery in the South, enslaved laborers ordinarily lived with the families for whom they worked, and their challenges were different. But they were isolated from one another and only very rarely had a family life of their own.

In 1814, just two years after Putnam’s separation from the more prosperous Dutchess County, only .5% of the population was enslaved compared with 2.3% in Dutchess. The total number of enslaved persons in Putnam dropped off quickly after final emancipation in 1827. The 1830 census in Putnam counted four remaining: in 1840, just one. This had to be “the one aged slave” referred to in the 1855 state census.

More Questions
Who was this person? A man or woman? Who was the individual’s owner? And how and why should slavery have persisted this long after abolition? Using the library and archival sources in the Putnam County Historian’s Office and the County Archives, we were able to answer some questions, only to stumble on more.

Censuses were the first place to look. Unfortunately, the 1855 state census schedules for Putnam County—as well as most of the county’s 1845 schedules—have disappeared, leaving only the statistical summaries. The 1850 federal population schedules, where all individuals were first listed by name, did not include a category for enslaved persons. In addition, census records often reflect census-taker error, making them somewhat unreliable. Notwithstanding possible error, the 1840 federal census, which records only heads of household by name but enumerates other free and enslaved persons, produced the first clue. Alexander Kidd Patterson’s household in the Town of Patterson included the only enslaved person in the county, a woman between the ages of 55 and 100, the only person recorded in his household other than himself.

It seemed that this woman was likely the person for whom we were searching. But how did Alexander come to own her after the abolition of slavery? From family histories in the historian’s office as well as federal census schedules showing the number, gender, and approximate ages of each household’s slaves, it was most probable that this still nameless enslaved woman became Alexander Patterson’s responsibility at the 1831 death of his mother, Sarah Patterson, and that ownership had passed to Sarah from her husband Matthew Patterson, for whom the town is named.

Dead End?
But the trail went cold after Alexander Patterson. Sometime in the early 1840s, in his old age and by then a long-time widower, Alexander Patterson moved to Illinois, where his son had settled and where he died in 1845. But he could not legally have taken this enslaved woman with him into Illinois; indeed, she stayed in Putnam County, according to the statistical summaries for the 1845 state census. What happened to her after Alexander Patterson left? What arrangements did he make for her? With whom was she living? It seemed that we had reached a dead end until we came across the following in Philip K. Smith’s 1877 Dutchess County history, under the section relating to the town of Patterson:

“A colored woman known as ‘Black Soph’ died in this town in the autumn of 1876, at a very advanced age. Neither she nor any other person knew her exact age, but the supposition is it approximated one hundred years. She was formerly a slave of the Cornwall family and died on the farm on which she had worked as a slave. She was probably the last person living within the counties of Dutchess and Putnam, who was held as a slave within their limits. During the last few years of her life, she was too feeble to work.”

From this account, published just a year after her death in November 1876, we felt confident that “Black Soph” was the last enslaved person in New York referred to in the 1855 state census book. But how did she end up on a Cornwall family farm? From family history records in the Putnam County Historian’s Office, we found the connection between the two families. Alexander Patterson’s widowed sister Martha had been married to Samuel Cornwall. Samuel died in 1801, but Martha was alive when her brother left for Illinois.

When Martha died in 1846, she left many children, among whom were James H. Cornwall and Emma Cornwall, who was unmarried. In the 1850 census, “Sopha Paterson” and “Nansey Paterson” (both described as Black) are listed in James’s household, as are his other sisters, including Emma. Sopha was said to be 35 years old, and Nansey, 30. In the 1860 census, they are listed again in James’s household but this time as “Sophia Cornwall” and “Nancy Cornwall,” and there is no indication that they are Black. But they are now listed as 30 and 25 years old, respectively. Nancy died in 1862, and at James’s death in 1864, his farm went to Emma, and along with the farm came the aged Soph. By the 1870 census we find the two women—Emma and Soph— living all alone on the Cornwall farmstead. And in this last census Soph is listed as a servant, her name has become Sophia Provost, and she is said to be 43 years old.

Different Surnames
Sophy had three different surnames in three decennial censuses. Her surnames in 1850 and 1860 are explicable: in 1850, she had recently been enslaved by the Patterson family, and by 1860, she had been with the Cornwalls for about fifteen years. But where the name Provost comes from is a mystery. Notwithstanding the name changes, Sophy is clearly the same person in each census. But if she is “Black Soph” who died at a “very advanced age” in 1876—and there is other evidence that she is—how can we account for the nonsensical ages assigned to her by the census taker—35 years old in 1850, 30 years in 1860, and 43 in 1870? It is likely that the census taker was careless or hurried and probably never saw, let alone interviewed, either Nancy or Sophy.

Emma Cornwall died in June 1876, and the probate records in the county archives yielded no will for her; however, her nephew James H. Cornwall administered her substantial estate and paid out funds from it for the care of “Sophy (old colored servant),” which entailed her expenses while she lived as well as burial expenses after she died in November, just a few months after her mistress. It seems evident that despite her census ages, she is the “Black Soph” referred to in 1877 by Philip K. Smith as having died “at a very advanced age.”

Sophy was buried as Sophia Provost in the Presbyterian-Episcopalian Cemetery in Patterson where she shares a tombstone with Nancy “Baily,” who had died earlier. The inscription reads “Our faithful servants.” Sophy and Nancy were buried among the Pattersons and Cornwalls, right next to the sisters Eliza and Emma Cornwall, and with a similar stone. Clearly, in her later years the Cornwalls believed themselves to be responsible for her care, and in death she lies among those who had once enslaved her.

Our search revealed the name(s) and approximate age of the last enslaved person in New York, as well as with whom and where she lived. But there are unanswered questions. Why was Sophy considered enslaved in 1855 when slavery had been abolished in New York in 1827? According to historian Michael J. Douma, “By 1830, New York’s slaveholders had almost completely relieved themselves of the legal responsibility of maintaining superannuated slaves.” That Sophy was listed in the 1830 census as free may have been Sarah Patterson’s attempt to rid herself of the responsibility of caring for her old servant for the remainder of her life, or Sarah Patterson may have believed that the New York emancipation law of 1827 had freed Sophy.

There is another possible explanation for Sophy’s enslaved status: Some of the few exceptions to New York’s emancipation law of 1827 were enslaved persons who were born before 1799 and imported into New York. That exception could have applied to Sophy: She was certainly born before 1799, and she may have come from Africa and been enslaved by Matthew Patterson. Writing just after her death, Dutchess historian Philip K. Smith noted: “Her personal appearance is spoken of as being somewhat unusual. One striking feature was the disfigurement of her face caused by two white sores, one on either cheek.” The white “sores” were most probably scars, their symmetry conceivably the result of intentional ritual scarification in Africa either by her tribe or by slave raiders.

We will most probably never know how Sophy first came to be enslaved by the Pattersons or why she was recorded as enslaved as late as the 1855 state census. But the available records suggest that Sophy, known to some as “Black Soph,” was New York’s last legally enslaved person.

The Putnam County Historian’s Office manages the Putnam County Archives, as well as a non-governmental archives and a library. In the library’s special collections are the volumes of statistical summaries of the state censuses where we noted that Putnam County was home to the only enslaved person in New York State in 1855. And so began our search. We pieced together information from federal censuses, which were our most important archival resources, easily available on the internet. The confirming piece to the puzzle was right under our noses in the records of the Putnam County Surrogate’s Court. Buried in the voluminous records in James H. Cornwall’s petition for letters of administration of his aunt Emma’s estate, we found provision for the maintenance and then burial of “Sophy (old colored servant).” Our final archival resource was written not on paper, but in stone, in the cemetery in Patterson.

For more about the history of slavery in New York, see: