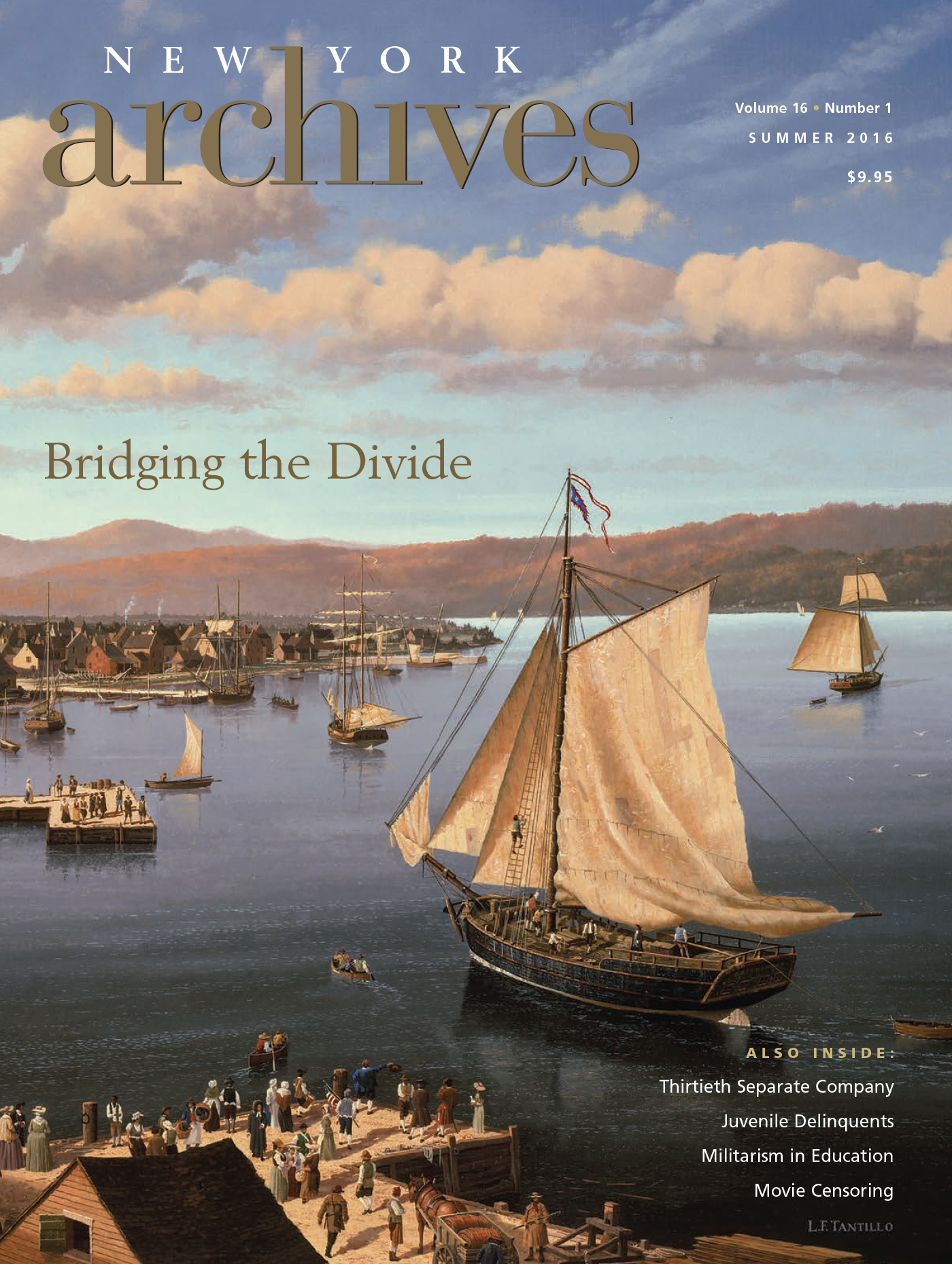 Elmira’s Brave
Rachel Dworkin
During the Spanish-American War, the Thirtieth Separate Company out of Elmira faced life-threatening conditions without ever experiencing combat.

In Loco Parentis
Josie Madison
At the New York House of Refuge, Joseph Curtis fought to create something of a nurturing home for troubled youth.

The Sheriff of Albany County

With a lively resentment toward authority, Abraham Yates Jr. was Colonial Albany’s everyman.

I am writing a book about the American Revolution that I hope will offer fresh perspective on that very well-documented period. In particular, I wanted to include in my narrative someone who would give a street-level view: a worker as opposed to an elite figure. Stefan Bielinski, the founder and director of the Colonial Albany Social History Project and the former Senior Historian at the New York State Museum, was kind enough to help me ponder. We discussed several of the nearly 16,000 individuals whose lives he has catalogued in the online “People of Colonial Albany” database. I became intrigued by one of the first people he brought up.

His name was Abraham Yates Jr. He was born in Albany in 1724, the son of a blacksmith. He was English on his father’s side; his paternal grandfather supposedly was part of the English force that took over New Netherland (though I have not found evidence of that). His mother, Catalina Winne, was a Dutch woman who descended from settlers of New Netherland. Albany was still a very Dutch place in the mid-18th century—there were gables on houses, koekjes for the children, delft tiles around the hearths–– and Yates grew up speaking Dutch. He apprenticed as a shoemaker, then entered that trade. But he wasn’t content with his lot, and apparently began teaching himself the law sometime in the 1740s, and became interested in politics. Albany at the time was under the political control of a few powerful families. Winning political office was not a matter of appealing to constituencies but of getting the blessing of one of the great families. Abraham Yates aligned himself with Robert Livingston, the scion of Livingston Manor. With his support, Yates became sheriff of Albany County in 1754.

Caught in the Middle
He was not a natural fit for the job. The work involved riding the range, corralling outlaws, dealing with Indians, and acting as hangman. The one visual image we have of Yates shows a squinty, seemingly awkward man. Prior to this, he had spent his time mending shoes and reading books; nothing in his life pointed toward adventure. But he took on the duties during what turned out to be one of the most eventful periods in the region’s history. There were struggles over land between the manor lords and newcomers who wanted to settle. Yates found himself caught in the middle; at one point angry squatters held a pike to his chest and threatened to run him through. Then came the French and Indian War. The enemy was the French, but Albany was a staging area for the British army, and Yates quickly came to believe that the real problem for Albanians was the English soldiers who were supposed to be defending them. The sheriff was flooded with reports of soldiers abusing the local citizens: breaking into houses, harassing women, stealing property. Soldiers even tore down parts of the stockade to burn as firewood, weakening rather than strengthening the town.

Yates complained to the Earl of Loudoun, the head of British forces in North America. Loudoun rebuffed him, belittling his authority. Yates went over his head and filed his complaints with Lieutenant Governor James De Lancey. Loudoun approached Yates on the street and the two had a public confrontation. Loudoun said he had seen the letter Yates sent to the governor and that it was filled with lies. Yates replied that every sentence could be proved. Loudoun had previously used the local jail for military purposes; he now warned Yates against discharging a military prisoner he had confined there. “Sir,” Yates replied, “I have already discharged him.” “By whose order?” Loudoun demanded to know. “By the King’s writ,” Yates responded. Loudoun then ordered the sheriff to stay daily within his sight—“and if you do not do I shall send for you with a file of muskets, with their bayonets fixed.” The Albanians who were witness to the exchange must have thought that would be the end of it. Instead, the not terribly threatening-looking sheriff replied, “My Lord, I have no time to wait upon you. I have other business to attend.” Loudoun, barely containing his fury, vowed that for Yates’s insolence he would turn his house into a hospital for wounded soldiers and the local church into an artillery storehouse. “I don’t know what you will do, My Lord,” Yates replied coolly, “but I know you have no right to do it.”

This remarkable exchange, which Yates detailed in his journal, revealed the man’s grit, his sense of right and wrong, and what would be his lifelong determination to stand up for the abused and against authority. It also marked his turn away from Britain, twenty years before the colonies revolted.

A Radical Political Turn
Yates seems to have been born with a lively resentment toward oligarchs and authority, and a preference for what he called the “middle sort” of people. In fashioning his political stance, he apparently had as a mentor William Livingston, the younger brother of his patron. Livingston was a lawyer working in New York City and a promoter of radical Whig philosophy. The journal he cofounded in 1752, The Independent Reflector, was intended, as he declared in its pages, to uphold “the civil and religious RIGHTS of my Fellow-Creatures.” The journal developed ideas from John Locke and other earlier proponents of individual rights in England. England’s Bill of Rights dated to 1689, but the Hanoverian kings, backed by the aristocracy, had largely ignored it, instituting a standing army, acting without Parliament’s approval, and in other ways violating the principles of representative government. The radical Whig movement had made little headway in England, but in 1750s America its ideas began to take root. Yates was part of this radical political turn.

Yates Party
Yates next ran for city council, and won with a new approach to politics. Times were changing in Albany. As the population expanded, the city was becoming a center of trade servicing the surrounding area. Newcomers from New York City and as far away as Europe—bricklayers, dyers, weavers, tanners, carpenters—were changing the fabric of society. Old loyalties to the powerful families were fading. Yates launched his political career by building a constituency of commoners, people with kindred economic interests. He begins referring to his “party.” In time, others spoke of a “Yates party.” And indeed, he brought two of his nephews, both bearing his surname, onto the city council in 1771 and 1772.

In 1773 Yates was blindsided by political forces; after a decade in city politics he was voted out. A coalition of interests loyal to the patrician families, reacting to the rise of the new political party he personified, wedged him aside.

But it scarcely mattered, for suddenly all the talk was of the British as an outright enemy. In the atmosphere of enthusiasm and confusion leading up to the Revolution the city’s activists turned to Yates for leadership. The Albany Committee of Correspondence, Safety and Protection— a shadow government that would run the city in wartime— first met in January 1775 and elected him its chairman. Two months later he became a delegate to New York’s Provincial Congress. He served in a variety of offices and on many committees and subcommittees throughout the revolutionary period. He helped set up a state government, draft the state’s constitution, and oversee the war effort, in the process corresponding and meeting with George Washington, Alexander Hamilton, and other notables.

Pertinacity and Conceit
With victory and the founding of the American Republic came a debate over the form the national government should take. The Articles of Confederation were perceived as too weak a foundation, but Yates —ever suspicious of elites and authority— was among those who feared that a stronger federal government would simply replace British tyranny with a home-grown one. He warned the delegates to the Constitutional Convention that their actions would “sign the death warrant of American liberty.” He believed that individual liberty was best maintained by keeping power in the states. The state constitutions, he said, “administered upon republican principles are the greatest blessings we enjoy,” whereas, he warned, “the greatest curse” would be a national constitution. As just such a national constitution looked to become a reality he sounded an alarm that would echo through states-rights movements of later eras: “In a word, the new constitution will prove finally to dissolve all the power of the several state legislatures, and destroy the rights and liberties of the people.”

Not surprisingly, Yates drew the particular ire of Alexander Hamilton, leader of the Federalist cause. Hamilton called him “a man whose ignorance and perverseness are only surpassed by his pertinacity and conceit.” He got personal in his slandering of Yates, saying, “He hates all high-flyers, which is the appellation he gives to men of genius.” And Hamilton revealed his elitism when he flung a final slur. Yates, he said, was a mere “shoemaker.”

A Return to Beloved Albany
Attempting to defeat the Constitution was Yates’s one great involvement in national politics. After he failed, he returned to his beloved Albany. He became mayor in 1790, and stayed in that office until his death in 1796. In recent years, historians of the American Revolution have divided themselves into two groups: those who feel that the spark for revolution was the work of the elites and those who believe it came from the lower classes. In Yates, we have someone who bridges this divide: a man of humble beginnings who trained himself in the law and in the new Enlightenment ideas. Yates became a player in the world of politics and revolution. But his truest concerns were local; his interest was always “the middle sort.”
In the panoply of the founding fathers, Abraham Yates Jr. was a little man. And that’s how he wanted it.

The most comprehensive collection of papers related to Yates’s life is in the New York Public Library. The collection mostly covers the period from 1750 to 1796. It comprises 3.1 linear feet of material, much of it correspondence with the likes of George Clinton, Abraham Lansing, Robert Yates, Philip Schuyler, and Robert Livingston. Notable among the items is Yates’s Journal and Copybook, which covers the years 1754-1758, including his service as sheriff of Albany County.

What proved even more valuable to me than the collection itself is a remarkable copy of much of its material, which Stefan Bielinski made in the 1970s, when he was considering writing a biography of Yates. Bielinski’s typescripts of the voluminous handwritten documents in New York Public Library’s collection made research infinitely easier.

The New York State Library and Archives hold several items. Notable among these is Yates’s Account Book. It covers the period 1754-1790 and offers a fascinating window into the man’s rise and the development of his career. The earliest entries for shoes and boots he made are in Dutch. Later, entries for legal services are in English.