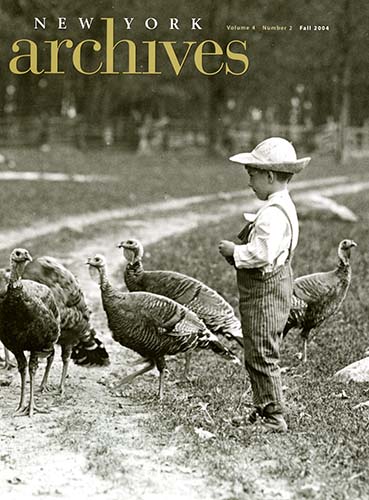 September 11th, 1814
Colonel David Fitz-Enz
Both the British Army and Navy invaded a tiny outpost of democracy in northern New York. But their American opponents turned the tide of the War of 1812.

Look for the Union Label
Kenneth Bartowski
A designer’s dream: these original insignia were adopted by labor unions after an 1889 law allowed them to register their labels, names, and brands

Acrimony in Albany
Jeanne Finley
Albany was the locus of natural history research and discovery in the mid-1800s, as well as the site of a sensational trial over scientific authority

Recording the Missing
James A. Rossetti
Out of the terrible events of September 11 came a critical records management challenge—and its unique solution

Buffalo Goes to War
Gretchen E. Knapp
World War II put western New York to work again, but it changed both the land and the futures of its residents

SPECIAL SECTION
Partners in Success 2003–2004: Where History Goes on Record
The unique collaboration between the State Archives and the Archives Partnership Trust helps preserve and present New York’s recorded heritage, in Albany and throughout the state

Politics and New York’s Electoral College have always gone hand in
hand, from the earliest days of state government to the supremacy
of the two-party system. Blame it on the Constitution…

If you look closely at the fine print on the ballot at your polling place on November 2, you might see this short phrase atop the list of names of presidential candidates: “Electors for… .” This means that although you’ll be voting for the candidate of your choice, you’re doing so via a slate of designated citizens who, well after the popular vote has been counted and the winner declared, will gather on December 13 in states across the country to actually elect the next president and vice president of the United States.

The large group to which these electors belong was established by the U.S. Constitution, and is called the Electoral College. While its electors confirm the decision made by the people in each state, they must also honor their pledge to cast their votes for the candidate chosen by the political party that also chose them. So when we vote for president, we are actually voting for strangers who have been selected by that party to elect a candidate for us.

Eyes on the Prize
It’s complicated, legal, local—and eminently political. Each state and the District of Columbia has its own Electoral College; the number of a state’s electors is equal to the number of that state’s congressional representatives (which reflects population) plus senators (two per state). New York currently holds thirty-one of the nation’s 538 electoral votes. Its Electoral College is one of the oldest and largest in the country, and its history exemplifies, through the commonly used “winner-take-all” method, the advantage that the presidential election system extends to the two major political parties, Republican and Democrat.

The winner-take-all system, used by every state (except Maine and Nebraska) and by the District of Columbia to transform its popular vote into electoral votes, allows the candidate (and by default, the party) who wins the most popular votes in a state in November to receive all of that state’s electoral votes at the December Electoral College meeting. This works to consolidate the major parties’ power, since minor parties rarely receive electoral votes. But it is also a “loser-gets-nothing” method: a candidate who fails to win in a particular state receives no electoral votes at all in that state, no matter how many popular votes he or she has actually gotten. For example, independent candidate Ross Perot (whose Reform Party was not created until after the election) won 19% of the national popular vote in 1992, but received not a single electoral vote.

Knowing there’s an ultimate “prize” to this system greatly boosts the influence and power of the two major parties, and helps them gain support for both candidate and party during campaign season. With their superior state and local organizations and financial resources, Republicans and Democrats have an easier time winning a state’s popular vote than do smaller parties and independent candidates.

Making the Most of the Meeting
The Constitution protects the right of each state to determine how to appoint electors—a rule ultimately advantageous to major parties. New York’s history illustrates this well. The state legislature chose electors for the first few elections, a practice that allowed partisan differences to divide the state’s electoral votes among different candidates. Then in 1788, the Assembly and Senate could not agree on a slate of electors, which prevented the state from participating in the first presidential election. In 1828, New York’s districts chose electors, but this also led to a split vote. Since the adoption of the winner-take-all method in 1832, a single party has won all of New York’s electoral votes each election.

The actual Electoral College meeting in each state (which follows the presidential election) also benefits the major parties, providing an opportunity for consolidation and exercise of party power at best—and unabashed grand standing at worst. In 1893 and 1897, electors introduced resolutions supporting candidates for the U.S. Senate. In 1889, patriotic Republicans mustered a 100-gun salute after the balloting. (Congress moved the date of the electors’ meeting to January of the following year in 1887; in 1934, it was moved back to December). The meeting also sets the stage for future party wins by showing the strength and support of the parties.

In New York, along with a few other states, state party committees appoint electors, generally party leaders and loyalists. Horace Greeley, founding editor of the New York Tribune and early leader of the Republican Party, was a New York elector in 1864. So was abolitionist Fredrick Douglass, a Republican who voted at the 1872 meeting and delivered New York’s votes to the president of the U.S. Senate. Elector Horatio Seymour, former Democratic governor of New York and early presidential candidate, said of the contentious defeat in 1876 of popular vote winner Samuel Tilden by Republican Rutherford Hayes, “The Democratic Party, conscious of its strength and the justness of its position, and feeling that future power is theirs, will do no unwise nor unpatriotic act which will destroy its heritage.” John Jacob Astor balloted at the 1880 Republican meeting, as did piano manufacturer William Steinway in 1893 and George Eastman of Rochester in 1901.

A Charitable Tradition
Even the meager pay electors still receive for attending the meeting has been subject to politicking. Democratic electors of 1913 began the tradition of donating their Electoral College earnings to charity when they gave their $15 stipends and mileage reimbursements to three Albany hospitals. Electors at each of the four Franklin Roosevelt election meetings from 1932 to 1944 sent their money to the Warm Springs Foundation for Infantile Paralysis in Georgia, while 1992’s and 1996’s electors made contributions to the Children’s Aid Society and Gay Men’s Health Crisis, respectively. In 2000, they gave to Senior Services of Albany through the United Way.

In 1917, Republican electors declined to follow this practice and decided not to donate their stipends to charity. According to the Albany Times Union, one anonymous elector said, “We’ll have nobody vote our money to anything or anybody. We’re just against the principle of the thing.” The newspaper reported that electors “pocketed their checks and went home.” But in 1972 and 1980, Republicans donated their stipends to Eisenhower College, and in 1984 they gave their pay to Catholic Relief Services for famine relief in Ethiopia.

Questioning Their Existence
At the meeting, New York’s electors have also traditionally announced their positions on Electoral College reform. In 1936, elector Daniel S. Quigley was ready to submit a resolution for the state’s electors to condemn the Electoral College and call for election by popular vote, but was dissuaded from doing so after a request by Secretary of State Edward Flynn. As host of the state’s 1944 meeting, New York Republican Secretary of State Thomas J. Curran supported elimination of the Electoral College. In his speech before the Democratic electors, Curran asserted that this would likely be the last such gathering, since so many Americans regarded the procedure as outmoded. Elector Alice Campbell Good, however, attending her fourth meeting, disagreed with Curran’s viewpoint, explaining that she had “always felt that the Electoral College was one of the finest examples of…checks and balances in state government.”

In 1968 and 1972, Republican Secretary of State John P. Lomenzo argued for keeping the Electoral College but removing the independence of electors and the House contingency procedure outlined in the Twelfth Amendment (which, in case of no electoral majority for a presidential candidate, allows each state delegation in the House of Representatives one vote to choose from the top three candidates). Several Democratic electors at New York’s 2000 meeting also favored amending the system. Elector and Attorney General Eliot Spitzer proposed several reforms to state election law, including same-day registration, a database of registered voters, and modernized voting machines.

Our will—and our votes—remain to be counted in 2004. While those votes may go to unnamed electors, every person’s vote still matters in a system where the candidate with the most popular votes in each state moves ahead in the electoral vote tally. But the biggest winners in this process are the major parties, aided by the Electoral College—an unintended consequence of the freedom given to the states in the process of electing a president.

Sources for this article included documents, news articles, electoral meeting proceedings, interviews, books, journals, election tabulations both historical and contemporary, and state and federal election guides and procedural manuals. Particular collections of the New York Department of State, Electoral College, and the State Board of Elections in the State Archives and State Library were especially helpful.