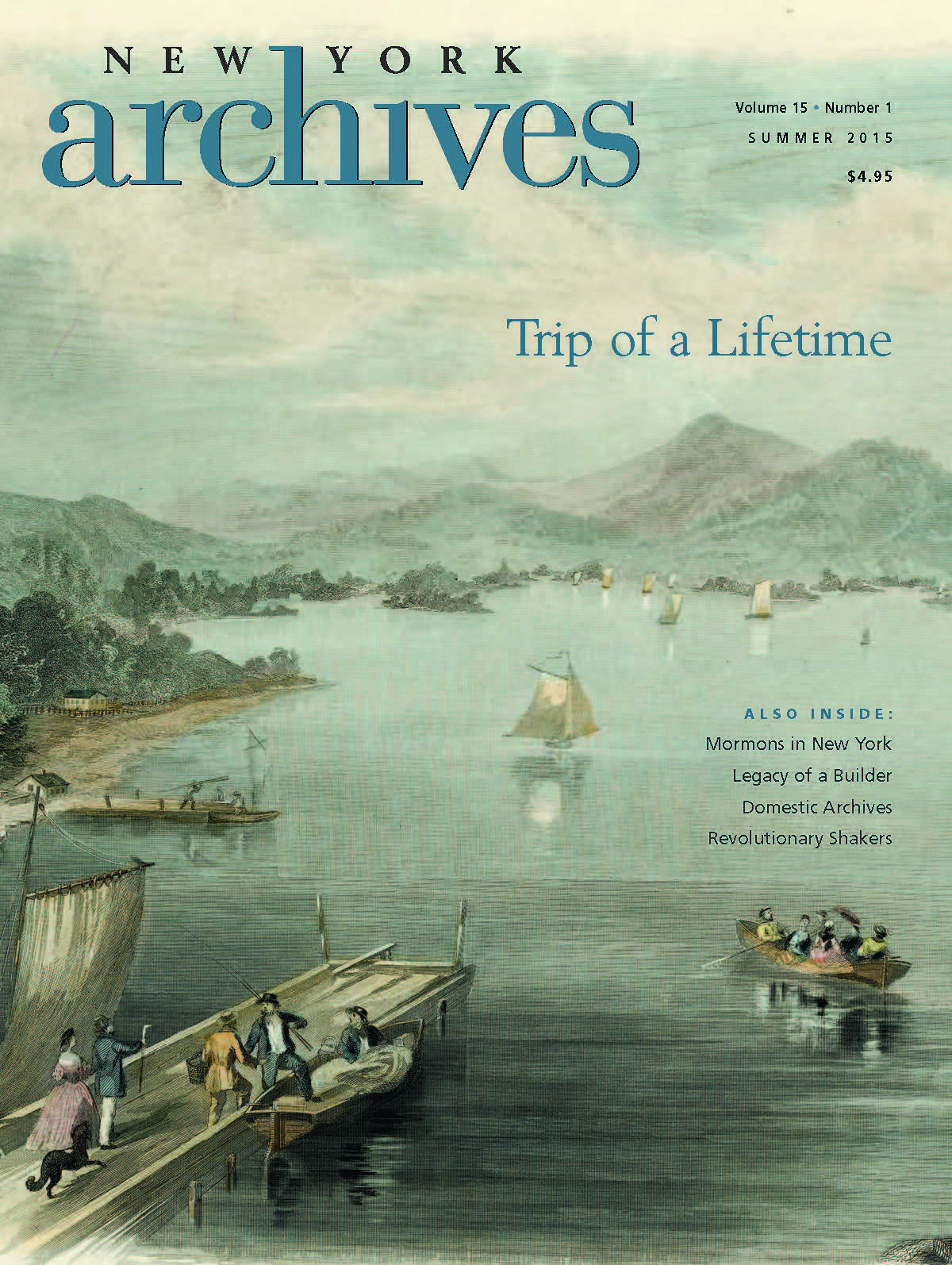 Expedition New York
Matthew DeLaMater
An 1826 diary by a young law student chronicled his 1,700-mile journey from Canada through upstate.

Pilgrimage to History
Spencer W. McBride
New York is as important to the Mormon church as Mormonism was to the development of the state.

Homemade Archives
Ellen Gruber Garvey
Personal scrapbooks allow us to read over their makers’ shoulders for a unique view of time, place, and sensibility.

Quiet Revolutionaries
Lisa Seymour
A major exhibit on Shaker culture illustrates the independence of this religious sect that was born in New York.

In nascent America, the small group of religious believers called Shakers began their own revolution of values, lifestyle, belief, and economics. Now a major exhibit illustrates their cultural endurance over nearly four centuries.

In 1783, the justices of the town of Richmond, Massachusetts, alarmed about the activities of Ann Lee and her small but growing group of followers known as “Shaking Quakers” or Shakers, concluded that “[t]hey appeared to be con­scientious, and acted upon religious principles; yet they deluded the people, and disturbed the inhabitants, and they must be taken care of, or they would turn the world upside down.”

The Shakers: America’s Quiet Revolutionaries is a major exhibition, recently opened at the New York State Museum in Albany, about the United Society of Believers in Christ’s Second Appearing (the group’s formal name). A collaborative endeavor between the State Museum, the Shaker Museum | Mount Lebanon, Hancock Shaker Village, and the Shaker Heritage Society, the exhibition draws upon the collections and curatorial expertise of the partner institutions to examine the Shakers as not only producers of highly collectible decorative arts pieces, but as a complex society which, in seeking a utopia, redefined family, governance, gender roles, and even productivity in ways that countered or outright rejected the values of the newly formed American nation. When slavery was common, Shakers at Watervliet may have assisted some to escape; while the Age of Jackson celebrated individ­ual liberty, the Shakers praised obedience to leadership; and during the Victorian era, when women were idealized and bound by convention, Shaker sisters managed industries and economies.

The Believers
The fledgling religious group encountered rising political and social tensions upon their arrival in New York City in August of 1774 and their subsequent move to Niskayuna, outside Albany, in 1775. In the summer of 1780, Shaker David Darrow and two others were discovered moving “a Number of Sheep.” They were brought before New York State’s Commission for Detecting and Defeating Conspiracies on July 7; the commission concluded that “there is the greatest reason to suppose from their disaffection to the American Cause that they mean to convey them to the Enemy...” British-born founder Ann Lee, accused of being a witch and spy, was met with mobs and violence in many of the towns she visited in New England on her missionary journeys from 1781 until her death in 1784. Nonetheless, pockets of receptive listeners amassed. In 1795, the Believers at New Lebanon, New York signed the Covenant of Joint Interest and Union and embarked upon the great experiment in communal life that continues today at Sabbathday Lake, Maine, the last active Shaker community.

Joseph Meacham, Ann Lee’s successor, devised and oversaw the gathering of communities into “gospel order,” the hier­archical structure that came to define Shaker life. Each village, or community, was comprised of several “families,” with two pairs of male and female leaders overseeing both spiri­tual affairs (elders and eldresses) and temporal or business and domestic affairs (deacons and deaconesses). The family was the basic social and economic unit of the community, and members of families were sometimes, though not nec­essarily, biologically related. The Lead Ministry at the New Lebanon community became the “center of union,” the seat of Shaker government and spiritual leadership. Meacham and Lucy Wright, whom Meacham elevated to the title of Mother as his first act of leadership, sought to unify the geographically dispersed and diverse body of membership, as well as expand the reach of Shakerism into the American West. From the central ministry at New Lebanon, rules and regulations pertaining to nearly every aspect of work and daily life were issued with the goal of keeping all Believers in union, which to them meant spiritu­ally bonded: united to one another, the Church, and to God. Yet each Shaker village developed a unique identity and followed the rules as the family’s leaders saw fit. And though women did not enjoy equality in the modern sense, the power held by Lucy Wright and the leadership positions held by generations of eldresses and deaconesses stand in marked contrast to the lives of their contempo­raries in the world.

All Shakers, including members of the ministry, were expected to work in support of the community, but work was not to be an excessive strain. A six-tub clothes-wash­ing machine, built and later patented by the Shakers, attests to the size of the typical Shaker family, which could consist of as many as 150 people, and to the ingenuity of Believers who strove to make their chores less labor-intensive. Communal living also allowed the Shakers to consume a rich and varied diet once the communities were well established. They grew and ate many fruits and vegetables but also enjoyed doughnuts, maple sugar cakes, and popcorn balls. Though members were urged to seek medical care from practitioners within the community, Shaker medical practice did not differ significantly from that of larger society. For example, Eldress Emma Neale of the Mount Lebanon community was the subject of a phrenology read­ing performed in 1880 (phrenology is a pseudo-science in which the contours of the skull are measured and inter­preted to reveal the subject’s character), indicating that the Shakers were not immune to the fads of the world.

The Shakers enjoyed exceptional longevity. They attributed this to fresh air, the cleanliness they maintained in living and working spaces, and the practice of celibacy. Yet the communal lifestyle, which allowed the sick, elderly, and infirm to work as much as they were able and ensured plentiful food, clothing, and shelter to all who came into the community, surely played a significant role. Shaker life was intended to be heaven on earth, and so it may have seemed to those willing to sacrifice personal independence.

Beauty and Utility
Shakers are perhaps best known for their design of material objects, united by the qualities of outstanding craftsmanship and composition of only fundamental elements. Details like the graceful shaping of the cross members of a grading rake (used to smooth and level soil), or the elegant carving of a hat shaper, suggest that the beauty of these objects was the result of the Shakers’ reliance upon the purest essence of form. A chrome-yellow lap desk reveals that the Shakers embraced brilliant colors and that functionality was not the sole consideration in the creation of furniture or even utilitarian pieces.

Indeed, Shakers made an extraordinary variety of goods for sale to the world, informed by their religious principles and aided by the wealth of resources that combined to produce them. Shaker com­munities used the wealth contributed by members to acquire large land holdings. Agriculture was the foundation for Shaker life and commercial enterprises, and communal life provided another advan­tage: unlike many of their rural contemporaries, the Shakers could afford to engage in experimental practices and purchase or fabricate the most modern and efficient equipment. The Shakers long sustained their communities by the production and sale of garden seeds, medicinal herbs, brooms, chairs, and “fancy goods” (objects made for sale rather than their own use), including satin-lined sewing baskets. The society earned a reputation for the high quality of their goods and also evolved their marketing strat­egies, selling their wares first by peddler wagon and later by mail-order catalogs and stores operated within the communities.

Christians in Community
The Shakers were distinct from other Christian denomi­nations in that they believed in the dual nature of God as a spirit that encompassed both male and female quali­ties. Moreover, they were Millennialists, though that does not mean they awaited the world’s end. Instead they believed that the second coming of Christ had already occurred, and that Mother Ann Lee was the first to be imbued with the Christ Spirit. The second coming, or millen­nium, was available to anyone who lived according to the teachings of Mother Ann in the Shaker Church. Each Shaker had to regularly confess his or her sins, practice celibacy, and place the community above one’s self. While these beliefs have not changed a great deal over time, many religious practices have. Though the society was long known as the “Shaking Quakers,” they are not, in fact, Quakers, though they share a common style of worship that does not include sermons or ministers: each member may speak, or give testimony, as the spirit moves him or her. Early in their history they performed uncontrolled, spiritually inspired movements that gave the sect its nickname; in the 1790s, they began performing highly choreographed dance movements and marches that continued until the twentieth century.

Though the Shakers always practiced spiritualism, or communication with the spirits of the dead, the practice was at its height during the Era of Manifestations, the religious revival undergone by the Shakers in the 1840s. Members received messages from Holy Mother Wisdom, the Heavenly Father, and Shaker leaders who had died, such as Mother Ann Lee and Mother Lucy Wright. These messages might take the form of songs, dances, hymns, poems, or drawings, commonly called gift or spirit drawings. During this time, meetings were held on “feast grounds” crowned by fountain stones. These twice-annual meetings, which unlike regular meetings were closed to the public, saw the resumption of some of their earliest practices, including trembling and shaking. In the twentieth century, Shaker religious practice evolved from energetic dance performances to quieter and deeper expres­sions of faith, but Shaker meetings today are once again open to observers from the outside world.

The Shakers are justly celebrated for their furniture and other decorative arts. But perhaps their greatest legacy is their role in, and influence upon, American cultural iden­tity. Long before these acts were common, they practiced responsible stewardship of land and animals, elevated women to positions of leader­ship, and accepted members of all races and ethnicities. Most importantly, their communal lifestyle demanded placing the society and God before oneself; yet by pooling resources and labor they provided security to their members a century before the “social safety net” was estab­lished and allowed an individ­ual’s natural talents and creativity to come to fullest fruition. The values they embraced in the eighteenth and nineteenth centuries were seen as an attempt to “turn the world upside down,” but their communities were formed in part to serve as an example to the world. Perhaps, over the centuries, they have done so.

Displayed in Quiet Revolutionaries are artifacts and documents from two important reposi­tories of Shaker material: the New York State Library’s Manuscripts and Special Collections, and the Emma B. King Research Library at the Shaker Museum | Mount Lebanon. The State Library has contributed two elegantly written works by Elder David Austin Buckingham, a biographical essay on Mother Ann Lee, and a grammatical diagram, as well as examples of inden­ture forms, documents signed by parents who brought children to be raised in the Shaker communities. The State Library holds about fifty of these indentures.

The Emma B. King Research Library has contrib­uted rarely seen original documents like an 1802 travel diary kept by Benjamin Seth Youngs, a Bible once owned by Mother Lucy Wright, and Emma Neale’s phrenology reading. The library has also furnished many of the exhibition’s historic photographs.