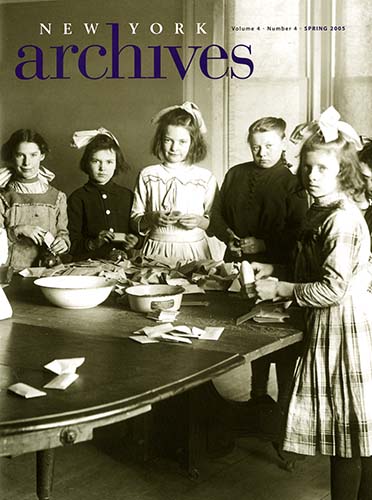 The One-Legged man
Russell Shorto
An excerpt from the author's best-selling book on the history of Manhattan offers a very personal view of the New Netherlands' fist governor, Peter Stuyvesant

The Castle of Cures
John W. Crowley
A nineteenth-century doctor/reformer believed that alcoholism could be cured—and built a Gothic Revival castle in Binghamton that he hoped would prove it

Navigating the Deep
Margaret B. Schram
The eighteenth-century seaport of Hudson wasn't in New England.  It was New York, 120 miles from the Atlantic Ocean, and its biggest industry was whaling.

Dear "Mrs. Publisher"
Laurence M. Hauptman
One of the country's first female newspaper editors brought news of the Civil War to the Hudson Valley and made both journalism and women's history

By Margaret B. Schram

The City of Hudson's maritime past rivals that of a New England seaport: a prosperous whaling, shipbuilding, and cargo industry—all 120 miles from the Atlantic Ocean.

At the end of the war, Britain, Nantucket's major market, had slapped a heavy tariff on the importation of whale oil into that country, rendering profit impossible. As a result, many American whaling masters and their crews departed for Britain to join the growing British whaling fleet, although others remained steadfast to their homeland. A group of the latter formed an organization founded on equity, and called themselves "proprietors." Originally eighteen men, later expanding to thirty, the majority were members of the Society of Friends, generally called Quakers. These men determined to locate and establish a commercial settlement on the American mainland that would be suitable as a shipping port and free from the danger of foreign invasion. They sought a location surrounded by land that could supply quantities of timber, grain, and other foodstuffs for trade with southern and Caribbean ports.

These proprietors signed Articles of Agreement promising that they would obey the rules and regulations of the future settlement and guaranteeing that they were all merchants "concerned with navigating the deep." A pooled sum of up to $100,000 was made available for land purchases and other expenses. All promised to relocate to the new settlement before 1785.

Location, Location, Location
Claverack Landing had many advantages as a shipping port. Deep water ran right up to the land's edge, offering mooring close to shore for vessels of all sizes. The surrounding countryside, extending far into Massachusetts, could furnish an ample supply of forest and farm products. A bonus was the freedom of the Claverack Landing folk to dispose of their properties; the landing was part of the 1664 Van Hoesen grant, which was outside the Van Rensselaers' jurisdiction and thus free of manorial restrictions.

The proprietors--the Jenkins brothers among them--purchased the landing parcel by parcel and soon began to arrive with their families (and, in some instances, the frames of their future homes). The new settlement was named Hudson. Committees were formed to plot the future city, divide it into building lots assigned to a proprietor, and plan and construct roads. Those proprietors who were "concerned with navigating the deep" brought fleets of vessels-schooners, brigs, sloops-that were immediately consigned to the coastal and West Indies trade, and whaling vessels sailed for the South Atlantic whaling grounds.

The waterfront along the western side of Hudson was divided among eighteen proprietors into water lots, each one extending some distance into the river. The first shipyard soon opened, beginning an active shipbuilding industry that would see more than seventy-five new vessels leave Hudson's yards between 1784 and 1827. By 1785, twenty-five vessels were owned by the settlement, making the new port of Hudson second only to New York City in shipping in the state. That year the proprietors also incorporated the settlement with a charter that required a mayor, a common council, and a full set of officers to oversee and manage municipal affairs, although most of those offices were held by the proprietors.

A Vibrant Whaling City
By 1786-just three years from the time the first proprietors set foot on the landing-a vibrant city thrived on the river's edge. Wharves, four large warehouses, a ropewalk, and a ducking factory (that made the material for sails) were among the many enterprises run by the proprietors. As Hudson's fame spread, other businessmen and scores of workers moved in. Many families from other Quaker communities cast their lots with the new city.

The first documented whaling vessel out of Hudson was the Claverack , sailing in 1785 for the Brazil Banks. The Hudson , built in Hudson's own shipyards, also sailed that year under Master Robert Folger. From 1785 to 1796, sixteen whaling vessels left the city for the whaling grounds. The oil brought home from the whaling voyages was refined into lamp oil or made into candles at local factories. Many of the whalers were also involved in sealing, either exclusively or in combination with whaling. The importance of seal hides to Hudson was indicated by the numerous tanneries located there. Shoe leather was made from seal hides, as well as from cattle hides harvested in the city's slaughterhouses.

In 1795, Hudson was designated a Port of Entry, and a custom house with custom officers was located near the docks. The city had jurisdiction over vessels south to the Catskill Creek and north to Albany.

However, Hudson's remarkable prosperity, achieved in so short a time, would soon falter. When the United States signed the Jay Treaty with Britain, which allowed reciprocal commercial relations between the two nations, France considered it a violation of their own 1778 treaty with the U.S., which promised American aid to France in the event of war and was a precondition for French help during the Revolution. In 1797, France turned its warships loose on American vessels. Over 300 American ships, along with their cargoes and crews, were confiscated, including the Hudson whaler American Hero. Known to history as the Quasi-War (because war was never declared), this strictly maritime conflict ended in 1800 with France's commerce in the West Indies destroyed.

More trouble followed. War between France and Britain smoldered and flared, leading to blockades of ports by each country. America declared neutrality, and her ship owners, including those in Hudson, became wealthy carrying food and raw materials to European ports. Britain's heavy-handed impressment of seamen from American ships, however, was a constant irritant. Facing an insupportable situation, President Jefferson imposed the Non-Importation Act in 1806, followed by the Embargo Act in 1807, which prohibited American vessels from sailing to foreign ports and even restricted coastal trade. This was the death knell for Hudson's shipping industry. Both acts were repealed in 1809 and replaced by the Non-Intercourse Act, which limited the constraints on trade to a prohibition on trade with Britain, France, and their possessions, but the damage was done.

The Shipping News
The shipping charts of Hudson bear out this distress. Prior to 1797, countless vessels left Hudson for Europe and the Caribbean. By the start of the nineteenth century, far fewer voyages were logged, and those were confined to other Hudson River ports. Whaling had virtually ceased. No whaling voyages were reported from 1798 until 1802, when only four were listed. 1803 saw just four whale ships depart Hudson. Strangely, shipbuilding continued, with twenty-seven ships, seven brigs, and four schooners built between 1798 and 1807.

Yet the city continued to grow. By 1800, the population had reached 4,048. Two 1803 libel trials involving the editor of Hudson's Federalist newspaper, turnpike construction, Robert Fulton's steamboat, and the 1805 relocation of the Columbia County seat from Claverack to Hudson kept residents and the economy energized.

War fever was growing, however, and Hudson's common council ordered a powder house to be built. War was finally declared in 1812, causing further disturbance to the city's seafaring businesses, but there was little respite when the war ended in 1814. In 1815, Hudson lost its designation as a Port of Entry; all vessels from the Hudson River would henceforth register in New York City. The opening of the Erie Canal in 1825, giving access to limitless forest and farm products, further sealed the port's doom: trade now bypassed the city on its way from Albany to New York.

The five whaling voyages from Hudson between 1815 and 1819 marked the end of the city's whaling ventures until 1829, when stocks were sold to form the Hudson Whaling Company. The principals reasoned that, since Hudson had once been a whaling port, the industry could succeed again, even though the city no longer had the ships, the experienced whalemen, or the business to supply and support the vessels. But the company and a few hardy individuals raised funds to purchase ships and convert them into whalers. Shipmasters, mates, and harpooners were hired from coastal whaling ports. Crews could be picked up en route, or local boys could be trained. The whaling company's agent was the firm of Barnard, Curtiss Co., which also operated a whale oil and candle factory located near the present Hudson train station. Soon twelve refitted whalers sailed from Hudson.

At first the voyages were successful. Then misfortunes accumulated. A leaky ship was condemned. A shipmaster was drowned when he was pulled overboard by a fouled line, and the unlucky ship was sold. Another ship sank. Cargoes of oil grew smaller and smaller. The greatest blow was the financial depression of 1838. By 1842, only two whale ships remained active from Hudson, the rest having been sold to New England ports. The last two were sold in 1845.

Like the Tide, Fall, Then Rise
This failed attempt to revive Hudson's whaling industry nearly destroyed the city's economy, which was further shaken by a series of disasters. A financial fiasco with a Hudson-Berkshire railroad added to fiscal woes. Over 12,000 acres of the city were lost when the Town of Greenport was formed in 1837, leaving Hudson with only 1,600 acres in which to further expand. Two huge fires-one in 1838, another in 1844-destroyed most of the busy southwestern section of the city. When the Hudson River Railroad sought a right-of-way through Hudson in 1850, the citizens opted to have the tracks placed along the riverbank, all but shutting off easy access to the river, the source of the city's early prosperity. By 1850, only an occasional steamboat docked at the once-busy port.

There would be other booms and other busts for Hudson over the next 150 years. The former "miracle city" would several times be declared a "finished city," but it would always rise again from its own ashes, fueled by a new burst of economic activity. Hudson's current incarnation as a vibrant arts and antiques center with soaring real estate values owes no small debt of gratitude to those eighteenth-century proprietors who sailed upriver and, far from the sea, built a seaport on a hill.

[Sidebar]
Fifty years of collecting books on local history, as well as reference books on whaling, provided a personal archive that made research convenient for my book, Hudson's Merchants and Whalers: The Rise and Fall of a River Port, 1783-1850 (Black Dome Press, 2004). Three outside sources proved to be invaluable. At City Hall in Hudson, I came across a microfilm titled Proceedings of the Common Council of Hudson, 1785-1930 . In the Hendrick Hudson Chapter of the D.A.R. Library, I found a notebook entitled "The Maritime History of Hudson, N.Y.", writer unknown. This appears to be notes for a college thesis, and contains extensive lists of Hudson ships with their dates of construction, cargoes, and ports of call. The greatest treasure was found at the Vedder Research Library at the Bronck Museum in Coxsackie: a handwritten, bound ledger titled Annals of Hudson, containing copies of pages from the Hudson Weekly Gazette from 1786 to 1790, as well as personal recollections by well-known early Hudson residents. The shipping news from the Gazette listed all vessels leaving from or arriving in Hudson during those years.