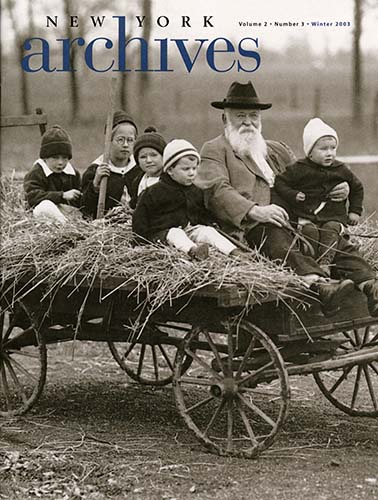 Curación en el Norte ("The Cure" in the North)
Amy Catania
Wealthy Latin Americans traveled to Saranac Lake to treat and cure their tuberculosis, bringing Latino culture with them

The Greatest Good
Suzanne Meredith
The Endicott-Johnson Company's benevolent corporate philosophy ruled not only commerce but also Endicott, the town "built by an idea" in New York's Southern Tier

"...To Speak of Myself to Others..."
Sheila Edmunds
The achievements of Fort Lewis Seliney, advocate for the deaf and co-founder of the New York State School for the Deaf in Rome, were nearly lost in history--until now

Nuggets in a Gold Mine
Paul Grondahl
In the archives with author and biographer Joseph E. Persico, whose research has yielded critical discoveries about FDR and World War II

One quiet night in the summer of 1931, a US Coast Guard cutter named the Black Duck cruised the waters off Long Island. Its mission was to intercept any boat bringing liquor to Long Island's shores—an illegal cargo during those days of Prohibition. Suddenly the speedboat Artemis, loaded down with cases of bootleg liquor, appeared out of nowhere. The Artemis had been captured by the Coast Guard three times, and each time it had been put back into service by its rum-running owners. But this night the Artemis rammed the Black Duck's bow, ripped a hole in its side, and disappeared as quickly as it had come. The cutter's captain pumped over 500 rounds of machine gun fire after the fleeing speedboat.

Open-water chases, gun battles, shipwrecks that left stray bottles of liquor along the shoreline (where they were snatched up by opportunistic locals)—all were part of everyday life on Long Island during the thirteen-year national experiment known as Prohibition, which began with passage of the Volstead Act in 1920 and ended with its repeal (to the relief of a thirsty and frightened populace) in 1933.

The Coast Guard's job was a risky, thankless one: many of the rum runners navigating Long Island's waters were equipped with more powerful engines and better firepower than the Coast Guard fleet. And the bootleggers had many sympathizers among the local populace. Jim Flemings, a former Port Washington harbormaster and the son of a well-known boat captain of the same name, noted in a 1990 oral history that the bootleg boats' biggest "claim to fame was speed." He recalled that one such rum runner, the sixty-foot Baby Bootlegger, was "famous…up and down Long Island."

The area was a siphon for, and a major consumer of, the alcohol that flowed to New York's speakeasies during the Roaring Twenties and early Thirties. Long Island's 1,180 miles of coastline—jagged with bays, creeks, and deserted beaches—and its long flat highways became vital delivery routes for Prohibition profiteers. And although Chicago had Al Capone and Elliot Ness, Long Island had its own notorious bootleggers like gangster Dutch Schultz, as well as fearless federal agents like Izzy and Moe who gained national attention with their speakeasy-busting exploits.

Long Island in those days little resembled today's landscape of malls, expressways, and single-family houses. Post-World War I Long Island was home to 500 grand estates whose owners threw lavish parties renowned for their opulence and overindulgence. These high times were immortalized by F. Scott Fitzgerald in his Tales of the Jazz Age and The Great Gatsby, the latter written in an apartment in Great Neck where Fitzgerald lived in the early 1920s. By 1931, Long Island was rife with speakeasies that were regularly raided by the district attorney's men. One example of a law enforcement campaign was a series of raids conducted that same August in 1931 that saw the Black Duck/Artemis confrontation. According to The Long Islander weekly newspaper, some two dozen deputies from the Suffolk County District Attorney's office "mopped up" ten speakeasies in the Town of Huntington on the north shore.

On the south shore, some famous faces could be found in the shadows, sipping booze and rubbing elbows in speakeasies whose owners—Texas Guinan was one—were just as famous. According to Long Island: Our Story, entertainers in such speakeasies included Paul Whiteman, Guy Lombardo, and a young crooner named Bing Crosby.

With its proximity to New York City and a surplus of customers, Long Island was perfectly situated to become a major bootlegging center. Although brewing beer and making rum were illegal in the United States, rum running became popular—and possible—because Canada to the north and the West Indies to the south were willing suppliers of the booze that fueled the Jazz Age. Schooners and freighters anchored in international waters just off Long Island's shores constituted a flotilla of floating liquor stores, and the area became known as "Rum Row," a freewheeling liquor market with its own peculiar rituals. Some sellers required buyers to offer a secret signal, often the matching half of a torn dollar bill. A steady traffic of fishermen, followed by more sinister entrepreneurs, ran the booze to beaches or secluded docks in Montauk, Fire Island, Freeport, Greenport, and Shelter Island.

One of America's most feared gangsters, Dutch Schultz (born Arthur Simon Flegenheimer in The Bronx), was active on Long Island. Though Schultz met his end in a barrage of gunfire in Newark in October, 1935, he had earlier set up his bootlegging business in Patchogue. That enterprise made Long Island a dangerous place, and honest citizens found it advantageous to ignore the after-dark doings on the local beaches. Gun battles between bootleggers and federal agents made headlines, and a number of lesser- known hoods were found dumped along Long Island's quiet roads, their bodies riddled with bullets.

Long Island shipyards willingly played both sides of Prohibition. Knowing that the Coast Guard boats' top speed was about twenty-six miles an hour, a Freeport shipyard made rum-running boats that were capable of traveling nearly thirty miles an hour even when loaded down with liquor. Rum runners in speedboats equipped with surplus aircraft engines would race the booty to shore. The final leg of the trip to New York City would be completed by high-powered cars fitted with false bottoms to conceal the contraband.

The Coast Guard's duty was to cut the flow of illegal liquor near its source. From January 17, 1920 to December 5, 1933, the Guard was assigned to fight liquor smuggling along Long Island's coastline. According to Ship Ashore, a Record of Maritime Disasters off Montauk and Eastern Long Island, 1640-1955, acting as strongarm in the Prohibition fight was the most "thankless job" ever assigned to the Coast Guard: "That duty caused some friction with the residents of eastern Long Island for the first time in the service's history." Fishermen complained of being hindered by Coast Guard searches, and some Coast Guard men were allegedly transferred for enforcing the Volstead Act a little too rigorously.

Sometimes it was the elements that interfered with smooth delivery of the contraband, providing a bonus to local residents. Just before Christmas, 1922, a schooner named the Madonna V. out of Halifax, Nova Scotia ran ashore near the Napeague Coast Guard Station on Long Island's South Fork and began to break up in the surf. As the rum runners abandoned ship, the schooner's cargo—several hundred cases of choice liquor—was in danger. But not for long. "Lifelong teetotalers and even deacons of the church risked pneumonia in the December surf to bring it ashore, prompted no doubt by the inherited custom of 'wrecking' [salvaging valuable items from a shipwreck] and old New England principles against waste of any kind."

But more often it was the government--G-men and the Coast Guard—who stood between the bootleggers and their profits. These guardians included federal agents Izzy and Moe, two Brooklynites whose racket-smashing exploits rivaled those of Elliot Ness. Postal clerk Isidor Einstein and cigar store owner Moe Smith used both nerve and imagination to make arrests at speakeasies, employing methods like siphoning bootleg liquor into a flask concealed in the lining of Izzy's vest.

By the early 1930s, the tide was beginning to turn against Prohibition. In a speech given in 1931, prominent philanthropist August Heckscher, who two years earlier had donated money to fund the acquisition of Heckscher State Park in East Islip, decried the loss in tax revenue and jobs caused by the Volstead Act. "Prohibition has dislocated trade and politics at home and abroad," Heckscher argued, claiming that Americans were spending $400 million annually on Canadian liquor. Heckscher became yet another prominent American calling for repeal.

In the 1931 case of the thrice-captured Artemis, a combination of Coast Guard skill and local ingenuity frustrated the bootleggers' intents. Irked at the attack on one of its premier cutters, an angry Coast Guard headquarters in New London, Connecticut sent out a 100-mile alert. Guardsmen combed hospitals in both Connecticut and Long Island, turning up two men who had been admitted to an East End hospital with suspicious gunshot wounds. After an intensive search of boatyards, the Artemis was found in Port Jefferson with her hull repaired. Nearby was discarded planking pocked with bullet holes, as well as another plank apparently torn loose and dragged from the Black Duck. The crew that ultimately tried to reclaim the Artemis was arrested, tried, and convicted in federal court, and the boat was impounded, but it was subsequently repurchased from the government—and returned to rum running for the fourth time.

And what of the Artemis' illegal cargo? The bootleg whiskey wound up on a secluded beach three miles west of Orient Point, where it had been surreptitiously transferred to skiffs. Local residents did most of the salvaging, spiriting their loads away in cars or picking their way through the poison ivy-infested bluffs, leaving behind only thirty cases of twice-plundered treasure for the federals to seize.

The Long Island Studies Institute, a cooperative effort between Hofstra University and the Nassau County Division of Museum Services, maintains vintage photographs of Long Island towns, places, and people; rare books on Long Island history; and, on microfilm, a collection of 125 Long Island newspapers dating from the 1800s to the present day. The Institute also holds a copy of the 1930 US Census that covers municipalities on Long Island. The Port Washington Public Library Local History Center collects and maintains reminiscences of Long Island sailors and baymen. Its oral history program, which conducted a 1990 interview with former Port Washington harbormaster Jim Flemings, is directed by Elly Shodell.