Building a Bridge
Enid Gort and John M. Caher
Some lesser-known heroes built bridges between those fighting for civil rights.

Active Dissent
Seth Kershner
In the early 1970s, college protests spread throughout the state and country in answer to the war.

The Judge and the Anarchist
Richard A. Dollinger
How the lives of two intersecting and contrasting Western New York personalities
played out on a national stage. 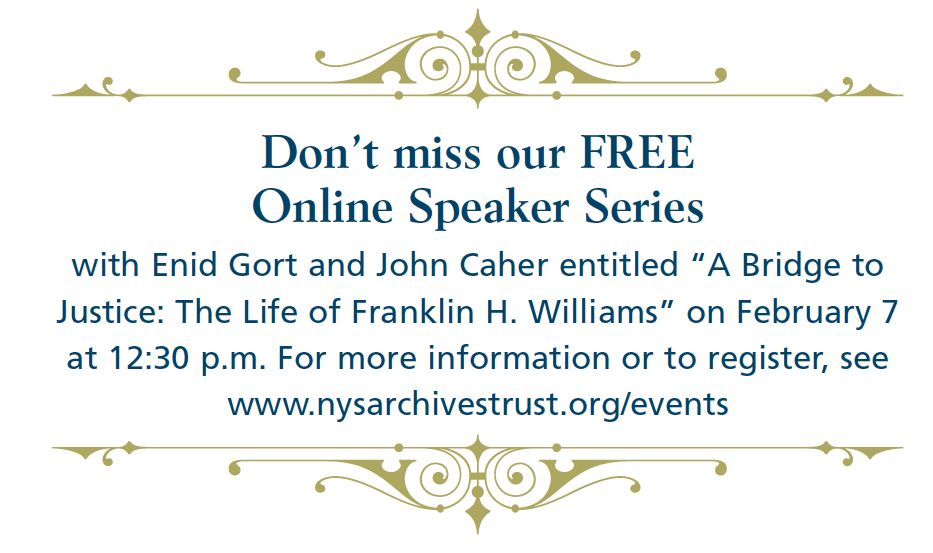 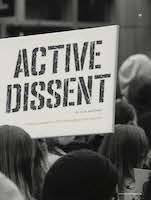 Telling the story of an unsung hero in the Civil Rights Movement.

In July 1949, four young Black men were falsely accused of raping a 17-year-old white girl in Groveland, Florida. Two of the suspects, Samuel Shepherd and Walter Irvin, were apprehended immediately and savagely beaten by police. Another suspect, 16-year-old Charles Greenlee, was captured shortly thereafter and tortured until he confessed to a crime he did not commit. A fourth suspect, Ernest Thomas, read the writing on the wall and fled to the marshes, where he was hunted down by a posse and riddled with hundreds of bullets as he rested under a tree. The coroner’s jury concluded the posse acted in self-defense. It was 70 years before the state of Florida exonerated the young men who were inarguably innocent.

When word of the case reached the NAACP, Thurgood Marshall, the director-counsel of the Legal Defense and Education Fund, dispatched his young associate, an obscure New York lawyer named Franklin H. Williams, to defend the three surviving defendants. In that case, Williams experienced southern “justice” in its most vile incarnation, and barely escaped a lynching. However, his work on Groveland and subsequent cases successfully challenged the admissibility of coerced confessions and laid the groundwork for the US Supreme Court to outlaw the once routine practice of racially stacking juries.

Bridge Figures
Larger-than-life figures such as Thurgood Marshall and Martin Luther King and, going back further, Frederick Douglass, W.E.B. Du Bois, and Booker T. Washington, functioned as the “celebrities” of the equal rights movement, the public face of the crusade for racial justice. But outside the spotlight, “bridge figures” such as New Yorker Franklin H. Williams—men and woman unencumbered by the sometimes blinding “star quality” of the Kings and Marshalls while also shunning the divisive tactics of militants such as Bobby Seale, Huey Newton, and Malcolm X—made enormous but often under-appreciated contributions.

This extraordinary group included comparatively obscure trailblazers like James Farmer, Loren Miller, Constance Baker Motley, Whitney Young, Vernon Jordan, Dorothy Height, and Andrew Young. These were men and women who moved easily in both Black and white society, bridging the gap between the radical revolutionaries and the liberal establishment. Through the power of their intellect and persuasive oratory, they changed not only behavior, but minds. Yet, despite their accomplishments and immeasurable contributions, Williams and the other “bridgers” have generally been relegated to the footnotes of history.

Williams (1917-1990) was a top aide to Thurgood Marshall, a civil rights lawyer, a pioneer, and a diplomat. He built the NAACP in the western third of the country, worked in the Kennedy and Johnson administrations as an organizer of the Peace Corps, and served as a United Nations representative and Ambassador to Ghana. He persuaded large corporations to divest themselves of financial investments in South Africa when that country refused to abandon apartheid, the government-sanctioned policy of racial segregation and subjugation.

His final challenge, chairing in New York the first independent, court-based commission in the country charged with addressing racial and ethnic bias in the courts—now known as the Franklin H. Williams Judicial Commission—remains a vibrant and active legacy to his deeds and influence.

Early Life
From the time he was born, Franklin Hall Donald Lowry Williams lived in a large extended-family household within a middle-class neighborhood in Flushing, Queens. His family consisted of twenty-two people who traced their ancestry back through three or four generations of Black freepersons, runaway slaves, Native Americans, colonial Europeans, and even Black slave owners. Franklin’s great grandmother, a full-blooded Matinecock, was the undisputed matriarch of this blended domicile.

Young “Frankie,” a tall, muscular boy blessed with charisma, good looks, self-confidence, and intelligence, began developing his leadership skills as a youth attempting to mediate disputes in his very diverse home environment. Although Franklin never knew his mother—she died, apparently of a self-induced abortion (according to medical records), when he was fifteen months old—he, according to family and friends, was profoundly impacted by her absence. Throughout his life, he struggled with a fear of abandonment that made him tough and resilient but frequently cold and defensive, traits that psychologists tell us are common in boys who lose their mothers in infancy.

Franklin was fortunate to live in a household with people he loved, and who loved him, but said in an interview that the different shades and backgrounds in his family tree made him question where he fit in society. His earliest years were sheltered, and race was simply never discussed in the home, leaving him totally unprepared for the bigotry he would endure as an adolescent when he ventured outside the family bubble. Suddenly, there were places he could not go, like the local swimming pool, organizations he could not join, like the YMCA, and girls he could not date, like the white girl who had been a childhood playmate. It was baffling and, as a teenager, Franklin confided that he struggled more than most adolescents to figure out where, or if, he belonged. Fortunately, he was admitted to Lincoln University, an historically Black college in Pennsylvania where, as one observer put it, he didn’t have to be Black, he could just be Franklin. It was at Lincoln that Franklin found himself, where he was free to exercise his mind, develop his passion for justice, nurture his natural leadership skills, and begin to shed what he later called an “ingrained sense of inferiority” that afflicted so many African Americans in the Jim Crow era.

Civil Rights Lawyer
Williams became an attorney because he believed the third branch of government—the courts—provided the greatest hope for systemic reform. In a democracy, the political branches are designed to respond to the interests of the majority. The legislative and executive branches exist to represent the collective will of the people. But the judiciary is the counter-majoritarian force, the one branch that stands for individual rights, the one branch that is designed to protect the individual from the tyranny of the majority and the authoritarian power of government. Williams believed in and trusted the rule of law and marshaled the power of the courts to defend innocent men, challenge prejudice and segregation and bring shame and economic consequence on businesses and businessmen that practiced discrimination.

Tension with Thurgood Marshall
Although Williams was a key assistant to Marshall, the two men clashed repeatedly, with the older, wiser, and more strategic Marshall proceeding cautiously and the impatient bull-in-the-china-shop upstart favoring a far more aggressive approach to achieve a measure of racial justice in the courts. Marshall knew an adverse decision, especially from the Supreme Court, would establish a precedent that could set the movement back another generation, so he only took on cases he was confident he could win. He was also reluctant to represent clearly guilty defendants because he did not want the NAACP viewed as an organization that got vicious criminals off on “technicalities,” even if the suspect’s Constitutional rights were egregiously violated. Williams would have taken those risks and was forever pestering his more patient boss to roll the dice. “It was clear he and I were not on the same wavelength,” Williams said in an interview in 1989. The constant tension became unbearable, and Williams was transferred to California, where, no longer under the thumb of Thurgood Marshall, he did the best work of his career in establishing a robust, proactive, and highly effective NAACP presence in the western third of the country.

Ambassador
Around 1960, Williams worked to elect John F. Kennedy and when the effort succeeded, was rewarded with a new position in Washington where he helped Sargent Shriver, the president’s brother-in-law, establish the Peace Corps. He later served as US representative to the United Nations and was ultimately appointed ambassador to Ghana by President Lyndon Johnson. Shortly after Williams arrived in Ghana, its president, Kwame Nkrumah, was ousted in a coup. Initially, Nkrumah and others assumed Williams—his former classmate at Lincoln University— had been complicit in the overthrow. It later became evident (even to Nkrumah) that Williams had not been involved. Yet, to this day there remain some who unfairly and inaccurately view him as a pawn who was sent to Ghana to undermine his former classmate.

Legacy
The story of Franklin Williams is a story of an intellectually elite Black leader in the twentieth century whose behind the scenes work significantly impacted the Civil Rights Movement and civil rights law, and continues to impact the New York State Court System through the Franklin H. Williams Judicial Commission. Under Williams’ leadership, the commission produced a no-holds- barred report that showed the state court system was riddled with bias, discrimination, and an appalling top-to-bottom lack of diversity. More than 30 years later, the commission, now named for Williams, continues to work toward racial and ethnic fairness in the courts.

Granted, we are still crossing the bridge to the promised land of racial justice. But we are crossing it on a bridge that was built in large measure by Franklin Williams and the “bridge figures” of the civil rights struggle. Williams, who often recalled Martin Luther King’s observation that “the arc of the moral universe is long, but it bends toward justice,” knew that the bridge to justice would be painstakingly built brick by brick and crossed step by step.

The Manuscripts, Archives and Rare Books Division of the Schomburg Center for Research in Black Culture in Harlem contains seventy-four boxes of well-organized, meticulously catalogued materials covering every aspect of Franklin H. Williams’ life and career. All of the materials are readily available at the center, a branch of the New York Public Library. Additionally, Dr. Enid Gort conducted dozens of oral history interviews with Ambassador Williams during the last year of his life and augmented those discussions with scores of additional interviews with Williams’ family, friends, and colleagues. Those recordings, and accompanying transcripts, will be donated to the Schomburg this year for public access, in accordance with Williams’ wishes.

Other archival records include 167 pages of unclassified (but redacted) FBI files available through a Freedom of Information Act request. The Williams file, compiled as part of a background investigation when he was vetted for service in the Kennedy Administration, provides significant details on his life and activities.

The New York State Archives contains detailed files relating to Williams’ last professional achievement, the court system’s Commission on Minorities (later named the Franklin H. Williams Judicial Commission). Those materials include notes on statewide hearings the commission held in which witnesses testified to the racism, nepotism, and veritable racial caste system that prevented Black and other minority employees from advancing in the court system.

Franklin Williams has generally been consigned to obscurity. A PBS documentary, “A Bridge to Justice,” and a book of the same title recently released by Fordham University Press (and co-written by the authors of this article), seek to correct historical oversight and tell a story that needs to be told.

For more about civil rights activism in New York State, see:
• “Daughter of the Empire State” by Jacqueline McLeod, Spring 2013
• “The Brothers: A Forgotten Struggle for Civil Rights” by Brian Keough, Summer 2017
• “As No Other Woman” by Lillian Serece Williams, Spring 2021