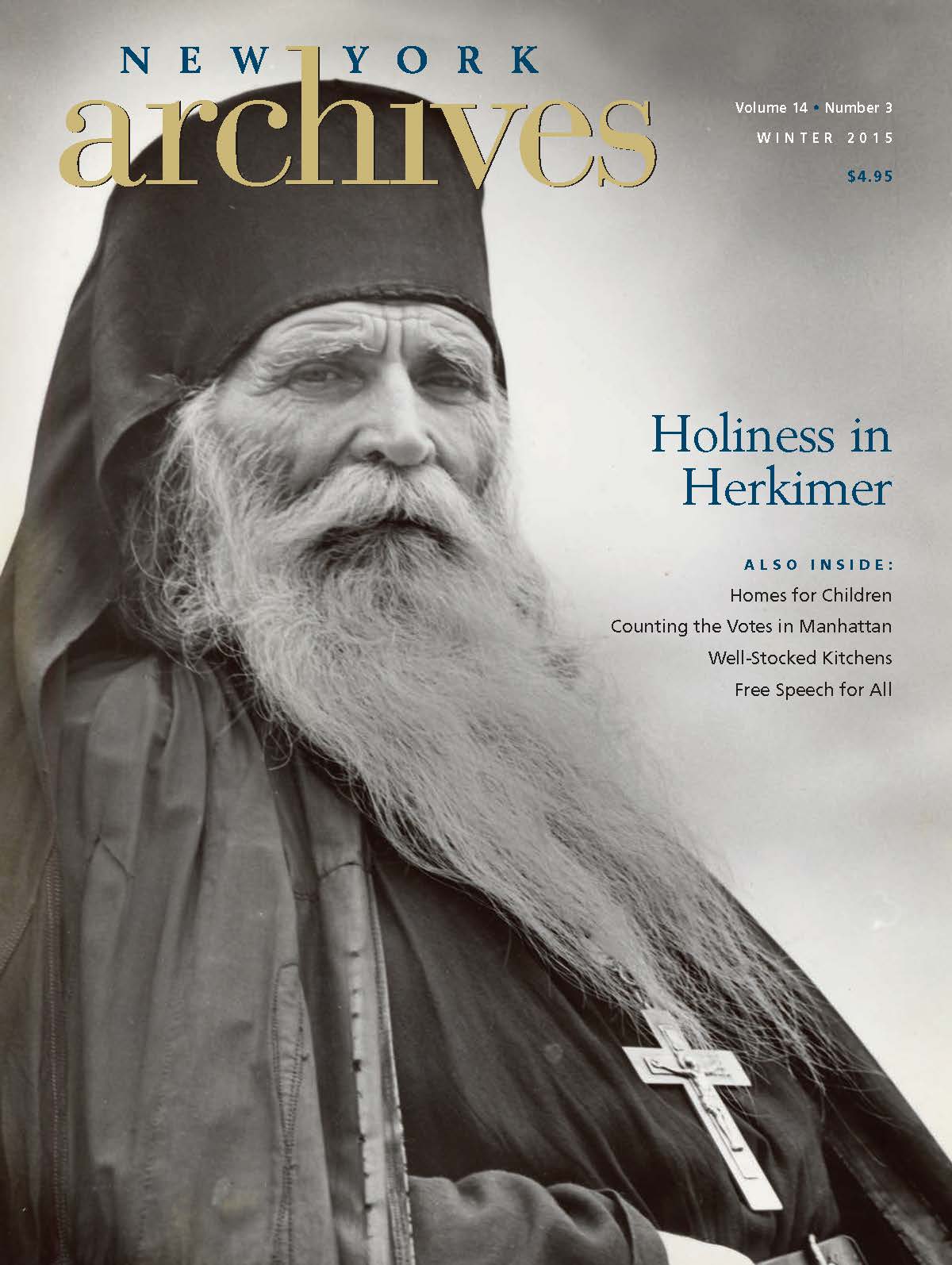 Russia Upstate
Bryan Herman
The golden onion domes of a sprawling Russian monastery are part of the landscape of rural Herkimer County.

Trains to Home
Gail Mahoney
Destitute children were transported from Manhattan to the Midwest on “orphan trains,” a social reformer’s solution to their poverty and homelessness.

A Breach of Peace
Nick Thony
Free speech was sorely tested in Albany on the eve of the Civil War when the abolitionists came to town.

A sizeable monastery complex located in a Herkimer County hamlet is a hub of Russian language and Orthodox religious culture—and history.

As a Russian historian, I rarely come across New York-centered stories, so it was both jarring and impressive to encounter the elaborate golden onion domes and intricate mosaics of Holy Trinity Monastery while driving along Route 18 or State Route 167 near the hamlet of Jordanville (Town of Warren, Herkimer County). We are used to seeing such cultural incongruity in urban New York, perhaps, but the backdrop of rural upstate made it all the more intriguing.

Founded by Russian émigrés in 1930, Holy Trinity Monastery is part of the Russian Orthodox Church Outside of Russia, which has maintained a staunchly anti- Soviet stance throughout its history. Yet unlike many other examples of American immi­gration that involve gradual assimilation, the story of the monastery shows that it is a hub of Russian language and Orthodox culture.

Historical Chaos
Waves of Russian, Ukrainian, Polish, and Italian immigrants began to move into Herkimer County in the 1880s. The Russian population in the Village of Herkimer was large enough by 1916 to sustain a Russian Orthodox Church. However, the founding of Holy Trinity Monastery was far more influenced by the first major wave of emigration following the Bolshevik Revolution of 1917. Although the Russian Orthodox Church continued on in the Soviet state, it found itself increasingly undermined or controlled by the Communist Party. Several of the Orthodox believers who emigrated from the former Russian Empire were dedicated to the overthrow of the Soviet regime, and the Russian Orthodox Church soon fell into schism over whether the church hierarchy in the Soviet Union, or in the Karlovtsy Synod in Yugoslavia, represented the true Orthodox Church. As Russians in Western Europe and America tried to decide which branch of the church to follow, additional schisms further fractured the church in the 1920s and 1930s.

Against the backdrop of this chaotic situation, the Hieromonk Panteleimon, a priest monk who had emi­grated to the United States in 1918, and Ivan Kolos, a psalm-reader, resolved to found a Russian Orthodox monastery in the Town of Warren under the Karlovtsy Synod, which would eventually become known as the Russian Orthodox Church Outside of Russia. After working in the Sikorsky helicopter factory in Stratford, Connecticut in the 1920s to earn money, the two men founded Holy Trinity Monastery in 1930 after purchasing property in the Town of Warren in 1928. Soon four other monks joined them, and the small group farmed the land and purchased dairy cows for sustenance. It is interesting to note how Russian tradition had already adapted to its American environment, since the monastery’s early history shows the monks working outside of their religious community and purchasing the land themselves instead of having it donated to them by the social elites, as might have been the case in earlier Russian history. The monks worked within the American system, but with cultural preservation instead of assimi­lation as their goal.

Tragedy
By 1934, the monks paid off their debts and began to build a new structure, which included a chapel on the first floor and cells for the monks on the second floor. This building, designed to be the heart of the monastery, was consecrated in an Orthodox ceremony in 1935 close to Pentecost. But near the end of the service, a fire began in one of the monastic cells overhead that soon turned into an inferno. The monks tried to save as much as they could, but the uninsured building was a total loss. After this tragic destruction, the monks initially lived out­doors or in the barn before purchasing an old two-story farmhouse across the street. Newspaper articles of the time suggest that many people in the community sympathized with the monks’ plight at a time when many Americans faced considerable hardships themselves.

The farmhouse, at least large enough to house the monks and a chapel, became the primary monastic dwelling for fifteen years. As the monks continued to pay off the debts for the now-destroyed building, by the mid-1940s they had expanded their land holdings and purchased eighty cattle. Hieromonk Panteleimon also took a job at a defense plant during World War II to earn money to rebuild. After the war, monks who escaped from Communism in Eastern Europe and China began to arrive, suddenly transforming the scope of the religious commu­nity and raising the monas­tery’s population to fifty by the end of the decade.

In 1946, construction of a new stone cathedral began on the site of the ruined building from 1935, and in 1950 the cathedral was consecrated in a ceremony presided over by Metropolitan Anastassy of the Russian Orthodox Church Outside of Russia. This triumph was a celebrated step in the history of the monastery and was recorded by the Utica Daily Press. The monastery continued to expand in the succeeding decades. Between 1954 and 1957, a building to house administrative offices, a refectory, and monastic cells was added to the complex; a seminary building was constructed between 1966 and 1971; and a new bell tower at the entrance­way, which commemorated the 1,000th anniversary of the conversion and baptism of the Rus’ by Saint Vladimir, a mass conversion signaling the advance of Christianity among the eastern Slavs, was erected in 1988.

The Expansion Continues
New institutions within the monastery also evolved after World War II. Holy Trinity had long wished to be a center for publishing in the Orthodox world, and by the mid-1940s the monks had managed to purchase a printing press that included Church Slavonic type to print liturgical documents and pamphlets. But in 1946, fourteen monks from the monastic press of St. Job of Pochaev fled Czechoslovakia and relocated to Holy Trinity Monastery in 1947—along with the printing press itself. The imprint of the press is said to have been founded by St. Job in 1618 as a means of defending Orthodoxy against the Uniate Church in Polish Ukraine. At the time of the 1917 revolutions, it was run as part of the Pochaev Monastery by Vitalii Maximenko, who relocated the press to Ladomirova, Czechoslovakia in 1924 after it had been plundered by Ukrainian Nationalists and Bolsheviks. This printing press could not only print more material than the previous one at the monastery, but it considerably improved the quality of the monastery’s publications. The monks from St. Job of Pochaev also began to publish periodi­cals such as Orthodox Russia, and as glasnost and perestroika developed in the Soviet Union in the mid-1980s Holy Trinity’s press at Jordanville exported many religious texts to Russia. Since the fall of the Soviet Union, it has continued to be a well-known religious press in Russia.

Holy Trinity Monastery also became home to one of the most important Orthodox seminaries of the late twenti­eth century. Vitalii Maximenko and N.N. Aleksandrov devel­oped the first curriculum for a five-year course of study in 1948 under a charter granted by the New York State Board of Regents. Since then, the seminary has trained more than 200 clergy and monastics of the Orthodox Church abroad and has also educated future artistic talent of the Orthodox community, such as iconographers and musical directors for church choirs. The Utica Daily Press reported on the first graduates begin­ning in 1958 and continues to follow the seminary’s progress.

The monastery also houses an icon studio. Constructed in the 1960s and 1970s, it includes an auditorium, library, archives, and museum, the latter three important reposi­tories for the culture of the Russian diaspora and for several items of religious and cultural significance. For all these cultural and historic reasons, the monastery was placed on the National Register of Historic Places in 2011.

An American-Style Russian Hamlet
Today, although the monas­tery is no longer entirely self-sustaining through the work of the monks alone, it still owns large tracts of land that it leases out to local farmers in the area. In Russia, monasteries had also been substantial landholders, despite confiscations during the eighteenth century. This tradition of the monastery as landholder has now been adapted to an American environment with the reliance on contractual work.

In the wake of the popula­tion shifts after the fall of the Soviet Union, Holy Trinity Monastery has become an important pilgrimage site for Russians living in or visiting America. The monastery has a special guest house to accommodate pilgrims, as well as two sizeable cemeteries, since many Russian-Americans wish to be buried close to the monastery. In this small corner of upstate New York, one can hear Russian and other Slavic languages spoken as though it were a part of Eastern Europe, and church services are primarily conduct­ed in the traditional literary language of the Russian Orthodox Church, Church Slavonic, instead of in English. While this makes the cultural environment radically differ­ent from the surrounding Town of Warren, the Slavic presence in the hamlet of Jordanville is quite palpable—an unusual rural environment in a most unusual slice of the state.

Sources of information for this article included the documentation for the monastery’s listing on the National Register of Historic Places; the book Herkimer County at 200, published by the Herkimer County Historical Society, a copy of which I consulted at the New York State Library; the commemorative souvenir book Pamiatka k 75—letiiu Sviato-Troitsakago Monastyria [A Souvenir of the 75th Year of Holy Trinity Monastery], 1930–2005, published by the monastery and sold in its bookshop; and the Utica Daily Press archives. I also consulted two different pamphlets, each entitled “Holy Trinity Monastery Jordanville.” One was published in 1950 and is held by the New York State Library; the second was published in 1996 and is sold at the monastery bookshop.

Holy Trinity Seminary’s library and archives are rich in material from the time of the Russian diaspora. The archives include docu­ments of ecclesiastical importance and an extensive collection of Russian émigré press periodicals (many of which are not available else­where) published in many different locations around the world. The library holds rare pre-Revolution periodi­cals and volumes in Russian. Although many of the rarer items are in Russian or other Slavic languages, these make up only about half of the collection.