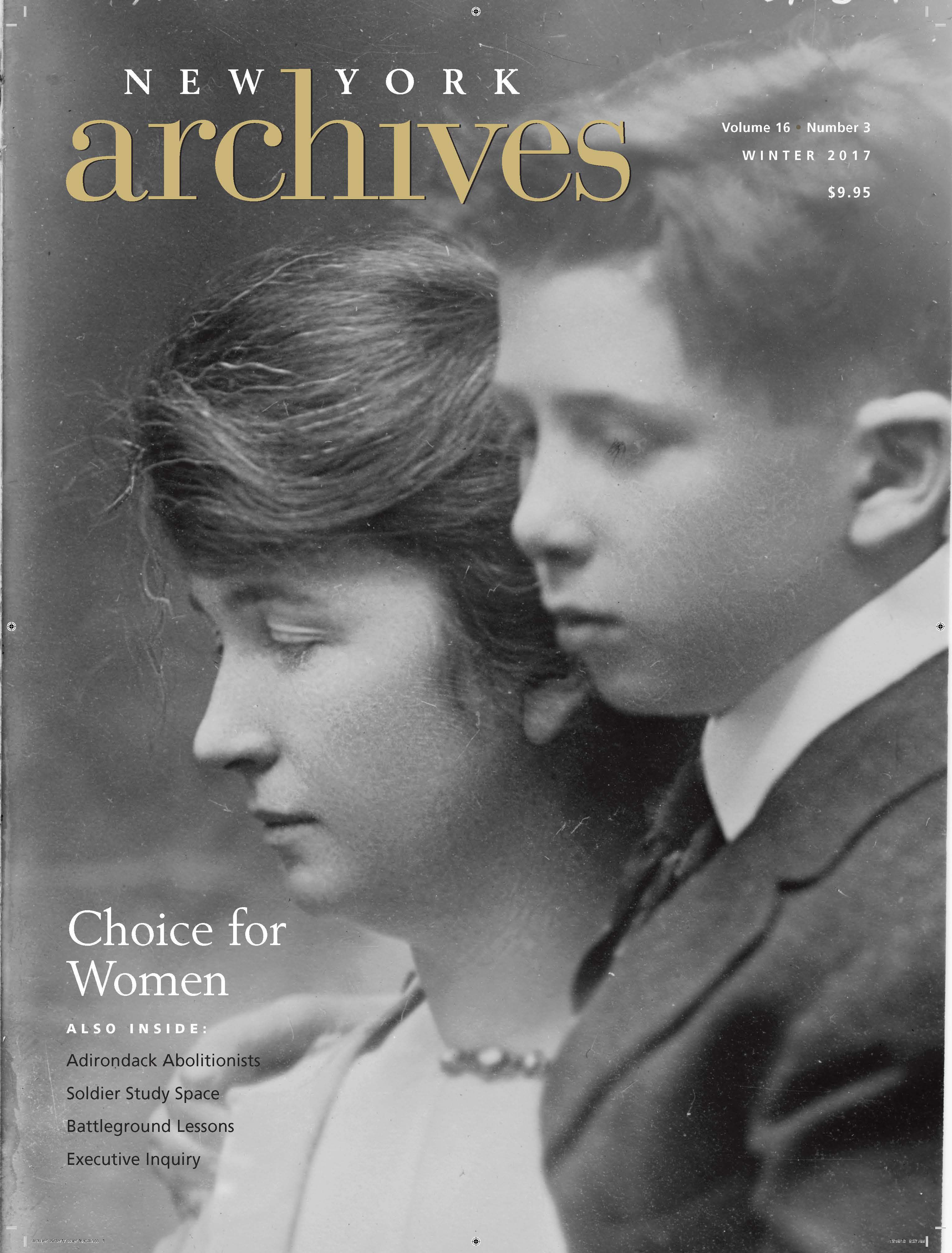 A Relatively Ordinary, Rural Woman
Bonnie Laughlin-Schultz
The women of the John Brown family—often taken for granted—were just as committed to the struggles against slavery.

Ethel Byrne: The Birth Control Movement’s Other Sister
Kerry Shermer
Two sisters from humble beginnings started a revolution in the world of reproductive rights by challenging the Comstock Laws.

Smart Soldiers
Devin R. Lander
A unique program involving the State Historian paved the way for the GI Bill and educated many troops on the battlefield during WWI, many of whom were illiterate.

The First GI Institute
Richard Frost
New York State prepared for returning World War II soldiers by creating spaces for them to learn in at least one familiar setting—an old Army base.

At the John Brown farm outside Lake Placid, a monument stands reminding visitors of “the women of the John Brown family, and others who so gallantly aided their men folk in their struggles against slavery.” Despite the monument, visitors no doubt still focus on the story of the men who lived there—it was the Brown sons, for the most part, who fought alongside their father first in territorial Kansas and then in the slave state of Virginia. But before Brown turned to militant antislavery insurgence, he lived at North Elba in New York’s Adirondack Mountains, and it was there that his eldest daughter Ruth, born in 1829, adopted the antislavery cause as her own.

The Brown women are often taken for granted in the story of John Brown, the fiery abolitionist who, along with twenty-one young men, attempted to incite a slave insurrection in Harpers Ferry, Virginia, in 1859. The raid is considered one of the events that brought on the Civil War, and, ultimately, the death of American slavery.

Brown’s children were schooled in antislavery in the 1830s. The family read The Liberator and heard talk of abolitionism from John Brown; moreover, Brown’s family was told to expect to make many sacrifices on behalf of the cause. Ruth was just nine when she first accepted abolitionist duty. The Brown family attended an integrated church, but one in which African Americans were seated separately. John Brown vowed that his family should model radical egalitarianism. The next Sunday the family walked into church with an African American couple, and they all sat together. “The whole congregation were shocked,” Ruth recalled, “and the minister looked very angry, but I remember Father’s firm determined look.” The Browns were soon expelled from the church.

New York Move
After a series of economic and personal losses in the 1840s, John Brown channeled his energy into antislavery. In 1849, he moved his family over five hundred miles from Ohio to upstate New York to North Elba, where Gerrit Smith had established a land-grant colony for African Americans. It was soon dubbed Timbuctoo by its inhabitants. [For more information, see “Timbuctoo” in the Summer 2014 issue of New York Archives.] Brown saw something in what Ruth described as an Adirondack wilderness; after a decade of economic insecurity, he was looking for a place to redeem his family financially. He had had a variety of endeavors, none of which proved lucrative, including a wool business. He was also there to enact his belief in equality by working alongside African Americans who had been drawn by Smith’s philanthropic attempt to provide land to African Americans, in part to fight back against New York’s new property-based restrictions on black voting. Ruth recollected his enthusiasm for the “grand mountain scenery” and his sense “that he was needed.”

At North Elba, the Browns met daily with those whose lives were marked by slavery and racism. The first morning, Ruth met Cyrus, a runaway that John Brown hired. With his addition, Ruth recalled in a reminiscence written for Franklin Sanborn and later published in his Life and Letters of John Brown, “there were ten of us in the little house.” In their relationship with North Elba’s African American community, Ruth and the Brown family put into practice a lifetime of Brown’s unorthodox belief that all people deserved equal treatment. In the Brown home, all sat together at the same dinner table, and from what we can tell, the Brown family was active in helping at least some fugitive slaves.

The following year, in 1850, national discussion of slavery intensified. Sectional tension mounted as Americans debated whether the new state of California (gained as a result of the United States war with Mexico, which ended in 1848) should enter as a free state, with Southerners protesting that this would diminish their power. To pacify them, Congress issued a strict Fugitive Slave Law, essentially allowing Southerners to come into communities as far north as Boston and Lake Placid to recapture slaves—or to claim free African Americans as slaves. Her father, Ruth recalled to John Brown’s friend and financial backer Franklin Sanborn, “went round among his colored friends there who had been fugitives, urging them to resist the law, no matter by what authority it should be enforced.” Brown’s growing commitment to armed resistance was not limited to himself: Ruth later recalled that her father “bade us resist any attempt that might be made to take any fugitive from our town.” Strikingly, she required little persuasion. She recollected, “[O]ur feelings were so roused that we would all have defended [Cyrus], though the women folks had resorted to hot water.” Here, Ruth claimed a weapon, though she admitted it to be a specifically female one, acknowledging the domestic ideals of the nineteenth century, which assumed white women occupied work in the domestic, private sphere—their natural sphere of influence.

The Cause
Ruth arrived at North Elba as a young woman. She soon met and then married Henry Thompson. Together, they read Uncle Tom’s Cabin and discussed “the cause.” She reported to Wealthy, her sister-in-law, that some of the white neighbors thought abolitionist agitation was only worsening the plight of the slave. She found this to be nonsensical. Moral suasion, she wrote, was far too mild a means to use in the fight against slavery, one “which I think will do about as much good as it would [sic] to try to pacify a raging tiger with the promise of a good meal by and by.”

By the mid-1850s, Kansas territory emerged as the newest antislavery battleground, and Brown, five sons, and Henry Thompson soon went there to take a stand alongside other Free State forces determined to prevent Kansas from entering the Union as a slave state. Brown’s second wife Mary and Ruth—a new mother herself— faced a number of challenges in their absence. Ruth and her stepmother’s day-to-day lives were preoccupied with scraping by, tending to the farm, Old Spot the cow, and their children. John Brown made no attempt to conceal the Brown sons’ militant endeavors or the dangers which they faced in Kansas. He reported that the previous Tuesday had been an election day, and, “hearing that there was a prospect of difficulty we all turned out most thoroughly armed.” Brown closed with these words of consolation: “I humbly trust we may be kept and spared to meet again on earth.” Scraping by, then, was accompanied with dealing with fears of what might happen, and Ruth worried much about her husband, father, and brothers. Such fears were realized when Frederick Brown was killed near Ossawatomie.

Ruth wrote to Henry of the anxiety stemming from reading accounts of the Kansas troubles. “I do very much want to see you, Dear Husband,” she confessed, “and I often feel as though I could not be separated any longer from one that is so dear to me.” Though her letter makes it clear how hard his absence was upon her, she also confided her belief that he—like she—was sacrificing for a noble cause, one which “you felt to be your duty.”

Henry did return, alive if not unscathed with a rifle ball from the Battle of Black Jack lodged in his shoulder; there, he had fought alongside Free State forces in armed conflict with proslavery forces, and he had seen two of his brothers-in-law captured and held prisoner. Soon after, Ruth described her belief that God had been with the Brown men in what she described as their “great and benevolent work.” By this point she had no doubt that such work risked violence and even death. But she fearlessly declared her continued devotion to Brown’s cause.

Making Plans
In the years after his return from Kansas, John Brown roamed far and wide from the Adirondacks, making plans, gathering recruits, and courting New England funders. Mary and Ruth remained at North Elba, tending the family homestead. Eventually, Brown made his way to Harpers Ferry, where he was joined by three sons—but not Ruth’s husband. With three children, she declared her need for Henry to remain at home.

From North Elba, the Browns kept up with the raiders as best as they could, always happy to receive letters but unsure of how plans were coming together. After all her sacrifices, it is hard to imagine Ruth’s emotions as she waited. On the Tuesday after Brown’s attack, a Brown daughter-in-law opened a newspaper to headlines about the attack and the death of her husband. The family’s sorrow was mingled with pride. Ruth stated, “Our grief was heavy, but we did not feel humiliated nor disgraced; and even though my father died a felon’s death, none of us ever felt but that he was a noble martyr.”

As a relatively ordinary, rural woman, Ruth Brown Thompson would likely be obscured from the historical record but for her connection to John Brown and to the momentous events of the 1850s. She was among a small percentage of Americans who adopted antislavery sentiment and a still-smaller group that embraced a belief in militant abolitionism. Ruth and her family left North Elba in 1864, first moving to Put-in-Bay, Ohio, and then onto Wisconsin, where they stayed for a number of years. Finally, in the early 1880s, they made a final migration to Pasadena, California, where they found support and affirmation from a Republican community that included some of John Brown’s old abolitionist compatriots. Ruth died there in 1904, and she is buried alongside Henry Thompson in Mountain View cemetery in Altadena, under a headstone that reads simply, “Ruth Brown Thompson, 1829-1904.”

Archives throughout New York and the country hold records relating to the Brown family. Though historians face a paucity of records regarding ordinary, rural women in the 19th century, correspondence and other materials about the Brown women is contained in broader collections about Brown himself. New York collections used in this piece and in my broader research about the Brown women include the Edwin J. Cotter Collection on John Brown, Feinberg Library,

Additional sources include Franklin Sanborn, ed., The Life and Letters of John Brown, Liberator of Kansas, and Martyr of Virginia (Boston: Roberts Brothers, 1885); Lou V. Chapin, “The Last Days of Old John Brown,” Overland Monthly and Out West Magazine 33 (April 1899); Tony Horwitz, Midnight Rising: John Brown and the Raid That Sparked the Civil War (Henry Holt, 2011); and Bonnie Laughlin-Schultz, The Tie That Bound Us: The Women of John Brown’s Family and the Memory of Militant Abolitionism (Cornell, 2013). A monument to the Brown family women stands in honor of their dedication at the John Brown Farm in North Elba.