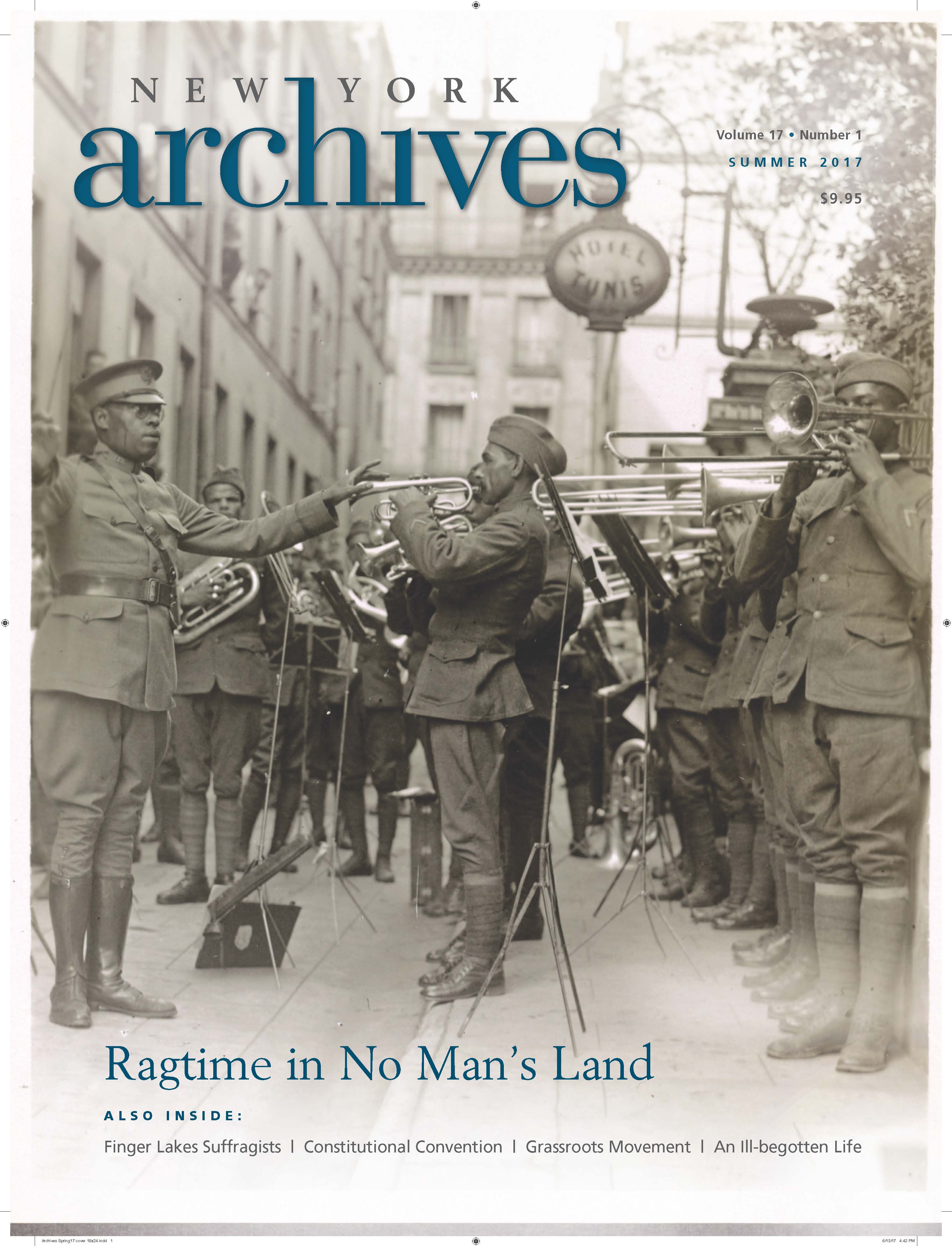 On Patrol in No Man’s Land
Aaron Noble
Lyrics created by African American Army lieutenants portrayed the infamous No Man’s Land between the trenches of the western front in France.

A Mother-Daughter Team
Kerry Lippincott
The Miller women’s passion for equal rights still resonates in Geneva and New York State. They drew speakers to their home in the Finger Lakes and educated scores of women.

A People’s Convention
Peter J. Galie and Christopher Bopst
Global events influenced the 1938 New York State Constitutional Convention, which led to one of the most enlightening and high-quality discussions of civil liberties in the state’s constitutional history.

The Brothers: The Forgotten Struggle for Civil Rights in Albany
Brian Keough
A grassroots movement during the early 1960s reveals the narrative of the forgotten struggle for economic inclusion and equal opportunity to jobs and housing.

A Black Sheep in the Family
John L. Scherer
An 1877 letter from an ancestor about prison life tells a story about a sad life that led to prison reform.

Everyone is Welcome
Gwynneth C. Malin
The LGBT Community Center National History Archive in New York City documents the lives and experiences of the LGBT community.

On Patrol in No Man’s Land

“Are you ready? Steady! Very Good Eddy, Over the top—let’s go…”

Those are the lyrics created by two American Army lieutenants—James Reese Europe and Noble Sissle—describing what it was like when they entered the infamous No Man’s Land between the trenches of the Western Front in France.

While many songs have been written about the Great War, this ragtime tune was unique because Europe and Sissle were members of the thriving jazz community from Harlem and were serving in the state’s only African American unit. America’s Ragtime Era spanned from 1893 through the return of U.S. troops from the First World War in 1919, when the use of the term ragtime was replaced by “jazz.” “On Patrol in No Man’s Land” is one of several composed by Europe during the war. These songs, featuring syncopated—or displaced beat—of the percussion often identified with the ragtime genre, were also composed primarily for an audience as opposed to dance tunes.

Europe was born February 22, 1880, in Mobile, Alabama, before moving to Washington, DC, where his mother taught him to play the violin and piano. Following the death of his father in 1899, the teenaged Europe moved to New York City to pursue a career in music. His arrival in New York was not without challenges, for few clubs or theaters would hire black musicians.  Europe persevered and began to establish himself in the New York music world. In 1910, he formed the African American Clef Club and led its 125 members at a concert at Carnegie Hall in 1912. Shortly after this history-making performance, Europe partnered with famed dancers Vernon and Irene Castle and composed numerous numbers for them.

Noble Sissle was born July 10, 1889, in Indianapolis, Indiana. He grew up in Cleveland, Ohio, where he was a member of his church choir and high school glee club. He attended DePauw University and later Butler University, before moving to New York City to pursue a music career. When he arrived in New York in the spring of 1916, Sissle became a manager in Europe’s growing music business.

On September 18, 1916, James Reese Europe enlisted in the New York National Guard as a member of the 15th Infantry Regiment, the state’s only African American unit. In a conversation with Sissle, Europe described his motivation for joining the regiment: “our race will never amount to anything, politically or economically, in New York or anywhere else unless there are strong organizations of men who stand for something in the community.” Noble Sissle followed on September 26. On December 11, Europe was commissioned as a lieutenant.

Colonel William Hayward, commander of the 15th Infantry Regiment, asked Europe to take the position of bandleader. Europe agreed under the condition that the colonel allow him to recruit “the best band in the country.” Sissle was promptly named drum major for the regimental band.

Following American entry into World War I, the 15th New York began its odyssey from Camp Whitman near Poughkeepsie, to Camp Wadsworth in Spartanburg, South Carolina, and Camp Mills at Mineola, Long Island. Throughout this time, the men of the 15th were subject to innumerable instances of racial prejudice from citizens as well as from within the U.S. Army. After less than two weeks of training, the regiment was sent overseas, arriving at Brest, France, on New Year’s Day 1918. The men were assigned as laborers on the docks at Saint-Nazaire rather than as combat troops. During the war, the majority of African Americans who served in the American Expeditionary Force (A.E.F.) were employed as stevedores or in labor battalions. Relatively few black soldiers were given the opportunity to serve in combat units.

It was at Saint-Nazaire that Lieutenant Europe’s band began to earn its reputation, as, according to Sissle, “[t]he morale of the regiment at this time was getting very low. At daybreak every morning the entire regiment would be awakened to the martial strains of our band.” As the men marched to and from their assigned labors, the band played “a good ragtime tune to try to cheer the boys up.” Word of James Reese Europe and his band as “an organization of the very highest quality, trained and led by a conductor of genius,” spread quickly through the A.E.F. On February 12, the band boarded a train for the American respite center at Aix-les-Bains where they entertained white American soldiers to rave reviews. Following the war, Colonel Hayward commended Europe and the regimental band, stating, “without the band of the 369th U.S. Infantry the regiment could never have performed the long and difficult service it did both in America and in the A.E.F., and without Lieutenant Europe, there would have been no band.”

In the spring of 1918, the German Army launched a major offensive in an attempt to end the war before enough American soldiers could be brought to France to tip the balance in favor of the Allies. After more than three years of fighting, the French Army was desperate for men and happily accepted American General John Pershing’s offer of four regiments of black troops. French soldiers had been fighting alongside colonial forces from Africa since 1914 and showed little issue with fighting alongside the newly federalized 369th Infantry Regiment.

In the trenches alongside the French, Lieutenant Europe, who also served as second in command of the regiment’s machine gun company, emerged as the first African American officer to lead troops in combat during the war. In early May 1918, Europe accompanied a French patrol into No Man’s Land. Upon his return to the American trenches, he recounted his experience to Noble Sissle. It was this harrowing first venture into No Man’s Land that, according to Sissle, provided the inspiration for Europe’s song. He and Sissle collaborated to capture the tale. Like many other soldiers in the A.E.F., Europe and Sissle struggled to convey a true sense of their wartime experiences. Unlike their fellow soldiers, however, they sought to do so by incorporating lyrics and instrumentation in their story. The song lyrics convey the human emotions of fighting in No Man’s Land—machine guns, artillery, and gas— while the music mimicked enemy guns with syncopated percussion and a German artillery barrage using deep bass drums.

Shortly after this foray into No Man’s Land, Europe’s machine gun company was struck by a German gas attack. The lieutenant was evacuated to a hospital at Geiscourt. While recuperating from the effects of the enemy gas, Europe continued to compose. When Sissle was permitted to visit the hospital, Europe presented him with the completed song, which Sissle described as having “gone down in theatrical history as being a masterpiece of jazz description; of a soldier’s experience in No Man’s Land.” The final product is an extraordinary and one-of-a-kind account of combat during World War I.

The 369th Infantry served for 191 days in combat — more than any other unit in the American Army during the war — and suffered more than 1,500 casualties. On November 26, 1918, the regiment was given the honor of leading the Allied Armies to the Rhine River by the French Army. When the U.S. Army prohibited the regiment from taking part in the Allied victory parade in Paris, the 369th became the first unit of the A.E.F. to return to New York City. On February 17, 1919, an estimated one million bystanders lined the parade route as the regiment marched up Fifth Avenue, through the Victory Arch at Madison Square, and uptown to Harlem. At the head of the regiment were Lieutenant James Reese Europe and his band.

After their homecoming, Europe, Sissle, and the regimental band, embarked on a nationwide tour on March 16, 1919. The band performed at Mechanic’s Hall in Boston on May 9 to mark the end of the ten-week tour. During the intermission, drummer Herbert Wright went to Europe’s dressing room where an argument ensued. In the scuffle, Wright drew a pen knife and fatally stabbed James Reese Europe. News of Europe’s death spread across the nation with many mourning the loss of this “master of the art of ragtime.”

Noble Sissle assumed leadership of the Hellfighters Band following the death of his mentor and friend. He partnered with songwriter Eubie Blake, one of Europe’s protégés, and in 1921 the pair released Shuffle Along, the first Broadway hit musical written by African Americans in the early years of the Harlem Renaissance. Sissle remained active with veterans of the 369th Infantry Regiment up to his death in December 1975.

Research for this feature relied heavily upon the collections of the New York State Archives, Museum, and Library. Both the New York State Museum and New York State Library collections include several examples of sheet music composed by James Reese Europe and Noble Sissle, including “On Patrol in No Man’s Land.” Muster roll abstracts for both Europe and Sissle are held by the State Archives (13721) and offer information about both men’s enlistment in the New York National Guard and their subsequent service in World War I. Much of the primary account of the creation of the song “On Patrol in No Man’s Land” was found in an unpublished typescript manuscript written by Noble Sissle titled Memoirs of “Jim” Europe in the collection at the Library of Congress. A copy of this work can also be found at the New York Public Library’s Schomburg Center for Research in Black Culture, which holds the James Reese Europe Collection. The manuscript includes transcripts of correspondence between Sissle and numerous figures critical to telling the history of James Reese Europe, including Colonel William Hayward, commander of the 369th and several officers and men who served with Europe in France.