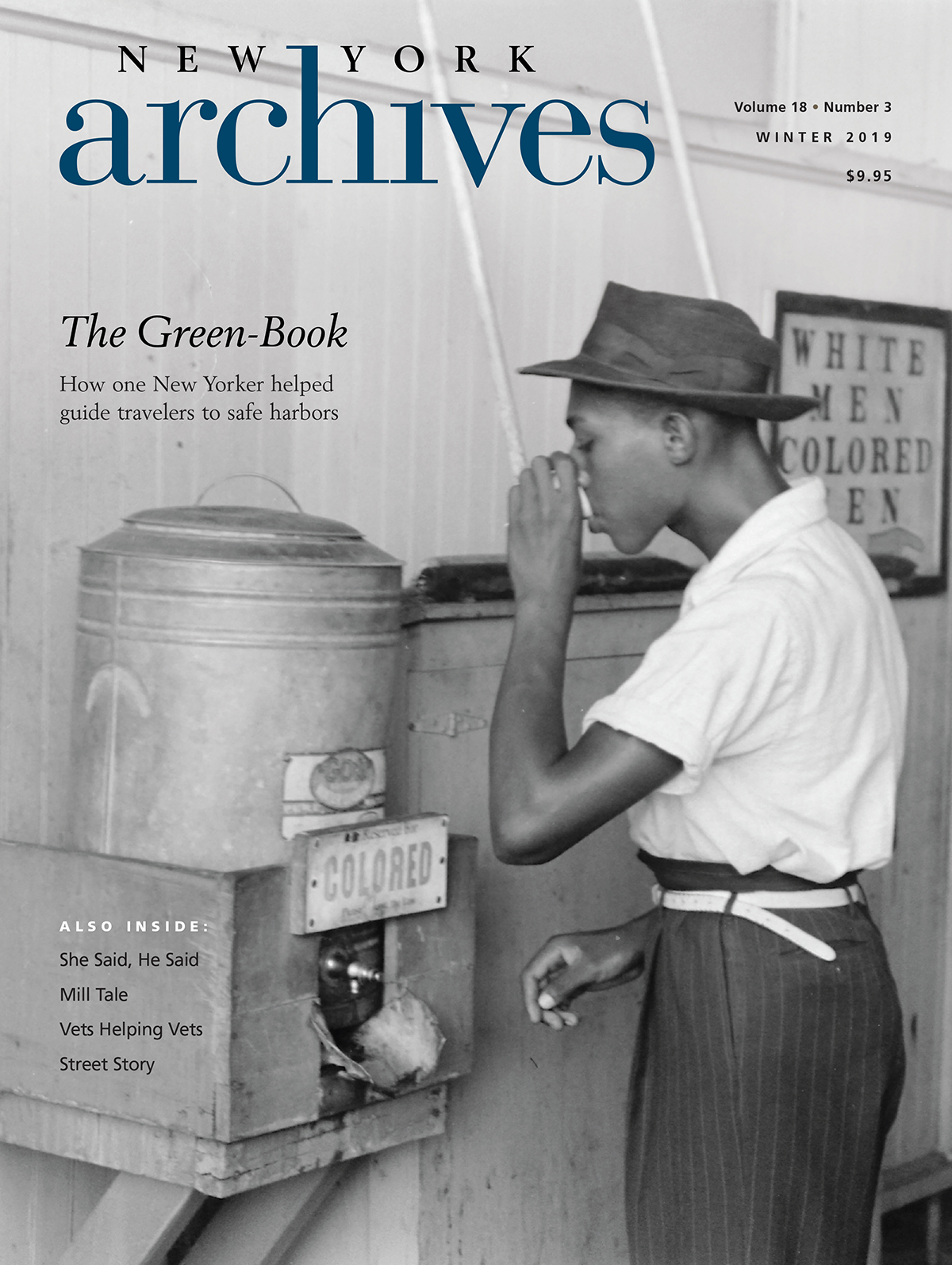 Slurs, Smears, and Suffrage
Linda Czuba Brigance
A fleeting “she said, he said” battle tells a story about the often vitriolic fight over suffrage in the early twentieth century.

The Real Fullerton of Fullerton Avenue
Michael Aaron Green and Joe Santacroce
Researching the history of how a street was
named reveals a clerical error, but also uncovers a fascinating narrative.

Developed specifically for educators, this guide is aligned to the New York State Social Studies Framework. Learning objectives are taken directly from Social Studies practices and content fits within the framework. Paired with a feature article from the Winter 2019 issue, the Educator Guide also includes supporting questions to direct students reading the articles and analysis questions for understanding primary sources. 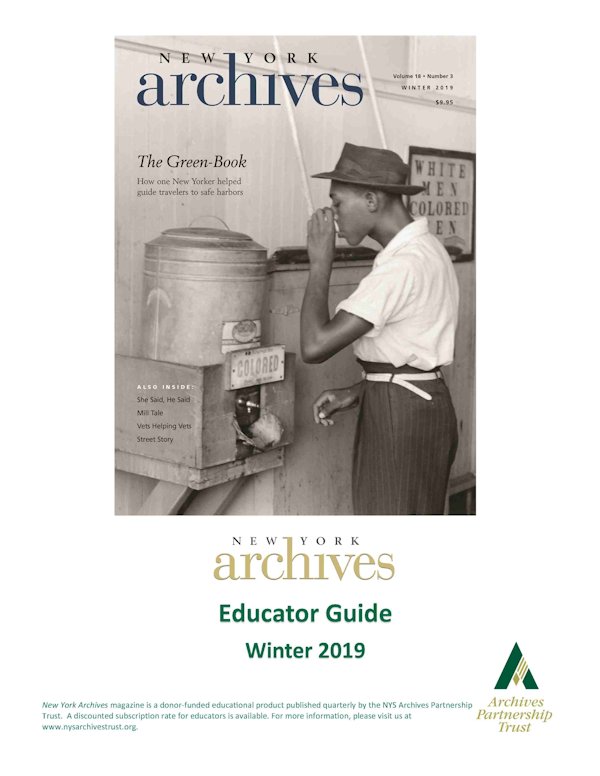 The Negro Motorist Green-Book kept travelers out of harm's way.

In 1936, Donhaven’s in Pleasantville, New York, offered “dining, dancing, and rendezvous” and Gene’s Auto Repairs on West 155th Street in New York City promised, “We can fix em.” Ace Auto Supply, located about thirty-five blocks north of Gene’s, in a bit of one-upmanship, bragged that “We Can Fix ‘em Right.” Then there was Heckscher State Park on Long Island, “where camping could be had for 50 cents a day or two dollars a week.” These locales were featured in the Negro Motorist Green-Book, a 16-page booklet focused on tourist information and services in the New York City area for African Americans.

It was a time when African Americans worried about the availability of food, lodging, and other services when traveling. In the South, Jim Crow laws divided society into “Whites Only” and “Colored” in nearly every aspect of people’s lives. New York City was experiencing the effects of the previous year’s Harlem Race Riot, a protest sparked partially by racial injustice and the disproportionate adverse economic impacts experienced by blacks after the 1929 financial crash. In this context, African Americans worried about the threatening travel dangers associated with institutionalized racism. They worried about the whites-only “sundown towns” across the United States that mandated people of color leave the city limits by dusk or risk arrest or worse.

First Edition
It was in this environment that Victor Hugo Green and George Smith published the first edition of the Negro Motorist Green-Book. Modeled after Jewish travel publications that helped their readers avoid restricted services and places, the first edition of the Green-Book, which cost a quarter, applied only to the metropolitan New York area. At the time of the Green-Book’s first edition, Green was a 44-year-old mail carrier in Bergen County, New Jersey. In 1918, he had married Alma Duke, one of the thousands of people who arrived in New York from the South during the Great Migration. After marrying, Victor and Alma moved to Harlem, which was about to experience the Harlem Renaissance in the 1920s. In 1938, Green became the sole publisher of the guide, which later expanded to include the rest of the US.

With an emerging black middle class and to meet the needs of traveling professionals, job seekers, and others dependent on the automobile for their livelihood, the Green-Book, as it came to be known, helped African Americans achieve greater freedom on the road pursuing leisure activities or economic opportunities. The Green-Book provided a means to locate travel services, but became even more important as a way to avoid refusal of service, harassment, discrimination, and threats. The cover of the 1949 edition advised the black traveler to “Carry your ‘Green-Book’ with you—You may need it” along with the somewhat cryptic partial quote from Mark Twain’s travel book, The Innocents Abroad, “Travel Is Fatal To Prejudice.”

For 30 years, the Green-Book helped guide African Americans to safe harbors as they traveled around the country. The 1940 Edition described itself as “a Guide
not only of the Hotels and Tourist Homes in all of the large cities, but other classifications that will be found useful wherever he may be. Also facts and information that the Negro Motorist can use and depend upon.”

Welcoming to Blacks
The Green-Book included listings of services black travelers might require, including hotels and tourist homes, taverns and restaurants, nightclubs, garages and service stations, beauty parlors and barber shops, and trailer parks and camps. The guide was “arranged under the different cities and towns, so that one won’t have any trouble finding what they want.” As one might expect, the most listings were in the population centers: Chicago, Detroit, New York, and Washington, DC. However, the guide was most valuable for its listings outside these metropolitan areas, where welcoming service providers were rarer. The listed businesses were either black-owned or verified to be non-discriminatory and welcoming to blacks. Many of the listings were still focused on Green’s home state of New York. The 1940 edition had five pages dedicated to New York State travel services for the African American traveler, from Buffalo to Jamestown to New York City and, finally, to Freeport on Long Island. The 1963-1964 edition devoted sixteen pages to services in New York State.

Initially, the business listings were developed through Green’s experiences, on recommendations from others, users of the Green-Book, word-of-mouth, paid endorsements, and entrepreneurial business owners, both black and white. An important source of listings for Green, himself a letter carrier and National Association of Letter Carriers member, were his black carriers’ union colleagues. The carriers’ union’s mission included advancing its own interests, but also maintaining allegiance to public service. The author and playwright Calvin Ramsey described the activity this way: “The mailmen would ask around on their routes to find black and white business owners amenable to being listed in the Green-Book.” With the establishment of President Franklin Roosevelt’s New Deal Travel Bureau and with the help of black Post Office Department co-workers from around the country, who probably knew best which properties were available to meet travelers’ needs, the Green-Book became a national source of travel information. Standard Oil (Esso) was a loyal and continuing sponsor, buying advertising in the guide and selling copies of it at its stations. It wasn’t long before black travelers themselves were assisting Green with suggested additions to the guide. With only a hint of hyperbole, the guide offered advertisers the opportunity to get their names before the public, “Not For A Day Or Week But A Year.” The Green-Book became indispensable not only to travelers but to the entrepreneurial business owners (a significant number of whom were black women) whose listings and advertisements appeared in the guide.

Splendid Opportunity
In addition to the annually verified business listings, many of which Green personally inspected, the Green-Book included travel articles, driving tips, and occasional social commentary or assistance. For example, the 1947 Green-Book included two articles, “Money For Negro Colleges” and “Negro Schools and Colleges in the United States” and a listing of schools the black veteran would “have a splendid opportunity of visiting.” These articles were in response to the passage of the Serviceman's Readjustment Act in 1944, which provided a range of benefits for World War II veterans. Although the GI Bill, as the act was called, extended benefits to all veterans regardless of gender or race, it was easier for some returning soldiers than others to collect benefits. Racial and gender discrimination was high in post -WW II America and African Americans and women struggled to receive higher educations. Even if an African American received tuition money, school choices were limited because many colleges were segregated. In this context, Green’s editorializing was notable.

In another example, recognizing the perils many of its readers faced during the early 1960s civil rights movement, and possibly as a harbinger of the approaching enactment of the Civil Rights Act, the 1963-1964 edition included an article “Your Rights—Briefly Speaking.” The article offered a summary of various state statutes on discrimination that applied to accommodations and recreation. For New York State, the 1963-1964 Green-Book simply stated that discrimination could result in court imposed civil damages and criminal punishments.

The Green-Book was the most popular guide created especially for the African American traveling public. At its peak, the guide sold 15,000-20,000 copies annually and included every state, as well as Bermuda, Canada, the Caribbean, and Mexico in its coverage area. The 1949 edition predicted that “There will be a day sometime in the near future when this guide will not have to be published. That is when we as a race will have equal opportunities and privileges in the United States. It will be a great day for us to suspend this publication for then we can go wherever we please, and without embarrassment. But until that time comes, we shall continue to publish this information for your convenience each year.”

Saving Lives
Green remained an advisor when he retired as publisher in 1952, and Alma, his wife of 34 years, assumed the publishing duties. Green died in 1960, and while he had not lived long enough to see the passage of the Civil Rights Act, he did see the beginning of the demise of Jim Crow laws and the attainment of his aspiration: “to give the Negro traveler information that will keep him from running into difficulties, embarrassments, and to make his trips more enjoyable.”

Green did much more than that; he provided the African American traveler the freedom to experience America more safely. Undoubtedly, he died with the knowledge that the information in the Green-Book had also saved lives.

The Negro Motorist Green-Book ended publication in 1966. It was ten years after highways started to by-pass local communities with opening of the first section of the interstate highway system, which reduced the chance of discrimination. It was two years after the passage of the Civil Rights Act that legally prohibited segregation in public places and banned employment discrimination based on race, color, religion, sex, or national origin. While the Green-Book had promoted a “go along and get along” approach that was in many cases criticized by activists in the Civil Rights Era, the book was an important resource that helped black travelers safely navigate the discrimination they were subject to in a time when there were few such resources available.

The New York Public Library (NYPL) Digital Collections provides access to over 700,000 images digitized from primary sources and printed rarities in the library’s collections, including illuminated manuscripts, historical maps, vintage posters, rare prints and photographs, illustrated books, printed ephemera, and more. The NYPL’s Schomburg Center for Research in Black Culture, Manuscripts, Archives and Rare Books Division has the largest collection of Green-Books in the country with digitized versions of 21 issues (1937-1941, 1947-1957, 1959 -1964) of the Negro Motorist Green-Book. See http://digitalcollections.nypl.org/items/88223f10-8936-0132-0483-58d385a7b928. For an interactive experience, see https://publicdomain.nypl.org/greenbook-map/