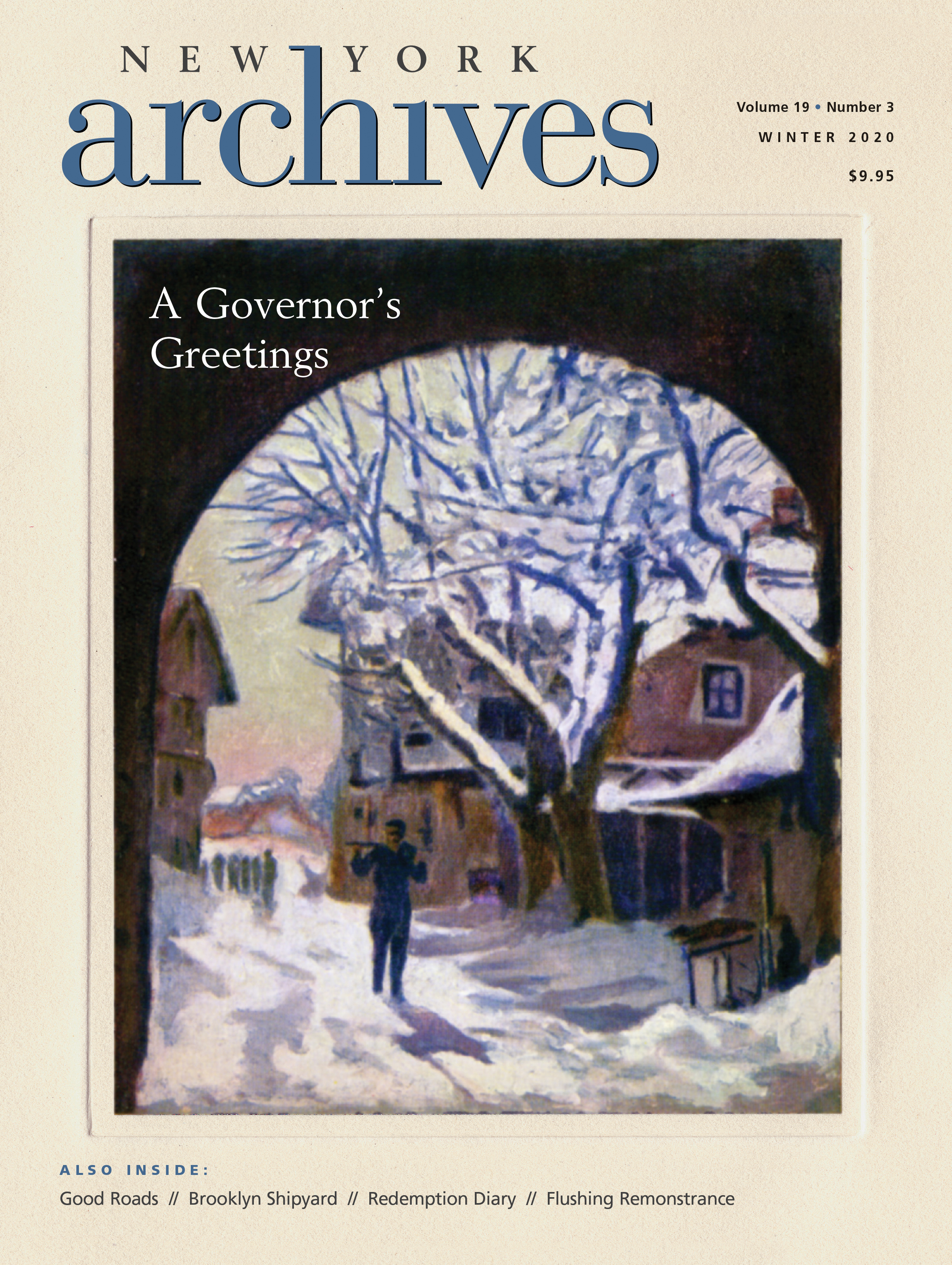 Can-Do Shipyard
Laurence M. Hauptman
More than forty interviews about those who worked at the Brooklyn Navy Yard reveal revolving role of this important place. 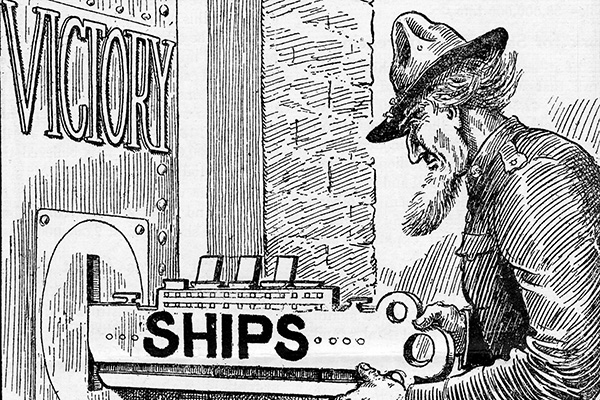 Oral histories tell the story of the Brooklyn Navy Yard.

There’s the story of Tony Ferrara, who couldn’t serve in the military during World War II because of an eye injury. Instead, he became a fire warden at the Brooklyn Navy Yard, a 356-acre naval construction complex employing more than 70,000 wartime workers like Ferrara whose unflagging efforts earned it the nickname the “Can-Do Yard.” Clarence Irving secured work as a mechanic there, at a time when few African Americans held jobs at the shipyard beyond menial positions. Harry Tatowicz wasknown as a virtuoso in laying out castings for machinists. He wanted to enlist, but was encouraged to stay at the shipyard until the end of the war because of his special skill. Carmela Celardo Zuza, one of nine children of Italian immigrants from Naples, became a welder at the shipyard, enduring the taunts of some of her male colleagues in order to help the war effort. Some, like Charles Rocoff, worked for a while at the shipyard and then went off to war in 1943. Richard Johnson, who held a degree in engineering and was a naval officer, used his knowledge to serve as an assistant hull superintendent at the shipyard.

Many Stories
Workers at the Brooklyn Navy Yard were instrumental in the United States’ achievement of victory in the war. We know many of their stories because between 1987 and 1989 and again between 2007 and 2010, the Brooklyn Historical Society carried out more than forty interviews related to the history of the Brooklyn Navy Yard. Although some of the older interviews are grainy and less audible, some stand out, revealing substantial information. Subjects were employees, both civilian and naval personnel, or those who lived near the facility and/or had daily contact with the shipyard and its workers. They included naval personnel who supervised the shipbuilding efforts, civilians who had special skills needed for defense work, men ineligible for military service because of age or physical condition, and women, many of whom had husbands in military service.

Their stories are enlightening not only about their roles at the shipyard, but about their lives before and after their employment there. In a remarkable videotaped interview conducted just prior to his death, Howard Zinn, the noted historian and activist, recounted his days working at the Brooklyn Navy Yard and some of the downsides of the job. Zinn went to work as an apprentice shipfitter at the shipyard in 1940. One of the perks of working there was that his family became eligible to move from their tenement to an apartment in the newly-built Fort Greene Houses. However, Zinn, a first generation American, felt uncomfortable in the hierarchal and inequitable world that he found at the shipyard. He suggested that workers sometimes were perceived by their supervisors as “unwashed, unskilled interlopers” who did not deserve employment. He witnessed and questioned the racial barriers restricting the skilled jobs open to African Americans and the low pay scale for many categories of civilian workers. In Zinn’s interview, along with others’, there are references to efforts at union organizing at the shipyard. In 1943, Zinn, at age 21, quit his job there and enlisted in the United States Air Force as a bombardier on a B-17. The trauma of this war experience led him to become a pacifist the rest of his life.

War Footing
The shipyard was established in 1801 on the northwest Brooklyn shore of the East River across from Lower Manhattan at Wallabout Bay. The first warship was launched from the shipyard in 1820 and the site was continuously active after that. During World War I, the site employed 18,000 workers, and, unlike some of the other naval shipyards, became better known for specializing in building larger warships. In 1940, the American military buildup for World War II transformed the Brooklyn Navy Yard and put it on a war footing.

Prior to 1940, the shipyard was already an impressive site, with thirty miles of track running through it. Besides eight piers, there were Marine barracks, four dry docks, cylindrical floats for salvage work, a power plant, a hospital, foundries, machine shops, warehouses, and a radio station. After 1940, with war clouds on the horizon, the complex expanded substantially. In an interview, machinist Clarence Irving referred to the vast complex as “a city within a city.” By the end of the war, there were a total of 270 buildings in the complex.

Women made up approximately 11 percent of the shipyard workforce nationwidem but only 8 percent at the Brooklyn Navy Yard during World War II. Before the war, 100 women were hired at the shipyard to manufacture flags and pennants flown on Navy ships. During the war, 2,300 women worked in administrative positions as typists, secretaries, and clerks or as nurses in the shipyard hospital; 4,657 were classified as being skilled workers—crane operators, electricians, metal workers pipefitters, truck drivers, and welders—who built ships, weapons, and communication equipment. Women Accepted for Volunteer Emergency Service (WAVES) were assigned there to operate communications equipment and decode messages.

Sexist Taunts
Women at the shipyard had to put up with the taunts of rough and tumble shipyard workers and the lack of changing and bathroom facilities. After a six-week course, some became welders. In one of the more informative interviews, Carmela Celardo Zuza recounted how she became a vertical welder working on the deck of the USS Missouri when the ship was under construction. Despite being a patriotic young woman eager to help the war effort, she was discouraged by her family in this line of what was considered male work. Once she started at the shipyard, male workers shouted at her to “go back to the kitchen.” Sylvia Honigman Everitt, who also worked as welder, pointed out that the women responded in kind: “I had never cursed in my life and that language was very attractive. It remained with me all my life." These tough-minded young women nevertheless persevered, taking great joy when the USS Missouri was launched in 1944. Perhaps the most heralded ship built in Brooklyn during the war, the USS Missouri was the flagship on which General Douglas MacArthur and his military staff accepted the formal Japanese surrender on September 2, 1945. The vessel also served in the Korean and Vietnam Wars before its final decommissioning.

Another woman, Eleanor Bailor Capson, whose father emigrated from Eastern Europe in 1905, had an advanced science degree from Columbia University and worked in the materials testing lab at the shipyard. Her job was to determine how to insulate wires used on ships so that they didn't get moldy. She also tested the tensile strength of different materials that were to be used in ship construction. After her employment at the shipyard, she became a science teacher and later principal at a New York City public school.

Despite their significant contributions to the war effort, women faced gender discrimination in work assignments and were given less pay. According to historian Arnold Sparr in an article in New York History in 2000, few women were in supervisory positions and never over male labor. Few women received advanced training and many who were skilled workers were actually classified as “helpers” and men supervised their assignments. Despite learning and using their skills during the war, once World War II ended in September 1945, these women were closed out of the workforce and were restricted from employment and union membership in the construction trades.

African Americans
With the passage of the Fair Employment Practices Act of 1941, restrictions on the employment of African Americans in defense industries, including at the Brooklyn Navy Yard, were officially lifted, but discrimination did not disappear. Although several thousand African American New Yorkers were finally allowed to be employed, most were hired as unskilled workers. According to historian Craig Wilder in his excellent book, A Covenant With Color: Race and Social Power in Brooklyn (2001), African American employment was mostly centered on menial positions in the shipyards and was at “the lowest rate of any major defense-production region.” Besides allowing a racially-based, two-tiered wage system to operate, investigations by the Fair Employment Practices Commission and the War Manpower Commission found that African American women on the night shift in the naval clothing department at the Brooklyn Navy Yard were replaced with white women with lower seniority.

New Uses
Although there was a postwar lull in naval shipbuilding, the Brooklyn Navy Yard continued to play a major role in the nation’s military preparedness right through the Korean War, when 20,000 workers were employed there. However, by the late 1950s, the shipyard was becoming technologically obsolete and newer ships, much bigger in size, could not maneuver under the nearby Brooklyn and Manhattan Bridges to reach Wallabout Bay. In 1960, a fire during the construction of the USS Constellation resulted in forty-nine deaths and hundreds of injuries. Five years later, the USS Duluth, an amphibious transport and landing craft became the last ship built at this famous shipyard. By the mid-1960s, just when the United States was preparing to expand its war effort in Vietnam, Secretary of Defense Robert McNamara announced the formal closing of the shipyard, laying off approximately 9,000 workers.

Today, while battleships and aircraft carriers aren’t being built, a vibrant reimagining of the shipyard is taking place. During the 2016 presidential campaign, the Democratic Party held one of its debates between Hillary Clinton and Bernie Sanders at the shipyard. Start-ups, television and film studios, manufacturing facilities with 400 businesses employing about 9,000 people, and even a Wegman’s Food Market have moved into the shipyard property, now owned by New York City and managed by the Brooklyn Navy Yard Development Corporation (BNYDC), a non-profit corporation. According to New York City’s own website, NYC City Record Online, the BNYDC generates an estimated $2 billion for the city’s economy.

This article is dedicated to the memory of my aunt Gladys Karol and my mother-in-law Freda Jacobs, both of whom worked at the Brooklyn Navy Yard during World War II. Jacobs worked as a clerical worker at the shipyard while her husband, a physician, was serving in the North African campaign.

For more about Clarence Irving’s later life and his commitment to community service, see “Stepping Up to the Plate” by Robert D. Parmet in the Winter 2018 issue of New York Archives.