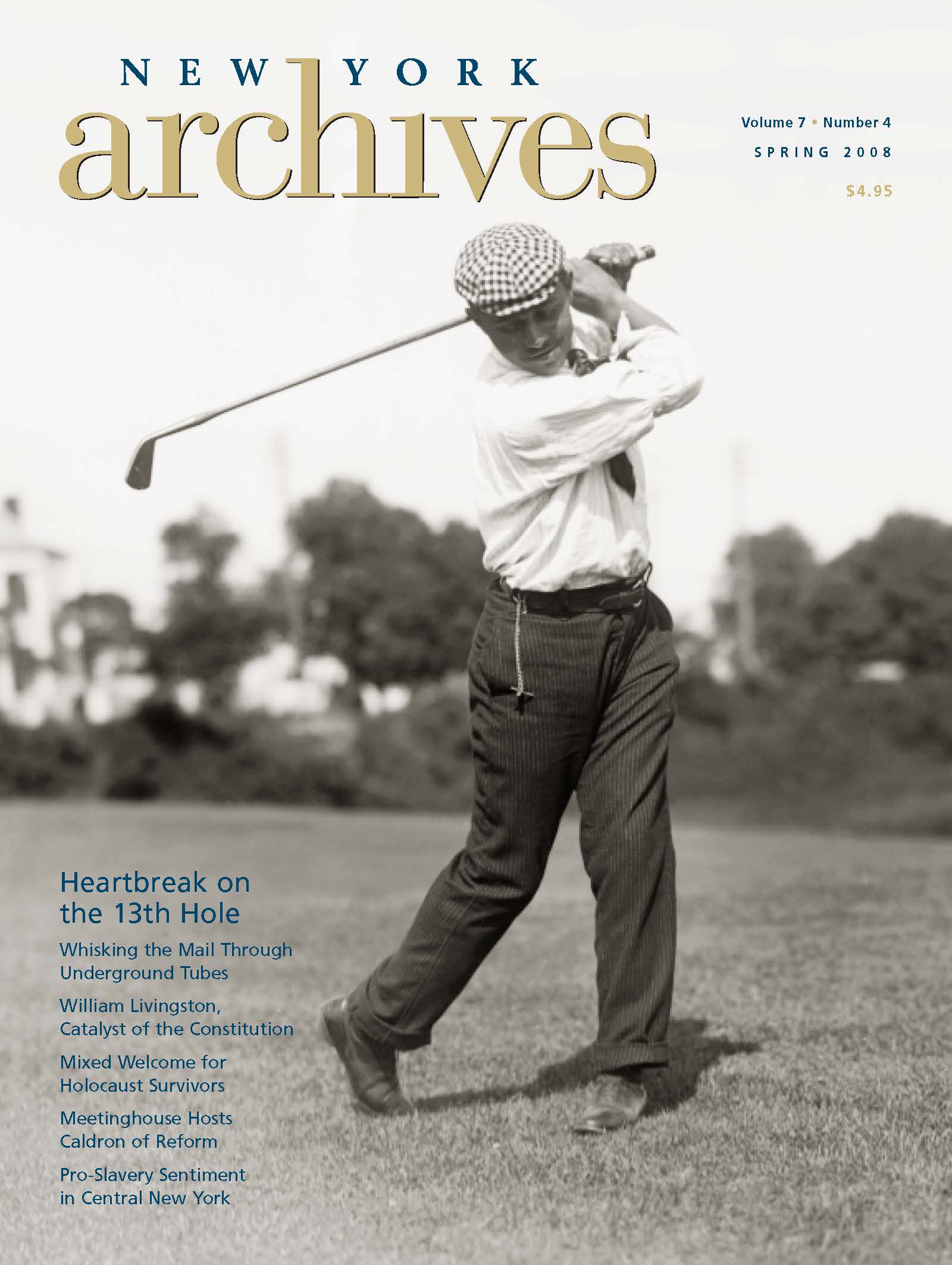 The Golden Tubes
Linda J. Lumsden
John Milholland of Manhattan saw gold in the future of the pneumatic tube.  He was right, and then wrong - until history would prove him right again.

Shippen's Hole
Faren R. Siminoff
Not only American golfer, but one of the America's pioneers of the game, got started at Shinnecock Hills in Southampton, Long Island

Holocaust Survivors in America
Beth B. Cohen
Holocaust survivors were immigrants like no others of the time-and records show that their new lives in America were much harder than previous thought

In the Abolitionists' Backyard
Paul Andrew Reese
Abolition was the fence that divided neighbors, churches, and America. Nowhere was it move evident than in central New York

By Beth B. Cohen

The SS Marine Jumper pulled into New York Harbor on February 17, 1949. Among the 546 displaced persons (DPs) on board were two whose arrival was captured by a New York Times reporter. She wrote, “As he stepped on the gangplank under a gray afternoon sky, a free man on the last bridge to the country of his choosing, and walked on to the bunting-draped pier at Canal Street, he gripped his son’s shoulder and his face streamed with tears of happiness. He kept murmuring in Yiddish, ‘We are here…Now I believe we are here.’”

This father and son were just two of the 140,000 survivors of European Jewry who immigrated to the United States from 1946 to 1954.Their stories of hopeful beginnings and happy new lives appeared frequently in the contemporary media, emphasizing the speed with which they became model citizens and blended easily into the fabric of American life, helped along by their new hosts. One account showcased refugee students who graduated from a New York high school with honors and were college-bound. Another described an immigrant choral group and declared that they “are so well-integrated that they are already able to make valuable cultural contributions to our community.” In the words of one journalist, the refugees’ adjustment was quite simply “miraculous.”

The records, however, tell different and more complex stories—often not the seamless, happy accounts trumpeted by the media. In archival documents, oral histories, and interviews, survivors speak of their excruciatingly difficult period of adjustment. They recall outright rejection by their hosts, and remember the message they received in no uncertain terms: forget about the past, keep quiet about wartime experiences, and just move forward.

Getting Here
The refugees’ path from Europe to America was an interconnected web of different agencies, restrictive DP laws, and ideologies, as well as the push-and-pull of families and friends. In anticipation of the refugees’ arrival, the American Jewish community established a new agency, the United Service for New Americans (USNA), to resettle the newcomers around the nation. USNA’s primary goal was to work with local cooperating Jewish agencies to facilitate this effort. Because the majority of refugees stayed in New York City, USNA created a local branch in 1949, the New York Association for New Americans (NYANA). At the same time, President Truman issued a directive that enabled agencies, as well as individuals, to provide affidavits which promised that DPs would not become wards of the public. As a result, USNA negotiated with communities around the country to persuade them to agree to sponsor refugees. Communities in nearly every state eventually agreed to a quota—but numbers do not reflect attitude. Help was sometimes given willingly, other times reluctantly, if at all, and was often fraught with seemingly legitimate complications.

From 1949 until the early 1950s, for example, the leader of the Tulsa, Oklahoma
Jewish Federation argued that Tulsa Jews were too few, and the employment opportunities too limited, to absorb the number of refugees that USNA asked. While he agreed to accept twenty-four refugees in 1949, he would not go beyond that annual number despite USNA’s repeated requests. Moreover, he asked to send at least one newcomer back to New York because the man “failed utterly” in his first job.

By contrast, Columbia, South Carolina’s Jewish community seemed eager to help. In May 1949, New Neighbors, a USNA newsletter, featured an article, “A Primer in Resettlement for Small Communities,” which outlined how local Jewish organizations mobilized the resources of the 250-family community. It also described the enthusiasm that had spilled over to the Gentile population of 90,000. Along with planning meals, finding apartments and jobs, offering English lessons, providing babysitters, and helping refugees obtain medical, dental, legal, and psychological services, the organizations also enlisted help from local hairdressers, who agreed to provide a free “American up-to-date hair-do” to each newcomer. However, a closer look at archival field reports fills in some important details omitted from New Neighbors: Columbia accepted fewer than ten refugees. In addition, its Jewish leaders encouraged other nearby towns to follow their lead and sponsor newcomers—but to no avail.

Families Disappoint
When the refugees’ American relatives, rather than communities, were the sponsors, the response was also mixed. Many felt an obligation to assist their European families but never intended to make a commitment beyond the affidavit. The NYANA files are rife with such entries as “relatives could not meet the obligation they had  agreed to,” despite their written promises of help. The newcomers needed to feel that they were not alone in the world, and when they felt unwelcome by their American kin, the rift was often irreparable. One man noted how much he and his life resented the fact that their relatives did not invite them to their Passover Seder, "something which they had been longing to attend for years, which they didn’t have after they lost their parents.” Many others echo similar unfulfilled expectations.

However, some American relatives did not disappoint. When other DPs heard she had family in the U.S., one woman remembered how they had remarked on her good fortune. But she kept quiet, thinking, “…How would I know? I never knew them, and they didn’t know me, either.” As it turned out, she counted herself among the lucky ones because of her relatives’ positive response. But she was in contact with others whose experiences differed sharply from her own.

Agencies Step In— And Step Out
When refugees arrived on community affidavits and sponsors reneged on their commitments, the newcomers sought help from Jewish communal agencies. These agencies adopted the philosophy that they were offering a new beginning to the refugees, and focused on finding them jobs so they could join the ranks of productive Americans. By the agencies’ own accounts, they were doing an exceptional job. A September 1952 article in the New York Times quoted a USNA report: “More than three-quarters of the Jewish refugees who arrived in this country on the first displaced persons ship after World War II have become American citizens, and almost all are leading happy and productive lives.”

However, several months after thousands of DPs began to arrive in New York City, NYANA reached a new mandate. Although it had previously promised help for five years, the agency reversed this decision and limited assistance to one year. Here is where the case files illustrate a less-happy version of the refugees’ adjustment in the aftermath of the Holocaust.

Mr. and Mrs. B., for example, arrived in New York City from Europe in 1949. Sponsored by a brother-in-law, they turned to NYANA for help when he could no longer assist them. A caseworker met with the family and optimistically noted that Mr. B. “was able to take hold and follow through with help from the agency.” For the next year, the family met with NYANA representatives, who chronicled Mr. B.’s attempts to find work at any unskilled job. It was not easy. He held a series of menial positions, none of which lasted more than a few weeks. His wife and infant twins were beset by constant illness. Finally Mr. B. found a training job in machine diamond-cutting. But although he completed the apprenticeship and began earning twenty dollars per week (significantly less than minimum wage), in May NYANA terminated the family’s financial aid, as its policy mandated. When Mr. B. expressed concern over his meager income, his caseworker directed him to the Brownsville branch of the Department of Welfare, NYANA stamped the B. file “Case Closed”—and the family was on its own.

This family’s experience was not unique. Rather, it reflects recurring patterns and themes throughout hundreds of files––a striking contrast to the success stories in the postwar media. Yet if this were all the case files revealed, it might be tempting to conclude that these immigrants were no different than other immigrants in their efforts to find their place in a new and alien culture.

Immigrants Like No Others
The files make it monumentally clear that these were immigrants like no others. They were survivors of genocide. Accounts of illnesses, including depression, abound, which interfered with their quest for employment and thus the one-year time limit for agency help. Astonishingly, even though contemporary professional journals included discussions of trauma, those working directly with the refugees made little connection between their clients’ symptoms and their recent traumatic experiences. By focusing on the practical demands of the immediate future, the horrors that the DPs survived were ignored. The refugees tried to speak about their memories, but their efforts fell on deaf ears.

Survivors were bitter about this. They recalled that Americans “thought they were crazy” when they tried to talk about their Holocaust experiences. Others said that
no one wanted to know, not even about their own European relatives’ fates. This was painful for those who had promised murdered loved ones that they would “tell the world what had happened.”

But if the world was indifferent, to whom did they turn? It is clear that they turned to each other. Wherever refugees settled, they formed groups. In New York, they either resurrected failing Landsmanschaftn (hometown social clubs) or created new ones, such as the New Cracow Friendship Society. Elsewhere, they created alternatives. Branches of the New American Club, a postwar Holocaust survivors group, appeared in virtually every refugee community from Los Angeles to Boston, Cleveland to Dallas. One man unequivocally stated that there was no conversation within his group that did not end up on the subject of the war. Remarked one woman, “Even in social situations the topic always came up.” The discussion “always came back to the same thing… ,” recalled another.

From the early postwar years, the Holocaust shadowed those who had survived it. Although there were certainly instances of those who fit the American narrative of “a happy ending,” for many others the economic path was bumpy, the emotional terrain treacherous, and the help they received disappointing as they stumbled forward into an uncertain future. The evidence in the records helps their stories coalesce into a portrait of immigrants more fragile and complicated than their portrayal in the media as resilient, triumphant survivors of Europe’s horror.