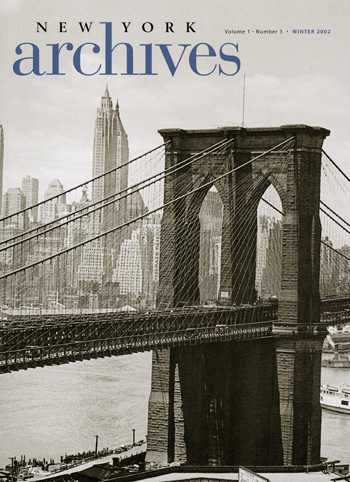 Let the Records Show: The Dutch in Early New York
Martha Dickinson Shattuck
A government hand in everything from baking bread to religious freedom

The South was not the only area of the United States complicit in slavery. Two hundred years before the Civil War, the North, particularly New York, was also a willing participant in the buying, selling, and enslavement of Africans during slavery's most active era (late 1600s through 1700s). African labor contributed not only to the enormous wealth New York State had accumulated at the start of the Revolutionary War, but also to the prosperity that New York merchants and the landed aristocracy enjoyed from business, including slaving. Some of the state's most reputable and politically influential citizens—the Rensselaers, Philipses, Schuylers, Beekmans, Livingstons, and van Cortlands—owned slaves. These families, possessing huge manor lands, benefited from slave labor for generations--their own and their slaves'.

Under both Dutch (ca. 1609-1664) and English (1664-1776) rule, and even into the early decades of American independence (1783-1808), wealthy New York gentry participated in all aspects of the slavery spectrum: from the Atlantic shipping trade of transporting Africans for future enslavement, to buying and selling slaves, to owning slaves on family land in New York. The Frederick Philipse family of Westchester and New York City, for example, ran ships directly to coastal Africa and the island of Madagascar. A story has it that one of those ships attempted to avoid import duties by disembarking a number of Africans at Rye, New York and then marching them overland to the family's upper mill at Tarrytown.

Not every free New Yorker owned slaves, but those that did held, on average, between one and three (see tables, based on 1790 Census figures, showing a comparison of selected New York and South Carolina counties and the percentages of white slaveholding families). Although the numbers of slaves never reached those of the South on large plantations, a few of the manor lords owned a significant number. On a trip through the Hudson River Valley in the early 1790s, an English visitor remarked that "many of the old Dutch farmers...have 20 to 30 slaves [and] to their care and management every thing is left." New York in 1771 had the largest percentage of slaves in the North, about 10-12% of the population. In that year, the total population of the Province of New York was 168,007, of whom 19,873 were slaves. By 1790, the total enslaved population in New York was over 21,000.

But who were those historically silent ones transported across the Atlantic on the infamous "Middle Passage," who were chained in subhuman conditions in the holds of ships and who faced a lifetime of servitude at their destinations? In the chilling words of one of the discoverers of the sunken slaver Henrietta Marie, "One pair of shackles was extremely small, suitable for a child or perhaps a young woman." The captured were men, women, children of all ages, and very often whole families. Those who, during the Middle Passage, died, suffered from disease, or mutinied—in other words, the economically useless—were thrown overboard.

Although the largest number of enslaved Africans imported into New York were from Caribbean islands such as Jamaica, Barbados, St. Christopher, and Antigua, by the middle of the eighteenth century a significant number were arriving directly from Africa. The ship Oswego out of Jamaica, upon arrival in New York in August of 1741, carried a consignment of twelve enslaved Africans for Philip Livingston. Two later slavers, the Rhode Island and the Revenge, both sailed directly from Africa in 1749 and 1751 and carried consignments of thirty-eight and fifty-two African captives respectively for buyers in New York—the latter for William Beekman.

Along the river wharves in New York and up the Hudson to Albany, Africans were bought and sold out of taverns and grog houses or at designated markets. One of the most notorious open-air markets was along the East River at the end of Wall Street. In Albany in 1682, an African male was sold for "the sum of 50 good, whole deliverable beaver skins, but failing of beavers...good, marketable winter wheat, or peas." Gerard G. Beekman of New York City wished, in 1748, to purchase "... a young negro wench and child of 9 months. If she is likely brisk and no bad quality the two will fetch fifty pounds or more." Cadwallader Colden of New York City and Newburgh sought to purchase a thirteen-year-old female. "My wife desires her chiefly to keep the children and to sow...[preferably] one that appears to be good natured."

In both urban and rural cultures, a division of labor existed between male and female, although there were chores that both could do. Women were often cooks, housecleaners, washerwomen, and nannies for their owners' children, as well as integral producers of linens and woolens for home consumption and the colonial markets. Men were waiters, butlers, coachmen, and skilled craftsmen such as carpenters, masons, and wheelwrights. Children were a vital link in this work chain. An English visitor to the homes of Chancellor Robert Livingston and his mother, Margaret Beekman Livingston, in Dutchess County in the early 1790s observed children at work alongside adults:

"Four black boys, eldest about 11 or 12, the youngest about 5 or 6 years old, clean and well dressed but barefooted in a livery green turned up with red, waited about the table [during breakfast]...Three black men in livery waited at dinner and the boys before mentioned, their children. It is not unusual for female blacks to wait..."

One non-labor role that some enslaved children assumed was that of personal companion to slaveowners' children. An example of this factotum status is the life of the enslaved African, Caesar, on the Bethlehem estate of the Rensselaer Nicoll family, eight miles below Albany. At his death in 1852 at the age of 115, Caesar had already outlived three masters in that family. He lived longer than the first to whom he originally belonged; longer than the second with whom he grew to adulthood; and longer than the third, the son of the second, to whom he was a constant companion.

Perhaps the most far-reaching legacy of slavery for the African was the tenuousness of slave families, which at any time, given the nature of the institution, could be broken up or dissolved. Cadwallader Colden did exactly that in 1717. In a letter to a friend on the island of Barbados to whom he sent slaves, Colden wrote:

"I send by this vessel, the Mary Sloope, Capt. Edward Harely Commander, a Negro woman and child...she is a good house negro...Were it not for her allusive tongue, her sullenness...I would not have parted with her...I have several of her children I value and I know if she would stay in this country she would spoil them."

Since slavery was a violent act, and as long as one race held another in bondage against its consent, the institution remained highly volatile. Thus, interpersonal relations between masters and slaves were unpredictable. One area where the differences remained constant and obvious between masters and their slaves was in the legal relationship of slave parents and their progeny. On the Livingston Manor in upper Dutchess County, a tenant farmer, John Dykeman, was murdered in 1715 by his slave, Ben. Coming in the aftermath of the Negro Rebellion of 1712, the act was first thought to be part of another such uprising. But after a preliminary hearing conducted by Robert Livingston, Sr. and some county magistrates, it was determined that the murder was the sole act of a heartbroken, vengeful father: Dykeman had sold Ben's daughter off the manor to one of Livingston's kin in New York City.

The actions of Ben and of others like him were part of a continuum of African resistance to slavery. Such resistance was fueled in the eighteenth century by the enactment of New York's slave code, the Duke's Laws, first published in 1664 and amended periodically beginning in 1674. These laws were a British attempt to undo, or at least undermine, an air of liberalism that the British felt existed in the colonies and that carried with it an enslaved status of "half-free," at least under Dutch rule. Such laws moved to tighten the parameters of slavery, making an African/black-skinned individual synonymous with a slave. A repercussion seems to have been the Negro Rebellion of 1712, followed by the Negro Plot of 1741 and the Kingston Conspiracy of 1775, all trying to enable African freedom and end the nightmare of slavery.

According to Herbert Aptheker, the author of American Negro Slave Revolts, "Discontent and rebelliousness were not only exceedingly common, but, indeed, characteristic of American Negro slaves." In the English colony of New York, this was the driving force behind many Africans who participated in the American Revolution. Their bondage would end, they thought, with victory over the British. But it would not be until July 4, 1827, when New York's emancipation legislation took effect, that the non-participants, and those who were re-enslaved, would gain their freedom.

For New Yorkers to truly confront the legacy of slavery, we must take "the psychological and spiritual journey...back into the past in order to move forward," as historian Tom Feelings writes, by reexamining slavery as an integral part of New York's history. If we can do this, says writer Rosemarie Robotham, "...we may at last move beyond terrors and the angry racial conceptions that divide us, toward the deeper connections that can render us whole...".

Tamika McMillan and Maribel Cordero, interns with the New York State Freedom Trail Project and graduate students at the University at Albany, assisted Professor Williams-Myers with the research for this article.