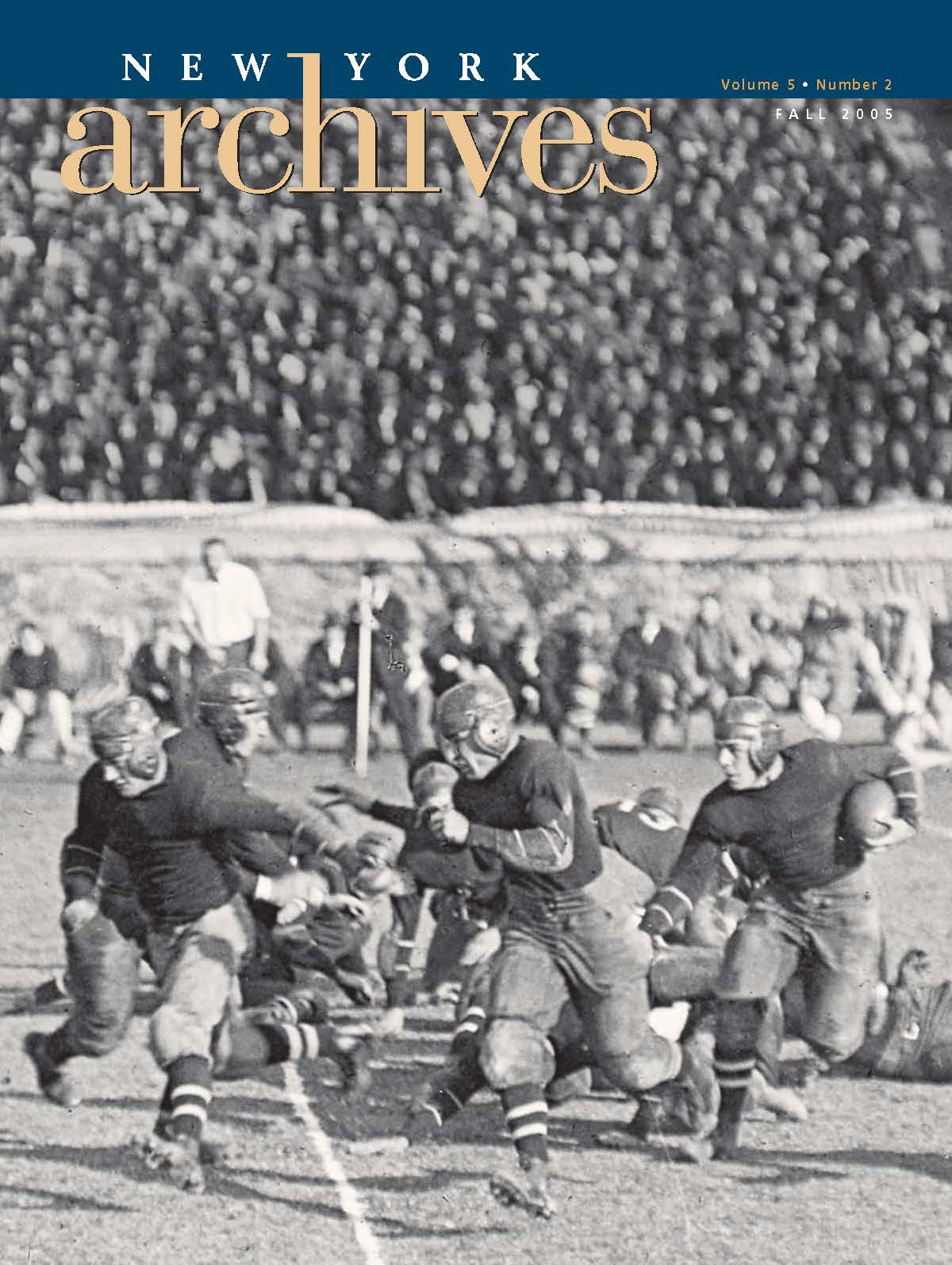 In the Matter of Goody Garlick
George DeWan
In the seventeenth century, the new community of East Hampton turned against one of its own.  The charge was witchcraft.

The Plattsburg Idea
Penelope D. Clute
Out of a career officer's determination came a practical idea for military training for civilians—which proved fortuitous on the eve of World War I

The World's Greatest Miser
Charles Slack
Hetty Green was richer (and stingier) than just about everybody-as well as fearless, a Wall Street genius, and a notable for her accomplishments

The Untidy Origins of Women's Rights
Lori D. Ginzberg
Two years before the landmark Seneca Falls Convention of 1848, six upstate women petitioned the State of New York for their rights

In the Matter of Goody Garlick

In the seventeenth century, the new community of Easthampton turned against one of its own. The charge was witchcraft.

In the early spring of 1658, on the far eastern end of Long Island, a married woman of about fifty named Elizabeth Garlick was accused of being a witch. Thus did the wave of social and religious upheaval that had been festering in New England—and would later reach its apogee with multiple hangings in Salem, Massachusetts—spill over into the isolated village of Easthampton (now East Hampton).

It was a time of discontent for Easthampton’s thirty-four families, strung out along opposite sides of Main Street near the burial ground and the Presbyterian Church. The village was only ten years old, and its residents were still struggling among themselves to create a sense of community. Whispering, innuendo, and backbiting were common, and charges of slander were adjudicated regularly. Given the temper of the times, what happened to the wife of Joshua Garlick was predictable.

A Sudden Death
The trouble began on a Friday—the date is not certain—in early February,
1657/8 (see sidebar). Across the street from the burial ground, a sixteen-year-old mother, Elizabeth Gardiner Howell, lay feverish and delirious in her bed, having just given up her infant daughter to an attendant after nursing. Elizabeth, also known as Betty, crooned a psalm after her child, then suddenly stiffened and shrieked, “A witch! A witch! Now you are come to torture me because I spoke two or three words against you! In the morning you will come fawning.”

Elizabeth’s father, Lion Gardiner, the community’s founder and the most important man in town, was duly summoned from his residence across the street. “What did you see?” Gardiner asked his daughter.

“A black thing at the bed’s feet,” shrieked Elizabeth, stretching forth her hands as if to strike at what she saw.

The next day, Elizabeth’s mother, Mary Gardiner, who had herself been sick in bed, was well enough to cross the street. “I went there and presently went to her bed and asked Betty how she did,” Mary Gardiner said later. “She put out her hand. ‘Oh, mother.’ And she cried and I cried and she said, ‘Mother, I am bewitched.’ I asked her who she saw, and she said, ‘Goody Garlick in the further corner and a black thing in the hither corner, both at the feet of the bed.’”

By Sunday evening, just one day later, Elizabeth Gardiner Howell was dead. Her death set in motion a series of events that consumed Easthampton for the remainder of that spring: charges of witchcraft leveled at Goodwife Elizabeth Garlick, a three-week hearing before three local judges, and a witchcraft trial in Hartford, Connecticut.

Neighbor Against Neighbor
Elizabeth Garlick and her husband, Joshua, lived just down the street from Elizabeth Gardiner Howell and her husband, merchant Arthur Howell. Joshua Garlick was a farmer who had once worked for Lion Gardiner on his nearby island, originally called the Isle of Wight but later renamed Gardiner’s Island. “Goody” was a shortened form of “Goodwife,” and was used for many of the women on Main Street: Goodwife and Goodman were not names, but terms of address for a married person who was not of high rank—similar to Mr. or Mrs.—but also not of the lower class.

On February 19, the hearing began before village justices John Mulford, John Hand, and Thomas Baker. In the space of three weeks, thirteen witnesses testified. The justices got an earful, and much of what they heard was bad news for Goody Garlick. Neighbor after neighbor had their say: tales of black cats showing up at odd times, of children getting sick and dying, and of strange and unexplained things happening out on Gardiner’s Island. It was implied that Goody Garlick had a hand in all of them: a child that was “taken away in a strange manner,” a man who turned up dead, a fat and lusty sow and her piglets that died soon after birth, an ox with a broken leg.

Goodwife Simons said that she was with Elizabeth and her husband Arthur on the second day of Elizabeth’s illness when the sick woman asked them to “‘Send for Goody Garlick! Send for Goody Garlick!…I could tear her in pieces! She is a double tongued woman! Did you not see her last night stand by the bed side ready to pull me in pieces? And she pricked me with pins.’”

Thomas Talmadge, who was also secretary for the hearing, told the judges of an event one day when he was at the house of Goody Davis: “She [was] there speaking to me about some accidents that had fallen out among them at the Island as concerning the death of her child in what manner it was taken away and of an ox that had his leg broke and having reference in her speech concerning Goody Garlick as if she were a witch.”

Jeremiah Vaile, who lived next door to the Garlicks and who had once worked for Lion Gardiner, claimed that Gardiner had challenged Davis’ story that Goody Garlick had caused the death of Davis’ child. Vaile testified that Gardiner said that “Goody Davis had taken an Indian child to nurse and for lucre of a little wampum had merely starved her own child.”

The name Goody Davis keeps coming up in the testimony—and if ever there was anyone who was a community leader in whispering, innuendo, and backbiting, it was she. Oddly enough, she did not testify, but when reading the transcripts it becomes clear that much of the accusatory, hearsay testimony against Garlick heard by the justices originated in the mind of Davis. Why she focused her bile on Garlick is uncertain.

Brief Trial, Terse Verdict
In the end, however, Goody Garlick stood accused, and the three Easthampton justices sent the case to Hartford, Connecticut to the Court of Magistrates for a jury trial on the charge of witchcraft. Although all of Long Island had originally been claimed by the Dutch as part of New Netherland, by 1650 its eastern half had been ceded to the British. The East End communities thus had administrative ties to New England, which is why Elizabeth Garlick was sent to Hartford for trial.

The record of the trial—on May 5, 1658, about three months after Elizabeth Gardiner Howell’s death—is brief. The court was headed by Connecticut Governor John Winthrop, and the indictment was severe: “Elizabeth Garlick…that not having the fear of God before thine eyes thou hast entertained familiarity with Satan the great enemy of God and mankind, and by his help since the year 1650 have done works above the course of nature to the loss of lives of several persons (with several other sorceries) and in particular the wife of Arthur Howell of East Hampton, for which both according to the laws of God and the established law of this commonwealth thou deserveth to die.”

There is apparently no record of testimony or arguments made by either side. The judgment was terse: “The jury doth not find Elizabeth the wife of Joshua Garlick guilty according to the indictment.” This verdict was hardly pro forma. At least four hangings for witchcraft had taken place in Connecticut before the Goody Garlick case.

An Execution Averted
It is Salem, Massachusetts in 1692 that we remember for witchcraft trials in America. In her recent book In the Devil’s Snare, Cornell University historian Mary Beth Norton enumerates the toll: “(L)egal action against at least 144 people (38 of them male), most of whom were jailed for long periods; 54 confessions of witchcraft; the hangings of 14 women and 5 men; the pressing to death of another man by heavy stones; and the deaths in custody of 3 women and a man, along with several infants.”

The jury in Hartford got it about right, according to Northwestern University historian T.H. Breen in his book Imagining the Past: East Hampton Histories: “The investigation into witchcraft had uncovered no witch. Rather, it had exposed once again a pattern of slander and defamation. Discontented people in East Hampton who had come to this isolated extension of New England culture looking for a fresh start and some possible bettering of their lives had, in their ambition, turned on each other.”

Elizabeth Garlick went home to Easthampton and lived for almost another half-century. Not so fortunate was Goody Davis, who appears to have died soon after the Hartford trial.