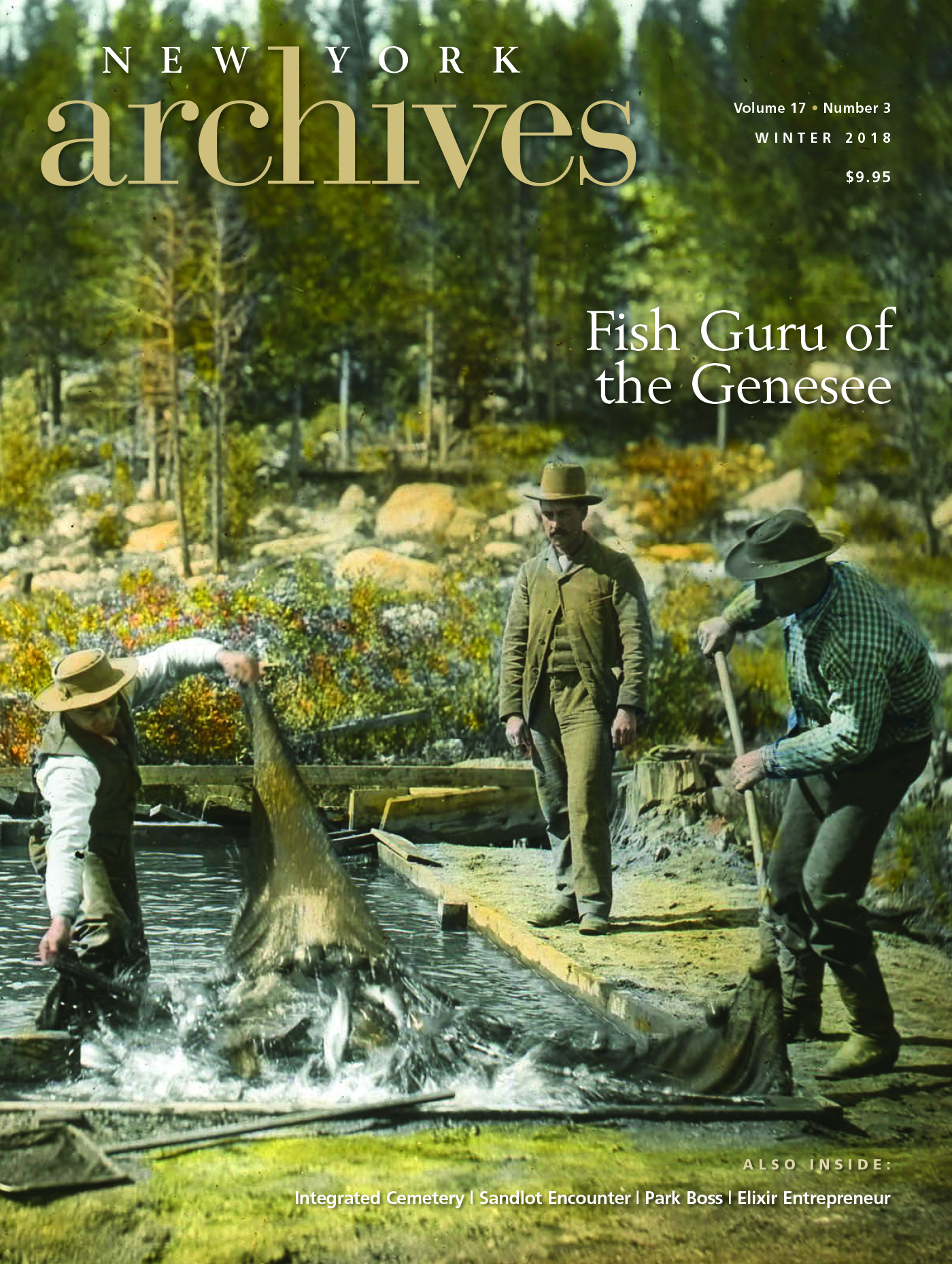 Stepping Up to the Plate
Robert D. Parmet
The Bisons and Clarence Irving changed the lives of African American youth in New York
City through baseball.

Promoting a Pancea
R.E. Fulton
A nineteenth century cure-all was part of the first wave of medical advertising and a windfall for Benjamin Brandreth who introduced his elixir to America.

Brookside: An Integrated Cemetery in the Adirondacks

Two black farmers, brothers Charles Henry and Alexander Hazzard, were among seventeen men who gathered on an October evening in 1879 to establish Brookside Cemetery, a final resting place for the residents of St. Armand, a remote Adirondack community in Essex County.

Avery Hazzard, the father of the two brothers present at the cemetery’s organizational meeting, was likely the first African American to be buried in Brookside. A onetime resident of Washington County and the son of a Revolutionary War soldier, Hazzard farmed and expanded a forty-acre land grant received circa 1850 from Gerrit Smith. The death date on Hazzard’s tombstone is given as 1862; his body may have been relocated after the cemetery’s opening from earlier burial on a Hazzard farm. Alexander and Charles Henry Hazzard and many of their descendants are buried there, too.

Fervent Abolitionist
Brookside came to reflect an unusual pattern of racial mix in the predominantly white Adirondack region of northeastern New York. It did so, first, as the burial ground for members and descendants of black families who lived on nearby land parcels gifted to them by Smith, a wealthy white philanthropist, social reformer, and politician. Smith believed that land ownership constituted an important step toward qualifying black men to vote, a right diminished for them with ratification in 1821 of the state’s second constitution. As a fervent abolitionist, in 1846 he committed to donating some 120,000 acres of undeveloped New York State land for farming to African Americans, much of it in Essex and adjoining Franklin counties.

Rural Cemetery
The town of St. Armand, founded in 1844, was built on lumbering, but as trees disappeared, agriculture became residents’ primary occupation. The population stood at around 450 when Brookside Cemetery opened in 1880 on a one-and-a-half-acre rectangular land parcel in the hamlet of Bloomingdale. The cemetery was and is rural in the literal sense, not as an expression of the nineteenth century fondness for landscaping suburban cemeteries with ponds and verdant greenery to simulate manicured wilderness. It has no entry gate, nor is it enclosed in any way. It is essentially a mowed field dotted with irregularly spaced red pine trees, unpaved roads for wheeled vehicles running its length through the center and along its outer edges, and pedestrian pathways that cross the central road to create a grid pattern. Lots were first priced at three and five dollars. The cemetery was augmented in 1894 and 1932 with the addition of two small plots to the rear of the original cemetery. Still active, it is maintained by the town.

Charles Henry Hazzard, who served with a black regiment in the Civil War, returned home with a bride from Port Royal Island, South Carolina, and purchased a Bloomingdale farm of his own in 1870. His wife, Julia, a widow, brought her two daughters, Clara and Genevia, north with her. While Charles Henry and Julia had no surviving offspring of their own, Julia’s daughters both married and had children. Clara’s life took her to Vermont, where she married a Burlington barber. Genevia wed locally and stayed on in Bloomingdale until her 1887 death at the age of thirty-one. An obelisk in Brookside Cemetery honoring Charles Henry is surrounded by the graves of his wife, stepdaughter, stepdaughter’s three children, and several grandchildren. Some members of the family adopted a white identity in the 1930s after Genevia’s son married a white woman. They chose, however, to retain their identification with the pioneering Hazzards, leading to a harmonious mix of black and white in the family plot.

Four Brookside gravestones represent the Morehouse family, descendants of another early black settler, Stephen Morehouse, who benefited from a Smith land grant in the adjoining town of Franklin, Franklin County. A number of Morehouse family members are buried less than five miles from Brookside in Franklin’s Union Cemetery, among them a Civil War soldier who served with the illustrious black Fifty-fourth Massachusetts Volunteer Infantry. But Stephen Morehouse’s grandson, John, threw in his posthumous lot with the Hazzard family after marrying a Hazzard descendant. The couple’s son, Marshall, and his wife are also buried in Brookside.

St. Armand’s proximity to the village of Saranac Lake (of which a small section is in the town of St. Armand) also accounted for black residency in the area. This community achieved fame thanks to its reinvigorating mountain air, considered an important aspect of the cure for tuberculosis, and expanded rapidly after the founding of the Adirondack Sanitarium in 1884 (renamed the Trudeau Sanatorium in 1915). Saranac Lake’s growth as a “health resort” and tuberculosis treatment center required a constant infusion of new workers to service the village’s construction and domestic help needs, some of whom were descendants of nearby black farming families. Hazzard and Morehouse men who left their families’ farms to work in town served primarily as “common” or “day” laborers and as teamsters (truck drivers and car mechanics in the following generation). Their wives, who, like other black women, seldom retired from the work force upon marriage for financial reasons, worked as by-the-day or by-the-hour domestic servants, laundresses in their own homes, and ironers in commercial laundries. Other blacks arrived as tuberculosis sufferers. The village was, for some forty years, the center of the largest black community in the Adirondack interior—with fifty-six African Americans among its 4,963 inhabitants in 1910.

Saranac Lake’s unique history as a tuberculosis cure center is represented in a Brookside family plot that serves as the resting place for two black women who ran boardinghouses in the village catering to members of their race. Sisters-in-law Viola Ramsey and Mattie Ramsey Reid arrived in the community after Viola’s 1922 marriage to John Ramsey, the son of a former slave and a Saranac Lake store janitor from 1908. They began offering accommodations in 1923 and 1927 respectively to black visitors and, in particular, to tuberculosis patients who came to town in search of treatment for the disease but were not welcome at the Trudeau Sanatorium or at other privately run “cure cottages.” The women’s entrepreneurial accomplishments placed them in the center of a Saranac Lake phenomenon unique among blacks in the Adirondacks: a self-identifying middle class, one that reported its ambitious collective doings—dances, bridge teas, excursions—in the social pages of African American newspapers in New York City and beyond. When the tuberculosis boom faded in the late 1930s, Viola Ramsey converted her facility into a tourist home and stopping place for the black domestic servants of white guests who stayed at white-only local hotels. Mattie Reid left the boardinghouse business altogether and spent the rest of her working life as a live-out housekeeper.

The Ramsey women were buried beside their husbands in a Brookside family plot they shared with two Ramsey brothers who had no lifetime connection to Saranac Lake but were reunited with their siblings after death. Two of the four men interred there were veterans of segregated military units in the First World War. A later phase of Saranac Lake’s evolution is embodied in the graves of jazz musician Hudson Farrior and his wife, singer Effie Johnson, who settled in Saranac Lake around 1950 and entertained at local dining venues for more than twenty years.

The pattern of burials at Brookside Cemetery was democratic, in that plots for black individuals and families were interspersed with those of whites without prejudice throughout the cemetery. What little research has been done into the post-slavery burial of blacks in the northern United States suggests that such an arrangement was not always the case. Some urban cemeteries segregated by race, relegating blacks to less physically attractive or more out-of-the-way areas. New York City’s Trinity Church Cemetery in Washington Heights had a clearly defined “Colored Ground” from 1853 to 1871, while Albany’s large Rural Cemetery was egalitarian in lot assignment. Although two parcels were set aside for blacks at Albany’s 1844 founding—one for reburials of denizens of a graveyard attached to an early African American church and another the mid-nineteenth century gift of a black woman donor—blacks not settled in either area were buried, from the cemetery’s earliest days, in lots selected by themselves or their families. Other cemeteries in and around Saranac Lake show a similar pattern in plot assignment.

The grave markers of Brookside Cemetery’s black residents reflect the assumption of assimilation into regional culture. None of them mentioned race. Headstones were identical in their period-sensitive architectural styles, decoration, and epitaphs to those of their white neighbors. Among the longest and most flowery epitaphs in the graveyard are those inscribed on the Victorian-era grave markers celebrating pioneers Avery Hazzard and his wife, Margret. Taken from devotional books or purchased, perhaps, through catalogues that sold headstones, these epitaphs memorialize cemetery residents who, unlike their locally-raised descendants, were unable to read or write.

Brookside’s first half-century coincided with a period of hope for the easy integration of blacks into American society after the Civil War. While they were identified by race in national and state censuses, in war records, and often, in St. Armand registers of births, marriages, and deaths, as individuals they affirmed their racial equality in Brookside. Later blacks’ ability to do likewise in many northern cemeteries became increasingly problematic as relations between whites and blacks deteriorated in the late nineteenth and early twentieth centuries. In Staten Island, for example, the seventeen-acre Frederick Douglass Cemetery (now Frederick Douglass Memorial Park) was founded in 1935 by a prominent New York black funeral director in response to what he saw as disturbing signs of increased racial prejudice in cemeteries.

Brookside has not seen many black burials in the last thirty years. The number of African American residents in the region has diminished as black descendants of longtime residents, like their white counterparts, have moved elsewhere in search of better jobs and a broader life. But the cemetery is a reminder of the integrated rural history of the region. Like all burial grounds, it is a rich archive documenting a shared past.

In tracing the history of St. Armand’s Brookside Cemetery and its significant black population, I began where I often do in undertaking Adirondack research projects: with a town historian. It was town historians who provided at least the bare bones of many of the stories documented in my recently published Blacks in the Adirondacks: A History (Syracuse University Press, 2017). Davina Winemiller, the St. Armand town historian and deputy town clerk, has taken a particular interest in Brookside Cemetery, and has platted the graveyard in detail. She also works with the birth, marriage, and death registers that provide details on local residents dating back to 1883, when town records began anew after earlier records were destroyed by fire. Another rich source of archival material has been the Adirondack Research Room at the Saranac Lake Free Library. Its longtime archivist, Michele Tucker, has made a special project of tracing the history of the region’s black pioneers. My warmest thanks to both women for their help in the preparation of this article.