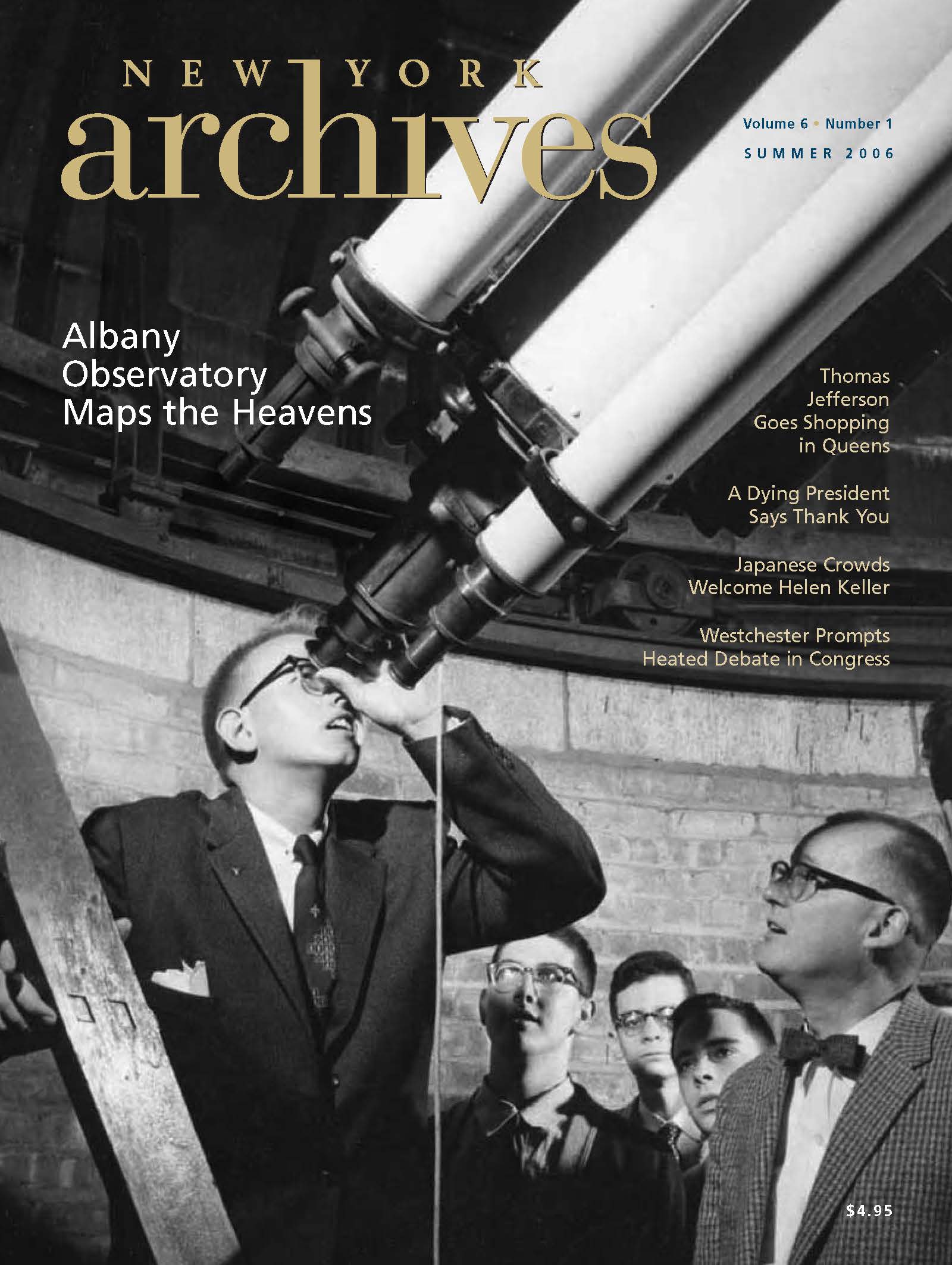 Charting the Stars
Elizabeth Dougherty
Goat Hill in North Albany was an unlikely location for the new science of astronomy in 1856.  Yet over the next 150 years, the Dudley Observatory would help change the way astronomers saw the universe.

The President's Benefactor
Warren F. Broderick
In July, 1885, the dying former president, Ulysses S. Grant, received a little-known but important visitor at his Saratoga County cottage: someone to whom he owed more than money

"On the Tiptoe of Expectation"
Kim E. Nielsen
The indomitable Helen Keller visited Japan twice, in 1937 and 1948: the first time as an American ambassador of goodwill, the second time as an agent of healing and a force for world peace

The Princess of Queens
Peggy Cornett
A nursery established in the 1730s by Robert Prince would soon become the largest supplier of fruit trees and grapes in the New World. Its customers would grow as impressively as its stock

The Female Mark Twain
Kate Winter
If you lived and read books between 1873 and 1914, you surely were familiar with the best-selling adventures of Samantha, Josiah Allen’s wife—but you didn’t know a thing about her creator. Until now.

The Westchester Resolution
Stephen P. Budney
William Jay became a prominent leader of the abolitionist movement—but it took the arrest of a Westchester County resident and some vigorous grassroots action to first propel him toward justice

Goat Hill in North Albany was an unlikely location for the new science of astronomy in 1856.  Yet over the next 150 years, the Dudley Observatory would help change the way astronomers saw the universe.

For most of the nineteenth century, people considered the stars to be fixed in the sky, as if embedded in a spherical black canvas. They also believed that stars moved in lock step—that any movement of one star relative to another was imperceptible, especially when compared to the planets (whose very name means “wanderer”). Even the most learned scientists could scarcely imagine that stars existed beyond our galaxy, or that our galaxy was one among millions.

That perception changed, however, as astronomers developed methods to measure a star’s position in the sky and to calculate its distance from the earth. By carefully recording a star’s precise position, astronomers could detect miniscule movements over time. This paved the way for a three-dimensional view of the heavens, and allowed scientists to determine the shape of our galaxy and its place among many other galaxies in the universe.

This revolution in understanding grew from one major accomplishment: the cataloguing of the stars, a significant portion of which was completed at the Dudley Observatory, a small civic observatory in Albany, New York. When it opened in 1856, Albanians were optimistic that their city would become a center for scientific research. But little did they imagine that Dudley would ultimately advance the very research that would vault astronomy out of the realm of small observatories into the domain of supercomputers, radio telescopes, and deep-space voyages.

Goat Hill Lookout
In the mid-1800s, before radio and television brought entertainment into American homes, communities provided their own intellectual activities. People formed social clubs and invited speakers to lead discussions about science, art, and culture. After one such presentation in Albany by astronomer Ormsby M. Mitchel, a social club decided to make it possible to research what Mitchel had called the “wonders of the heavens” by agreeing to found the Dudley Observatory.

Donations came from several prominent citizens. Thomas W. Olcott, president of the Mechanics and Farmers’ Bank of Albany, assumed the task of fundraising. He persuaded Mrs. Blandina Dudley, widow of the Honorable Charles E. Dudley, former United States senator and mayor of Albany, to show her “appreciation of the project” with a donation of $12,000. The Honorable Stephen Van Rensselaer donated a seven acre plot of land with an unobstructed view in North Albany. By 1854, construction of the first observatory building atop Goat Hill was complete, and the Dudley Observatory formally opened on August 28, 1856.

The benefactors spared no expense to support their new astronomical research center. They hired Benjamin Apthorp Gould, the first American to earn a Ph.D. in astronomy, as the observatory’s first director. Gould had studied at Harvard and had earned his doctorate under mathematician and astronomer Carl Friedrich Gauss at the University of Gottingen, Germany. Upon his return to the United States, Gould determined measurements of longitude for the U.S. Coast Survey and founded the first American journal of astronomy, the Astronomical Journal, in 1849. Along with his expertise, he brought his collection of historically significant astronomical texts, including rare books by Copernicus, Newton, and Galileo, with him to Albany.

Gould outfitted the Dudley Observatory with the finest equipment of the time. Fascinated by the Scheutz difference engine, an early mechanical computer unveiled at the World’s Fair in Paris in 1855, Gould purchased it with funds donated by an Albany stove manufacturer named John Rathbone. Gould also traveled to Germany to commission the Olcott Meridian Circle, a telescope capable of mapping the positions of the stars with great precision. The telescope served Dudley well; as future observatory director Benjamin Boss noted in his book History of the Dudley Observatory, “No telescope of its type has enjoyed a history of accomplishment of equivalent value.”

"From Pole to Pole of the Heavens”
The Dudley Observatory’s prominent research began under the direction of the self-trained astronomer Lewis Boss, who became director in 1876. Around this time, the Astronomische Geselleschaft, a German astronomical society, decided to chart the stars “from pole to pole of the heavens, down to the ninth magnitude, which includes stars sixteen times fainter than the faintest star visible to the unassisted eye,” according to Boss’s son, Benjamin. Lewis Boss chose to participate alongside fourteen world-class observatories by carefully calculating the positions of stars in one slice of the sky. He started late, but was among the first to finish, and followed his achievement with a more ambitious plan to determine the movements of the mapped stars relative to one another as a means to gauge their distances from Earth.

To meet his goal, Boss needed to relocate the observatory itself, since vibrations from trains passing nearby interfered with the precision of the Olcott Meridian Circle. So Dudley was moved to a site on Lake Avenue in southwestern Albany. He also needed a strategy for calculating the stars’ proper motions, since the observatory could not afford a larger telescope, which would have simplified the task. Instead, Boss elected to make a series of precise mathematical computations based on laborious readings from the Olcott Meridian Circle.

Astronomers had to pay close attention as images of stars traversed their field of vision through the telescope, because the precision of their observations would determine the precision of the calculated locations of the stars on the chart. Thus using the Olcott Meridian Circle required intense concentration and patience.

One astronomer would note the precise time when a star passed over each of twenty-seven lines in the eyepiece, while others used mounted microscopes to record the coordinates down to tenths of a second of arc. The east–west axis of the telescope remained fixed, so the earth’s rotation naturally moved the stars across the field of view. To traverse the sky from north to south, the observer moved the telescope manually.

The complexity of a star’s motion, combined with the earth’s rotation, its revolution around the sun, and its wobble on its own axis, all made for equally complex computations. Moreover, while the mechanical moving parts of the telescope were designed for high precision, any deviation—from the slightest defect in a bearing that might cause it to tilt, to the most miniscule inaccuracies in the spacing of the markings on a dial––had to be identified and accounted for in subsequent calculations.

Human Computers
By the close of the nineteenth century, Boss had made enough observations to begin calculations. Since each hour of observation generated twenty hours of calculations, he needed to assemble a team of reliable staff members to help with the mathematics—but he also needed to do it economically. So, following in the footsteps of Edward C. Pickering at Harvard, he hired women as “computers” and paid them about half of the men’s salaries. In a letter written in 1903, according to John Lankford’s American Astronomy, Boss described the women as being “…as rapid and accurate as men and much more patient. In copying for duplicate computations and in all such work, I have found them superior to men.” From 1900 to 1940, Dudley Observatory employed more female computers—eighty by the project’s completion— than any other astronomical institution.

Once Boss completed his observations in Albany, he moved his male team and the Olcott Meridian Circle to San Luis, Argentina to take measurements in the southern hemisphere. Grueling work night after clear night, ever present dust, eyestrain, sleep deprivation, days filled with tedious calculations, and a shipwreck were among the many hardships the men endured. When they completed the measurements in 1937, the Dudley Observatory, then under the stewardship of Lewis Boss’s son Benjamin, published the final General Catalogue of accurate star positions and proper motions—the sole example in the history of astronomy, of such calculations.

However, during those first forty years of the twentieth century, as the Dudley Observatory labored to produce its seminal contribution to astronomy, the productive days of the Olcott Meridian Circle were waning. While the rest of the world of astronomy was evolving rapidly, the astronomers and computers at Dudley, overwhelmed by their mammoth task of observation and computation, hardly had time to pursue more forward-looking research. Wrote historian George Wise in his book Civic Astronomy: “As astronomy exploded, the Dudley dozed.” Yet the effort at Dudley to understand the positions and motions of the stars helped change the way scientists thought about the universe. Astronomers abandoned the concept of a single “island universe” and recognized that many such islands, now called galaxies, exist at mind-boggling distances from one another. These revelations inspired scientists to devise new techniques for studying the universe—for example, spectroscopy, whereby astronomers study light in order to examine the chemistry of the stars. By the middle of the twentieth century, Curtis Hemenway, Dudley’s director from 1956 to 1977, refocused Dudley on collecting “space dust,” using balloons, planes, and rockets to understand the origins of the solar system. Hemenway sustained these investigations until the cost of space research simply became too expensive.

An Educational Mission
Today the Dudley Observatory, located in Schenectady since 1977, performs educational outreach work to support and encourage young astronomers. Director Janie Schwab recognizes that science is becoming increasingly more interdisciplinary, and she has made it a significant part of Dudley’s mission to introduce astronomy to young people by using it to teach them about math, technology, and science. Dudley offers astronomy camp scholarships, funds a Rising Star Internship program that rewards students with telescopes, and helps students host public “star parties” where they learn to find such celestial objects as double stars, galaxies, clusters, planets, and nebulae. Dudley also encourages participation in the New York State Archives Student Research Awards by offering a prize for research that uses material from the observatory’s archives. The power of such programs can transform the way young people see the world around them. By sharing their enthusiasm for the “wonders of the heavens,” they can inspire their communities as Ormsby M. Mitchel did over a century and a half ago—in the singular moment in time that put the Dudley Observatory on the map.