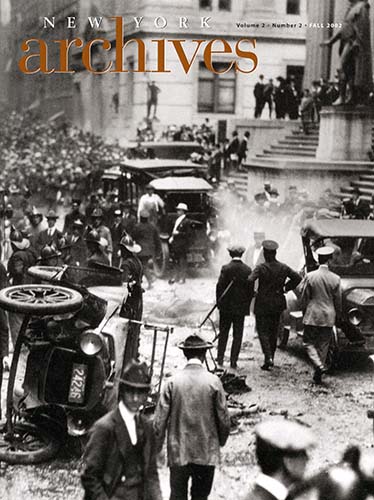 A Tie That Binds: Three Centuries of Family in One Place
Leila Philip
A family's history in the Hudson Valley includes a slave who fought along side his former master

Martha Matilda Harper: The Business of Beauty
Sally Parker
An early female entrepreneur from Rochester invents the franchise-and empowers women in the process

West Point, The "Key to America"

Recalling the origins of the United States Military Academy as it celebrates its 200th year.

In 1775, New Yorkers Christopher Tappan and James Clinton visited and surveyed the Hudson River Valley after the Continental Congress charged the New York Assembly with defense of the Hudson River against British forces in the colonies. Fifty miles above New York City, Tappan and Clinton discovered that the wide, tranquil river suddenly narrowed into a sharp, S-shaped bend with steep cliffs rising to rocky terrain on either side. The swift water and limited space forced ships to slow down so they could negotiate the dangerous passage. Maps taken from Tappan and Clinton's surveys named the promontory on the western bank of the river "West Point."

Recognizing the strategic value of this terrain in controlling navigation on the Hudson, local militia began to build forts on the surrounding hills south of West Point, near Bear Mountain. Inexplicably, West Point itself was not fortified. The intent of these defenses was to prevent the British from using the waterway as a means to isolate New England, considered the heart of the rebellious colonies. To further impede British navigation, an iron chain was forged and stretched bank to bank across the river. Called the "Great Chain," or the "West Point Chain," the links were attached to log booms, since the huge chain would have sunk without these floating supports.

Foreign Aid at West Point
However, the American rebellion was confronting an experienced and numerically superior force, and in 1777 British troops captured and destroyed the forts and the Great Chain. Fortunately, the American victory at the Battle of Saratoga persuaded the British to withdraw to New York City. But as the opposing armies went into winter quarters at the end of 1777, the outcome of their conflict was far from certain.

Then a series of events centering on West Point set the stage for the eventual triumph of the fledgling United States. In January, 1778, General Samuel Parsons marched a garrison of troops from Peekskill across the frozen Hudson to occupy the ground that today is the site of the United States Military Academy. Thaddeus Kosciuszko, the Polish nobleman who had come to America in 1776 to design the fortifications at Saratoga and to help plan the defenses of the Continental Congress in Philadelphia, was given the rank of colonel and traveled to West Point in 1778 to complete its defenses, which had been designed by the French engineer Lieutenant Colonel Louis de la Radiére. Captain Frederick von Steuben, the Prussian Army officer who had journeyed to America to join the rebellion in 1777, arrived at West Point in 1779 to begin drilling and disciplining America's untrained Continental Army troops in the manner he had begun the previous winter at Valley Forge. These technical skills brought to the battlefield by foreign friends made a difference for the American army. To keep an eye on British attempts to move up the river, in 1779 George Washington established his headquarters at West Point, calling it the "key to America."

A Traitor in Their Midst
But the road ahead was not without perils. Major General Benedict Arnold persuaded Washington to give him command of West Point. Arnold had earned his rank by courageous service in many major battles, including Saratoga. He was reputed to be one of Washington's best commanders, and West Point was seen at the time as America's strongest military post. However, Arnold's second wife was from a Philadelphia family loyal to the British Crown, and he may have begun to plot his treason as early as 1778, when he commanded the defenses of that city. In addition, many grievances were shared by the officers of the Continental Army, among them low pay and lack of political support, which undoubtedly contributed to Arnold's traitorous behavior.

By 1780, Arnold had found a British officer, Major John André, to help him carry out his scheme: turn West Point over to the British, and profit personally in the bargain. But André was caught in civilian clothes with the plans of West Point's fortifications--in Arnold's handwriting--hidden in his stocking. André was hanged as a spy at Tappan, New York, but Arnold escaped on a British ship and lived out the rest of his life with his family in England. The British did not ultimately test the defenses of "America's strongest military post," Washington eventually marched south to victory at Yorktown in 1781, and the new United States found a temporary peace with its fractious trading partners in Europe.

No Support for an Academy
Historians, poets, and philosophers have recorded since time immemorial that the end of war quickly erodes support for all things military. For America, it meant the fading from memory of Washington's Continental Army, the trained and disciplined units that had ultimately been victorious. With so many other pressing matters to address, the people and their political representatives soon came to believe that the militia--the "Minute Men" who had won the battle of Bunker Hill so brilliantly in 1775--could be the guarantors of America's military defense. This opinion fit conveniently with the lingering fear that a standing army would become an elite force that supported exactly the sort of dictatorial regime Americans had risked their lives to escape. None of this bode well for the establishment of a military academy, so from 1785 until 1790, with New York City serving as the United States' capital and Washington elected its first president in 1789, there was faint support for any sort of regular army.

As commander of the Continental Army, General Washington had envisioned the creation of an academy to train the nation's military leaders in the art of war. As president, he continued to press for an academy, citing the risky and unsatisfactory alternative of depending on foreign professionals to provide the expertise for modern warfare. Critical among the technical skills needed were gunnery; aiming and adjusting artillery fire; and engineering, situating and building fortifications. Nonetheless, reflecting the politics of the day, Thomas Jefferson, Washington's secretary of state, argued that the Constitution did not grant power to the government to provide for a national academy of any sort. Jefferson was also opposed to the creation of an elite class of military professionals commanding the power that a standing army could wield.

The Need for Education
World events would eventually bring changing attitudes. In addition to the threats posed by hostile foreign interests, education in America became a central concern for the country's future prosperity. While major institutions of higher learning had been educating a small portion of the populace for over a century, their curricula were focused on scholarship, philosophy, and religion. There were no universities for scientists, engineers, or builders. In recognition of the need to impart some technical skills to the country's small army, Congress in 1794 authorized the grade of cadet, and a military school was finally built at West Point. The Army's tiny Corps of Artillerists and Engineers was moved there, and Colonel Henry Burbeck, Chief of Artillery, set up a school in rudimentary gunnery and engineering for cadets and junior officers.

Unfortunately, the school burned down in 1796, and the idea of a military academy languished. In 1799, one of Washington's last earthly acts was to write a letter to Alexander Hamilton, then commanding general of the Army, seeking to endorse a previous correspondence from Hamilton to the secretary of war that laid out plans for establishing a military academy at West Point. President John Adams was a strong supporter of the Navy, since he felt that plying the seas for trade was the lifeblood of the colonies and that using resources to support the nation's merchant and warships was sound policy, unhampered by sensitive domestic issues. But Adams harbored grave doubts about a standing army. Like many of the Founding Fathers, he perceived the threat such an army could pose to the hard-fought liberties they had created and protected; thus the idea of a military academy did not move President Adams to action.

It remained--until Thomas Jefferson became president in 1801--for the coincidence of military threats against the nation's interests to point out the need for a standing army and a military academy to train their leaders. Congress was moved to draw up a bill creating a Corps of Engineers which "...shall be stationed at West Point and shall constitute a Military Academy." In that same year, the secretary of war directed that all cadets training to be artillerists should report to West Point. A school opened in the final days of 1801, and four officers and one civilian were assigned to West Point as instructors and administrators.

A Change of Heart for Jefferson
Although originally opposed to the idea of a military academy, Jefferson had undergone a change of heart as president, motivated in part by the possibility of putting the new academy in Virginia, where cadets could be drawn from families supportive of his own policies and politics. However, prevailing sentiment favored the more remote location at West Point, since any mischief that the professional army officer corps might foment could be more easily isolated and dealt with if kept away from the capital, which by then had moved to Washington.

President Jefferson finally signed the academy bill into law on March 16, 1802. Thus two Virginians, George Washington and Thomas Jefferson, became the founders of the United States Military Academy at West Point (Sylvanus Thayer, army officer and educator, is known as the "father" of West Point). Coincidentally, Washington and Jefferson had also established the first engineering school in America, the first institution of higher learning in America not founded by a religious order, and the oldest continuously occupied military post in the United States. And from the very beginning, it has been New York State that has hosted this great and unique institution.

The US Military Academy Library (http://usmalibrary.usma.edu) maintains extensive documentation of the history of West Point, the Academy itself, and Academy alumni in its Special Collections and Archives. These rich historical collections include extensive book, manuscript, photograph, and cartography holdings, among other formats.

The USMA Archives Collection, comprised of official records of the Academy from its founding in 1802 through the present, is an Affiliated Archives of the National Archives and Records Administration. It includes cadet records, curricular documentation, and information on the campus, as well as correspondence, orders, and other administrative material.