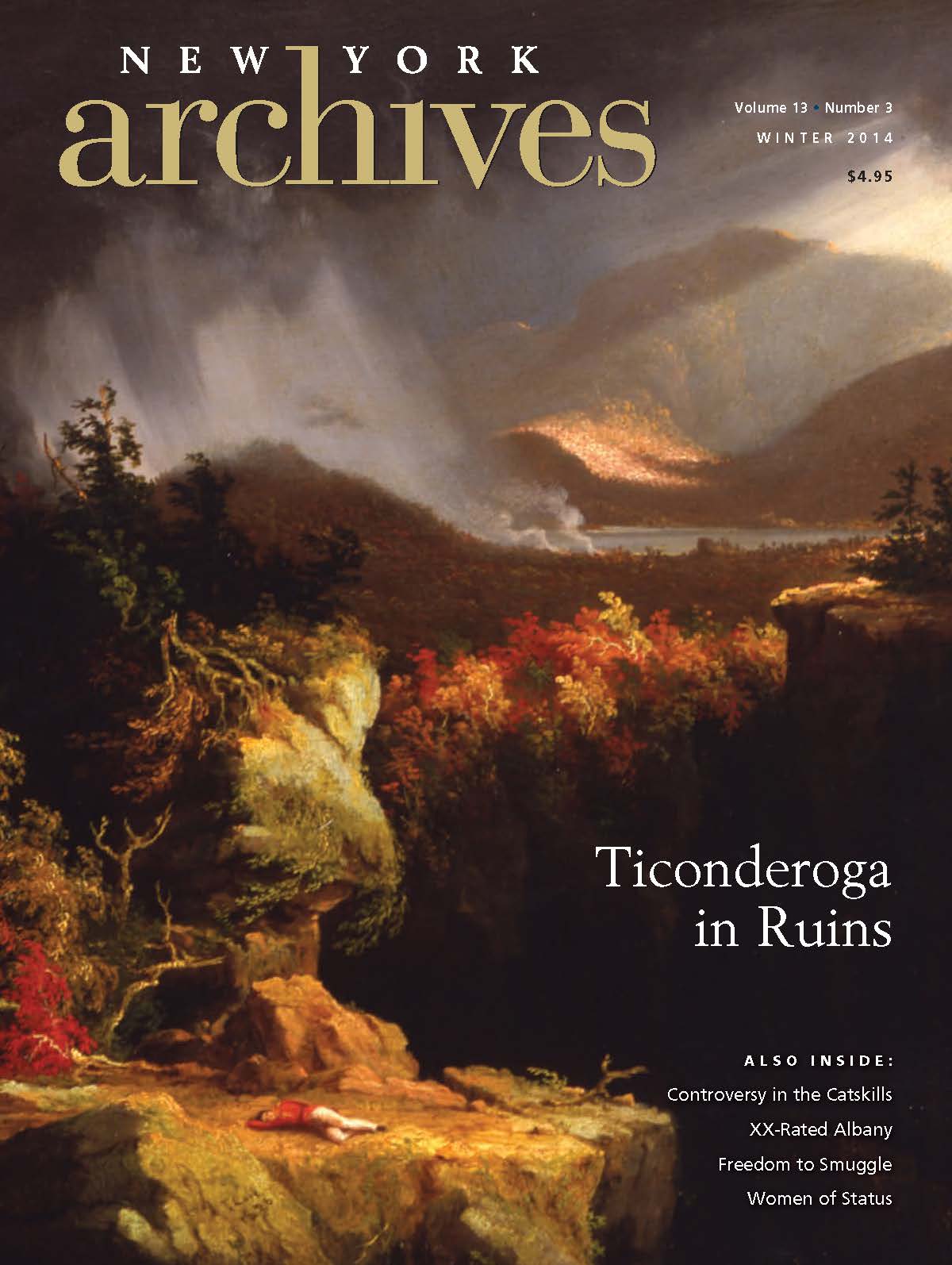 The War on Business
Geoffrey Storm
When the War of 1812 disrupted commerce in an upstate town, the consequences were immediate

History on Tap
Craig Gravina
The three-century brewing history of Albany is embodied in its most famous refreshment, Albany Ale.

Whose Environment Is It?
David Soll
Stewardship of the Catskill Mountains and its resources focused residents on issues that still resonate.

By Thomas A. Chambers

In America's earliest years, emotion became the model for sentimental responses to both landscape and history, particularly at old battlefields. Abigail May wrote during an 1800 visit to Fort Ticonderoga: "I wanted to know all, every particular, of a spot that interested my feelings so much...the heaps of stones on which the soldiers used to cook, the ditches, now grass grown, and forsaken graves!! All, every thing makes this spot teem with melancholy reflections." May belonged to an emerging tourist class that sought out New York State's historic sites; her observations provided one of the first reflections on Ticonderoga's ruins.

Bloody History
The fort, near the south end of Lake Champlain in upstate New York, was the site of several battles and much bloodshed over the course of two great American wars. In 1758, during the French and Indian War, a massive British and provincial army moved against the fort in hopes of expelling the French garrison four to one, British General James Abercromby ordered a frontal assault on outlying French entrenchments before advancing his artillery, but his haste resulted in nearly 2,000 casualties, including over 300 provincials. It was, recalled a veteran, a "sorefull Si[gh]t to behold. The Ded men and wounded Lay on the ground having Som of them thir legs their arms and other Lims broken, others shot threw the body and very mortly wound-ed." General Jeffery Amherst took the fort the next year with little bloodshed.

Ticonderoga also played a part in the Revolutionary War. In the spring of 1775, patriots Ethan Allen and Benedict Arnold seized the old French fort in an early-morning attack. Allen was captured that winter during an ill-advised invasion of Canada, leaving the roughly 1,000 men garrisoned there to suffer from extreme cold, scant provisions, disease, and boredom. Even worse, the soldiers' hastily built log huts stood near the 1758 battlefield, which contained the unburied remains of six hundred Anglo-American dead. Colonel Anthony Wyne called it "the last part of God's work, something that must have been finished in the dark...", an "ancient Golgotha or place of skulls- they are so plenty here that our people for want of other vessels drink out of them whilst the soldiers make tent pins out of the shin and thigh bones of Abercrumbies men."

In 1777, oncoming British forces prompted an American evacuation of the fort, but after the British were defeated at Saratoga in the fall they abandoned Ticonderoga. Congress ordered the fortifications demolished, but after the Revolution Ticonderoga fell into disrepair, a battlefield that embodied vivid, unpleasant memories for Americans with its bleached bones and crumbling ruins. George Washington, who spent many of the Revolution's early years worrying about Ticonderoga, made no comments about it during his July 1783 visit; a European traveling with Washington's party noted only that they "went ashore" to see it. Thomas Jefferson and James Madison delighted in "the botanical objects which continually present themselves," rather than in the "scenes of blood" they passed during a 1791 trip. Although Ticonderoga and its land had become the property of the State of New York in 1785, the site remained too physically remote to attract visitors, and American culture seemed to show little interest in battlefields.

"Mossy Ruins"
That view of history began to change during the early nineteenth century, as tourists like Abigail May began to visit Ticonderoga in larger numbers. The key sites of the Revolutionary War's 1777 northern campaign - lower Hudson River forts, Saratoga, Ticonderoga-lay along the increasingly popular Northern Tour, and a new genre of guidebooks appeared that offered details on attractions, prices, lodging, and the historical background of sites, although tourists often commented on the challenges of travel in an age of poor roads and improvised accommodations. By the 1820s, the standard tour route allowed travelers to sail up the Hudson River from New York City, gaze at the Catskill Mountains, visit Saratoga Springs and Lake George, head west along the newly opened Erie Canal to gawk in wonder at Niagara Falls, and return via Lake Ontario and the St. Lawrence River.

To reach the dilapidated ruins of Fort Ticonderoga, intrepid tourists took a carriage from Saratoga Springs north twenty miles, then sailed or rowed thirty-two miles north on Lake George, ten portaged three miles around the rapids that flowed into Lake Champlain. But all that they finally encountered of the fort's original walls was a stone base topped with logs and backfilled with earth and rubble. According to one tourist, a quick carriage ride past the ruins in 1804 revealed only "[t]wo Old bastions and a pile of stone chimneys..." The fort's most famous feature, the French lines, had been hastily carved from the forest and erected virtually overnight from logs and earth in 1758, but now only overgrown earthen mounds and the crumbling walls of the stone barracks remained. Visitors were allowed to wander about, poking their heads into the fort's remaining rooms and forcing open locked door; one visitor in 1800 scrambled over walls and through the guard room, bakery, gunpowder room, and underground chambers, where she found "some human bones in one of the cells." Ticonderoga's "mossy ruins" and green hillsides sloping down to the lake shore "were still and motionless as death." Only "an old one Story, long stone house" provided rustic accommodations for visitors.

By 1819, the once "venerable Ticonderoga" served as "a pasture for cattle," and attempts to develop the site into a tourist destination fell short of success. Visitor accommodations improved slightly when wealthy New York merchant William Ferris Pell purchased the fort's ruins from Union and Columbia Colleges in 1820 (to which New York State had donated Ticonderoga in 1803). Meaning to construct a rural estate accented with historic ruins, he built a sizeable Greek Revival house and planted ornamental gardens. By 1826, guidebooks praised Pell's "fine inn" at Ticonderoga, which nevertheless housed no more than a few dozen guests at a time.

Making History Personal
As tourism emerged as an American pastime, however, Ticonderoga seemed to possess what Americans wanted most: scenery combined with history. "they are few sites in our country," travel writer Theodore Dwight noted, "that can be compared with this  for a combination of natural and moral interests." Battlefield ruins offered stimuli for musings about valor and warfare and "the great important results arising from them," yet despite reminders that a visit to Ticonderoga "will amply reward the patriotic tourist who loves to visit the places consecrated by the blood of his fathers," most battlefield tourists eschewed these more formal histories in favor of a personal, emotional response. Elkanah Watson, visionary traveler and writer who promoted what would become the Erie Canal, mused about "how many hundred poor dogs have bit the dust in attacking and defending this fortress." He "could not contemplate this pile of ruins, without appreciating the most painful recollections, that several of the companions of my youth...here lie moldering in the dirt." Constructing memory involved direct personal interaction with place, which meant more than the details of a particular battle. ideology or the causes of war remained secondary in their highly personal and very painful reminiscences, emblematic of an age when "a great many Americans wished to carry little or nothing of their past with them." Writer and politician James Kirke Paulding concluded, after a long conversation with an old general that revealed "the contradictions in historical records," that instead of studying history, tourist preferred "reading romances, as more amusing, and at least as true."

Indeed, artist Thomas Cole, considered the folder of the Hudson River School of landscape paintings, Gelyna: A View Near Ticonderoga (1826), on a romantic short story itself based in fact, "Gelyna, a Tale of Albany and Ticonderoga" by Gulian Crommelin Verplanck. Cole's painting seemed to embody the kind of romantic interactions with place that tourists desired. A beautiful heiress, Gelyna Vandyke, fell in love with Major Edward Rutledge whose Royal American regiment marched on Ticonderoga during the disastrous 1758 campaign. Wounded in the fighting, Rutledge was carried from the battlefield by his friend Herman Cuyler, Gelyna's brother-in-law. Atop a rocky cliff, Ruthledge inquired what day it was; "The eighth of July," Cuyler replied. Rutledge's parting words to Gelyna had been the same, marking the date when he would resign his commission and marry his beloved. Seeing that Ruthledge was severely wounded, Cuyler rushed to the French lines for the military courtesy of aid to a fellow officer, but returned to find only a bloody track to "a bare open rock," which "commanded a view of Lake George." Rutledge lay dead; Cole's painting captures this tragic moment and the cultural essence of early-nineteenth century battlefield tourism.

The Romantic Past
By the 1830s, this kind of sentimental response dominated visitors' reactions to Ticonderoga. In the words of one diarist, the military past served only to highlight "the feelings it excites. When we stood upon its fallen and deserted walls, and reflected upon the quietness and solitude, that reigned around the ruins, it naturally excited like comparisons between its present situation and the time when it exhibited all the formidable appearance, and preparation of war; when its beautiful plains sounded with the confusion of clustered armies." Visiting battlefields certainly provided better lessons than dull history books; tourists sought scenery and romantic allusions, favoring sentimental remembrances over gore and ideology.

Well into the 1850s, visitors (especially women) preferred to spend their time "sketching and wandering about the fortifications" instead of rehearsing the fort's battles. In September 1852, visitor jane Caroline North, intrigued by the fall foliage, "passed the afternoon waling over the hills, examining the Ruins & enjoying the pretty prospects all around." The contrast between the site's martial past and the crumbling walls and cultivated fields, perhaps the resting place of a dead soldier, made her "solemn." Summing up her experience, she wrote, "The evening was delightful, the air just cool enough, & the rich green carpet of Nature's handiwork softer than any velvet. It is a walk & afternoon to be remembered!"

This kind of pleasant reminiscence met the goal of nineteenth-century tourists. Although Ticonderoga was one of the few historic battlefields in the United States whose fortifications remained, history played only a secondary role in visitor's encounters with it.

One of the best early accounts of traveling in New York State is Elkanah Watson's collection of journals, housed in Manuscripts and Special Collections at the New York State Library. Historical travel guidebooks, such as Theodore Dwight and Henry Dilworth Gilpin's Northern Traveller series (1828), and Benson Lossing's Pictorial Field Book of the Revolution (1852), are also important sources. The Thompson-Pell Research Center at Fort Ticonderoga holds an extensive collections of manuscripts travels accounts and military records, as well as visual depictions of the fort's ruins.