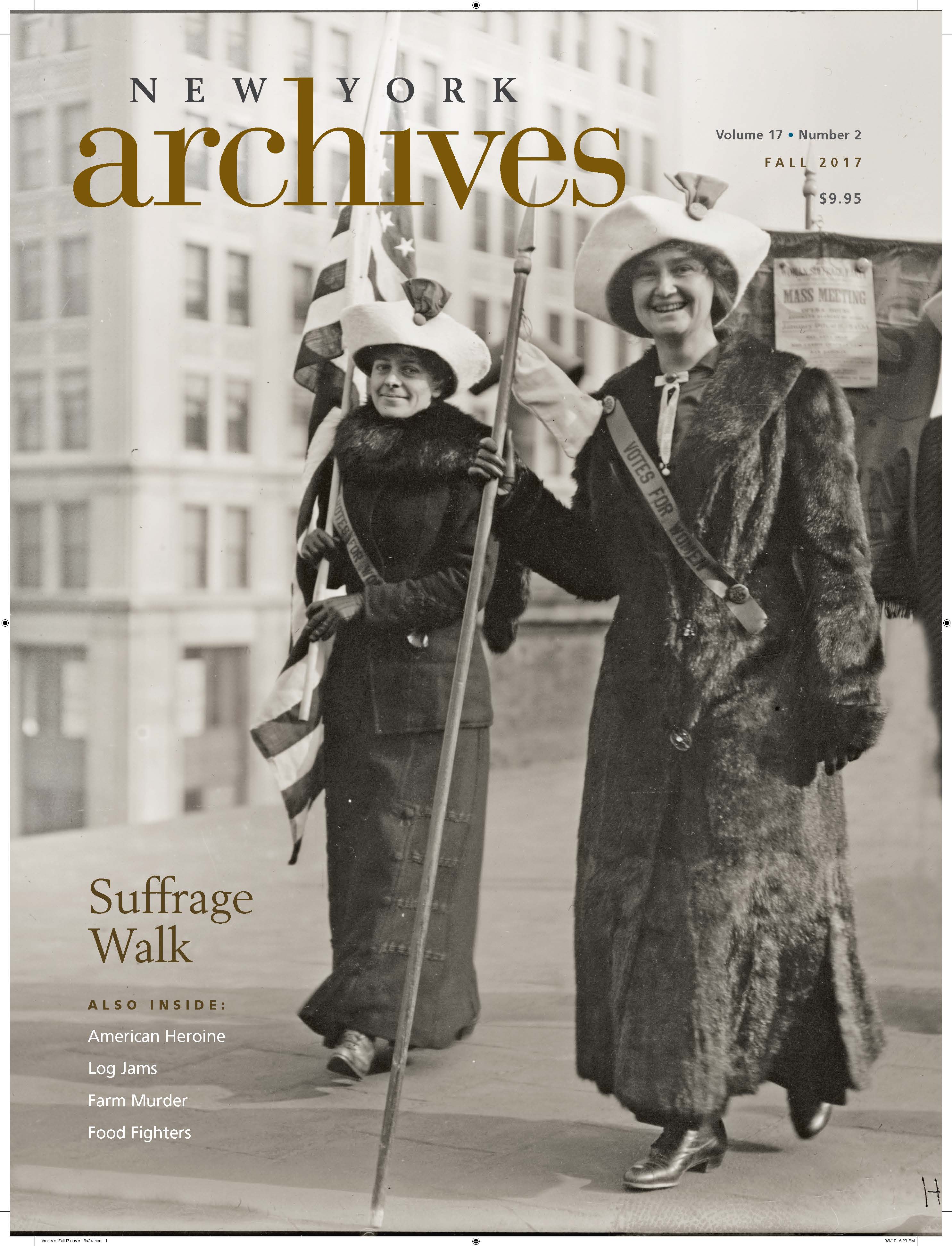 Rosalie’s Army of the Hudson
Vicki Weiss
Wealthy Rosalie Gardiner Jones organized a pilgrimage and used the press, catalyzing the cause of woman suffrage in New York State.

Adirondack Log Jam
Stephen Cernek
Massive log jams from Adirondack timber drew onlookers as they made their way down river on the Hudson.

Hot Shot Heroine: Betsy Doyle and the War of 1812
Catherine L. Emerson
A soldier’s wife and matross proved her bravery during a marathon bombardment at Fort Niagara.

Kitchen and Garden Soldiers
Libby O’Connell
“Food Will Win the War” became a domestic battle cry during WWI as housewives and children were asked to serve on farms.

“Food Will Win the War” became a domestic battle cry during WWI.

Soon after the Congressional declaration of World War I on April 6, 1917, national, state, and local agencies began an information campaign aimed at the civilian population, declaring, “Food Will Win the War.” With the communications power of the Committee on Public Information (CPI) combined with the administrative efficiency of the United States Food Administration (USFA), the way Americans produced, cooked, and conserved food was transformed from a humdrum chore into a celebrated act of patriotism. Food became the centerpiece of home-front support for the war.

Patriotic Meals
New Yorkers were no exception to the effectiveness of this appeal. Gardening, cooking, and conserving the right foods provided a platform for displaying engaged patriotism. Nut loaf and egg casseroles replaced meat dishes. A fragile and fascinating scrapbook compiled during the Great War, now held by the New York State Library, contains a variety of “war-winning” recipes clipped from periodicals.

Increasing food production was as important as reducing meat and wheat consumption, but with farm hands called up for military service, farmers faced labor shortages. With the goal of mobilizing civilian youth, the USFA worked with the Departments of Labor and Agriculture to encourage high school students to spend their summers working as farm hands. The New York Farm Cadet program, part of the US Boys’ Working Reserve, organized young people between the ages of sixteen and eighteen in good academic standing from around the state to work for modest wages plus room and board. Girl Cadets, known as “Farmerettes,” also participated. The state required the Cadets and Farmerettes to write memoirs in order to receive academic credit for any school they may have missed while working as farmhands.

The New York State Archives contains several of these handwritten memoirs, earnest records of long days and hard work on New York farms in the summers of 1917 and 1918. Written as assignments, not as personal journals, the students expressed an apparently sincere desire to contribute to the war effort—and their conviction that they had accomplished this goal. As Farmerette Vera Bennett wrote proudly in September 1918, “I was one of the High School girls to give my service to help win the war.”

At the federal level, one week after the declaration of war, President Woodrow Wilson established the CPI, more commonly known as the “Creel Committee for Commission” after its chairman, George Creel. Creel was a former journalist with a law enforcement background, who believed strongly in the unifying power of words and images. He would later write in his memoirs that he asked Wilson to create the government agency to coordinate “not propaganda as the Germans defined it, but propaganda in the true sense of the world, meaning the ‘propagation of faith.’” Creel appointed experts in the growing fields of public relations and advertising to convince Americans from all walks of life to support the war effort.

Citizen Farmers
Government propaganda in popular magazines, newspapers, and the colorful posters for which the era is justly famed, encouraged civilians’ active involvement in achieving victory. Often, these platforms were designed and written by the CPI, but stamped with the name of state commissions or local groups, to be more regional and neighborly. Draped in patriotism, almost all of the materials focused on getting civilians to take action. Creel recognized that most citizens who actively participated would do more than simply accomplish war-related tasks. They would strengthen their emotional commitment to support the war.

Mobilized civilians engaged on the home front in a variety of ways. With male factory workers headed off to war, posters and brochures encouraged young women to work at munitions factories and other wartime-related industries in a fashion we often associate with World War II and “Rosie the Riveter.” Newspapers and posters encouraged people of all ages to buy war bonds and contribute to charitable agencies such as the Salvation Army, the YWCA, and the American Red Cross.

Relief Effort
The theme of food production and consumption waved perhaps the largest and most striking banner for civilian mobilization. Even before the US officially entered the war, Americans from diverse backgrounds— society ladies to immigrant laborers —participated in world hunger relief to help starving Belgians and other civilian populations. Herbert Hoover, a wealthy and charismatic engineer, organized this massive food drive, formally known as the Committee for the Relief of Belgium. The CRB ultimately shipped five million tons of food to the Belgians and the French whose homes and farms had been devastated by the most catastrophic war the world had ever known. The actions of the CRB set high standards for efficiency and scale of volume that became the pattern for other large scale relief efforts before and after the war.

Once the United States joined the allies, the issue of food production and food conservation became a double-pronged theme to win the war. First, the allies and our military needed the extra provisions. The food supplies in Britain and France were running dangerously low, due to the German submarine blockade, bad weather, and the devastation of farms on the continent. Secondly, the voluntary participation by women and children in the campaigns for decreased consumption seems to have increased their fervor for war efforts. They weren’t simply cheering on the men, but were active domestic participants.

Kitchen Gardens, Kitchen Soldiers
Even President Wilson announced that “everyone who creates or cultivates a garden helps, and helps greatly, to solve the problem of feeding the nations—and that every housewife who practices strict economy puts herself in the ranks of those who serve the nation.” Women became the “kitchen soldiers.”

Wilson appointed Hoover as the head of the newly created US Food Administration (USFA) in August 1917. The younger man’s remarkable organizational abilities, combined with American generosity, had resulted in a uniquely successful global relief effort. He would lead a vast, national bureaucracy with 3,000 paid staff and 800,000 volunteers across the country. The USFA’s enacting legislation, known as the Lever Act, enabled Hoover to implement a system of rationing and other food requirements. However, Hoover firmly believed that the job could be done on a voluntary basis.

Throughout the eighteen months of the American participation in the Great War, the government urged frugal food practices but never legally required them for citizens. Sometimes, peer and community pressure made this voluntary rationing barely optional. Overall, however, the campaign that “Food Will Win the War” proved immensely successful, both in bringing a sturdy patriotism into the domestic sphere of kitchens and schools, and by achieving the specific wartime food production aims.

The Creel Committee expanded the impact of Hoover’s USFA work. The two organizations worked together to increase agricultural production and decrease home-front consumption of the types of food needed overseas by our allies and by our troops at training camps.

The press played a vital role in encouraging volunteerism, donating space for nationally-created messaging that linked good citizenship and patriotism with saving food at home and increasing food production at farms, school yards, and home gardens.

The State Archives’ remarkable collections include many examples of these strong voices from the World War I era. Newspaper inserts proclaimed, “Our Food Gospel: Eat Less, Serve Less, Waste Nothing” and “Loyalty in Little Things last Proof of Patriotism.” The Albany County Home Defense Committee published a brochure from the USFA. In a column titled “Win the War By Giving Your Daily Service,” they reminded New Yorkers to “save the wheat, save the meat, save the milk” and other daily foods, recommending wheatless days and meatless days. Perishable items such as local fruits and vegetables were to fill in any gaps on the plate.

They also wrote USFA-approved recipes for wheatless bread, meatless main dishes, and low-sugar treats, published in women’s magazines and other periodicals. From large national publications such as Good Housekeeping to regional favorites such as the Midwest’s The Farmer’s Wife to local women’s bulletins, the USFA proclaimed its message that food would help win the war.

Under the banner of food, the Creel Committee and the USFA inspired farmers, women, and children to work hard for the cause. They were encouraged to perceive themselves as competent activists in the pursuit of victory, not just flag-wavers. Through these civilian efforts, America was able to provide much needed food for the Allies and for its own troops. As a weapon against starvation, malnourishment, and unrest overseas, and disaffection at home, food would help win the war.

The New York State Archives maintains a number of collections related to food efforts during WWI, including the enlistment papers, reports, administrative records, and manuals of the Farm Cadet Program; a scrapbook of records relating to the New York State Food Supply Commission; and the New York State Defense Council administrative and correspondence files, which contains reports on the work of the Commission. Manuscripts and Special Collections at the New York State Library holds a number of posters produced in conjunction with food supply efforts, along with an account book, originally kept by Coopers Plaine, New York, postmaster Francis Cooper in the late 1850s. Later generations covered over pages of the account book with “war-winning” recipes clipped from periodicals during the Great War.