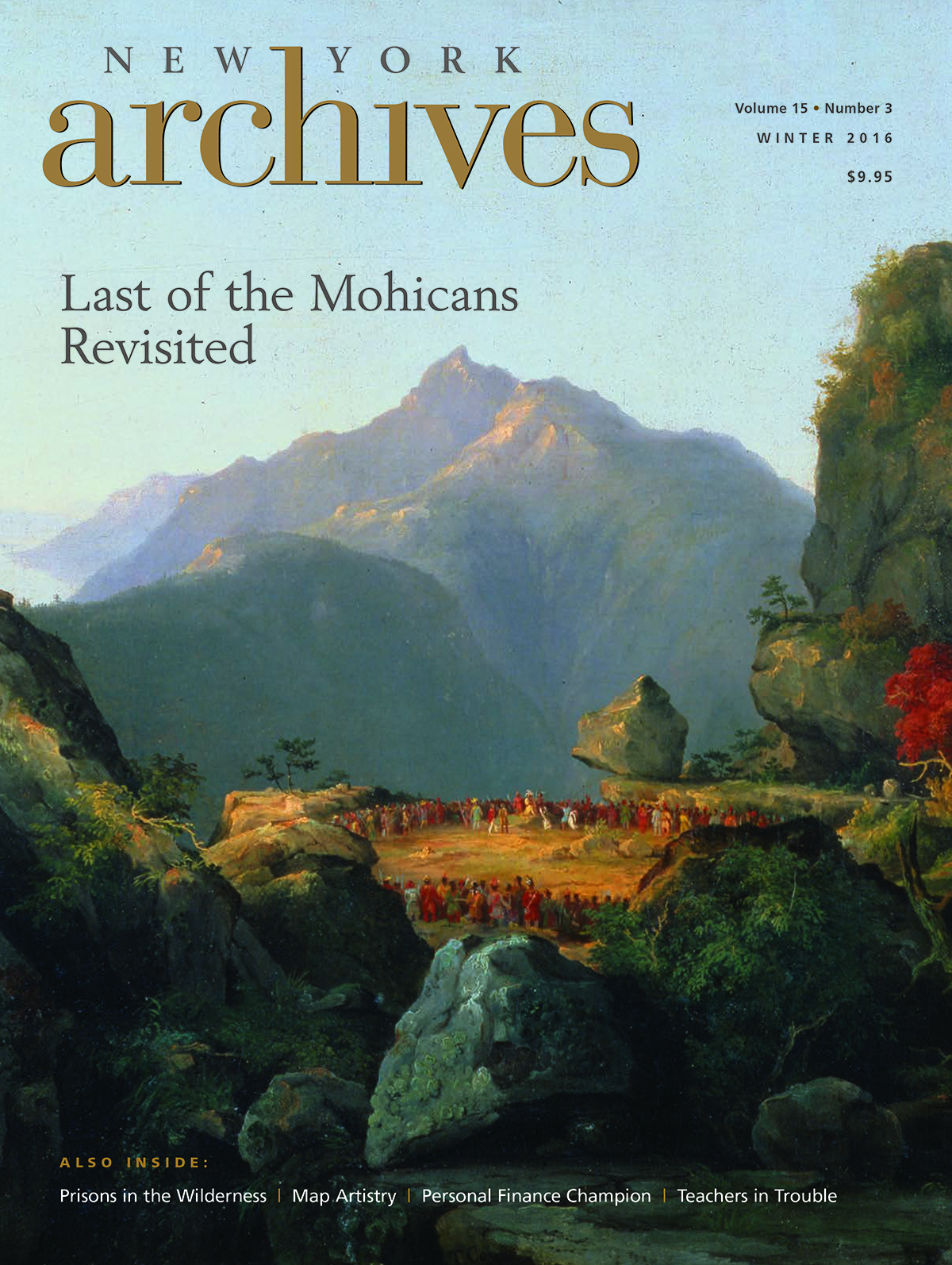 Up the River and to the Woods
Clarence Jefferson Hall Jr.
The unforgiving wilderness of the Adirondacks is an unfortunate backdrop to a long history of prison escapes.

Financial Crusader
Tracy Lucht
Sylvia Porter paved the way for women in an industry dominated by men, and also helped to establish an industry known today as “personal finance.”

Teachers on Trial
Lisa Harbatkin
While national hunts for Communists in the country raged on, a lesser-known red fever caught on with teachers as the target.

On its front page, above the fold, the Albany Atlas and Argus carried an obituary, titled “Death of an Old Citizen” on April 10, 1865:

Mr. David Vaughan, a well-known citizen of Albany, who has been for many years employed in the various departments at the State House, died on Monday... [at] 62 years of age, a worthy and exemplary man [who] was famous for his excellent penmanship. Many very beautiful specimens of his work are in our public offices.

The obituary merely hints at the artistry of his maps, often decorated with illustrations, like insects, fauna, and patriotic symbols.

In his celebrated career, Vaughan drafted several hundred manuscript maps of New York State, along with other documents, primarily for state agencies in the mid-nineteenth century. The most recognized examples, now held in the New York State Archives, come from his employment with the State Engineer and Surveyor in the 1850s and early 1860s, where he worked on plans and maps for the first enlargement of the Erie Canal and the construction of several lateral canals.

Vaughan came to Albany from Ireland around 1847, already skilled in drafting and surveying; David worked with his father and brother as a surveyor in the 1830s. His portfolio of “Maps of the Estates of Charles Nesbit” (1834), now at the National Library of Ireland, shows the same flourish and whimsy that characterize his Erie Canal work.

In Albany, Vaughan initially worked with archivist Edmund O’Callaghan, who was overseeing the documentation and preservation of New York’s colonial history. Vaughan played an early and essential role in that effort, reproducing, among other maps, the “Map of the Manor Rensselaerwick” from the original owned by General Stephen Van Rensselaer of Albany, “Champlain’s Map of New France” of 1632, and the John Wigram 1798 map of southern Columbia County.

Flourisher and Calligrapher
Vaughan’s first employment by the newly established office of the State Engineer and Surveyor came in 1850, assigned to drafting maps and plans for the enlarged Erie Canal. He quickly received respect and recognition from his managers. One of his most remarkable manuscript maps, part of a survey portfolio of the Erie Canal in the Mohawk Valley, dates from 1851, soon after he joined the canal office. Large watercolor drawings of the Noses, a valley landmark, dominate several pages. Although these maps were public records, Vaughan’s decorative additions appear to have been tolerated, if not encouraged, by his supervisors. On one map he signs himself not as “draftsman” but as “flourisher.” Sometimes he appears to have tested his abilities by making miniscule drawings of flies, probably not uncommon visitors on his large drawing sheets in the open-window offices of State Hall at State and Lodge streets in downtown Albany. He was best known for his calligraphy and was often called upon to illustrate the title pages to portfolios of maps and ledgers of final estimates for canal work.

Symbols and Motifs
Vaughan’s drawings are replete with symbols reflecting his citizenship in the young republic. The Stars and Stripes is a very common motif in his canal work, as is the American eagle. Some of the motifs from his Irish work are also present, particularly the running stag, deer and a buzzing beehive. Though he may have simply enjoyed drawing them, he must have been aware of the symbolic implications they carried, such as the running stag, which in European folklore describes transition between two worlds. It has sometimes been associated with Saint Patrick. In Vaughan’s case, the symbol may represent his own transition between Ireland and his new home.

The use of the beehive is more difficult to explain. Though the beehive generally represents industriousness, a fellow Irish immigrant may have quietly understood another possible reference, suggested by Vaughan’s labeling a cluster of beehive drawings as “Irish Beehives.” Vaughan certainly would have been familiar with the ancient structures in Ireland known as Clochán––Irish beehive huts––so perhaps he was really using an Irish symbol to make an indirect reference to his own background.

Drawing New York
Vaughan’s work was highly valued by the engineering corps in Albany. More than two dozen of Vaughan’s maps were formally published in the annual reports of the Canal Commissioners and the State Engineer and Surveyor. They included: an 1861 copy of a 1794 map for the Proceedings of the New York State Commissioners of Indian Affairs; Sweet’s 1862 Map of the State of New York showing its Canals and Railroads; and a January 1864 portfolio of maps and plans for gunboat locks on the Erie Canal that would enable Civil War gunboats to reach the Great Lakes in case hostilities developed between the United State and Great Britain. While still beautifully decorated and meticulously drawn, the portfolio shows great restraint in Vaughan’s artwork when compared with that of a decade earlier.

Vaughan’s professional and personal life underwent great change in the early 1860s. Engineering staff reductions at the outbreak of the Civil War meant less work for draftsmen; at the same time, he began to experience mental health problems, and by 1864 he had essentially stopped working for the State Engineer and Surveyor. In December, Vaughan was committed to the New York State Lunatic Asylum in Utica, his wife noting that he had “acted very strangely, talking incoherently and very loudly, refusing to eat.” He died at the asylum in April 1865, the cause of death listed as “phthisis” or “congestion of the lungs.” While the larger cause of Vaughan’s sudden decline is unknown, his talent and character live on in his work, carefully preserved at the New York State Archives and in private collections.

Recently, the New York State Office of Mental Health denied an appeal to release Vaughan’s Utica Asylum files, now housed at the New York State Archives, saying that doing so would violate state mental health laws protecting patient privacy, even for those who died in the State’s custody ages ago. At the time of Vaughan’s death, these admission records amounted to biographical statements with little sense of clinical information by modern standards. In Vaughan’s case, the record is an account of his life as an immigrant and worker on New York State’s Erie Canal.

In the 1970s, the late Richard N. Wright of the Onondaga Historical Association in Syracuse shared his notes with me. They are the inspiration for this story. In the 1950s, Wright’s research brought recognition to Vaughan’s life and work. Well before the State Archives was established in 1971, he was instrumental in saving and preserving hundreds of Vaughan’s manuscript maps and portfolios. Additionally, Mary Cahill of County Meath, Ireland, began investigating Vaughan’s Irish background, providing the essential documentation to link him to the surveying family of Vaughans in Ireland—his father and brother—and provide details about his other siblings and mother.