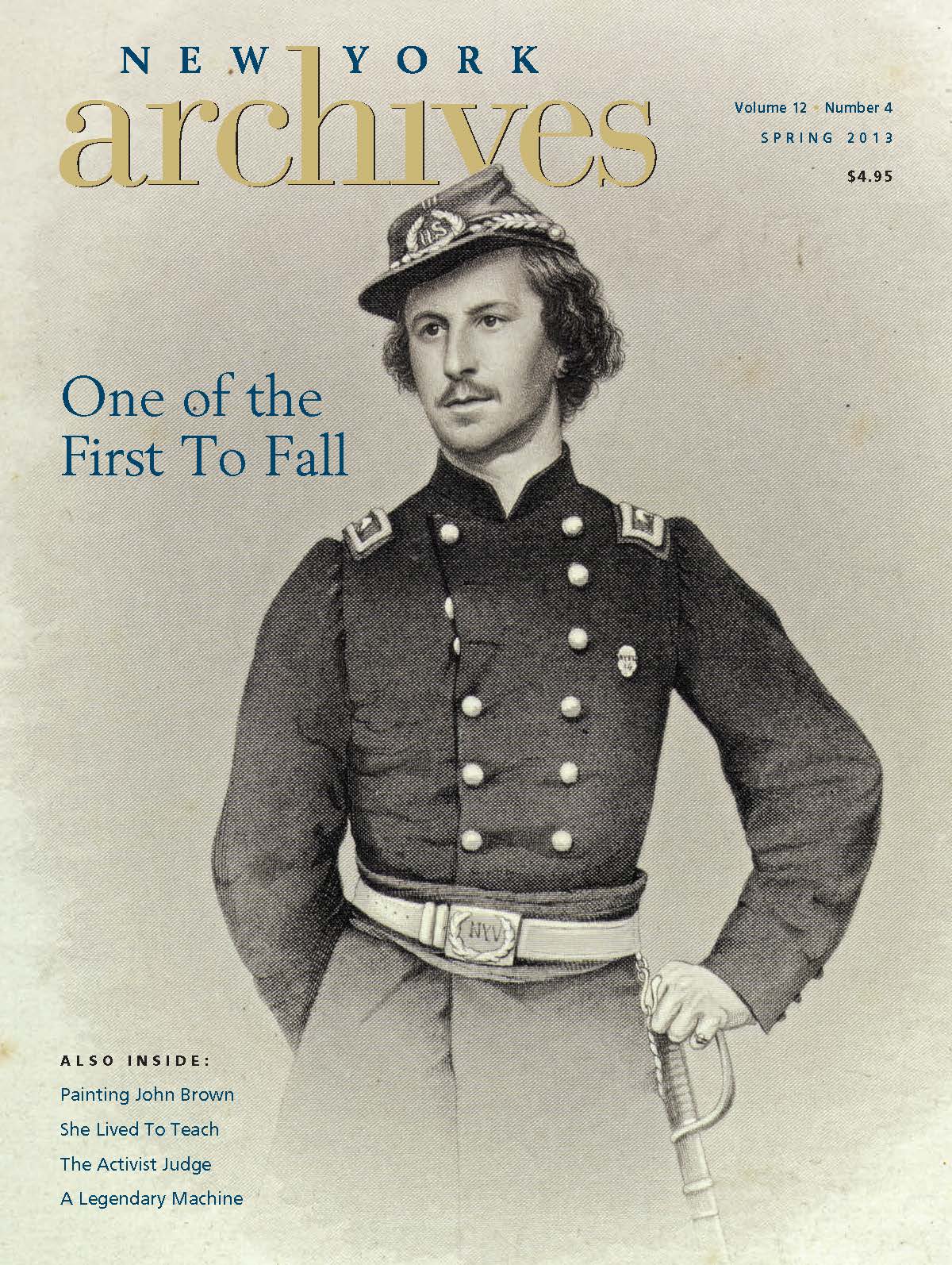 In Defense of the Union
William F. Howard
The murder of a young Union colonel in the Civil War’s second month was a blow to his friend, President Lincoln.

The Bearded Patriarch
Warren F. Broderick
What would become the
iconic portrait of abolitionist John Brown was painted by a little-known artist in Utica.

“A Natural Right to Knowledge”
Denise Roe
When Myrtilla Miner opened the nation’s first school for black girls in 1851, she also learned––from necessity––how to shoot a revolver

Daughter of the Empire State
Jacqueline McLeod
Judge Jane Bolin’s legacy was greater than her series of “firsts” as an African American woman.

The Business of Politics
Robert A. Slayton
Tammany Hall knew how to win elections, but not how to forestall chaos in the process.

“A Natural Right to Knowledge”

Teacher Myrtilla Miner from Madison County, New York was a feminist and abolitionist who went South to teach. What she saw caused a revolution in her—and in education.

Myrtilla Miner traversed time, distance, and taboos in the antebellum era for a cause: education for black girls and women. As a white feminist and abolitionist, her beliefs about women and African Americans were joined with her conviction that education could be used as a tool to uplift oppressed groups. At a time when women were not typically educated beyond domesticity or some elementary schooling, and blacks were not educated at all, Miner opened the first school in the country dedicated to the training of black female teachers.

An Early Passion for Education
Myrtilla was born in 1815 in North Brookfield, Madison County, New York to early settlers Seth and Eleanor Miner. Theirs was a large farming family, dependent on their hops harvest. Seth Miner was involved in the establishment and support of the First Day Baptist Church in Brookfield. He also swore the Oath of Allegiance and Abjuration, which renounced allegiance to the English commonwealth, in order to serve as a lieutenant in the local militia. As a young girl, Myrtilla dreamed of studying beyond the education available to her. She corresponded with William H. Seward when he was New York’s governor (and later its U.S. senator) to request that the government provide support to females for advanced education so they could then train youth for the “necessities our beloved country requires.” Despite her frail health, Myrtilla later taught locally and worked in the hop fields to earn money for her own education until a headmaster accepted her as a student on credit at the Young Ladies Domestic Seminary in Clinton, Oneida County. She arranged to pay her tuition upon receiving employment.

Miner did pay her tuition; she taught at the Clover Street Seminary in Rochester and at public schools in Providence, Rhode Island from 1844 to 1846. In Providence she was influenced by Henry Barnard, known as the “scholar of the educational awakening of the antebellum period”; because of his inspiration, in 1847 she began teaching at the Newton Female Institute at Whitesville, Mississippi. Horrified by the South’s oppressive slave conditions and determined to improve them, she was nonetheless refused permission to teach African American girls. Her subsequent attempts to improve their situation proved fruitless, and this affected her health; after two years in Mississippi, she returned home seriously ill, but the experience ignited an idea in her to open a school in the North that would train young African American girls to become teachers, and this resolve strengthened her. She believed that every human being had “both a natural right to knowledge and the potentiality for achieving it.”

A Dangerous—and Necessary—Idea
Miner’s radical idea for a school for black girls—which she wanted to open in the nation’s capital—as well as her own courage, perseverance, and fortitude, attracted support and encouragement from the Quakers, including Reverend Henry Ward Beecher, Harriet Beecher Stowe, Johns Hopkins, and others. It was a monumental undertaking for the time; even Frederick Douglass tried to dissuade her from the project, fearing for her safety, since slavery was still acceptable and legal in Washington, D.C., a stronghold of pro-slavery sentiment. It was also a crime to teach a slave to read in the South. However, there were more than 8,000 free African Americans in Washington whose education was not prohibited by law.

With $100 contributed by the Quakers, on December 3, 1851 Miner arrived in Washington and opened a small school in an apartment. She had six pupils; within two months, their number totaled forty. She wrote in a letter to her friend Hannah in 1852, “I have never before felt myself exactly in my own ‘niche,’ fully satisfied with the work I had to do; because I never before realized all the benefits resulting to the world from my labors that I hope are embodied here…After seeking out and stimulating to earnest exertion forty bright pupils for six months, you should see me try to get aid to build a schoolhouse for them; you should see all the letters I write for that purpose, and then see all the people I am obliged to call upon; …and see the many times I walk a mile to accomplish this, besides teaching five days in the week and doing most of my sewing. I am already very thin and pale, and have a walk of one mile to school each day, besides all else”—since it was difficult to find living quarters for one who ran a school such as hers.

Of course, resentment was strong against Northern abolitionists meddling with local institutions. Miner fended off numerous physical attacks on the school, including stonings and arson, by learning to shoot a revolver out in the open so that everyone would know she meant business. By 1858, she had raised enough funding to move the school to a three-acre lot on the edge of the city; Harriet Beecher Stowe donated $1,000 toward the school with income she received from Uncle Tom’s Cabin. Miner also established a board of trustees (including Henry Ward Beecher and Johns Hopkins) and saw six graduates of the Colored Girls School, as she had named it, go on to teach in schools of their own.

However, these efforts took a further toll on Miner’s health, and in 1857 Emily Howland, an active abolitionist, philanthropist, and teacher from Sherwood (Cayuga County), New York, assumed responsibility for the Colored Girls School. In 1861, Miner traveled to California in an attempt to regain her health, as well as raise some West Coast funds to expand the school. However, the Colored Girls School closed during the Civil War, but about seven weeks after the issuance of the Emancipation Proclamation in 1863, Senator Henry Wilson of Massachusetts introduced a bill for the incorporation of the newly renamed Institution for the Education of Colored Youth. A congressional charter was granted, thereby legalizing the institution. Tragically, Miner suffered critical injuries in a carriage accident in California in 1864. She returned to Washington, D.C., but on December 17 she died at the home of Mrs. Nancy M. Johnson, president of the school’s board of trustees.

Myrtilla Miner is buried in Oak Hill Cemetery in Georgetown, where she rests with some of the nation’s most distinguished leaders. The impact of her pioneering efforts persists not only through the school’s enduring success but through the thousands of teachers who graduated from the earlier institutions and the youth who learned from those teachers. Mary Treacy, former librarian at the District of Columbia Teachers College, describes Miner as a woman who “recognized the possibilities, established standards, and found the means to reach high goals…who lived by the principles that inspire 150 years later; all this shows what one energetic woman…can accomplish in the face of the most disheartening obstacles.” Today, students of all colors can indeed be inspired by this visionary nineteenth-century educator from rural upstate New York who fought for education as the best tool for a productive life for all.

Copies of Myrtilla Miner’s letters to Governor (and Senator) William Seward are in the University of Rochester Library. Richard Williams, Town of Kirkland historian, supplied access to the archives of the Young Ladies Domestic Seminary in Clinton, where Miner was a student. Through a grant from the New York State Archives, the Madison County Clerk’s office discovered, catalogued, cleaned, and preserved additional archival documents related to Miner’s life and career, as well as to the lives and history of other Madison County residents; these can be found at madisoncountynewyork.com. Other resources on Miner include Myrtilla Miner, A Memoir (1885) by Ellen M. O’Connor, and Three Who Dared (1984) by Philip S. Foner and Josephine F. Pacheco, which references the Myrtilla Miner Papers in the Manuscript Division of