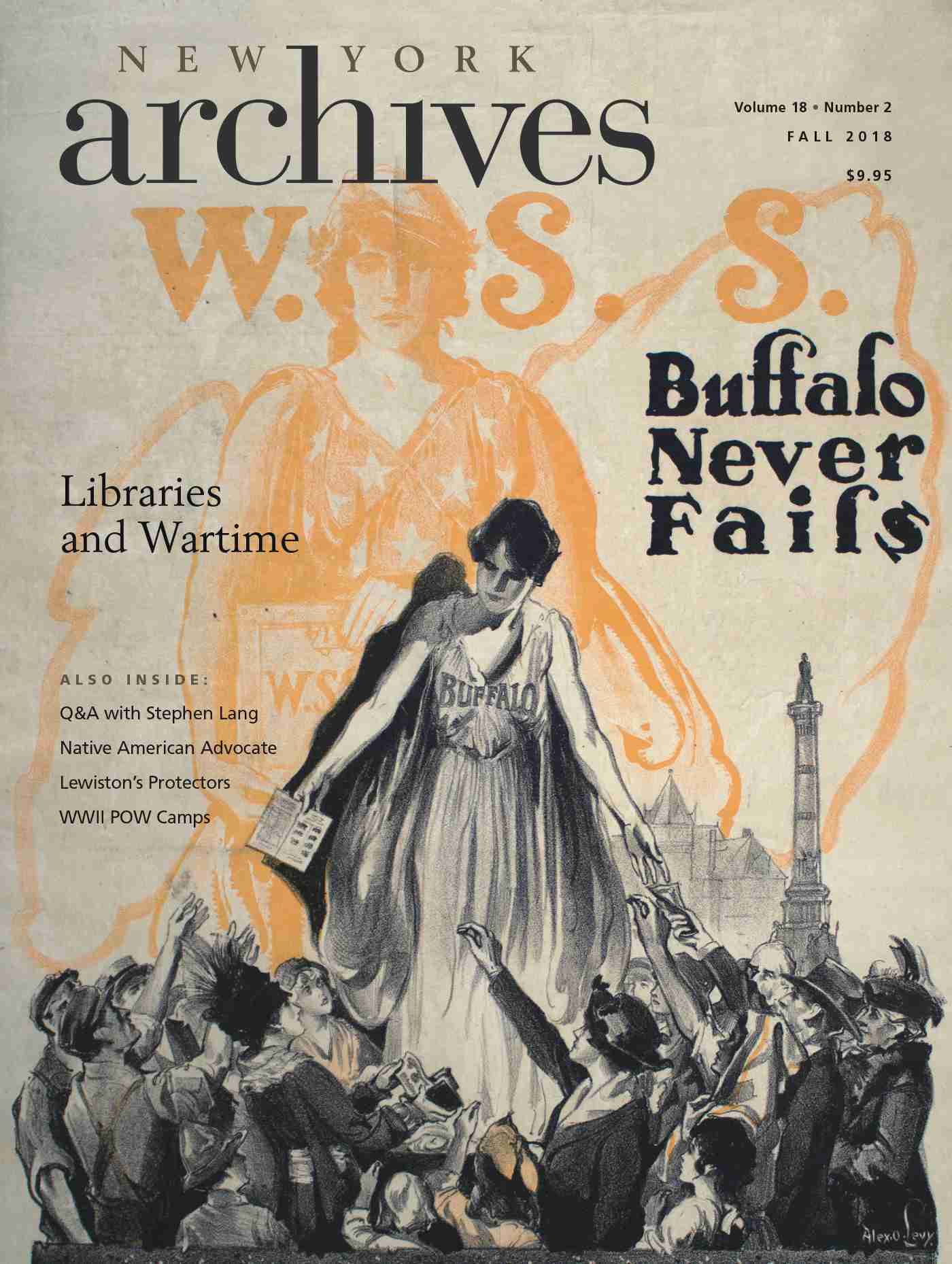 Wartime Reading
Sue Cutrona
Libraries did much more than lend books during the Great War. They met wartime interests and joined the cause.

Monumental Thanks
Lee Simonson
The citizens of Lewiston erected a monument to honor the courage and sacrifice of the Tuscarora Nation during the War of 1812.

Developed specifically for educators, this guide is aligned to the New York State Social Studies Framework. Learning objectives are taken directly from Social Studies practices and content fits within the framework. Paired with an article from the Fall 2018 issue, the Educator Guide also includes supporting questions to direct students reading the articles and analysis questions for understanding primary sources. 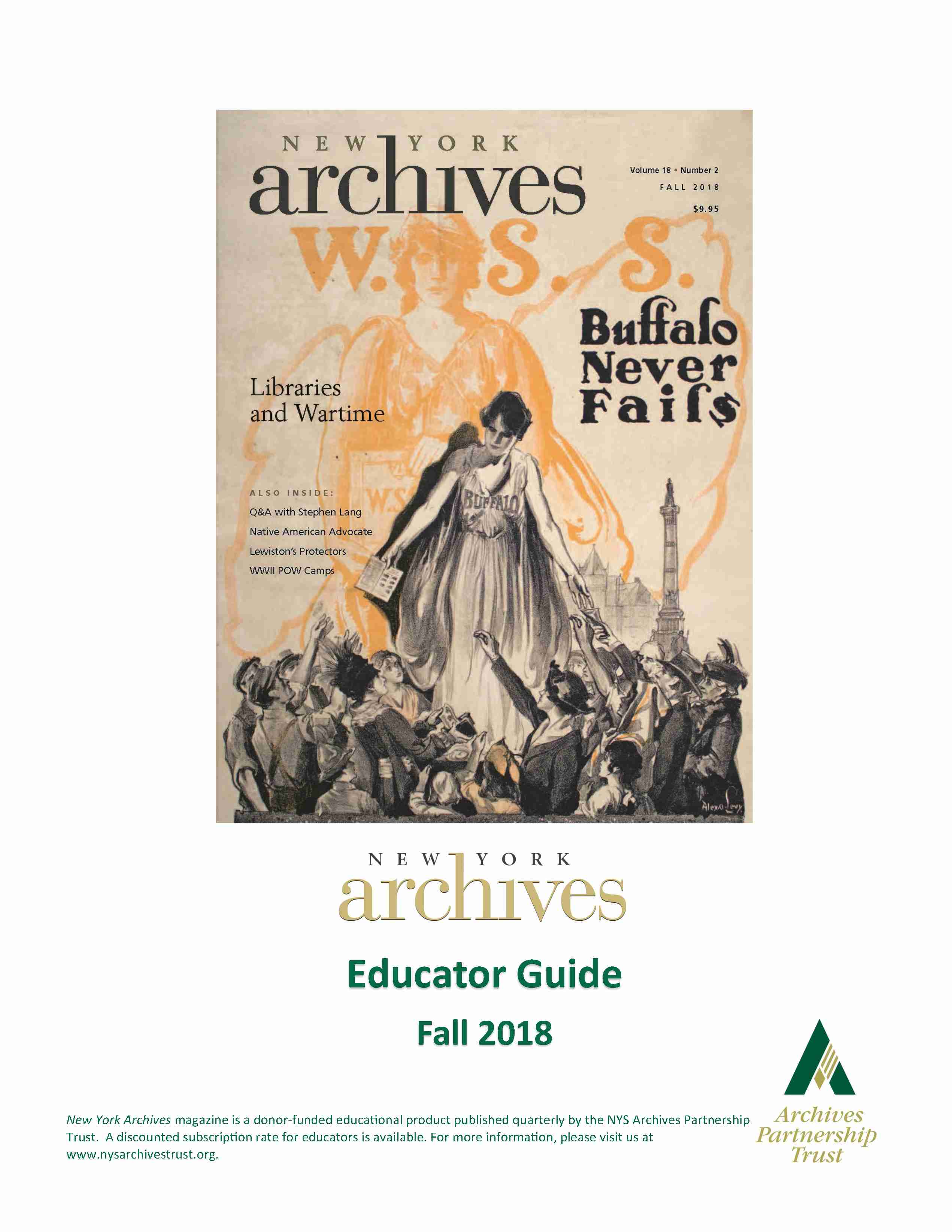 A Century of Saving Daylight

This November 4, as Americans prepare to set their clocks back, many will be thinking of how much more sleep they’ll be gaining. To the original Daylight Savings Time (DST) advocates in the United States, however, it was a patriotic endeavor as well as one that would increase economic and recreational efficiency. The first law mandating the observation of Daylight Saving Time was the Standard Time Act, passed in 1918.

The law drew clear support from New York, which formed a New York Daylight Saving Committee, chaired by Marcus M. Marks, who simultaneously served as both the head of the National Association of Daylight Saving and the borough president of Manhattan. In hearings before Congress, Marks touted the ability of daylight saving time to support President Woodrow Wilson’s call for individuals at the homefront to grow more food: “[T]here are a million people come into New York, Manhattan, every day and go back to their homes every night; they will get there one hour earlier and they will have one hour more of daylight for gardening.”

Marks also proclaimed that gas bills would go down, and workers would be at their job during more comfortable hours. President Wilson, a forceful advocate, noted that Germany had adopted daylight saving in 1916 as an emergency wartime measure, and most of Europe quickly followed suit. He viewed daylight saving as a way to modernize the country, and grew concerned that the United States was lagging behind.

Wilson charged supportive organizations to work with businesses that would see increased productivity if legislation for a national standardized daylight saving time was set. The partnerships produced posters advertising the legislation, most portraying it as a patriotic measure to support the “doughboys” overseas by increasing agricultural and economic production. These posters helped shift enough support for Congress to pass the Standard Time Act in March 1918.

Daylight saving advocates celebrated passage of the legislation in New York City with an open-air festival with songs, speeches, and motion pictures, culminating with Marks (as President Wilson’s representative) symbolically using new electrical technology to move the great illuminated clock on the Metropolitan building one hour ahead.

Despite the celebrations and Wilson’s continued support, daylight saving proved unpopular in practice, particularly for farmers who found it disruptive to already-established schedules. Congress refused to extend the emergency measure for a national standard after World War I ended; such a standard was not authorized again until the Uniform Time Act of 1966. However, this allowed for state and local control, and New York City was one of several cities that never stopped adhering to Daylight Saving Time after 1918.