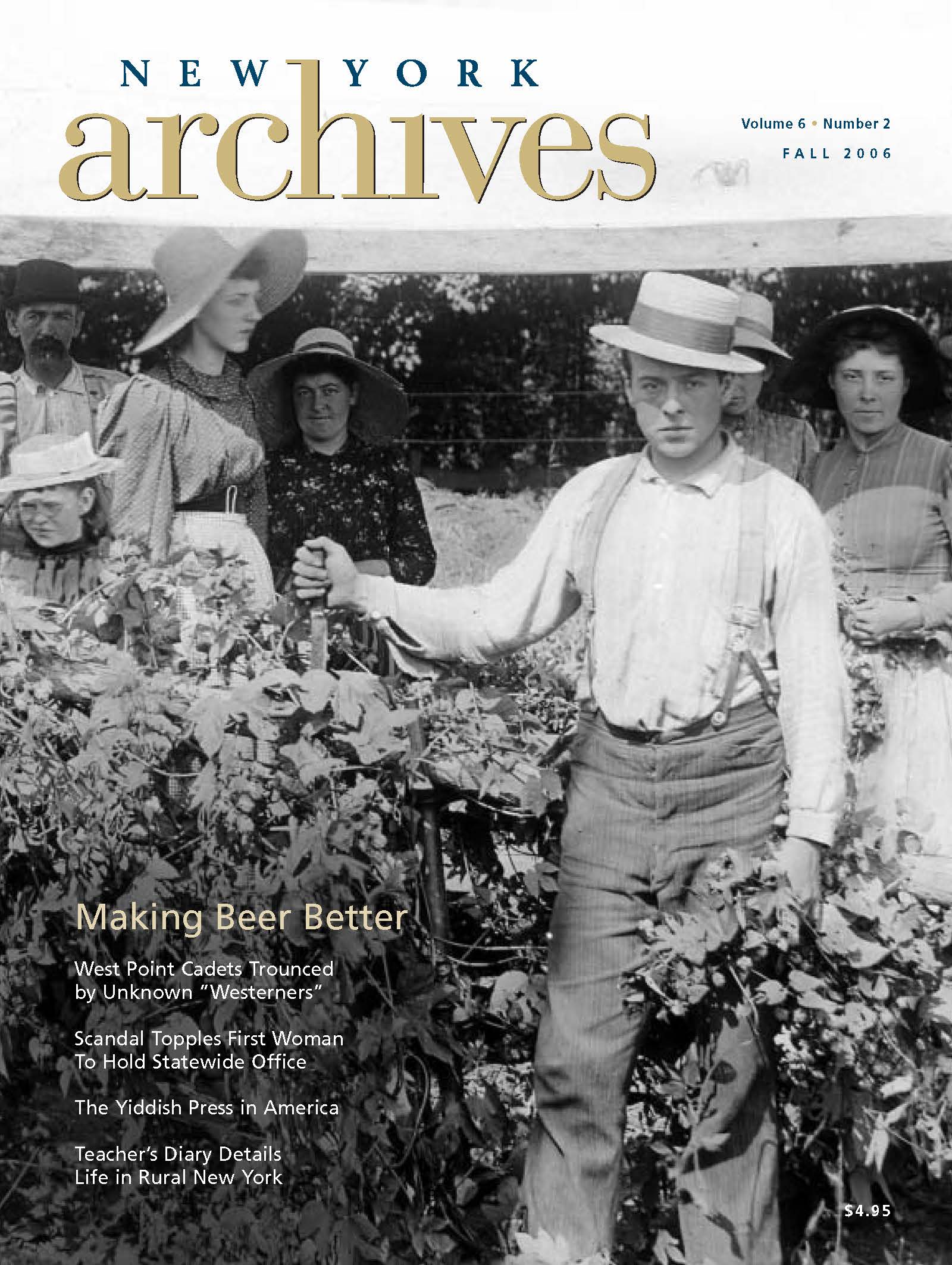 When Hops Were King
G. William Beardslee
Hops…as in beer, breweries, the late-nineteenth-century heyday of central New York’s cash crop, and unique storage houses, now in danger of being lost

Thunder on the Hudson
Charles F. Howlett
In 1913, on its home turf at West Point, Army faced down little-known Notre Dame in a football game for the books that starred a skinny end named Knute Rockne

A Self-Made Women
Mark Fleisher
Governor Al Smith said she looked like “a basket of peaches.” But Florence Knapp, New York’s first female secretary of state, proved a little more complicated than that.

Diary of a Small Town
Mary Robinson Sive
The “dailiness” of living in a small town, detailed in a Delaware County woman’s journal, also illuminates a time and a way of life long past

When Hops Were King

Hops…as in beer, breweries, the late-nineteenth-century heydey of central New York’s cash crop, and unique storage houses, now in danger of being lost

In the nineteenth century, hop houses were so common it was said that “every other farm and farmer had one.” So there is no small irony in the urgency to preserve central New York’s surviving hop houses. Alternately called hop kilns or hop barns, they were the specialized structures used to dry, bleach, cure, package, and store the hop flower, or cone, used in the brewing of beer. Hops add stabilizing and preservative qualities to beer: not only is beer improved by the hops’ distinctive aroma and bitterness, but hops allow beer to be stored and preserved for longer periods.

A further irony is that today it is the hop houses themselves that need preservation. Once numbering in the hundreds, only a few score remain today as relics of a once-dominant agricultural activity in central New York.

Constructed between the early 1800s and 1900 in New York’s “hop belt” (Otsego, Chenango, Madison, Oneida, Montgomery, and Schoharie Counties), the hop houses’ unique architectural styles remain distinctive despite the passage of time. During these decades, the traditional appearance of central New York’s family farms changed as hundreds of hop houses were built. The earliest designs were usually low barns with some ventilation. Later they evolved into narrower and taller structures, topped with a cupola directly above the drying kiln area. As farmers focused on the efficient cultivation and drying of hops, distinctive pyramid-shaped kilns were constructed. In time, multiple-pyramid hop house complexes were common.

Fruit of the Vine
The hop (Humulus lupulus), first grown by the Greeks and Romans, is a twining, climbing vine, closely related to hemp and marijuana, that grows prodigiously during the summer months. But hops have not always been part of the beer making recipe. Historically, beer was made from barley, water, and yeast, and flavored—perhaps to disguise its taste—with a variety of spices and herbs, including rosemary, thyme, spruce bark, sassafras, honey, bog myrtle, yarrow, ale cost, and many others. Herbs were chosen not only for their flavor, but also for their reputed medicinal properties. In this early form, beer was called “gruit.” Unless greater quantities of grain were used to increase the alcohol content and thereby reduce spoilage, however, gruit had a relatively short shelf life.

In the later Middle Ages, brewers (mostly monks) added hops to the beer-making formula. Hopped beer slowly gained popularity for its aroma and bitter taste––and for its ability to stabilize and preserve the wort/mash. Hops helped clarify the beer, provided a good head, and dramatically improved its keeping power. Thus beer no longer required a high alcohol content to prevent spoilage, which meant that the brewers needed less grain, which translated to higher profits.

Beer and hops were among the first products of New England. A journal kept by one of the Mayflower Pilgrims indicated that one of the reasons their voyage terminated in Massachusetts instead of Virginia was a shortage of beer. At that time, most hops were imported from England, where a significant hops industry had developed as early as the fourteenth century. The English conical-pyramidal hop-drying houses, made of stone and called “oasts,” are still commonly seen in southern England, particularly in the traditional hop-growing region of Sussex–Kent.

Cash Crop
In New England, the commercial growing of hops began in Massachusetts in the late 1700s. Until 1850, Vermont cultivated significant quantities, but it was the transplanted Yankees of central New York who perfected large-scale hop cultivation. In 1808, Madison County’s John Cooledge established a “hop yard,” but most farmers ignored the crop until Solomon Root sold two tons of hops for $1,000 in 1815. Within a decade, a hops industry developed. At first the harvests were modest, but after a series of English crop failures in the early 1820s the increased demand for hops, combined with the construction of the Great Western Turnpikes and the new Erie Canal (which allowed for cheaper east–west transportation), made hop cultivation explode. By 1840, forty-three New York State counties reported having at least one hop yard.

By mid-century, due to excellent yields and good market prices, central New York hop production assumed major proportions. By 1849, New York had attained national leadership in the production of hops, and by 1855 the region was raising millions of pounds annually. On the eve of the Civil War, most of the hop crop in the United States was raised in New York; over one-third of New York’s production came from Otsego County. By 1879, central New York’s hop fields covered over forty thousand acres and produced over twenty million pounds of hops. At its peak in the last quarter of the nineteenth century, the American brewing industry consumed more than thirty million pounds of dried hops each year––the majority grown domestically, and most of it in central New York.

Summer’s Work and Play
In late summer, the hop-picking season began. In an era in which women and children were traditionally protected, it was considered appropriate for young women and men to go hop-picking together. In the region’s hop yards, thousands of men, women, and children were hired for the various field jobs: pickers, box tenders, kiln workers. Although many pickers were local residents, many others were transported in from nearby urban centers, and as part of their wages they were provided room and board for the season. Women and young adults were assigned the “particular work” of picking the hop flowers/cones from the vines, while men performed the heavier tasks of pole lifting, box tending, and carting.

Hop-picking was considered pleasant work and was often described as a “good time.” For a few weeks each summer, mostly young men and women worked closely together in the fresh air, ate good country food, and attended nightly dinners and “hops"—informal social occasions where participants would dance to music. Correspondence from the time indicates that many hop pickers thought an important part of their experience was the chance of meeting “someone special” at a “hop.”

Equally as important as the cultivation and picking of hops was their drying and storage. When picked from the vine in late summer, the hop’s flower-like petals contain lupulin, which resembles large yellow pollen grains. Sticky to the touch, lupulin is a stiff oily resin whose complicated chemistry is found in no other plant. Its volatile oils flavor the beer, and its resins contain alpha acids that confer bitterness and natural preservatives.

After picking, the hops were packed, taken to the hop house, and placed on a cloth-covered, slatted drying floor directly above the kiln room’s large furnace. Over a period of about eighteen hours, the kiln master—usually the owner of the hop yard—circulated a steady current of hot air (160° F) through the hops; this lowered their moisture content to a straw-like twelve percent. At a critical moment in the process, sulfur was ignited, which bleached the hops to the desired color. Once dried and bleached, the hops were moved to the adjacent cooling room where, after a few hours of “sweating,” they were dropped down a chute into the pressing room’s hopsacking-lined press, compacted into bales, and stored. Like many agricultural commodities, hops were bought and sold by middlemen and brokers as futures or as a spot commodity. The best prices usually occurred around Christmas.

But by 1900, central New York’s golden age of hops was over. A few hardy growers survived into the middle of the twentieth century, but a combination of events caused the industry’s demise: competition from more efficient hop producers in Oregon, California, and Washington; the appearance of crop-specific insects and a “blue mold” that attacked and destroyed the hop flower; the emergence of the more reliable dairy industry; and the growing intolerance of many Americans toward alcohol. Prohibition in the 1920s and 30s resulted in the final collapse of what had been central New York’s most successful crop.

Preserving History
Today, aside from a few stalwart farmers trying to reintroduce the crop and a demonstration plot at the Farmer’s Museum in Cooperstown, hop growing is nearly non-existent in central New York. What remain are the few extant hop houses, although each year a few more disappear. Many are in a state of serious neglect and in danger of imminent collapse. The need to preserve these remnants of the area’s agricultural history is obvious, and some individuals, groups, and institutions have risen to the challenge.

For example, in Otsego County, the Farmer’s Museum in Cooperstown has restored an 1840 hop barn once owned by Samuel Pierce Pope. In the Town of Pittsfield, not far from New Berlin, a classic pyramid-shaped hop barn has been privately restored to its 1860 appearance. Madison County’s local historians, with the assistance of the Preservation League of New York State, have succeeded in adding seven local hop houses to the league’s yearly list of threatened historic resources as “Seven To Save in 2006.” But the league’s president, Jay DiLorenzo, summarized the need for immediate action: “The…League calls on local and state organizations and agencies to work together… to identify, document, stabilize and preserve our remaining hop kilns…The work of the Madison County Historical Society and the New York State Legislature provides important resources for encouraging an appreciation of hop resources. But more must be done to ensure that the tangible legacy of New York’s proud agricultural history can endure.”