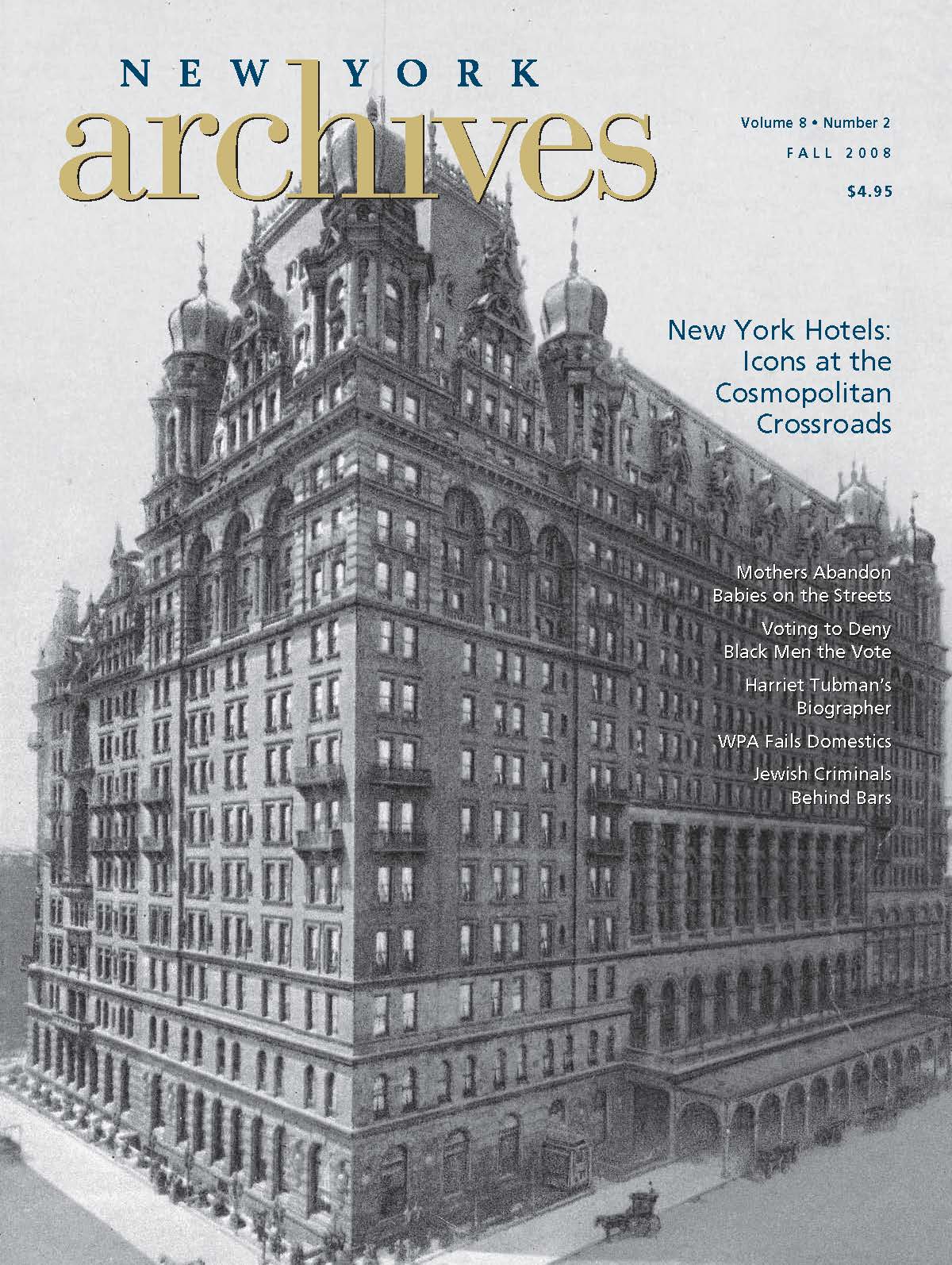 Palaces for the Public
A.K. Sandoval-Strausz
From the eighteenth century to the present, the importance of New York’s hotels has transcended their local role and set the pace for commercial hospitality nationwide.

“Poor Little Innocents”
Julie Miller
Why would a woman abandon her baby on the street? In nineteenth-century American and European cities, the answer was usually one word: poverty.

Jim Crow in the Empire State
Michael Lipton
The fight for black voting rights in antebellum New York offers an opportunity to reassess our preconceptions of the larger currents of history.

The Saga Writer
Preston E. Pierce
A white woman from the Finger Lakes region, Sarah Hopkins Bradford, wrote the first biography of African American heroine Harriet Tubman. But who was the woman behind the pen?

A New Deal Gone Bad
Vanessa May
A much-heralded WPA program intended to improve wages and conditions for New York City’s female domestic workers ended up catering to the needs of employers instead.

Counting the Black Sheep
Ron Arons
After the genealogical discovery of an errant ancestor, the author found that Sing Sing Prison in Ossining served as home to thousands of Jewish inmates—including his relative.

Annie Oakley in Court
Michelle Henry
After all her libel cases were settled, Oakey had spent more of her own money on attorney and court fees than she was awarded in damages.

The name Annie Oakley is synonymous with sharpshooting, marksmanship, and Buffalo Bill’s Wild West Show. At only five feet tall, she was nicknamed “Little Sure Shot” by Chief Sitting Bull. Oakley (1860–1926) was America’s first female superstar; she became an international sensation after a European tour that featured her shooting the ashes from a cigarette held by Wilhelm, the Crown Prince of Germany.

Oakley (born Phoebe Ann Mosey in Woodland, now Willowdell, Ohio) overcame substantial obstacles throughout her life with sheer determination and strength of character. She grew up in poverty, never attended school, and suffered abuse from a family to which she was indentured as a child. Later she broke barriers for women by excelling in a field dominated by men and proved that a woman could work in the entertainment industry without compromising her conservative values. Oakley never wore the revealing costumes associated with vaudeville performers of the day. She gave a substantial portion of her earnings to orphans, widows, and needy young women, and she supported her mother and siblings throughout their lives.

But even Oakley, with her flawless character and private personal lifestyle, was not immune from the same yellow journalism that plagues today’s superstars. By the turn of the twentieth century, sensationalist cocaine abuse stories became popular fare in newspapers. On August 11, 1903, William Randolph Hearst released a story that Oakley was “washed up” and had been arrested in Chicago for robbing an “old colored man” to support her cocaine habit. Forty-three years old at the time, Oakley was actually living a quiet life of semiretirement in New Jersey. A telegraphic dispatch from the Publisher’s Press sent the story across the country, and it was picked up by many newspapers, including the Dunkirk Herald in Dunkirk, Chautauqua County, New York. However, the next day the woman arrested in Chicago admitted she had falsely given her name as Annie Oakley, and a story retraction was released over the wire. The Dunkirk Herald also printed the retraction.

Oakley was devastated by the story. She did not believe that a retraction was sufficient, and proceeded to initiate libel suits against every newspaper that had printed the story. For the next six years, she and her husband, Frank Butler, did nothing but pursue damages. In the PBS American Experience series “Annie Oakley,” she was quoted as saying, “The terrible piece…nearly killed me. The only thing that kept me alive was the desire to purge my character.”

In September 1906, Oakley’s case against Daniel Toomey, owner of the Dunkirk Herald, was heard at the Chautauqua County Courthouse in Mayville. Oakley and her husband came to Mayville for the trial, in which she was seeking $25,000 in damages. A local newspaper described her as “a small woman, prematurely gray but vivacious…who bore the appearance of a kindly school teacher.” She testified that she had been at home in Nutley, New Jersey with her husband in August 1903, and that in twenty-one years as a performer she had only missed five performances. She stated that even if she had known that a retraction had been printed, it would not have greatly influenced her.

The defense attorney, George E. Towne, argued that the retraction made good the harm that the libelous article had caused. He also argued that publication of the article in a newspaper so remote from Oakley’s home did not injure her financially to any great extent. He admitted that the article was libelous, but claimed the amount being sought in damages was excessive.

Assemblyman Arthur C. Wade, attorney for the plaintiff, described Oakley as “in every way a woman of culture, refinement, and virtue.” The Jamestown Morning Post wrote that Wade’s summation for the prosecution was a brilliant effort: “During the hour that he held the floor…he indulged in a stirring philippic [tirade] on the injustices of the press and the newspaper men, whom he described as conscienceless. He looked confident when he sat down, and leaning over to Oakley said, ‘We will get a verdict.’”

Five hours after the jury retired to deliberate, they filed back into the courtroom. The jury found for the plaintiff, and agreed upon a verdict of $500. Several of the jurors had at first held out for a verdict of $5,000, they said, but compromised on $500.

After all of her libel cases were settled, Oakley had spent more of her own money on attorney and court fees than she was awarded in damages. One award was for only six cents. But she had not initiated the actions to make money, rather to restore her good reputation.

Filed with the Chautauqua County Clerk are the original court records relating to the case, including the Final Judgment ($500) and Costs of Plaintiff ($130.57).