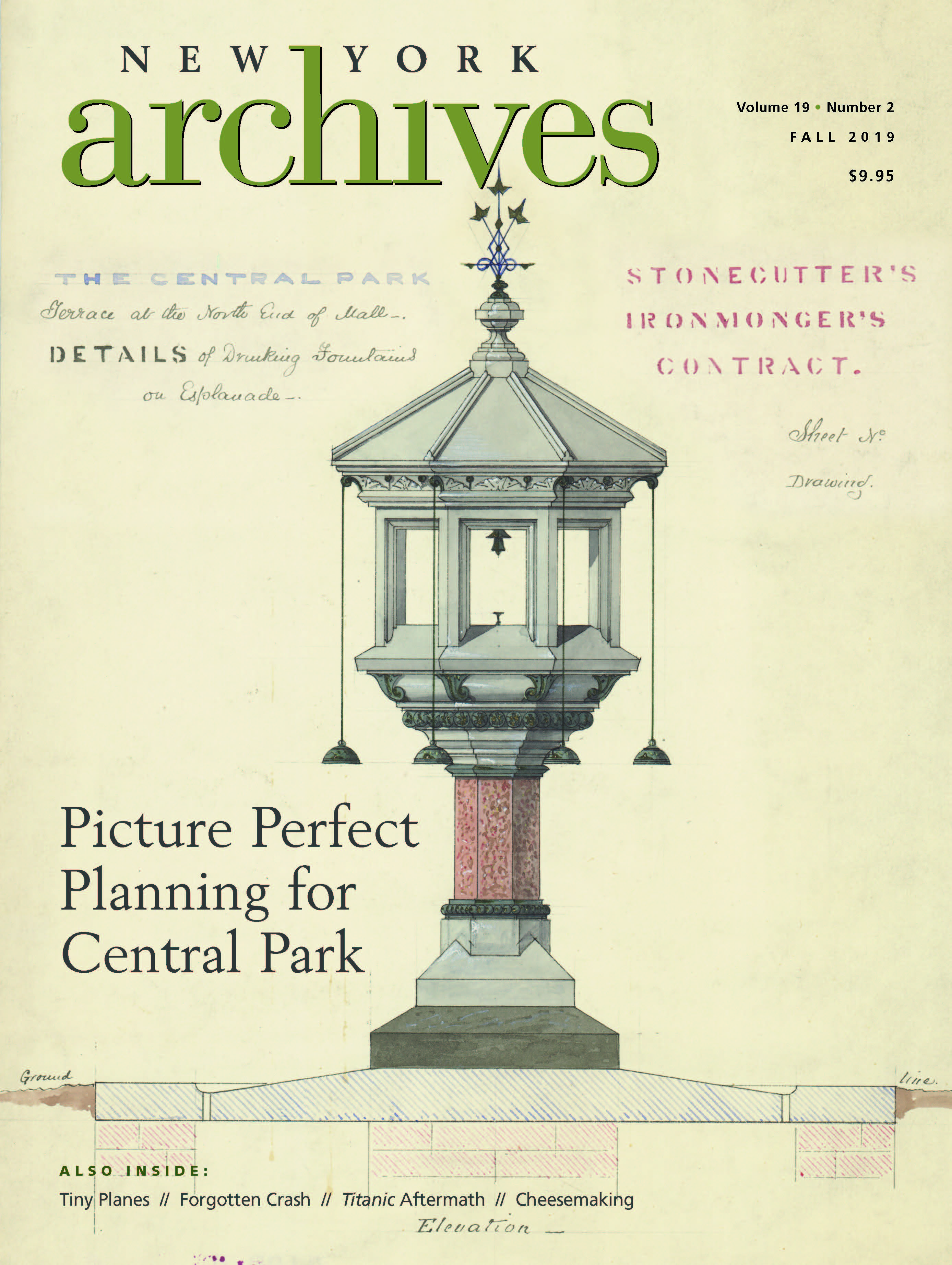 Central Park: A Pastoral Vision
Cynthia S. Brenwall
The plans for New York City’s most famous park are evidence that they were important tools, down to the coffee stains, scribbles, and notations.

Sisters of Charity
Eric C. Cimino
Titanic survivors were cared for by the nuns at St. Vincent’s Hospital in New York City.

Jesse Williams: The Big Cheese
Patrick Reynolds
A farmer wanting to help his son led to big changes in the cheese factory system and New York became an industry leader.

Can All You Can
Jasmine Bumpers
The Broome County Canning Caravan sought to educate people on what they could do with surplus crops during WWII. Operated by home economic experts, usually women, the caravan came fully equipped to provide demonstrations on how to best utilize and preserve the products of "victory gardens." 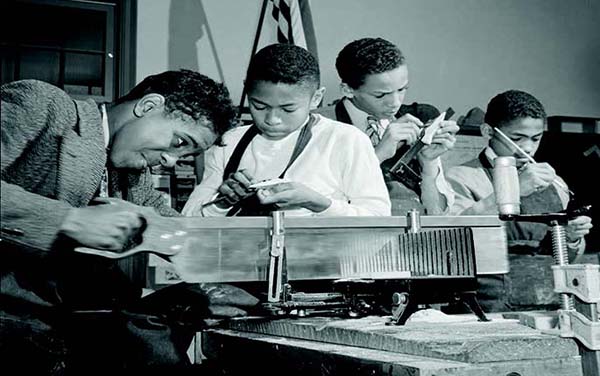 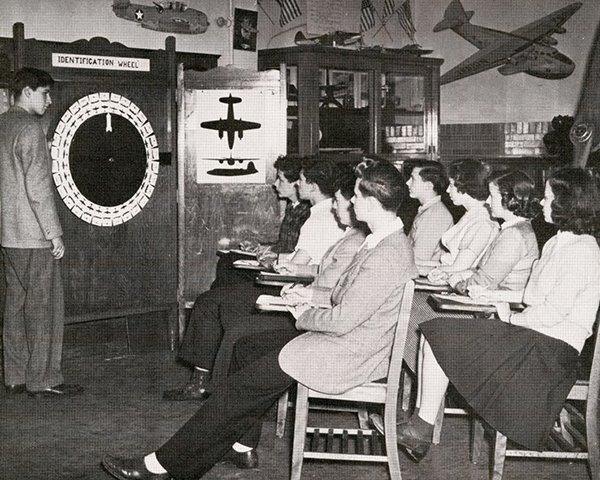 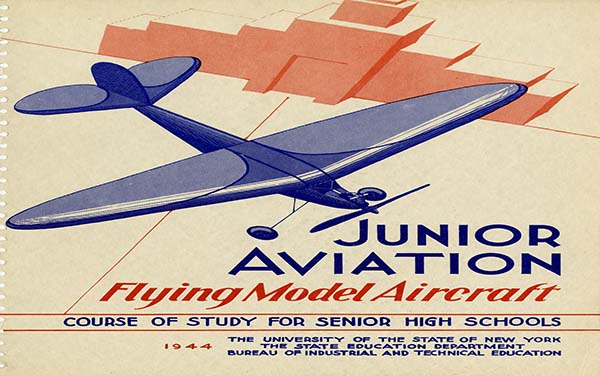 World War II fighter pilots needed to know the difference between friendly and hostile planes in the air in split seconds. After the attack on Pearl Harbor, the US Navy and the US Office of Education developed a way of using model aircraft to train pilots, gunners, and civilian defense personnel to identify unknown aircraft quickly.

In February 1942, during the early days of World War II, there was an urgent need for 500,000 aircraft recognition models, also called “spotter” models. Viewing small-scale models of both Allied and Axis aircraft in 1/72 scale from different perspectives and distances was believed to be an effective way to learn how to quickly identify any approaching planes that might be a threat. Models were scaled so that, at a distance of thirty-five feet, they would appear the same size as the actual aircraft would at a distance of one half mile. This was valuable for range finding when radar was not available. Both military and civilian personnel were drilled using split second exposure to both the models and flash cards to train them to rapidly recognize aircraft nationality by their distinguishing characteristics. These were succinctly defined as: number of engines, wing shape, tail design, and fuselage profile. It was a vital skill in a new type of war in which airpower would be paramount. The armed services had to turn to an unlikely source to produce thousands of these model planes on an emergency basis. Thousands of the nation’s students would make the aircraft recognition models individually, out of wood. Building model airplanes, a common childhood pastime, had suddenly assumed an importance that few people could have imagined just a few months earlier. But how did this hobby become regarded as an important resource in wartime?

High Times
The decade prior to World War II was something of a golden age for aviation and for the model airplane hobby.This time period saw recordbreaking flights, charismatic pilots, revolutionary aircraft designs, a national air race, and innovations in the design of homebuilt airplanes, some powered with automobile engines. Many aviation magazines were being published for youth, featuring model building plans, articles, photos, and artwork. And for a youngster wanting to experience the excitement of flight while still being on the ground, a wide variety of easy to build model kits were available.

The durable, nonflying, solid wood models that so many young boys and girls had constructed and played with for years was exactly what was needed to train wartime aviators and ground observers. To make the planes in quantity, only one approach seemed feasible at the time: merge industrial wood-working practices and years of model building experience in the classroom. Combining the diligence and determination of both teachers and students, high school shop classes were the answer. Six thousand school districts across the country were chosen to participate in the project and were directed by state education departments.

Unfilled Quotas
In 1942, the Navy Department set the quota for the first year at 60,000 models. Meeting it was going to be a challenge. Some schools had to abandon their usual curricula to comply. After receiving the official set of templates, specifications, and instructions for the dozens of different airplane types, it was left to the shop teachers to assemble the tools and acquire the wood and other materials that were needed. It was also the shop teachers who informed their students that they were now an important part of the war effort. Many students were already advanced builders, but others were less skilled. This disparity inevitably created problems. Not every model by every student met the high standard of quality and accuracy that was required by the Navy. Despite the initial enthusiasm, pupil interest in the project reportedly lagged toward the end of 1942, leading to unfilled quotas. Clearly, steps needed to be taken to level the playing field as well as speed up construction. There was also a growing concern that excessive time was being spent building models at the expense of other aspects of the students’ education.

Jigs
In March 1943, the New York State Education Department published “A Production Plan for the Scale Model Aircraft Project.” The 62-page booklet addressed the problems encountered in the first year of the project. The most important issue was the time-consuming nature of precision model building. Some of the more complicated types took fifty hours to build. The primary emphasis was now on the use of newly developed devices, or jigs, designed to guide tools to improve accuracy. The booklet described in detail their use to produce each component of an aircraft model: wings, fuselage, horizontal and vertical stabilizers, engine nacelles, etc.

A part produced in a jig would be identical to every other part made in that jig, be it two or 2,000. This solved both the accuracy and consistency problems. Jigs were easy to use even by relatively unskilled students. Jigs were also quick, creating a part that required little hand finishing. According to the cover of the booklet, jigs were “fun.” All the required types were illustrated in the “Production Plan” booklet and shop teachers were expected to make and use them as designed, but improvements were allowed and even encouraged. All this was being accomplished using common shop hand tools, a table saw, a band saw, and a drill press. New York’s plan turned out to be an insightful and practical solution to several of the problems encountered when implementing the Model Airplane Project.

Future Careers
Roy G. Fales, State Director of the Model Airplane Project, noted there were additional
benefits for participants in the Production Plan. He wrote: “It should be possible to make them so rapidly and so easily that each pupil will be able to own as many of the various models as he wishes. The very speed with which the planes can be made... will make this work attractive and interesting to the pupils.” Another plus was that doing this “type of work” lent itself to “group or class cooperation.” Also, doing a type of assembly line work in class could be considered both an initiation and an invitation to a future job in one of America’s defense industries, all considered positive for the war effort.

By 1943, the Navy’s list of aircraft types that needed to be built had expanded to eighty models representing six countries: America, Britain, Russia, Germany, Italy, and Japan, ranging from the British Bristol Blenheim to the Russian Yak-4. Fortunately, reaching the goal was no longer as difficult as it had been the previous year, due to the improvements to the program. New York’s quota was an attainable 40,000 planes of the various types. About this time, a method of casting virtually unlimited numbers of ID models from molds was developed using an early type of plastic, making the handmade types obsolescent. While these served their intended purpose until the war’s end, the material they were made of tended to decompose over time. Very few have survived in recognizable form.

Today, examples of any type of World War II aircraft recognition models are scarce, present mostly in museum collections. After the war, thousands of surplus models ended up in crowded toy chests, with predictable results. During the post-war era, recognition models were replaced by commercially made injection molded plastic versions, designed not for war but to populate collections, dresser-top airports, and bookshelf landing fields. These airplane models had the outward form of American B-17s, P51s, German BF 109s, and Japanese Zeroes, but lacked the compelling aura of history that surrounded wartime’s handmade wooden Air Force. But history reminds us that The Model Airplane Project and the contribution of New York’s high school students helped obtain the eventual outcome: peace.

The New York State Archives maintains a collection of fifty-eight instruction manuals published during WWII by the State Education Department for the Vocational Education Program for National Defense Industries. These manuals were distributed to vocational and high schools to assist in the technical training of students. A pamphlet titled “Junior Aviation in New York” is a pictorial essay of activities relating to aviation in high schools during World War II, including model making.

The Archives Division of the National Air and Space Museum in Chantilly, Virginia has copies of the original plans for the recognition models. Go to https://airandspace.si.edu/collection-objects/unitedstates-navy-world-war-ii-aircraft-recognition-modelplans-1942 to order one and try making your own!

The Empire State Aerosciences Museum at the Schenectady County Airport in Glenville, New York, has an extensive array of indoor and outdoor exhibits tracing the history of aviation from its beginnings to the current day, with an emphasis on New York's significant participation. In its World War II section there is a full-scale reconstruction of an Aircraft Warning Service post complete with period correct artifacts (including a couple of ID models) on display.