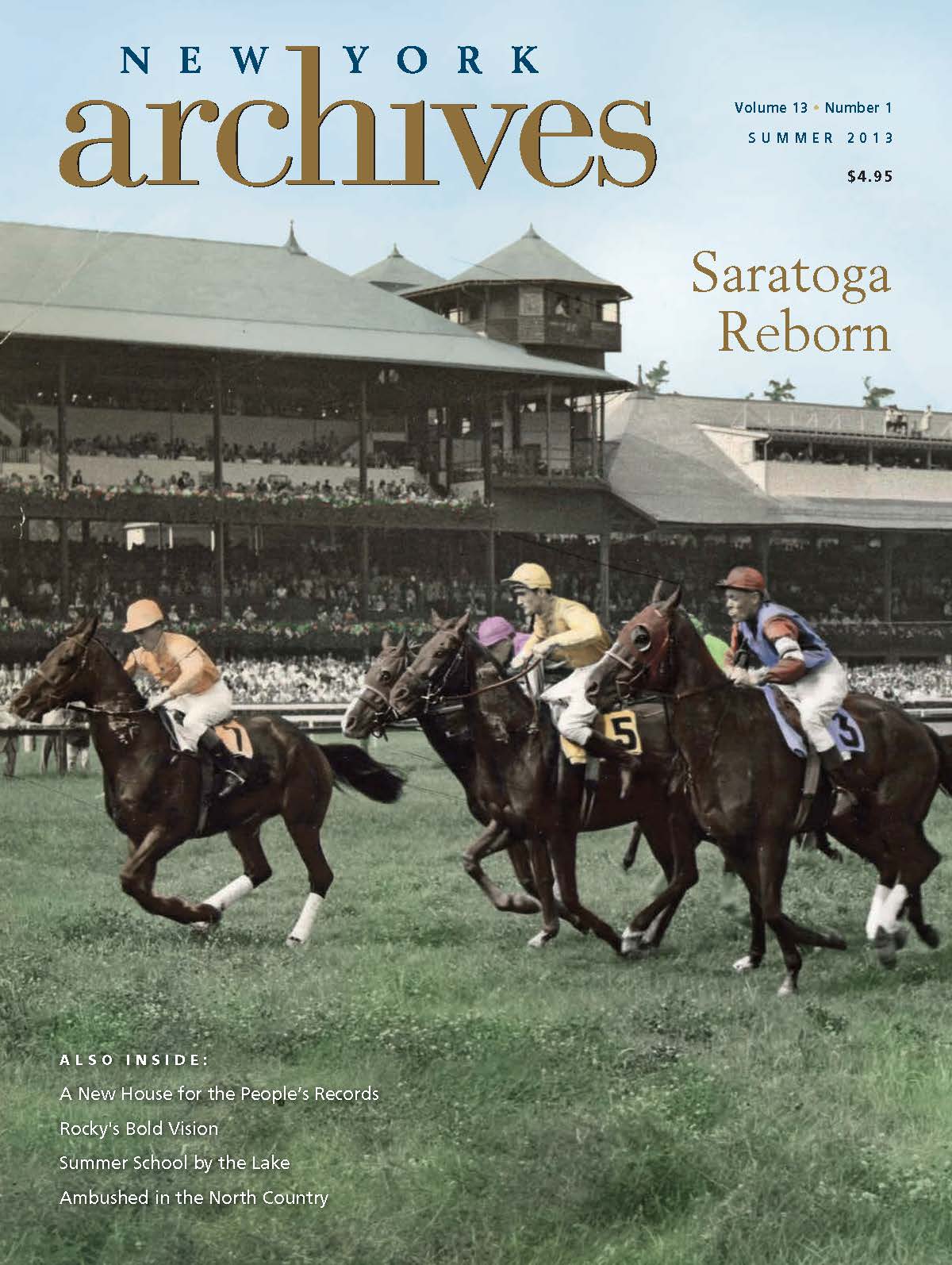 The Savior of Saratoga
Isabelle Taylor and Paul Roberts
At the turn of the twentieth century, William Whitney modernized Saratoga’s historic Race Course––and gave its splendor back

How Native Americans Beat the British Navy
Laurence M. Hauptman
Was an Oneida oral history from the War of 1812 just a good story, or was it fact? Only research in the archives would tell.

In southwestern New York State at a Methodist camp meeting ground, two men began the adult education movement that enriched and benefited millions of Americans well into the twentieth––and twenty-first––centuries.

Sunday schools of the nineteenth century taught more than religion; for many American children, these “Sabbath schools” provided their only general education in reading, writing, arithmetic, and social manners. Although Sunday schools declined in the years following the Civil War, starting in 1865 the Methodist Church began to restructure the curriculum, and Reverend John Heyl Vincent, corresponding secretary for the Sunday School Union and editor of several related journals, planned to hold two-week normal school sessions to teach this new curriculum.

In 1872, Reverend Vincent approached Lewis Miller, superintendent of Sunday schools in Akron, Ohio, for help in organizing these sessions. Miller was a successful industrialist and inventor of the Buckeye reaper (a grain-harvesting farm machine). The two men had much in common: neither had attended a university or college, but both shared a love of education and appreciated its importance for developing Christian character. Their partnership was the beginning of the Chautauqua community.

Taking It to the Woods
Rather than hold the normal school sessions in Akron, Miller proposed that they “take it to the woods” by using as a summer venue the Methodist campsite at Fair Point on Chautauqua Lake in the Southern Tier of New York State. Chautauqua Lake was rapidly becoming a popular tourist destination after the introduction of railroads, and both Vincent and Miller realized that this location would allow them to bring in audiences and speakers from across the country to make the “New York Chautauqua Assembly” a national event.

Miller was elected president of the Assembly’s organizing committee and took on the task of preparing Chautauqua’s grounds, which were typical of a camp meeting. There were about 125 cottages, mostly rooming houses, encircling an outdoor auditorium composed of benches between trees, with a speaker’s stand in the center. Beyond the cottages were lots for tents, with a gated fence enclosing the grounds. A primitive pier for steamboats provided the primary means of access. Much work needed to be done, how-
ever, to upgrade the facilities for the hoped-for crowds: besides adding accommodations, stores and booths were engaged to sell books and food and to rent all that a visitor might need, from tents and bedding to furniture and lamps. A large tent was also erected for dining, a museum was built, and a scale-model was made of the Holy Lands (which still exists today).

Vincent was put in charge of the Assembly’s program. He invited the best-known religious speakers of the day and used his connections with the Christian press and Sunday school journals to advertise the Assembly throughout America. Well-known Christian journalist T. De Witt Talmage heartily recommended attendance via a Biblical analogy:

Reverend Doctor J.H. Vincent, the silver-tongued trumpet of Sabbath-Schoolism, is marshalling a meeting for the banks of the Chautauqua Lake which will probably be the grandest religious picnic ever held since the five thousand sat down on the grass and had a surplus of provisions to take home to those who were too stupid to go.

Vincent and Miller’s ambitious enterprise brought together three American institutions: the camp meeting (a religious gathering held at a campground), the lyceum (a public educational meeting space), and the Sunday school. Each of these was in decline, but Miller and Vincent used the remaining appeal of each to address the deficiencies of the other two. From the camp meeting, they took the concept of welcoming back a community each year in order to allow people to step away from their regular routines and reacquaint themselves with one another and with their faith. From the lyceum, they took the idea of lifelong learning and the use of leisure for self-improvement. And from the Sunday school, they took their mission of spreading enlightenment and faith so that people could become better-educated Christians.

Daily Life at Chautauqua
On the evening of August 4, 1874, the New York Chautauqua Assembly opened. A crowd of 2,000 to 3,000 gathered in the outdoor auditorium, renamed Miller Park. After a brief ceremony and concert by the lake, a bell was rung and people headed off to bed. Reverend R.M. Warren, head of the Department of Good Order, explained:

Believing with Solomon that there is a time for everything…the time to sleep…is at 10 o’clock PM and the time to refrain…is at 6 o’clock AM…your sleep must be quiet…Snoring is held by the Fair Point authority to be a vulgar amusement, with demoralizing tendencies.

In the morning, after just enough time to wash, dress, and eat breakfast, attendees gathered in the outdoor auditorium for a family prayer service, after which the Assembly broke into various classes. Around 10:30 or 11 a.m., everyone reconvened for a lecture or sermon, followed by a two-hour break for lunch and general recreation— croquet, rowing or sailing, long walks, special excursions, or perhaps a visit to the museum to view the three-thousand-year-old mummy on display, or to listen to Mr. Van Lennep speak at Palestine Park dressed as a Syrian shepherd or a Muslim warrior. One observer wrote: “The Lake was alive this afternoon after lecture hours with scores of sail and row-boats, full of boating parties full of delight; every croquet ground was the scene of eager contestants…each the center of applauding spectators.” There was also time, as the newspapers reported, for the traditional camp meeting pastime of flirting (Chautauqua provided ample opportunities for young people to meet acceptable spouses.) Classes and lectures resumed in the afternoon. After supper, the Assembly gathered to hear one or more speakers, view a show of lantern slides (transparent photographs projected onto a surface, which allowed viewing by a large audience), or listen to Professor William Henry Perrine give a tour of the Holy Lands as he unrolled his enormous canvas panorama. Before the bedtime bell rang at 10, the crowd would walk down to the lake shore to see fireworks and listen to brass bands and singers serenade them from rafts. British Ambassador Viscount James Bryce later wrote, “I do not think any country in the world but America could produce such gatherings.”

At Chautauqua, time was not to be wasted. In the early Assemblies, one was not required to take exams or classes, but one had to do—something. The Assembly’s governing committee stated: “Lectures will be provided for those who don’t care to attend the institute sessions proper, but all must attend something. Persons not wishing to be enrolled as regular normal pupils will be expected to attend one or more lectures each day. There will be no recreations during lecture and institute hours.” The Assembly Police were on hand to enforce this rule, and did so, even to the point of escorting idlers to lectures and confirming that they remained to hear them before being escorted off the grounds.

A Movement Is Born
The press declared the “Mother Chautauqua,” as it was dubbed, a success. It was estimated that 20,000 or more had attended the Assembly during the inaugural two-week session, and plans were made to reconvene the following year (as they would be made every year up to the present). M.A. Chase wrote in the Christian Standard:

Few would have imagined that such a feast of good things, intellectual and spiritual, could have been crowded into two weeks. Two and sometimes three of the best pulpit orators in the land spoke the same day, and all the intermediate hours were filled with classes for instruction and discussion.

President James Garfield said, “It has been the struggle of the world to get more leisure, but it was left for Chautauqua to show how to use it.”

In 1878, the Chautauqua Literary and Scientific Circle was created as a correspondence reading course designed to give those who could not attend college the opportunity to have an equivalent education. Chautauqua’s mix of education, edification, and entertainment would be copied by the many “daughter” Chautauquas that followed—at least 255 in North America and a few overseas at one time or another, most of them created between the late 1880s and World War I. The agents who provided the speakers and entertainers coined the term “Chautauqua Talent,” which referred to entertainment that was intended to both educate and edify: to be both good for you and fun. In 1904, these agents began putting circuit or traveling Chautauquas on the road, reaching millions in both the United States and Canada.

Eventually the movement split over social, political, and religious issues, and only a few venues besides the original Chautauqua survived the Depression. But the movement left an indelible mark on modern American culture. As Edward Everett Hale said, “If you have not spent a week at Chautauqua, you do not know your own country.”

Adding Back What’s Missing
At Chautauqua today, the day still begins with a worship service, for those who wish to attend (although it is ecumenical and presided over by ministers of various churches), followed by classes and a community lecture in the late morning, a break, and then afternoon lectures, classes, and other activities. After supper, people gather once more for evening entertainment. However, recreational activities are available all day, and people are free to do nothing at all if they wish—no Assembly Police for the idle. Thus many people seek to recover the original Chautauqua concept: not to return to the past, but to recover from the past what is missing today. To that end, Chautauqua can offer back to America three important “missing pieces” of daily life. The first is time: for rest, for the Sabbath if observed, not just to stop working or go to church but special time set aside to appreciate the completion of work. The second is a place: a common venue for learning, since we have so many modern choices that we tend to learn in isolation, seldom learning or experiencing in a group or with others. The third is restoration of a community that supports our search for an understanding of ourselves and our world—precisely what Teddy Roosevelt described the first Chautauqua to be: “A gathering that is typically American in that it is typical of America at its best.”

Primary sources about the first Chautauqua Assembly in 1874 are scarce. Online newspaper accounts of the time pro- vide the most information, particularly the Chautauqua Assembly Herald, the Assembly’s daily newspaper. Although it was started in 1876, it printed several recollections of the 1874 summer over the years that followed. I’ve also quoted from several book-length accounts of Chautauqua’s various assemblies and from newspaper accounts.

Reverend John Heyl Vincent preserved a large number of additional newspaper articles about Chautauqua; these, as well as a collection of yearly Assembly programs and the Miller Family Papers, a collection of reference materials, are kept at the Oliver Archives Center on the grounds of the Chautauqua Institution in southwestern New York. The larger John Heyl Vincent Papers are at the Bridwell Library of the Perkins School of Theology at Southern Methodist University in Dallas, Texas.

To learn more about Chautauqua or to arrange a visit, go to www.ciweb.org.