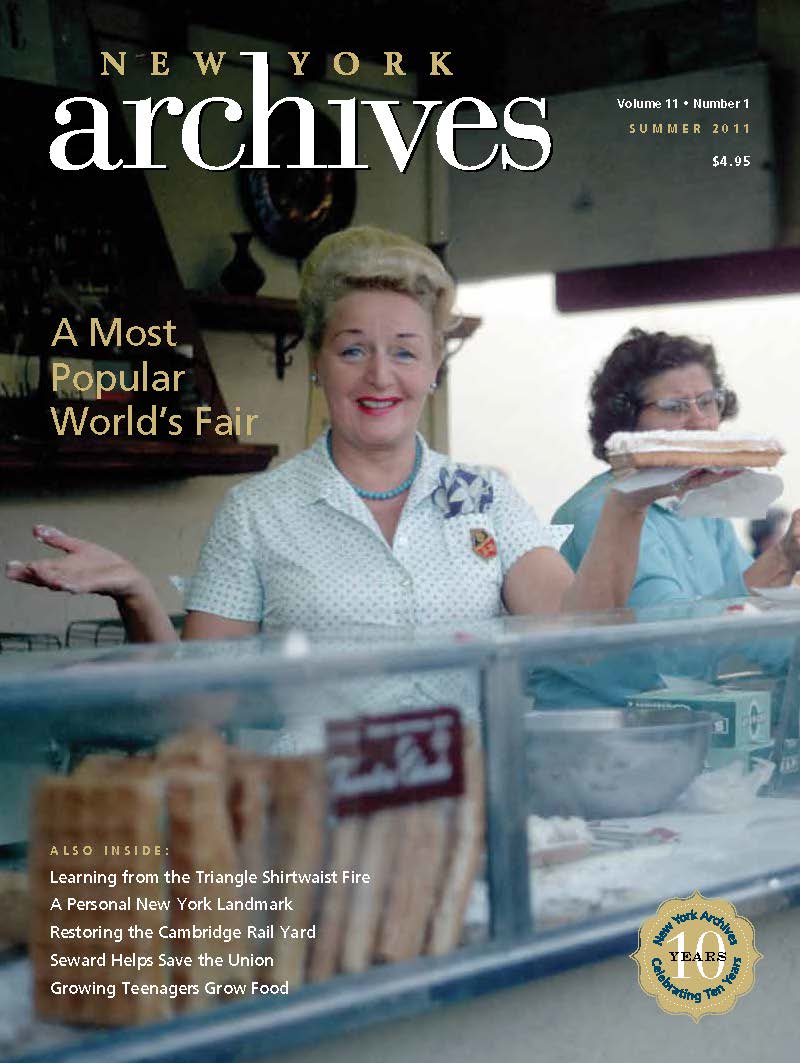 The End of America’s Innocence
Lawrence R. Samuel
52 million people came to the last great world’s fair in 1964 and 1965.

The Tragedy That Changed New York
Matthew L. Lifflander
An unusual alliance generated reform after the Triangle Shirtwaist fire in 1911.

Mapping the Past
Dede Nash
Sanborn maps were valuable templates for restoration of an upstate community’s old rail yard.

Building the New York Public Library
Gail Mahoney
Sometimes even the history of a New York landmark can be personal.

The End of America’s Innocence

Next time you’re in New York City, take a walk in the park—not Central Park,
but one that’s half again as big and is even more of a central park, located in the geographic and population bull’s eye of the city. It’s Flushing Meadows Corona Park in Queens, where, before soccer players, picnickers, and the best tennis players on the planet took it over, the last great world’s fair took place, and where, in two seasons between April and October 1964 and 1965, some 52 million people from the four corners of the earth gathered. The park is an enduring legacy of the Fair, transformed from the dismal “valley of ashes” that F. Scott Fitzgerald described in The Great Gatsby into a beautiful place that is the pride of the borough.

In between seeing color television for the first time at the RCA Pavilion and taking a ride in a brand-new car from Ford called the Mustang, you could stop by Bell Telephone’s pavilion to try the Picturephone, which lets you see (and be seen by) the person you’re speaking to. Your next stop might be the IBM Pavilion to inspect a new business machine called the computer (which has caused a huge fuss), followed by a visit to the General Electric pavilion to watch a real demonstration of thermonuclear fusion, in which a million amperes of “free energy” are released. Then, after strolling through the Space Park to check out a few rocket ships that have actually been in orbit—quite a thrill in these heady days of the race to the moon—you might go back in time to see a few of the Dead Sea Scrolls, followed by Michelangelo’s Pieta, especially since this is the first time the masterpiece has left the Vatican since it was sculpted 465 years ago. Then, just for fun, you might swing over to Pepsi’s pavilion to climb aboard a new ride called “It’s a Small World,” built by Walt Disney, and then over to the Illinois Pavilion to see another Disney creation, an eerily lifelike (or just plain eerie) robotic Abraham Lincoln that looks, speaks, gestures, and even smiles like the dead president. Finally, for sustenance, you could head over to the Chun King Inn for its seven-course dinner (which, now that you’re nearly flat broke, is thankfully just 99 cents), and, on the way out, sample one of those Bel-Gem waffles that everybody says are the best darn things at the Fair.

The Ugly Duckling of Global Expositions
I was lucky enough to have had such a day at Flushing Meadows: an eight-year-old’s firsthand knowledge of the incredible array of sights, sounds, smells, and tastes that was the Fair. However, even though Fair officials predicted that it would be the greatest single event in history, few people today would say that it achieved, or even came close to achieving, that lofty claim; the Fair has been either discounted or simply ignored by scholars and general writers alike. Not as beautiful as the Columbia Exposition’s “White City” in Chicago in 1893, not as progressive as the St. Louis World’s Fair in 1904, and not as optimistic as the 1939–40 New York World’s Fair, the Fair at Flushing Meadows is considered to be the ugly duckling (or perhaps the Ugly American) of global expositions. Overshadowed by its financial losses, European no-shows, heavy commercial orientation, and the looming, rather sinister aura of its president, Robert Moses, the Fair has been dismissed by critics as the one that put an end to major world’s fairs. Part of the reason was Moses. Then seventy years old, he was not only parks commissioner for both the city and the state but also head of the New York Power Authority, the Triborough Bridge and Tunnel Authority, the Slum Clearance Committee, and all arterial road construction. It is not an exaggeration to say that the only thing that changed the physical landscape of New York more than Robert Moses was the Ice Age. Depending on whom you listened to, the man was either a hero, leading New York into a better, more intelligently designed future, or a villain, destroying healthy, vibrant communities if they stood in his way of “progress.”

Much of the negativity about the Fair also had to do with the cultural climate that surrounded it. Its opening day was just five months after the assassination of President Kennedy, and it took place at a turning point in American history and during a period of remarkable cultural upheaval (as did the 1939–40 New York Fair). In the eighteen months from the beginning of season one in April 1964 to the end of season two in October 1965, a bevy of events related to the two major sources of conflict in the mid-1960s— civil rights and the Vietnam War—took place. While fair-goers munched on their Bel-Gem waffles and rode Avis’s Antique Car Ride at a top speed of six miles per hour, thousands were marching (and a few were dying) in Mississippi to register black voters during the Freedom Summer of 1964. Other milestones of the civil rights movement—the assassination of Malcolm X in February 1965, the Selma-to-Montgomery marches the following month, the Watts riots in August— were also taking place as “Peace Through Understanding” (the Fair’s theme) reigned in Flushing Meadows. Similarly, the civil rights laws that were signed by President Johnson during the run of the Fair—the Civil Rights Act in July 1964, the Voting Rights Act in August 1965, and affirmative action the next month—stood in stark contrast to Moses’s city-state in Queens, where America’s “Negro problem” did not exist and time appeared to stand still.

Vietnam too was rapidly becoming a nightmare, although global harmony, or at least Moses’s version of it, ruled at the Fair. From the Gulf of Tonkin Resolution in August 1964, to Operation Rolling Thunder in March 1965, to the start of “search and destroy” missions in June of that year, Vietnam was on the minds of most Americans exactly at the time when millions were gathering in Flushing Meadows in celebration of international brotherhood. As more troops were sent to Southeast Asia through 1964 and 1965, organizations such as Students for a Democratic Society marched and protested against the escalation of the war. Yet against the backdrop of these conflicts and the added social unrest of increasingly fuzzy gender roles and an unprecedented divide along generational lines, Robert Moses created a space that was essentially free from the turmoil of the mid-1960s.

Utopia— Or Something Like It
Rattled by this immense upheaval, American visitors in particular found the Fair’s cultural swagger and bravado to be a welcome anchor that provided stability and ballast. For the overwhelming majority of visitors, the Fair’s over-the top commerciality and conservative tone were not liabilities, as critics have argued, but assets that contributed to its tremendous popularity. The Fair’s imaginary universe looked backward as much as forward, offering visitors a bridge over the troubled waters of the times. (Guy Lombardo, a personal favorite of Robert Moses, led the unofficial house band at the Fair.) The post-World War II world may have had its anxieties, but after twenty years at least they were known, familiar, and contained. By contrast, the post-postwar world represented completely uncharted territory that the nation seemed unprepared to navigate. By sidestepping the uninviting near future for a more palatable far-distant one, the Fair offered its millions of visitors an oasis of faith, optimism, hope, and confidence that utopia (or something like it) was not an entirely lost cause. The American Dream was still very much alive in those 646 acres in Queens.

Walt Disney’s theme park in Anaheim had already been open for a decade; Disney wanted to open his second park on the Fair’s site after its run. As the quintessential fantasy world that offered visitors refuge from the less than- magical realities of everyday life, the Magic Kingdom provided an ideal blueprint for Robert Moses to follow in building his own interpretation of the happiest place on earth. And he succeeded in creating a safe bubble that was virtually free from worldly concerns in order to make the Fair a popular success. Chaos may have reigned in the boardrooms of the World’s Fair Corporation and in the offices of elected officials, but precious little of it could be detected on the fairgrounds, where nations sang in harmony corporations existed to produce things that made life better, and the future looked brighter than ever. The same formula of success— science and technology—that had proven so reliable over the last few decades would lead America to an even more abundant promised land, this one made up of limitless energy, computerized efficiency, and push-button convenience.

In short, the make-believe universe of the 1964–65 New York World’s Fair was the final gasp of American innocence, the last time and place in which the harsh realities of everyday life could be ignored on such a large scale.