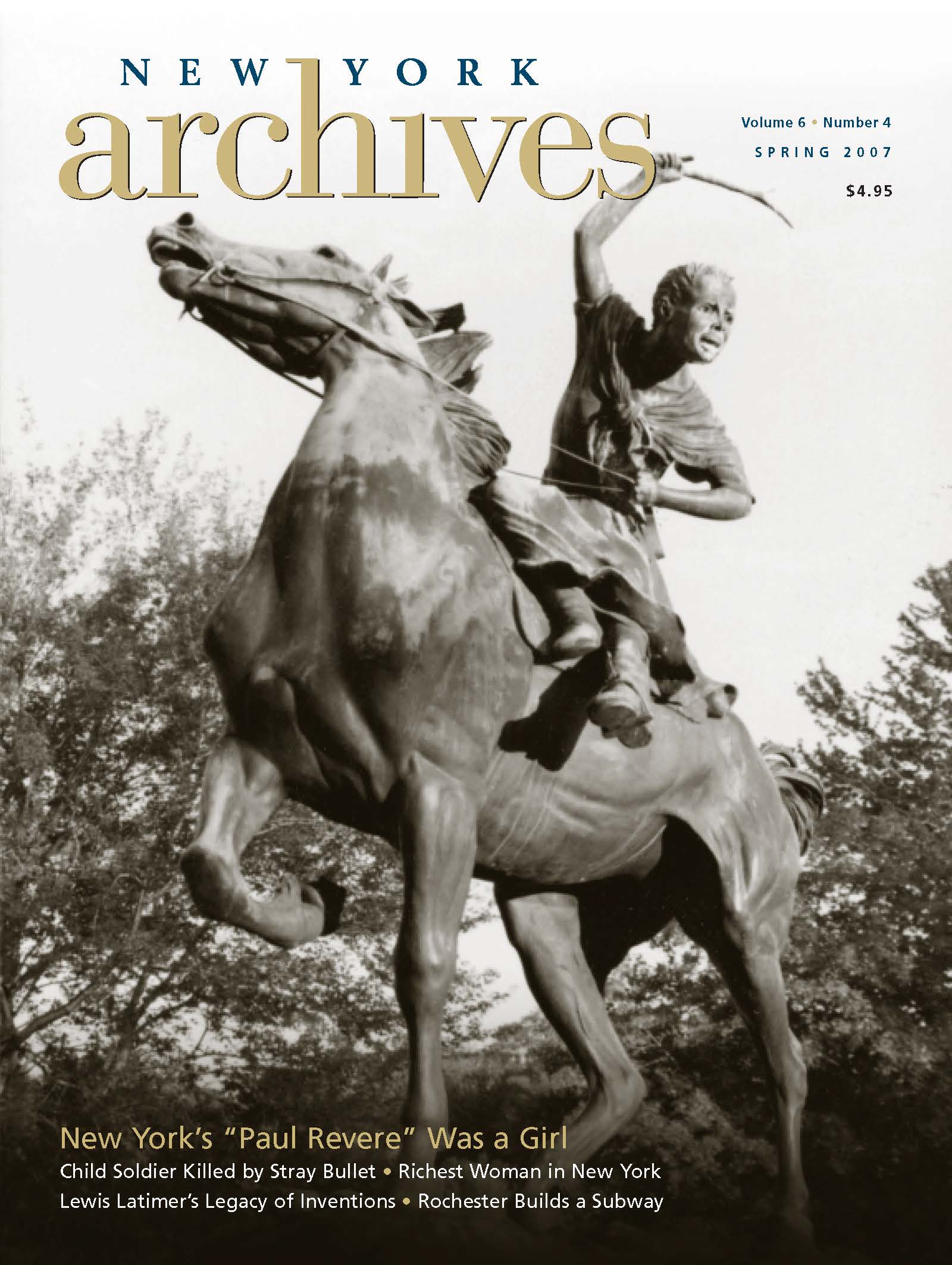 The She-Merchant of Manhattan
Jean Zimmerman
The first New World woman to make a fortune did so in a man's society: in the struggling outpost of New Amsterdam, before the English would change its name to New York

Pioneer of Light
Rayvon Fouche
Son of escaped slaves, a self-taught draftsman from Flushing helped develop electrical technology and rose to become one of America's inventor-heroes

The Little Drummer Boy
Vicki Weiss
A young Brooklyn recruit went off to war with his brother in 1861. But a bizarre accident caused only one of them to return.

The End of the Line
James P. Harte
Rochester was the smallest city in America to build--and abandon--a subway. It may be gone, but it's hardly forgotten.

New York Patriot
V.T. Dacquino
A sixteen-year-old girl rode through rural Putnam County to warn of a British invasion. Then the history books closed on her life--until now.

Like Paul Revere, Sybil Ludington became a hero of the Revolution after a daring night ride on horseback that warned Americans of a British attack. But Sybil’s life in New York after her ride was lost to history—until now.

I first heard of Sybil Ludington in 1997, via one of those yellow and blue historic markers that dot New York’s highways: “Sybil Ludington rode horseback over this road the night of April 26, 1777, to call out Colonel Ludington’s regiment to repel the British at Danbury, Connecticut.” But just who was this heroic woman? I began by reviewing some basic facts in my local library.

Sybil Ludington was just sixteen years old in April of 1777 when General William Tryon, formerly Royal Governor of New York, landed at Compo Beach in Connecticut with 2,000 British troops from twenty transports and six warships. Tryon marched across Connecticut to Danbury to destroy supplies and munitions that had been stored there by the American rebels. Within hours of his arrival, and upon consuming barrels of rum, Tryon’s drunken soldiers went on a rampage, burning homes and killing several Danbury residents. When word of the raid got out, American soldiers rushed to settle the score. The Americans sent out warning messengers in every direction, as Generals David Wooster and Benedict Arnold, receiving intelligence at New Haven, gathered escorts and moved westward, picking up various militia companies along the way. Meanwhile, General Gold Selleck Silliman was en route to Danbury with 500 militiamen, and Colonel Henry Ludington, several miles to the north, was summoned from Fredricksburgh in New York (part of which is now known as Ludingtonville, in the town of Kent, Putnam County) to bring 400 more men.

I found a further account of the incident by Willis Fletcher Johnson in his book Colonel Henry Ludington: A Memoir, published in 1907:“At eight or nine o’clock that evening a jaded horseman reached Colonel Ludington’s home with the news…But what to do? His regiment was disbanded; its members scattered at their homes, many at considerable distances. [It was April, planting season, and the farmers needed to tend their fields and had been granted leaves to get their work done.] He must stay there to muster all who came in. The messenger from Danbury could ride no more, and there was no neighbor within call. In this emergency, he turned to his daughter Sybil, who, a few days before, had passed her sixteenth birthday, and bade her to take a horse, ride for the men, and tell them to be at his house by daybreak. One who even rides now from Carmel to Cold Spring will find rugged and dangerous roads, with lonely stretches… But the child performed her task…as she rode through the night, bearing the news of the sack of Danbury… By daybreak, thanks to her daring, nearly the whole regiment was mustered before her father’s house at Fredricksburgh, and an hour or two later was on the march for vengeance on the raiders…That night they reached Redding, and joined Arnold, Wooster, and Silliman. The next morning, they encountered the British at Ridgefield…and made [the British] retreat to their ships at Compo resemble a rout…Arnold had his horse shot from under him as, almost alone, he furiously charged the enemy, and the gallant Wooster received a wound from which he died a few days later. There were far greater operations in the war than this, but there was scarcely one more expeditious, intrepid and successful.”

A Prospective Biography
I was immediately taken by Sybil’s story. Paul Revere, in his forties, had traveled twelve miles to warn of a British invasion, but sixteen year-old Sybil had ridden more than forty miles. Paul Revere rode through populated Boston on a clear night, but Sybil rode through woods and brush over mud-laden paths. Paul Revere had two helpers, while Sybil had none. Paul Revere was captured—but Sybil wasn’t. There were great differences in their stories and their reasons for riding, but it seemed that Sybil had earned her own place in history, and I set out to write her biography.

I thought the research would simply involve gathering the necessary documents from the many archives and repositories in New York. I picked out a favorite chair at the Putnam County Historian’s Office in Brewster—and then discovered that there was little or no biographical information on Sybil’s life after her famous ride. There were countless articles, but most of them contained information about her father (the colonel) and the Revolution, and just repeated the same information about her own ride. Articles from the 1930s to the late 1990s told of the markers erected in 1935 along the route of her ride, a statue of her dedicated by Anna Hyatt Huntington in 1961, and a United States commemorative postage stamp issued in 1975—but the most peculiar item was one paragraph that appeared at the end of each article: “After her famous ride, Sybil Ludington lived to be seventy-seven years old. She married her childhood sweetheart, Edmond [or Edward, or Henry; the first name varied with the article] Ogden, who was a lawyer in Catskill, New York. Sybil bore six children: four boys and two girls. One of her children was a hero in Kansas. The family later moved to Unadilla, where Sybil died on February 26, 1839.”

The paragraph was interesting enough, but it hardly covered more than sixty years of a hero’s life. I realized that the way to begin my research was with the six Ogden children. But there were no graves to be found, nor any medical, school, birth, or death records. In fact, there was no mention of their names in any history books, newspapers, or archives. As for Sybil’s husband, he not only did not have a grave; there was also no record of his law practice in Catskill. A trace of Sybil’s “son” in Kansas was also confusing: Edmund Augustus Ogden, hero of Fort Riley, Kansas, who had remained with women and children stricken with cholera at the cost of his own life, was a graduate of West Point, and his mother’s name was Julia, not Sybil.

Breakthrough
After these disappointments, I spent three frustrating years doing research in Washington, D.C., as well as in Albany, Catskill, and Unadilla, New York and in countless libraries and archives. Very quickly I gained respect for New York’s archivists and historians. But the answers to Sybil’s puzzle began to emerge, with a line here and a document there. A breakthrough came with my discovery of a series of articles written by Mabel Parker Smith, a historian from Catskill. I soon uncovered deeds and did genealogical searches in a Mormon Church basement in Ossining, New York; a second breakthrough required a trip to the National Archives in New York City, where I reviewed a file on “Cibal” Ogden that had remained nearly unnoticed since 1839.

The result of my efforts is my book, Sybil Ludington: The Call to Arms, the first birth-to-death account of the young female hero that is documented by primary source research. And it corrects that erroneous paragraph that had been repeated for years.

After her famous ride in 1777, Sybil Ludington remained a member of her mother’s household until she was twenty-three years old. At that time, she met Edmond Ogden, whose family had recently moved to New York. They married in 1784, and Sybil gave birth to a child in 1786. They sold the land they lived on in Fredricksburgh, New York in April 1793. On August 23, 1793, Edmond signed a school subscription, donating money to a school his son attended in Catskill, New York. He donated money again in 1795. By 1799, Edmond was dead from yellow fever, and his body was cremated.

In 1803, widow Sybil Ogden bought a tavern on the corner of Green and Main Streets in Catskill. She assisted her son in becoming an attorney. Six years after she purchased the property, she sold it for over three times her purchase price and traveled up the Catskill Turnpike to Unadilla, New York, where she purchased a home for her son and his family. She lived with them for thirty years. Around 1838, her only son, Henry Ogden—who by then was the father of six children, four boys and two girls—died. One of those boys was Major Edmund Augustus Ogden, hero of Fort Riley, Kansas. Sybil applied for a pension from the United States government on September 8, 1838, and provided proof that her husband Edmond had served three terms of military service during the Revolution; one of those terms was with John Paul Jones on the Bonhomme Richard. But her pension was denied because she produced “insufficient proof of marriage.” Sybil Ludington Ogden died in poverty on February 26, 1839, and was buried with her parents behind the Presbyterian Church in Patterson, Putnam County, New York.