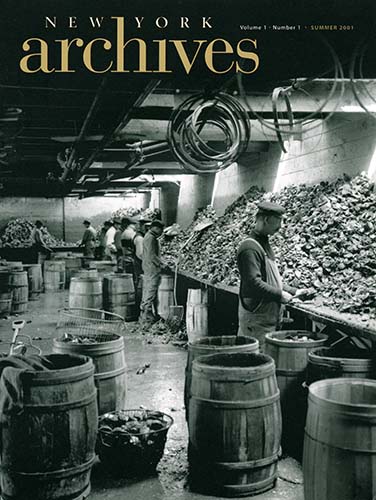 The Legacy of the Capitol Fire
Judy P. Hohmann
Explaining the gap in New York's history

The Poetry and Prose of the Emancipation Proclamation
Harold Holzer
The most revolutionary, daring, and controversial document of the nineteenth century

A Conversation with William Kennedy

"I guess it dates back to the 1960s when I was going through old newspapers for an assignment…and out of that experience came the awareness of how fragile the historical record was."

It's a late afternoon in winter, and William Kennedy, author of a dozen books, among them the "Albany cycle" of novels that includes the Pulitzer Prize-winning Ironweed, is describing his first encounter with archival records: handling the crumbling pages of aging newspapers. The experience he refers to began more than thirty-five years ago in an Albany newspaper morgue. He had just returned to his native Albany after seven years as a journalist and editor in Puerto Rico, and the mention of that sun-filled island creates, at least in this writer's imagination, a strong counterpoint to the snow outside.

His general assignment from an Albany Times Union editor, he explains, was to write about Albany's neighborhoods. That assignment would eventually become the basis for his critically acclaimed non-fiction book O Albany! (1983), a lively history of the capital of New York State and, not coincidentally, his hometown.

"The old newspapers proved so valuable to me that I wanted to own them," he said. "I now have every issue of the Albany Argus from 1883 to 1921, when it went out of business." He leaves the room and returns with a large, cumbersome, bound volume and turns the pages of the now-defunct newspaper. "I use these all the time. For the novel I just finished I tracked the 1919 election of Dan O'Connell, who became the town's political boss. I could follow the election coverage day by day. When I wrote The Flaming Corsage, I was able to move through the social life of the 1890s via the daily pages of the Argus".

But old newspapers are not Kennedy's only sources of fact and inspiration. When asked if he feels transported back to the period about which he is writing, the journalist-turned-novelist agrees. "Oh, I do. I feel when I'm writing as if I'm a resident of Elk Street, or Colonie Street, or Broadway in the North End. I once found a map from 1876 that gave me a picture of what my neighborhood was like long before I was born. It brought that whole long-gone city back to life for me."

He found the map in the Albany Public Library; it shows forty-two piers of a thriving lumber district between the Erie Canal and the Hudson River in his North End neighborhood. He was captivated. "When I grew up there were no piers, and the canal was gone. But Albany had called itself the white pine center of the world - lumber companies denuding the Adirondacks, shipping logs down the canal to North Albany for conversion to lumber for trans-shipment everywhere. It was such a vibrant thing to be able to reconstitute at will those long-gone days of the city."

Kennedy mined old city directories, and talked to people in their 80s and 90s who lived in the old days. "I discovered a way of life that I hadn't a clue about when I was living there as a boy - the railroad, the paperworks, the baseball park, the rural tavern where they staged bare-knuckle boxing and cockfights. I could move around the city, see what Dove Street was like and who was living on it the night Jack Diamond was killed."

Kennedy's reconstituted city appears throughout his novels, and critics have said that if Albany were destroyed tomorrow some of its sections could be reconstructed from his books.

Kennedy believes in the importance of historical authenticity to both journalism and literature. "I have this belief in hard fact," he says. "It drives me crazy to read a story that leaves out essential details that should be there. You know the writer really doesn't know what he's writing about. A story comes to life with the real details of history, even if you invent them. But you can't invent convincingly if you're ignorant of history."

Kennedy says he "went through any kind of historical volume I could find" to write his novel Legs, the story of the gangster Jack (Legs) Diamond who was notorious in Albany and was murdered there. He estimates he spent six years writing the novel, two of those years under a microfilm machine reading old newspapers: the New York Times, the Daily News and Daily Mirror, all the Albany newspapers, and many more.

Was there a particular archival record that prompted an especially emotional or poignant response from him? "The Albany Chronicles, compiled by Cuyler Reynolds," he says. "It's a record of the entire history of the city taken from archival records, and also from newspapers, and I followed the life of the city day by day from the time of Henry Hudson up through 1906 when it ends. It was magical."

He also mentions the writings of Huybertie Pruyn, an old Dutch aristocrat who chronicled her family's and the city's life during the last two decades of the nineteenth century and the beginning of the twentieth: "A treasure trove, an avenue into a forgotten time." Kennedy also remembers the access he was given to the clipping files of the New York Daily News when he was tracking Legs Diamond. "I spent two days in the city room typing for eight hours, as fast as I could, to copy the clips. It was the only way to do it. No microfilm or copiers were available to me. But it illuminated the age more than anything I ever found elsewhere."

Kennedy rises from the cordovan leather chair in his wood-paneled den to search for something, and finally produces a framed copy of a record that is especially evocative for him: the Wanted poster for Legs Diamond. He sums up his regard for the historical record in one sentence: "These archives have been absolutely priceless to me."