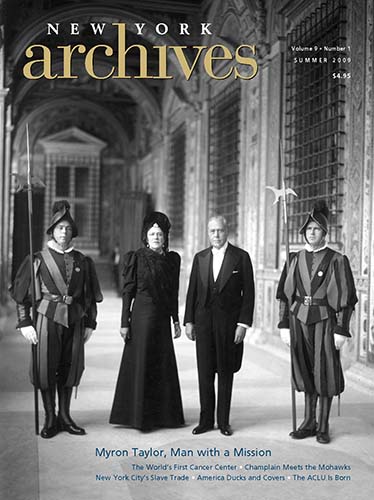 The Man Nobody Knew
C. Evan Stewart
Myron Taylor, industrialist turned diplomat, helped defuse America’s twentieth-century crises from the Depression to the Cold War—purposely out of the spotlight.

The Defeat of the Iroquois at Lake Champlain
David Hackett Fischer
On July 29, 1609, Samuel de Champlain and his Indian allies faced down a group of Mohawk warriors––a battle that would forever change North American warfare.

Alert America
Joshua Muse
Tractor-trailer convoys took to America’s roads in the 1950s to educate citizens about civil defense. But what did the government seek to accomplish by frightening people?

Physician with a Vision
Donald L. Trump and Edwin A. Mirand
In Buffalo, the renowned Roswell Park Cancer Institute was founded in 1898 by the physician whose name is still synonymous with cancer research, treatment, and education.

“These Pimps of Piracy”
Ron Soodalter
Of all the cities in America, none was as invested in the Atlantic slave trade as New York. By 1860, a crisis was assured.

“Sympathy for Revolutionaries”
Frank Donegan
In the age of the “Red Scare,” and before there were card-carrying members, the American Civil Liberties Union was founded in New York to uphold the Constitution for all.

The Man Nobody Knew

In his day, Myron Charles Taylor, born in 1874, was America’s leading industrialist: czar of the textile industry, and later, in the 1920s and 30s, head of U.S. Steel. But because of his prominence, he also became a key diplomatic participant in some of the most important geopolitical events of the World War II era. Taylor is little remembered today, however, in large part because of his intense personal distaste for publicity; for much of his business career, the national media called him “the man nobody knows.”

Although Taylor would later own a seventy-room mansion in New York City, a fabled villa in Tuscany, and a baronial country estate on Long Island, he was born and grew up in the small upstate town of Lyons (Wayne County), just south of Lake Ontario, where his father owned and operated a tannery business. Young Myron dreamed of becoming a lawyer; that dream took him to Ithaca and Cornell Law School, where he earned a Bachelor of Laws degree in 1894. He returned to Lyons and, for a time, struggled to establish a small town law practice.

Textile Czar
In the course of litigation he handled for his father’s tannery, Taylor bid for and won a U.S. government contract to manufacture mail pouches and related products. As the company expanded rapidly beyond tannery products to cotton, Taylor began to acquire struggling mills, transforming their labor practices and modernizing their technology; this modus operandi later became known as the “Taylor Formula.” Blessed with an uncanny sense of timing, able to apply the formula with great discipline, and demonstrating remarkable skills in corporate finance, Taylor soon consolidated and eventually dominated the textile industry.

By the 1920s, Taylor was an extremely wealthy man. Having foreseen the boom bust cycle in the commodities market, he had gotten out of the textile industry altogether, anticipating a blissful retirement and plenty of world travel with his wife, Anabel. But then his friend, J.P. Morgan, persuaded him to get involved with and ultimately take over the reins of the world’s largest industrial company, U.S. Steel. Taylor was reluctant, but agreed to do it.

After studying the company’s struggling operations for nearly two years, Taylor identified the first priority: reduce U.S. Steel’s existing indebtedness, which totaled a staggering $400 million. Just before the stock market crash in October 1929, he retired $340 million in debt, saving U.S. Steel approximately $31 million in annual debt servicing costs (and, as J.P. Morgan noted, also saving the company from being “busted permanently”). During the depths of the Depression, when U.S. Steel was operating at 17% capacity, Taylor refused to fire employees. Instead, he instituted a share-the-work program whereby at least 75,000 workers kept their jobs (and thus their income). During this difficult period, Taylor also applied the “Taylor Formula,” reorganizing U.S. Steel’s operations and upgrading its technology.

He also took another major step. In 1937, as “all America gasped,” Taylor struck a deal with John L. Lewis, then head of the Committee for Industrial Organization (CIO). U.S. Steel agreed to recognize a CIO subsidiary that would represent and organize the company’s workers, becoming the first major industrial company in America to reach an accord with organized labor. Although many captains of industry blasted Taylor as a traitor, in J.P. Morgan’s view “[Myron’s] was the finest performance I have ever known.”

“Ambassador Extraordinary”
Although Taylor literally saved U.S. Steel during the Depression and restored it to robust health, he relinquished the position of CEO in April 1938. Once again, he hoped to enter a “sabbatical period of life” with his wife Anabel— but this time yet another friend, President Franklin Delano Roosevelt, called upon Taylor to undertake critical diplomatic duties as the president’s “Ambassador Extraordinary and Plenipotentiary.” Taylor’s first assignment from FDR was to help solve the deepening crisis of Jewish refugees who were attempting to flee persecution in Hitler’s Germany. Taylor’s efforts actually led to a deal with Hitler and Goering: the Nazis agreed to permit 150,000 “able-bodied” Jews to emigrate, with their dependents allowed to follow later. Undersecretary of State Sumner Welles told the president it was “better than we hoped for.” Unfortunately, because of the Nazi takeover of Czechoslovakia and Poland and the onset of World War II, those efforts achieved no tangible results.

On Christmas Eve, 1939, FDR asked Taylor to be his personal representative to Pope Pius XII. This very controversial move, which in many ways represented the crafty and purposeful FDR at his best, led to what was termed the “Taylor Mission” and Taylor’s critical involvement in such matters as ensuring that Lend-Lease aid (approximately $8 billion in 1941 dollars) got to the Soviet Union, which at that point was about to be overrun by the German Army. Taylor also brought the first documented proof of the Holocaust to the Pope and his senior advisors, convinced Generalissimo Franco of Spain not to join the war on the side of the Axis powers, and lobbied Prime Minister Salazar of Portugal to permit an Allied airbase in that neutral country. Taylor also helped broker Italy’s surrender and Mussolini’s departure, ensured that the Catholic Church did not break from the Allies’ policy of unconditional surrender, and almost single-handedly provided the mechanism and means for Italy’s post-war recovery.

During the war, when Taylor was based in Washington and unable to travel to Rome, FDR asked him to undertake a number of planning efforts. For example, Taylor chaired the economic committee whose work resulted in the Bretton Woods Agreement, and he was crucial to the planning and ultimate success of the United Nations. To avoid Woodrow Wilson’s fatal mistake of political isolationism with the League of Nations after World War I, one of Taylor’s principal assignments from FDR was to round up key Republicans to support the UN. Taylor also served on the State Department’s Subcommittee on Territorial Problems under the leadership of Dr. Isaiah Bowman, then president of Johns Hopkins University. The group focused on the massive refugee population (approximately twenty million) that was being created as a result of the war’s devastation.

A Fateful Prophecy
A priority for the Bowman group was to figure out what to do regarding the issue of Palestine. With the formation of the League of Arab States, encouraged by Britain, as background, on March 14, 1944 Taylor wrote to Secretary of State Cordell Hull about his concern over efforts “to encourage a consolidation of the Arab world,” stating that such a plan “is filled with dangers of many sorts.” Among Taylor’s worries was the fact that “we in this country know all too little about [the Arab world].” He added, with amazing prescience, “Perhaps one thing the world has to fear in the future is that strong aggregation of people bound by ties of blood and religion, especially those who are almost fanatical, now separated into groups and tribes and states, may join themselves
together to oppose… the relatively smaller numbers of the Anglo-Saxon world.”

When I found and read this memorandum in a collection of Taylor’s papers at the Library of Congress, I wondered what Secretary Hull’s response had been to Taylor’s prediction of future conflict with the Arab world. On my next trip to consult the main body of Taylor’s papers in the Olin Library at Cornell University, I found Hull’s response in a memorandum dated April 1, 1944. Hull was clearly influenced in his thinking by British Foreign Secretary Anthony Eden, citing at length a 1941 speech by Eden: “It seems to me both natural and right that cultural and economic ties between the Arab countries, yes, and the political ties too, should be strengthened. His Majesty’s government for their part will give their full support to any scheme that commands general approval.” Hull then went on to pooh-pooh Taylor’s concerns, opining that “the difficulties existing to Arab unity are far from negligible, and the initial steps in that direction would in all probability be only cultural and economic lines.”

Unfortunately, Hull (and Eden) were proven to be wrong. 1945 saw the implementation of the Arab League Pact, which later that year boycotted Jewish businesses in Palestine to oppose the formation of Israel. And in 1947, the British withdrew support for its Mandate of Palestine, stating that it was unable to find a solution acceptable to both the Jews and the Arabs. Later that same year, the UN approved the partition of Palestine into two states—one Jewish, one Arab—with Israel declaring independence in 1948. Most historians agree that the contemporary roots of the Arab-Israeli conflict, and probably Muslim extremism, stem from this post-World War II period. Taylor continued to press President Truman with his geopolitical concerns on this front, but his and others’ views, notably those of Secretary of State George Marshall and Undersecretary of State Robert Lovett, were overruled after a bitter intra-administration debate initiated by Truman and buttressed by his principal domestic advisor, Clark Clifford.

“A Useful Life”
After World War II, President Truman asked Taylor to continue on in his ambassadorial capacity to the Vatican, but with the advent of the Cold War the Taylor Mission morphed into a different model, more oriented to visiting church officials (and others) throughout Europe, particularly in Russian-dominated areas of central and eastern Europe. Taylor’s new mission was primarily designed to gather Cold War information to which no other Westerner had access, and to shore up opposition by the Catholic Church to the Soviet Union in fragile post-war Europe. By all measures, he succeeded on both scores.

In 1948, the pope named Taylor a Knight of the Order of Pius IX, First Degree, and on December 20 President Truman awarded Taylor the Presidential Medal for Merit. Truman praised Taylor for having “earned the accolades of his countrymen whom he has served faithfully and well wherever duty called him.” Shortly thereafter, Taylor informed both the pope and the president that he would finally be retiring—a decision made public in January 1950.

Myron Taylor quietly lived out the remainder of his life. He did not publish his memoirs or seek public accolades. His beloved Anabel died on December 12, 1958, and Taylor died five months later, on May 6, 1959. The New York Times, reviewing his “extraordinary abilities” and his multifaceted career, employed considerable understatement when it concluded that “[h]is was, indeed, a useful life.”