As time progressed, citizens began to turn their backs on the Erie Canal. On October 26, 1903, a statewide vote on $101 million in proposed canal improvements was just a week away. But many people in upstate New York, including some residents of Binghamton in Broome County, believed that a new Barge Canal, with its proposed 1,000-ton vessels, would not be worth the taxpayers' money. That much money (more than the value of all the public schools in the state) was too much, especially for Broome County citizens.

Trains were a common sight in Binghamton, and a number of railroads were well established there by the turn of the twentieth century.  In addition, the Chenango Canal, which had linked the city with the Erie Canal in the mid-1800s, had closed thirty years ago, severing the county's loyalty to canal travel. Most Broome County residents saw no direct benefit from the new Barge Canal, which was located seventy-five miles away from Binghamton.

Those in favor of the proposed Barge Canal System argued that the new canal would be much deeper, wider, and more modern than the Erie Canal and its branches. Boats would no longer have to be pulled by mules or horses. New vessels built for the improved canal would be either self- propelled or towed by tugboat.

New engineering would allow the Canal's improvers to harness rivers and lakes for navigation instead of ditches. Concrete, a relatively new building material, would replace cut stone during construction of the larger locks.

These improvements would eventually allow boats to carry 100 times more cargo than boats on the Erie Canal. Barge Canal supporters appealed to the patriotic pride of New Yorkers to maintain their national treasure.

When the vote did on the new Barge Canal took place on November 3, 1903, almost 75 percent of the 1,100,000 people who went to the polls approved the canal proposition. It had great support in the populous counties at either end of the Erie Canal.

Supporters hoped the Barge Canal canal would help New York City remain a commercial giant, because grain and other products from the western states would still be shipped there. Buffalo would get cheap raw materials for its iron and steel industry. Other communities that benefited from bulk shipments for manufacturing also voted for the canal improvements.

Although voters authorized $101 million for the Barge Canal at the time, the costs eventually increased to $170 million. The first shovel-full of dirt was dug in 1905, and improvements were completed on May 15, 1918.

Even though the Barge Canal is no longer used for commercial cargo, many New Yorkers remember the days when barges loaded with oil, grain, molasses, fertilizer, wood, sugar, and even automobiles would pass through their villages and cities on the Canal. In 1951, when Barge Canal traffic reached its peak, oil was shipped in greater quantities than any other product.

Today, the Barge Canal keeps history alive by allowing people to use it the way the way the old Erie Canal was used. Pleasure boats have taken the place of huge barges and rugged tugboats. Boaters today can still travel more than 500 miles of waterways on the old Erie, Oswego, Champlain, and the Cayuga—Seneca canals, which make up the Barge Canal System.

Boaters can still rise and descend slowly in their boats through the fifty-eight locks, pass under the dozen or so lift bridges, and at a leisurely pace enjoy the many small villages, wide lakes, and picturesque rivers of this part of New York.

Amazingly, much of the same operating machinery installed in 1918 — the lock gates, gears, and control panels, for example — is still used, which adds to the historic charm of the waterway.

Identifier
NYSA_PPO_358
Description
Schoolchildren pose on a temporary footbridge across the New York State Barge Canal near Medina, east of Lockport, 1914.
Source
PPO File Folder #358
Rights
This image is provided for education and research purposes. Rights may be reserved. Responsibility for securing permissions to distribute, publish, reproduce or other use rest with the user.
Learning Activities 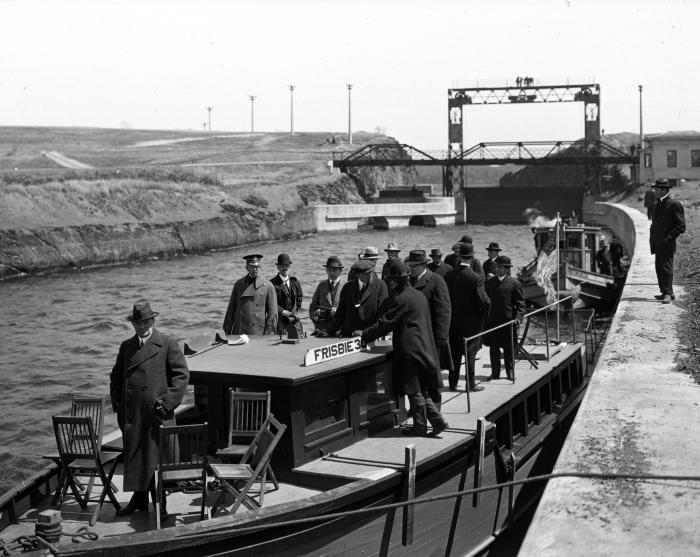 Identifier
NYSA_A3045-78_Test_8696
Description
Barge Canal – Governor Charles Whitman and other state officers [about 16 officials on a small wooden ferry boat, one on shore and other on another boat in background]. March 27, 1921.
Source
New York State Archives, New York (State). Education Dept. Division of Visual Instruction. Instructional lantern slides, ca. 1856-1939. Series A3045-78, Test slide no. 8696.
Rights
This image is provided for education and research purposes. Rights may be reserved. Responsibility for securing permissions to distribute, publish, reproduce or other use rest with the user.
Learning Activities 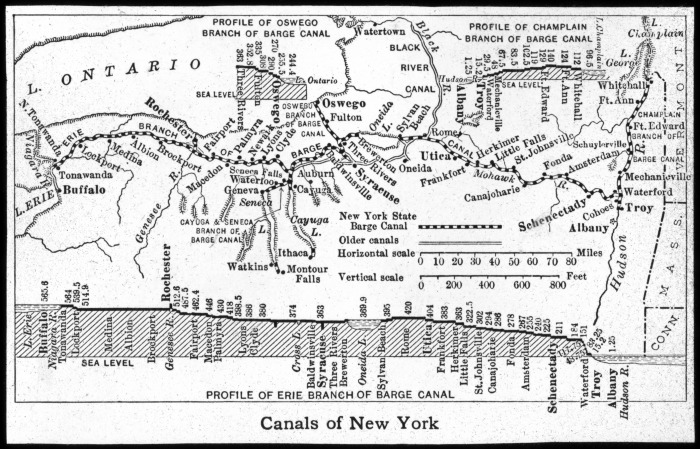 Identifier
NYSA_A3045-78_Dn_Bc12
Description
Map of the New York State Barge Canal System from Brigham and McFarlane's "Essentials of Geography" (1922), published by the American Book Co. The Barge Canal consists of four branches: the Erie Branch (the old Erie Canal), the Cayuga and Seneca Branch, the Champlain Branch, and the Oswego Branch. Another separate canal, the Black River Canal, is also depicted. Profiles of the Erie, Champlain, and Oswego branches are included.
Source
New York State Archives. Education Dept. Division of Visual Instruction. Instructional lantern slides, A3045-78, DnBc12.
Rights
This image is provided for education and research purposes. Rights may be reserved. Responsibility for securing permissions to distribute, publish, reproduce or other use rest with the user.
Learning Activities 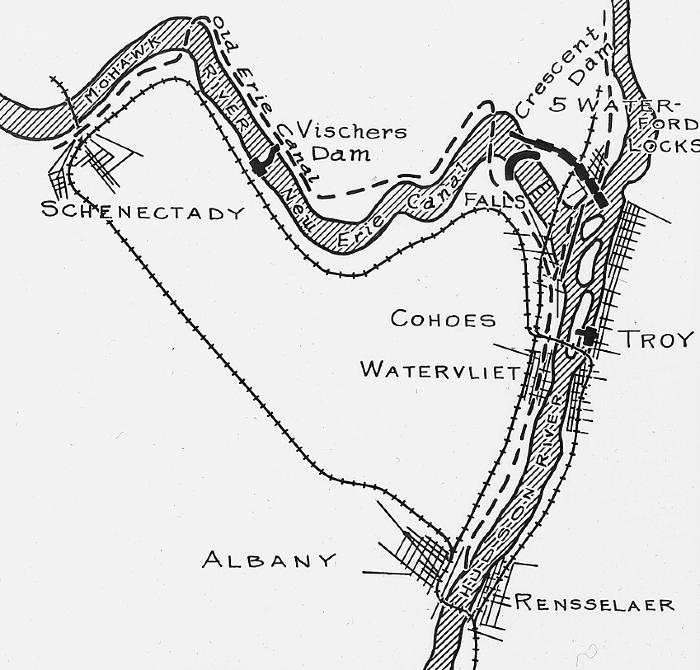