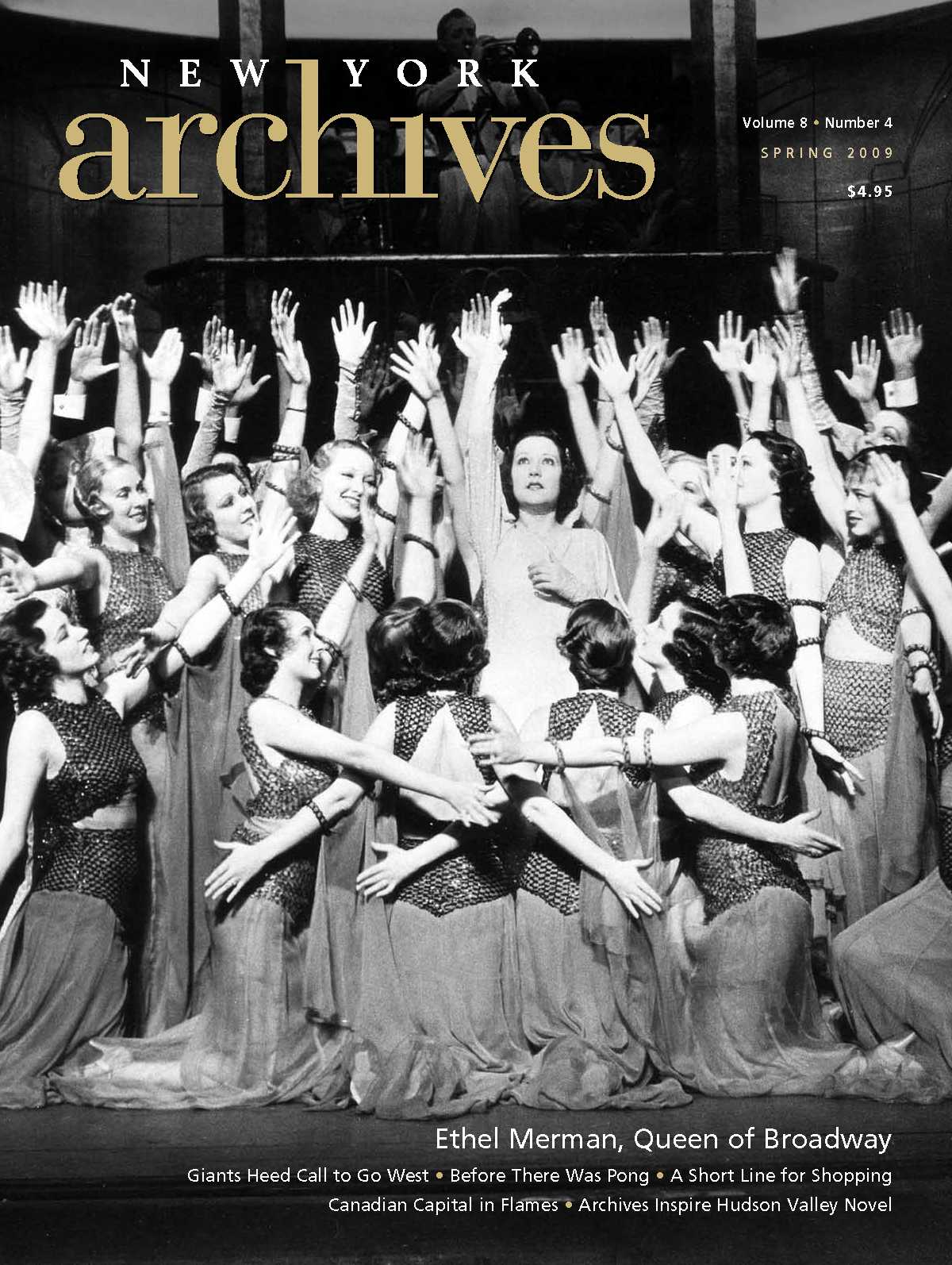 When the Giants Left Town
Charles F. Howlett
The Yankees, the Dodgers, and the Giants - that was baseball during its Golden Age, and at least for awhile, all of them played in New York.

New Yorkers at York
Robert Malcomson
In the War of 1812, the first town to suffer for enemy-laid fires was York, Canada's capital, and some New Yorkers helped in the burning.

The Buckwheat and Dandelion
G. William Beardslee
In the late nineteenth century, forty-nine miles of the Unadilla Valley were served by a short line railroad with fanciful nickname.

A Novel is Born in New York's Archives
Firth Haring Faben
An eighteenth-century Dutch family saga in the Hudson Valley comes to life again through a blend of fiction and fact.

Just over 50 years ago, William Higinbotham came up with an idea for entertaining visitors at Brookhaven National Laboratory in Upton, Long Island. He never imagined that his tennis game of 1958, displayed on a small oscilloscope and played with simple controls, would inspire a new industry: in the U.S. alone, total sales of video game hardware, software, and peripherals topped $22 billion in 2008, according to the Entertainment Software Association.

Brookhaven—taxpayer supported, with funding initially from the Atomic Energy Commission and later from the Department of Energy— has always been open to the public through various visitor programs. In earlier years, Brookhaven had annual “visitors’ days” in the fall, when thousands of people came to tour the lab and see exhibits set up in the gymnasium. Mostly the lab displayed dry posters about its basic research in the physical and life sciences. “Willy” Higinbotham, who was then head of the lab’s instrumentation division, knew from past visitors’ days that people were not much interested in static exhibits. So he decided to create something with more punch to it— a hands-on video tennis game.

I first interviewed Willy back in 1981 for an article in the Brookhaven Bulletin, the lab’s employee newspaper. A small man with a friendly smile and quickness in his manner, Willy came across as someone who loved life and lived it with zest. He chuckled as he told me about the long line of people snaking around the gym, all eager to play “Tennis for Two,” as he had dubbed the game. “Tennis for Two” was part of the division’s exhibit for two years, and it was a real crowd-pleaser. “If I had realized just how significant it was,” Willy joked, “I would have taken out a patent and the U.S. government would own it!”

Public recognition for Willy’s game came late. Prior to the 1981 article, the only mention of Brookhaven’s novel exhibit was in the introduction to a book titled Basic Computer Games by David Ahl, later the publisher/editor of Creative Computing magazine, who wrote that Brookhaven might have been where video games started. Ahl had gone to high school on Long Island, and he toured the lab in 1958. He wrote that he knew about computer gaming done at MIT and at a small company in Cambridge, Massachusetts as early as 1961, but was not aware of it being done anywhere else prior to 1958, the year in which he spotted the video tennis game at Brookhaven.

Willy Higinbotham’s Brookhaven colleague, David Potter, added another strand to the historical thread. Writing on the occasion of Willy’s eightieth birthday celebration in 1990, Potter recalled a high school boy who was especially interested in the tennis game: “He wanted schematics and really wanted to know how it worked. I believe that Willy sent him prints of it. Years later we learned that this boy had become the president of one of the first companies to market the product commercially.”

Basic Electronics
Willy’s 1958 game had essentially the same basic features found in today’s video games. Simulated on a screen was a vertical side view of a tennis court showing the edge of a floor with the edge of the net perpendicular to it. Each player had a knob and a button. Rotating the knob changed the angle of the ball, and a press of the button sent the ball toward the opposite side of the court. If the ball hit the net, it rebounded at an expected angle. If the ball went over the net but was not hit back, it would hit the floor and bounce again at a natural angle. If it disappeared off the screen, a reset button could be pressed, causing the ball to reappear and remain stationary until a hit button was pressed.

The game was run by an analog computer hooked up to an oscilloscope. “It was simple to design,” remembered Willy. “Back then, analog computers were used to work out all kinds of mechanical problems. They didn’t have the accuracy of digital computers, which were very crude at the time, but then you didn’t need a great deal of precision to play TV games.” Willy said it took about three weeks to put the game together. It was actually built by Robert V. Dvorak, a technician in the instrumentation division. Willy said the two of them worked collaboratively.

Based on Willy’s drawings, official lab blueprints were done by Alexander Elia, a design engineer in the same division. Willy said the blueprints showed a few relay contacts in the wrong position, but the game worked beautifully, so they must have been fixed in the actual circuit.

The electronics consisted mostly of resistors, capacitors, and relays, but where fast switching was needed—when the ball was in play—transistor switches were used. As Willy pointed out in 1981, “These days, this sort of simulation is done with solid-state switches, not with relays. Where I needed it, I took a step in the right direction.”

For the game’s debut, the oscilloscope display was only five inches in diameter. The next year saw improvements: the display jumped to seventeen inches in diameter, and players could choose to play tennis either on the moon (with low gravity) or on Jupiter (with high gravity). After the exhibit was dismantled, the computer and oscilloscope were separated and used for other jobs.

The Legal Side
Was Willy’s game the first? “Tennis for Two” was actually preceded by three other inventions—one in the late 1940s and two in the early 1950s. What was special about Willy’s game was that he had created a unique way to alternate among the computer’s outputs with the transistor switching circuit, creating the image of a tennis court and allowing players to control a movable ball that was seen on a screen, just like a modern video game.

Here’s what Willy knew about the legal side of the question. Sanders Associates applied for the first video game patent in 1964. The patent was purchased by Magnavox, which put out the first simple game in 1971. Magnavox then sued all other entrants to the field, the first in a continuing series of lawsuits and countersuits involving other giants like Atari and Nintendo.

Around 1976, a competitor’s lawyer discovered David Ahl, who had played “Tennis for Two” at Brookhaven Lab. Through Ahl, the lawyer tracked down Willy, who had the 1958 blueprints to prove the game’s date of creation. Other lawyers followed.

In February 1982, Willy made a deposition in the first lawyer’s office before the Magnavox lawyers and others. In June, Willy, David Potter, and Seymour Rankowitz, another Brookhaven colleague, were scheduled to testify at a trial in Chicago to break the Magnavox patent. The case was settled out of court before going to trial.

History-Making Science
Willy died in 1994, well aware of how wildly popular video games had become. He told me once that one of his daughters liked to play them, but he himself had never gotten hooked. He was more concerned about being remembered for his work with the Federation of American Scientists, founded in 1945 as the Federation of Atomic Scientists by himself and others who had worked on the Manhattan Project. They realized that nuclear proliferation was inevitable and that other countries would soon be able to develop nuclear weapons, leading to a nuclear arms race. They were convinced that the solution was to maintain transparency in nuclear research and international control of nuclear materials. The organization lobbied hard—and successfully—for federal legislation that established civilian control over atomic energy.

Willy joined Brookhaven Laboratory in 1947, its first year of operation, and retired in 1984 after thirty-seven years there. Two years later, Brookhaven’s historian interviewed him as part of an oral history series that included leading scientists at the lab. But in seventeen pages of transcribed text, he never once mentions the video game he invented to entertain visitors, though he talks about playing his accordion in square-dance bands, organizing bartenders for lively parties when the lab was starting up, and singing Christmas carols at an “old folks’ home” in nearby Yaphank. Mostly he recounts the how and why of the world-class science that developed over the decades at Brookhaven.

Willy ends the interview with these sentiments: “Did I anticipate that I was going to stay? The answer is no, certainly not. Did I anticipate it was going to become as fruitful and constructive as it has been? The answer is, I really wouldn’t have guessed that. I just thought well, it looks exciting, and we’ll see how it happens, and we certainly have had a lot of fun.”