The Legacy of Frances Perkins
Antonia Petrash
A witness to the Triangle Shirtwaist Factory tragedy became one of America’s most effective labor rights advocates.

Ground Observer Corps 2.0
Joe Collea
A small army of volunteers kept their eyes on the sky to protect America from Cold War
aggression. 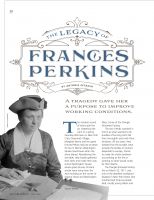 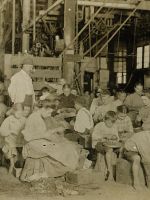 The Legacy of Frances Perkins

A tragedy gave her a purpose to improve working conditions.

The insistent sound of sirens split the air, shattering the calm of a spring Saturday afternoon in New York City’s Greenwich Village. Margaret Norrie and her guest Frances Perkins had just sat down for tea in Norrie’s Washington Square townhouse when the sirens blared. Abandoning the tea table, they hastily gathered their skirts and made their way across Washington Square where great plumes of black smoke were rising from the Asch building on the corner of Greene Street and Washington Place, home of the Triangle Shirtwaist Factory.

The two friends watched in horror as what seemed to be bundles of burning cloth fell from the eighth and ninth floor windows. All too soon, they realized that the bundles were actually the bodies of workers desperate to escape, forced to make the choice between succumbing to the fire or jumping to what would surely be their deaths.

The Triangle Shirtwaist Factory fire on March 25, 1911, was one of the deadliest workplace disasters in New York history. One hundred and forty-six people died, mostly young Italian and Jewish immigrant women whose dash to escape the flames was blocked by doors locked from the outside, rusty fire escapes that soon collapsed, a workplace crowded with overflowing bins of highly flammable refuse, and no sprinkler system. Thousands of spectators gathered to watch the carnage. But the two friends would have very different reactions to the event. Margaret Norrie would return to her comfortable life, while Frances Perkins’ life would be altered forever.

Social Justice
Fannie Perkins (she later changed her name to Frances) was born in Boston, Massachusetts, April 10, 1880. Her family was financially comfortable, though not wealthy, and considered it their duty to help the poor, which imbued in Perkins an acute awareness of social justice at an early age. After graduating from Mt. Holyoke College, she moved to Chicago where she taught high school and worked with progressive Jane Addams at Hull House, a settlement house that served the needs of indigent immigrants. In 1910, she moved to New York and took the position of executive director of the New York branch of the National Consumers League, where she was immediately put to work investigating labor abuses in New York City bakeries and lobbying in Albany for a fifty-four-hour work week for women and minors.

Perkins’ work for the Consumers League had taken her into factories much like the Triangle, where she witnessed unsanitary working conditions, lack of fire safety standards, and the appalling specter of very young children working long hours in dangerous conditions. Firewalls, fire doors, and automatic sprinkler systems were available in 1911, but without laws mandating their installation there was no impetus for factory owners to invest in them. As she witnessed the horror of the Triangle fire, she began to suspect that perhaps outrage from that tragedy could lead to real improvement in workers’ lives.

Factory Investigating Commission
Following the fire, there were hastily convened meetings, parades, and outpourings of shock and grief. A flurry of reforms was quickly proposed over the next few months by both private and political entities. The privately endowed Association for Improving the Conditions of the Poor hastily formed the Committee of Safety and hired Frances Perkins as its executive director. But of even more importance was the creation by Governor John A. Dix of the New York Factory Investigating Commission in June of 1911 with Perkins as an advisor. The first of its kind, the commission faced the broad challenge of “investigating the conditions under which manufacturing is carried out” in New York State. Its members received no pay, but expenses were paid. It was originally planned to work for one year; it lasted four.

The success of the Factory Investigating Commission can be attributed to the dedicated men and women who voluntarily served, which included New York Senate Majority Leader Robert Wagner and future governor Alfred E. Smith. Under the tutelage of Perkins, the commission investigated over 3,000 workplaces and personally visited fifty plants. “It was an astonishment for them to see the filthy conditions and obvious fire hazards,” Perkins recalled. Using its subpoena power, the Commission heard testimony from hundreds of experts on fire safety, chemical hazards, unsanitary working conditions, and industrial disease.

Of particular concern was the problem of child labor. On their factory visits, the commissioners witnessed children as young as six years old working. Factory owners employed children because they could pay them little or nothing, and their slight forms and small hands made them perfect for entering tight spaces, often with tragic results. Child labor also denied youngsters an education, often ensuring the continuance of a family’s spiral into poverty.

New Era
Between 1912 and 1914, the Commission proposed over thirty bills, most of which became law. Smoking in factories was prohibited, fire drills were mandated, and sprinkler systems were required in buildings more than seven stories high. Clean drinking water, sanitary restrooms, and regular factory inspections were mandated, and child labor under the age of fourteen in factories was prohibited. The enactment of these laws marked a new era in labor legislation in New York State. But not everyone was in favor of these reforms. Factory owners often fought back against costly regulations, and by 1915 enthusiasm for reform began to wane. Perkins knew she had to fight to keep the memory of the Triangle fire alive. And fight she did.

In January 1919, she was appointed by Governor Al Smith to the New York State Industrial Commission. The appointment came as a surprise—she didn’t know Smith very well and was amazed that he would appoint a woman to such an influential position. But Smith knew of her devotion to improving industrial conditions and the lives of workers. Among other powers, the commission could establish regulations over working conditions in dangerous trades, including the chemical industry where workers came in constant contact with toxic substances with sometimes tragic results.

Unemployment Insurance
Her concern was not just for worker safety on the job. She was also concerned about workers’ compensation off the job: unemployment insurance to pay the bills between jobs. Through her work on the National Consumers League, she had seen firsthand how families’ lives were disrupted when the breadwinner lost his or her job. She fought for workers’ compensation for those injured on the job, and battled unscrupulous doctors who brought bogus claims or helped insurance companies find ways to deny legitimate claims. Perkins held the position on the New York State Industrial Commission on and off for ten years, becoming chair in 1926.

FDR and Perkins
Perkins had met Franklin Delano Roosevelt in 1910, even before he served as a New York State Senator; she was often in Albany lobbying for reform bills and their paths would occasionally cross. Early in his career, he was not overly interested in labor issues, but as the years went by, his interest and commitment to labor reform deepened. In 1929, as governor of New York, he appointed Perkins to another term as a New York State Industrial Commissioner; when he was elected to the US presidency in 1932 and needed a secretary of labor, he knew exactly who to ask.

The story of Perkins’ interview with her prospective employer is almost legendary. She met him at his residence in New York City, clutching a piece of paper with a list of programs she would insist upon implementing if she took the proffered job: a forty hour workweek, minimum wage, workmen’s and unemployment compensation, social security, health insurance, and a federal law banning child labor. Her demands represented the entire revamping of national social structure. But Roosevelt wanted these reforms, and he knew Perkins could help him implement them. He agreed. She accepted the position, becoming the first woman to serve in a presidential cabinet, and began a program of radical social change that eventually came to be known as The New Deal. Frances Perkins served as labor secretary for twelve years, the longest term of any cabinet member. Almost all of her goals were achieved, and their effect still resonates in the lives of workers and citizens to this day.

Of course, as long as there are people working in factories, there will be dangers and disasters. Some employers and factory owners might fail to provide safe working conditions, with predictable consequences. Workers may become careless; accidents can occur. One of the latest industrial disasters occurred January 2021, when six people were killed and ten injured by a nitrogen leak in a poultry processing plant in Gainesville, Georgia. And since the manufacture of clothing moved to other countries, it seems to have taken the legacy of fire hazards with it. In December 2010, in Dhaka, Bangladesh, scores of workers were killed in a garment factory fire that is eerily reminiscent of the Triangle fire, where doors were locked and workers were forced to jump to their deaths from the eleventh floor.

Perkins died in 1965, five years before Congress passed the Occupational Safety and Health Act (OSHA), which “sets and enforces protective workplace safety and health standards,” shifting onto employers the responsibility to provide workers with a safe workplace. OSHA claims on its website that since its passage in 1970, workers’ deaths are down (on average) from thirty-eight per day in 1970 to fifteen a day in 2019, and workers’ injuries and illnesses are down (on average) from 10.9 incidents per 100 workers in 1972 to 2.8 per 100 in 2019. This is especially important today, as OSHA is charged with protecting workers from contracting Covid-19.

Perkins would have been delighted to see that the legally-mandated fire code of New York State now runs over 1,200 pages, and one of her most pressing concerns—unemployment insurance—is under renewed scrutiny by a new administration, as millions of workers have lost jobs because of the pandemic. There is no doubt that, despite present-day challenges, workplace safety and benefits have improved considerably since Perkins began her career.

Perkins never forgot that tragic March day in 1911. Her influence spread from New York City to New York State and across the entire nation. Every law or regulation or improvement she was able to implement was in memory of those 146 men and women who died in the Triangle fire. “Those laws,” she once said, “were based upon the sacrifices of those who we faithfully remember with affection and respect (who) died in that terrible fire. They did not die in vain and we will never forget them.”

he impetus for this article was an interest in how the effects of reforms implemented after the Triangle Shirtwaist Factory fire have endured, and how they affect us today. The New York State Archives holds the records of the New York State Factory Investigating Commission, many of which are available in Digital Collections. The digitized reports of the New York Factory Investigating Commission can also be found at Harvard University Archives. An interview with Frances Perkins is digitized and available at the Columbia University Archives.

For more about the Triangle Shirtwaist Factory fire, see “The Tragedy” by Matthew L. Lifflander, Summer 2011.