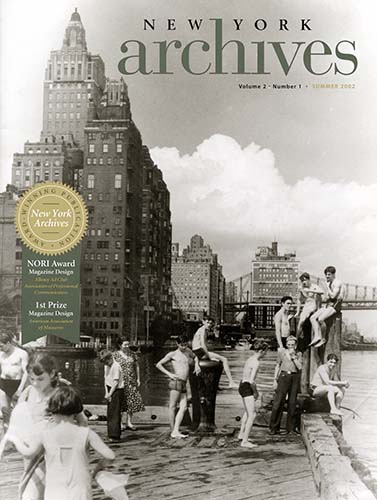 The Endless Summers of Chautauqua
Marilyn Mathews Bendiksen
The legendary western New York summer community marks 128 years as "a place, an ideal, and a force" in education

Making Motorcycles
Geoffrey N. Stein
A surprising number of the nation's early "motor bicycle" inventors and manufacturers got their start in New York's industrial base of the 1890s

Under New Management: The Legacy of the Jewish Catskills
Phil Brown
The son of a hotel owner recalls summer life in "The Mountains," where Jewish culture, cooking, and community made homes away from home for millions of New Yorkers

Saratoga Springs: Evolution of a Resort
Field Horne
Once a frontier mineral spring for the afflicted, the Spa City transformed itself into a posh upstate summer destination for both the wealthy and the worldly

Saratoga Springs: Evolution of a Resort

For two centuries, Saratoga Springs has been one of America's best-loved resort towns. True, it reached its zenith from 1870 to 1900—the most familiar images of Saratoga are those from the Gilded Age, following the Civil War—but those three decades are only part of the story. Archival documents, written by Saratoga's visitors, tourists, and vacationers from the 1700s on, reveal Saratoga's evolution from a healing spring to a playground for the rich to a resort rich with history.

Waters for the Afflicted
The first European-American to visit the springs was probably Sir William Johnson. In 1771, seeking relief from an old wound, he was guided by Mohawk friends to the High Rock Spring, whose mineral-laden water overflowed from a hole atop a curious haystack-shaped rock. When the Revolution ended, the doughty visitors who followed Johnson to Saratoga were motivated either by curiosity or the need for those healing waters. In 1784, General Otho Williams wrote to Washington about his visit: "One motive for extending my tour so far...was to visit the springs in the vicinity of Saratoga which I recollect you once recommended to me as a remedy for the Rheumatism. They are now much frequented by the uncivilized people of the back country, but very few others resort to them, as there is but one small hutt within several miles of the place."

In 1787, Columbian magazine published a view of the springs with an analysis of their mineral content, the first of many scientific reports. Yet Saratoga was still the frontier when William Strickland investigated the springs in 1794: "[T]hey are resorted to by people chiefly of the lower order, afflicted with sores and humours of the blood, but no tolerable accommodations are yet to be met with at the place."

The Beginnings of a Health Resort
However, taverns providing lodging and meals were built in the 1790s, and by 1802, when Gideon Putnam built the first real hotel, Saratoga was already known as a health resort. Alexander Coventry, a physician from Deerfield (Oneida County), stayed at "Putnam's Tavern" in September of its first year, and reported that the hotelkeeper kindled a fire in his chamber with "boards," probably scraps from construction. Coventry said less about the waters than about the cost; after his one-night stay, he noted, "Paid Putnam a bill of 12/-. Foolishly I did not inquire the items. He charges only 3$ a week for board, and how he got my bill up to 12/- I do not know."

As Saratoga's reputation grew, the roads were improved, and stagecoaches ran north from Albany. Invalids, drawn by both scientific reports and anecdotal information, visited in increasing numbers. In 1813, William Lord of Wilmington, North Carolina wrote to his wife with humor regarding the most common course of treatment: "You would be amused & disgusted to see the vast crowd at the Spring in the morning among whom are the first Ladies of company drinking the water, when the object is known by all the men, but even this is not the worst, for after drinking the necessary quart of Water, in order to aid the operation, the Ladies go directly to the House and walk the piazza (which is 200 feet long) among 20 or 30 men and when they feel the effects they pop out of sight for a short time, return, walk, be off, and return again, so on until all that is required is over."

The Fashionable Arrive
Those who had the leisure for what became known as the "Fashionable Tour" of Saratoga, Niagara Falls, Montreal, and places between joined the health-seekers after the War of 1812. But Ballston Spa, seven miles away, had an even more fashionable reputation. Robert G. Shaw of Boston wrote his mother in 1813 that "Balltown for the dashers carries the bell & while we have a humble collection of about thirty who really come to the Springs for the benefit of the waters, at Ballston they have more than five hundred of the giddy throng."

As the decade went on, Saratoga businessmen added amusements to lure the "giddy throng." Dancing was introduced by 1816, and soon balls were held three times a week. Billiards and bowling were already present, and fishing resorts, at what is now Yaddo and at Saratoga Lake, developed for those who enjoyed the sport, as well as for those who fancied a country drive or perhaps a fish dinner overlooking the water. Lavish hotel meals, served in vast dining rooms, were an integral part of the Saratoga experience. Waiters carried dish after dish to the long tables, where guests shared food but not conversation if they had not been introduced. Wealthy, sophisticated city dwellers put up with chaotic meals, small rooms—"about the size and temperature as an ordinary oven"—and dusty streets simply because fashion increasingly dictated that fashionable people were in Saratoga simply to be seen.

Railroads Open Access
But the dominance of patricians was short-lived. In 1832, the Schenectady and Saratoga Rail Road began operations, with trains pulled by horses its first summer and by steam engines thereafter. Philip Hone, the New York City diarist, wrote, "This is a pleasant mode of traveling, not very rapid but free from fatigue or inconvenience of any sort." No longer was the enjoyable steamboat trip up the Hudson followed by long hours in a stagecoach, jolting over bad roads. Thus the less-affluent public became more willing—and more able—to undertake the journey by train. Saratoga's popularity grew by leaps and bounds, and the refined atmosphere of the spa faded; in 1843, Henry McCall, Jr. of Philadelphia wrote to a relative, "Heaven help me for coming here for aristocracy!"

Gambling and Horse Racing
The introduction of gambling was another factor in Saratoga's allure. Andrew Reed, an English minister, wrote in 1835, "There is certainly gambling going on here, but...it must be sought for." The first scheduled horse racing, both harness and thoroughbred, took place at Horse Haven, Saratoga's first racetrack, in 1847; bets were most likely placed on these contests. The next year, a visitor recorded in detail the availability of faro, roulette, and other games of chance.

Visitors still drank the waters for their health, but they also demanded novel amusements. In the 1840s and 1850s, summer Saratogians could divert themselves with menageries and circuses, concerts, plays, magic lantern lectures, bowling, billiards, cards, an Indian encampment that offered crafts, and even the "circular railroad," on which a small train was propelled by a hand crank.

Southerners were always a large part of Saratoga's summer population—until 1861, when the Civil War prevented them from coming north. According to Englishman Hilary Skinner (and many others), Southerners were the leaders of fashion in every sense. Skinner recalled his 1860 visit: "We had prominent men from both sections of the country staying in the house, and one evening in particular, when some strolling musicians performed before a group of laughing guests, there were citizens standing side by side convulsed with merriment, who have since been deadly enemies." By the summer of 1865, the so-called "shoddy and petroleum aristocracy"—the new rich whose fortunes were made in war contracts—dominated the scene. Most of the Southerners were financially ruined—or dead.

But the war years gave birth to Saratoga's most enduring pasttime. In 1863, Horse Haven, the old race track that had been in use sporadically since 1847, hosted the first formal thoroughbred race meeting. A year later the present thoroughbred track was constructed, and despite a temporary loss of cachet in the 1890s (because of its sale to a somewhat coarse German immigrant gambler from New York City), Saratoga's became known as the finest racetrack in America.

A Spa for All Americans
All that new "war" money, along with the growth of a culture of leisure, resulted in a vast expansion of Saratoga from 1866 to 1874. The town had not only the racetrack, beautiful shops, and varied amusements, but three of the largest and most sumptuous hotels in America: the Grand Union, the United States, and Congress Hall, which between them could accommodate thousands. The truly rich, like the Vanderbilts, tended to stay in small private cottages on hotel grounds; but by the 1890s, seeking greater privacy, they rented—or in some cases, bought—mansions on North Broadway or Union Avenue.

Yet Saratoga was no longer a resort dominated by the elite. Through the 1870s and 1880s, conventions filled its hotels; day excursions brought farm families (think of the fictional Josiah Allen's wife, immortalized in 1887 by Marietta Holley in Samantha at Saratoga); and the burgeoning middle class sought Saratoga's entertainment, fashion, and even the benefits of its mineral waters. By the late 1880s, the resort had become a "spa" for all Americans, rich, middling, and poor. It offered high-quality accommodations, a plethora of diversions, and a very public stage for social leaders and celebrities.

Despite demographic changes, auto touring, the suppression of gambling, and a nearly complete eclipse in the 1950s, Saratoga's racetrack has remained a constant attraction, maintaining its historic reputation to the present day. And in the last forty years, America's greatest spa has once again reinvented itself, becoming one of New York State's most attractive places to play—and to live.

The letters, diaries, and memoirs used to analyze the economic and social history of Saratoga Springs are unusually numerous because of the town's high profile in the nineteenth century. However, personal accounts drop off after 1890 as a result of changes in vacation patterns and methods of communication. Many accounts written by New Yorkers are found in the New York State Library, the New York State Historical Association, and the New-York Historical Society. The Southern Historical Collection at the University of North Carolina has extensive holdings from all the southern states. Philadelphians have always been well-represented at the spa, and their writings are at the Historical Society of Pennsylvania. Most of the English and other European tourists' writings on Saratoga can be found in volumes they published when they returned home.