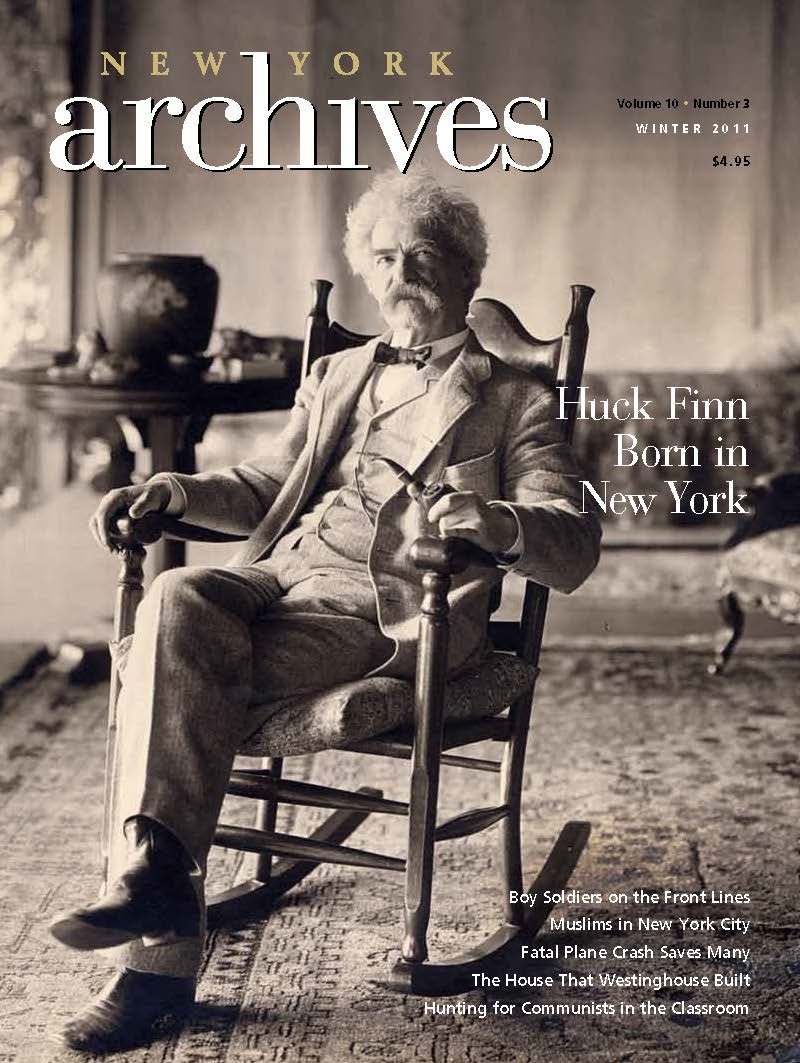 Mark Twain and Elmira
Mark Woodhouse
Tom Sawyer and Huck Finn may have lived near the Mississippi River, but they were born in Elmira, New York.

The Crash of Flight 112
Paul Roxin
Out of a Mohawk Airlines tragedy came benefits, for the aviation and specialized medical care.

Islam in New York City
Edward E. Curtis IV
Despite recent controversy Muslims have lived, prayed, and thrived in the city since the nineteenth century.

The Westinghouse Mansion That Almost Was
Charity Vogel
Inventor George Westinghouse decided to build his mother a present. Mom had other ideas.

Subversion in the Schools
Andrew Feffer
In 1940, there was a Communist in every New York City classroom--at least according to a state legislative committee.

For most people, the pen name Mark Twain conjures up visions of the American heartland: steamboats on the Mississippi River, Tom Sawyer, Huck Finn, and the idyllic fictional village of St. Petersburg, based on Samuel Clemens’s boyhood home, Hannibal, Missouri.

Clemens, however, was a citizen of the world. He traveled widely, and many places can lay claim to him by virtue of his having visited, lived, and worked in them. People are often surprised to learn, then, that his art and life are most deeply entwined with New York State, particularly Elmira, where much of his best-known work took shape.

The Courtship of Olivia
C Clemens’s connection with Elmira began when, as a young reporter from the West, he was commissioned in 1867 by a California newspaper to accompany and report on a group of travelers to Europe and the Holy Land on board the steamship Quaker City. One of the travelers with whom Clemens struck up an acquaintance was Charles Langdon of Elmira.

As legend has it, while anchored in the Bay of Smyrna, Langdon showed Clemens a picture of his sister, Olivia, and Clemens immediately fell in love. How true you find this story to be depends on the degree of the romantic in you, but at least there is evidence that Clemens was made aware of Olivia while on the voyage and that his interest in her was piqued. In the months after the journey, at a lecture by Charles Dickens in New York City, Clemens met Olivia Langdon and her parents for the first time. Shortly after this, he took the Langdons up on their invitation to visit Elmira. By this time he was most certainly in love, and he began his courtship of Olivia.

Olivia’s father, Jervis Langdon, was a prominent Elmira businessman who had made his fortune primarily in lumber and coal. A member of the Congregationalist Park Church that had formed from a split with the Presbyterians over the question of slavery, Jervis had also been active in the Underground Railroad and had served as a founding member of the board of trustees of Elmira Female College, the first college to grant degrees to women equal to those awarded to men at the time. Into this upper-class and progressive society came Sam Clemens, the self-educated, rough-hewn Westerner who, in relatively short order, was asking for the hand of Jervis’s daughter.

For his part, Clemens was in demand as a lecturer, and his book based on the Quaker City voyage, The Innocents Abroad, was about to make him well known as a writer. But he was by no means regarded as the perfect suitor. Nonetheless, after some encounters in which Jervis Langdon took careful measure of the man, consent was granted, and Sam and Olivia were married in February 1870 at the Langdon home. Two ministers presided: Reverend Joseph Twichell of Hartford, and Elmira’s Reverend Thomas K. Beecher, pastor of Park Church and a member of the prominent family that included Harriet Beecher Stowe, Henry Ward Beecher, and the feminist Catherine Beecher.

“Rest and Be Thankful”
As a wedding present, Jervis Langdon surprised the newlyweds with a home on Delaware Avenue in Buffalo, since Clemens had recently acquired part interest in the newspaper Buffalo Express. Sam and Livy remained in Buffalo only a little over a year before moving to Hartford, Connecticut, which would remain their primary residence for the next twenty years. But beginning in 1870 and continuing until 1889, their summer months were spent in Elmira, where they stayed with Olivia’s adopted sister, Susan Crane, and her husband, Theodore, at their home, Quarry Farm. It was on East Hill overlooking the Chemung River and the town of Elmira, a place Clemens called “Rest and Be Thankful.”

During these summers, Clemens settled in to work. By his own admission, life in Hartford offered many distractions, while the relatively quiet life at Quarry Farm allowed him to “pile up manuscripts” at a more satisfying rate. Susan Crane had a small octagonal study built for him farther up the hill above the farm. In one letter of 1883, he wrote, “…it’s like old times to step right into the study and sail right in and sail right on, the whole day long, without thought of running short of stuff or words.”

In his time at Quarry Farm, Clemens wrote major portions of his best-known works, including The Adventures of Tom Sawyer, The Adventures of Huckleberry Finn, Life on the Mississippi, and A Connecticut Yankee at King Arthur’s Court. In an interview with a Chicago Tribune reporter in 1886, he remarked that “this may be called the home of Huckleberry Finn and other books of mine, for they were written here.” In addition, Clemens’s first piece for the Atlantic Monthly in November 1874, entitled “A True Story, Repeated Word for Word as I Heard It,” recounts an evening on the porch during which Auntie Cord, the cook at Quarry Farm and an ex-slave, tells the story of the painful separation from her children and serendipitous reunion with her son. This was the most overt appearance of Quarry Farm in Mark Twain’s work, but other references to Clemens’s time and work there are abundant in his letters and notebooks.

One notable letter to William Dean Howells in 1877 tells of John Lewis, a black man who owned land near Quarry Farm. Lewis figures as the hero in a harrowing incident in which a runaway horse and buggy bearing Charles Langdon’s wife, their daughter Julia, and a nursemaid speeds down the steep East Hill and is stopped by Lewis, who blocks the road with his own wagon and grabs the bridle of the runaway, at great risk to his own life. Clemens’s vivid depiction of the incident shows the warm regard he had for Lewis.

The relationships revealed in both of these episodes are useful as part of the complicated conversation regarding Clemens’s attitude toward race. Evidence from the farm has also contributed to a more complete picture of Clemens’s other complexities as a man and as an artist. Some of this material was only discovered and made available to scholars in 1982, after the generous gift of Quarry Farm to Elmira College by Jervis Langdon Jr.

Discoveries in Elmira
For instance, many books at the farm were found to contain marginalia by Clemens. These annotations, and the books themselves, speak to his wide-ranging interests and intellectual curiosity. The casual reader, exposed only to the carefully contrived public persona of Mark Twain as a self-taught, simple humorist, might not be prepared for his insightful remarks in such titles as Carlyle’s French Revolution and William Edward Hartpole Lecky’s History of European Morals. Similarly, those who have noted Mark Twain’s casually intimate conversational style on the lecture platform might be fascinated by Livy’s copy of the poems of Robert Browning, which Clemens marked extensively with stress marks and stage directions for the readings he gave in Elmira homes, revealing his meticulous attention to preparation and presentation.

Another unusual artifact is the “Sermon in Stones,” a stone split into three slices. On the flat surfaces, Clemens wrote a verse in response to a friendly argument with Mrs. Thomas Beecher over the question of life after death. Mrs. Beecher, the wife of a minister, predictably argued for an afterlife, while Clemens came down with characteristic humor on the side of there being nothing at all after this life. The stones and the subject of the verse, besides giving further evidence of Clemens’s many friendships with clergy, offer a glimpse of his interest in theology and philosophical matters.

Among Clemens’s other acquaintances in Elmira were prominent progressives of the time. Zebulon Brockway, the superintendent of the Elmira Reformatory and a pioneer in methods of rehabilitation for prisoners, was a friend; Clemens spoke to the reformatory’s inmates on more than one occasion. Rachel Brooks Gleason and her husband, Silas, ran Watercure Sanitarium; she was a respected physician at a time when the profession was not always welcoming to women. She cared for Livy and attended the births of the Clemens children.

Continuing Connections
After 1889, financial difficulties and business setbacks forced Clemens to live abroad for a number of years, but in July 1895 the family gathered at Quarry Farm once again prior to embarking on an around-the-world lecture tour designed to free Clemens from his money worries. Daughters Susy and Jean stayed behind at Quarry Farm, while Sam, Livy, and daughter Clara made the long trip that was eventually chronicled in Following the Equator. Tragically, Susy, who had returned to the Hartford home in the interim, died of spinal meningitis while her parents were still abroad.

After her death, the Clemenses never lived in the Hartford home again. They returned to the United States in 1900, living first in Manhattan and then in Riverdale on the Hudson. In 1903, Sam and Livy returned to Quarry Farm for a brief visit before moving to Florence, Italy, where Livy died in 1904; afterwards, Sam lived in a leased home on Fifth Avenue in New York City until 1908. He built his final residence, Stormfield, in Redding, Connecticut, where he died in 1910. His last visit to Elmira was in 1907, for the dedication of a new organ at Park Church. He is buried in the Langdon plot in Woodlawn Cemetery in Elmira alongside Olivia, his three daughters, and one son, all but one of whom preceded him in death.

The connection with Elmira College, where Olivia had been enrolled as a student in 1858 and 1859 and where her father was a trustee, continued with Ida Langdon, Charles’s daughter, who taught English at the college from 1920 to 1942. Ida spoke at the dedication of the Mark Twain Study, which was moved from its East Hill location to the Elmira College campus in 1952, thirty years before her nephew, Jervis Jr., gave Quarry Farm to the college and the Center for Mark Twain Studies was established.