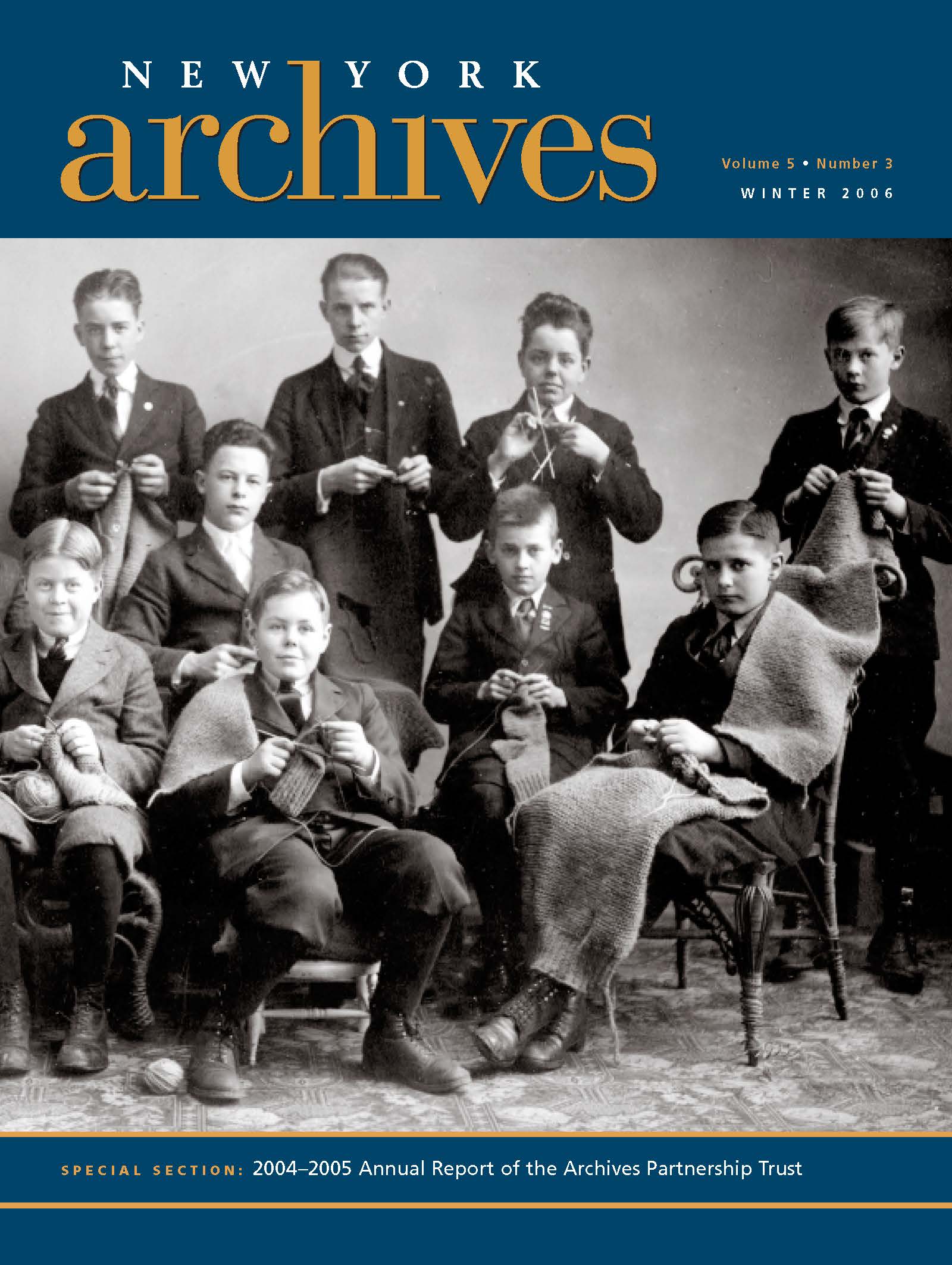 House of Refuge, House of Cards
Amy M. Surak and Peter J. Wosh
Covenant House, the Catholics faith-based charity begun in New York City, is a bulwark for homeless and desperate urban youth.  But in the 1990s, controversy nearly led to its collapse.

Pins and Needles
Robert D. Parmet
In the middle of the Depression, the labor movement met the Broadway stage.  The result: a hit for both.

Freedom for a Stranger
Dennis J. Connors
In 1851, Jerry Henry was a slave who successfully escaped to Canada.  James Clapp was a Syracuse abolitionist who helped him-and who paid dearly for his efforts.

House of Refuge, House of Cards

Covenant House, the Catholics faith-based charity begun in New York City, is a bulwark for homeless and desperate urban youth.  But in the 1990s, controversy nearly led to its collapse.

Covenant House, a Catholic oriented charity that provides shelter and social services for homeless youths, has been an important and occasionally controversial part of New York City’s philanthropic infrastructure since the late 1960s. Supporters have viewed it as a model organization that effectively reaches a tough and troubled group of street children and have praised its pragmatic approach, entrepreneurial edge, reliance on private-sector funding, and spirit of volunteerism. Critics have claimed that it rose from very humble beginnings to its current status as a $120 million-per-year charity by making, in the words of one former New York Post reporter, “Faustian bargains with corporate benefactors,” relying on semi-erotic fundraising letters and engaging in managerial practices that ultimately produced sexual and financial scandal. History, however, reveals a more complex reality.

Covenant House traces its origins to the mid-1960s and Manhattan College, then an all-male and traditional Catholic liberal arts institution in the Riverdale section of The Bronx. The Reverend Bruce Ritter, a Franciscan priest who taught theology and administered the Christian Life Council at the college, inaugurated the ministry as an outgrowth of his social commitments. Father Bruce had been a popular figure on campus since his arrival in 1963. He encouraged students to work in Catholic anti-poverty programs, fostered lively debates about the Vietnam War, and enthusiastically introduced the liturgical reforms associated with the Second Vatican Council into his ministry.

By 1968, however, Ritter had grown tired of campus life. He decided to resign his tenured professorship and begin what he characterized as a “ministry of availability” in New York City’s East Village. He convinced several devoted former students from Manhattan College, a few Franciscans and members of other religious communities, an assortment of friends and relatives, some aspiring social workers, and a number of casual acquaintances to move with him into a tenement on East Seventh Street near Avenue D in one of Manhattan’s worst slum districts. Thus began an idealistic crusade with the simple goal of serving the poor.

Desperate Circumstances
In the late 1960s, the East Village was crime-infested, drug-ridden, and in deep decline. The Village Voice observed that the neighborhood had “the bleak air of postwar Europe or industrial Manchester… .” Rather than hosting a thriving hippie counterculture, the East Village appeared to be attracting children who were running away from desperate circumstances like broken homes and abusive domestic situations. Ritter and his loyal cadre of volunteers sought to protect these youths from the dangerous aspects of East Village street life by providing them with basic food and shelter at night in a safe and supervised environment.

Homeless youths became the nearly exclusive focus of Ritter’s efforts in the early 1970s, and dominated the work thereafter. White runaways from the suburbs initially composed a significant percentage of this group, but East Seventh Street volunteers soon noticed another growing population of street children, whom they characterized as African American and Spanish-speaking, and more than a few suffered from serious addictions. No existing public or private agencies appeared to address their specific problems.

In 1972, Ritter received a small municipal grant and formally incorporated his ministry as Covenant House. Its programs expanded as Ritter acquired property and opened additional homes throughout Greenwich Village and on Staten Island. The fledgling organization began to operate what Ritter called “a small but classy group home operation,” based on the principal of open intake.

An Urban Gomorrah
By the late 1970s, however, Ritter had shifted his focus yet again and set his sights on opening a much larger shelter for homeless youths in an even more notorious New York City neighborhood. Times Square had long enjoyed a reputation as an urban Gomorrah, a sexual circus overrun by hookers, pimps, and junkies and dominated by disreputable entertainment, commercialized sex, and sleazy underground pleasures. A stretch of nearby Eighth Avenue even became known as the “Minnesota Strip,” owing to the supposed national pipeline established by pimps to recruit thousands of young blonde, blue-eyed, Midwestern prostitutes to New York City.

Growth occurred at a dizzying pace during the 1980s. By the end of the decade, Covenant House’s annual budget was nearly $90 million. Its expenditures exceeded federal appropriations for runaway children, with over ninety percent of its contributions emanating from private sources such as wealthy Catholic philanthropists and major corporations. Its direct mail program became a model for non-profits everywhere. It opened twelve more programs for homeless youths throughout Canada, the United States, and Latin America. A professional staff coalesced, more sophisticated programs expanded the offerings beyond mere crisis care, and the ministry appeared to be an unqualified success story.

Throughout, Father Bruce Ritter served as the organization’s charismatic leader, attracting universal praise and personifying Covenant House for its supporters and advocates. Even Ronald Reagan praised him as one of America’s “unsung heroes” in the 1984 State of the Union address. Ritter appeared to be carrying his religious commitment out of the pulpit and onto the streets in the best tradition of Catholic social reformers. But matters soon took a surprising turn.

From Success to Stunning Fall
In 1990, Ritter’s image and philosophy were compromised when a series of sexual and financial allegations surfaced, and his entire ministry suddenly seemed ready to collapse. A young male prostitute who resided at Covenant House charged that Ritter had provided him with money, an apartment on Eighth Avenue, and a no-show job in exchange for sexual favors. Shortly thereafter, two more former shelter residents alleged that they had also engaged in sexual relations with Ritter. Investigative reporters began to unearth other allegations that ranged from sexual abuse to financial improprieties to identity theft to official misconduct to administrative incompetence. Both the Manhattan district attorney and the New York State attorney general launched probes into the charity, and throughout the year sensational revelations dominated New York City tabloids and news broadcasts. Within a few months, Ritter was forced to resign under pressure from his Franciscan superiors, the Covenant House board of directors, donors, and civil authorities. Yet he continued to deny the allegations against him, refused to enter a counseling program prescribed by the Franciscans, and spent the remainder of his life in seclusion at a farmhouse near Cooperstown until his death in 1999.

Meanwhile, Covenant House struggled to survive. Contributions declined by $22 million in one year, its debt skyrocketed, and public confidence dissipated. Neutral observers questioned whether the organization had lost its moral compass. The board of directors had responded initially by commissioning a full-scale review of operations by a respected and independent investigative firm, Kroll Associates—but the final report criticized the board for failing to monitor institutional affairs, documented questionable financial dealings by some directors and corporate officers, and concluded that “the cumulative evidence that Father Ritter engaged in sexual activities with certain residents and made sexual advances toward [volunteers] is extensive.” Though no individual allegation could be proved without question, the Kroll report asserted that “if Father Ritter had not resigned… termination of the relationship between him and Covenant House would have been required. [He] exercised unacceptably poor judgment in his relations with certain residents.”

The report actually constituted the first step toward institutional recovery. City and state authorities elected to drop their investigations of Ritter and Covenant House without pursuing any indictments. The Child Welfare Board independently reviewed the charity’s programs, characterizing its operations as a “generally well-conceived and appropriately structured response to the needs of homeless youth.” The Council of Better Business Bureaus and the National Charities Information Bureau restored Covenant House to their approved lists in early 1992. The board of directors thoroughly reformed its operations during the 1990s, reaching out to social work professionals and adopting administrative practices more in conformity with accepted non-profit standards.

Recovery Progresses
The board also selected Sister Mary Rose McGready, D.C. as the charity’s new president. Her long experience in social service administration with the Daughters of Charity and the Diocese of Brooklyn proved critical in transforming Covenant House. She devoted more attention to early intervention, vocational training, and aftercare programs, downplayed the sensational emphasis on prostitution and sexuality, rebuilt the donor base by personal appeals and appearances, and sought to diversify the charity’s revenue stream. Sister Mary Rose also intentionally cultivated her image as a “no-nonsense nun” and crafted a public persona that contrasted dramatically with that of Bruce Ritter: “I am very aware that I am a symbol. And I use that as much as I can…I also think that the fact that I was a woman and a nun in a habit helped to restore the image of Covenant House.”

By the late 1990s, the charity had recovered from its crisis, though the scars remained visible. The debt disappeared, fundraising stabilized, and new programs opened in venues ranging from Washington, D.C. to Oakland, California. Revitalized and healthy, Covenant House operates today nationally and internationally, with programs in twenty-one cities. It continues to make a difference in the lives of many desperate teenagers. But it has dramatically shifted its rhetoric and altered its philosophy from the days when Father Bruce Ritter railed against pimps and peep shows in Times Square.