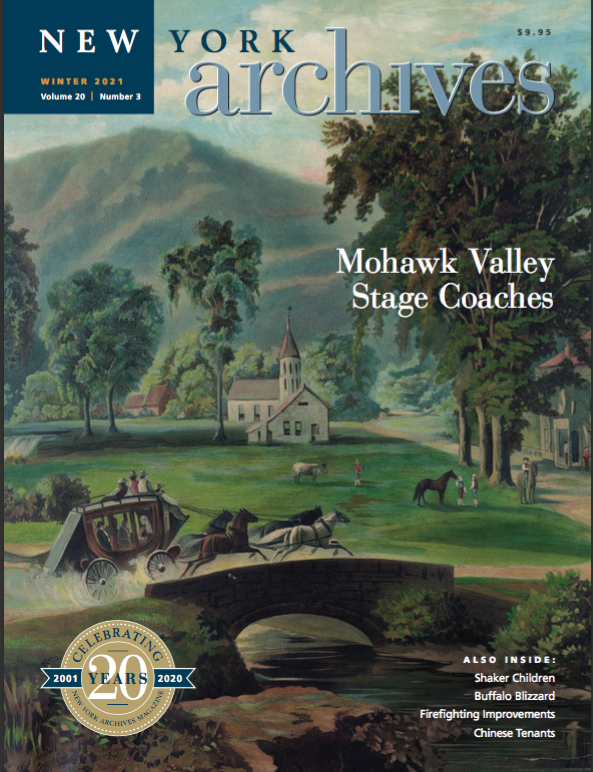 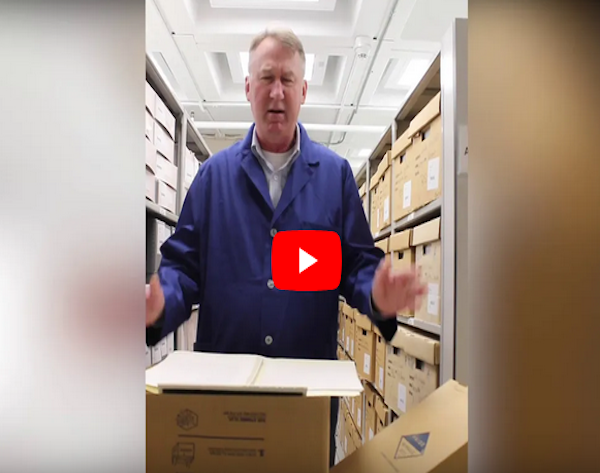 From the State Archivist
Tom Ruller
What is inside the cornerstone of the South Mall of the Empire State Plaza? Watch this video to find out.

The Caregivers
Ann Sayers
The celibate Shakers took in children who were orphaned or whose parents could no longer care for them—all seeking security within the Shaker world.

Fighting Fires
Rick Reynolds
Ballston Spa was one of many small communities that reevaluated their approach to firefighting in the early twentieth century after a devastating fire.

We Won’t Move
Shouyue Zhang
In the 1960s, Manhattan’s Chinatown suffered from both racism and a housing shortage. In the 1970s, Chinese Americans undertook the first Chinese tenants’ struggle in the city’s history. 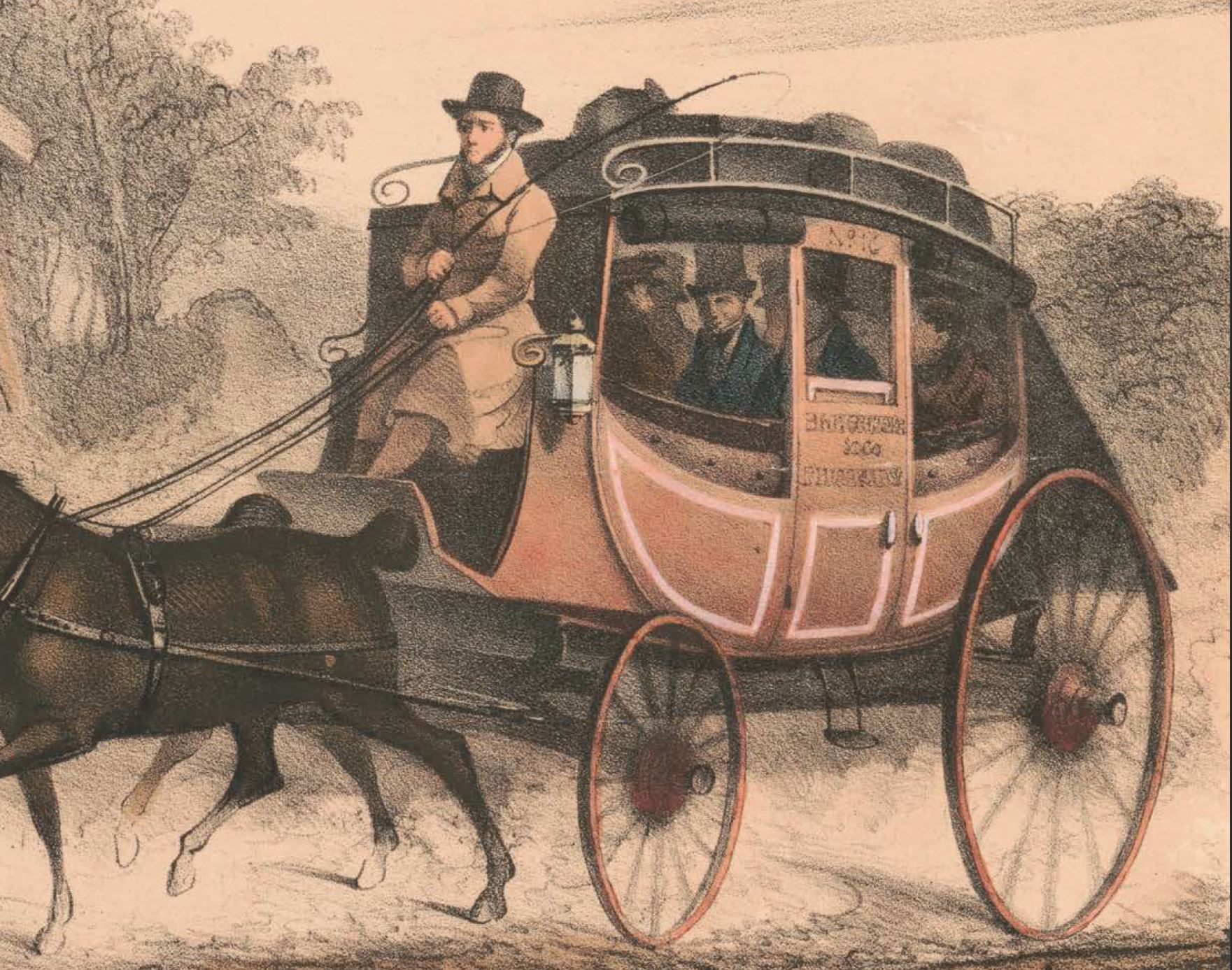 "With Energy and Success"

Hearing the word “stagecoach” can conjure up visions of a mad dash across an open desert between a racing coach and masked desperados with guns blazing. In Upstate New York, the scene was far more likely to be that same stagecoach filled with bored passengers pulling up to a rural tavern and the driver tossing a mailbag filled with letters and newspapers to the waiting postmaster.

By 1815, Aaron Thorp, Asa Sprague, and Thomas Powell were running a daily line of stages between Albany and Utica, and a year later added another stage, making the trip three days a week. In early 1825, Thomas Powell published an announcement in the Schenectady Cabinet  that due to ill health he was passing the control of his line of stages to his son, William H. Powell, and colleague Aaron Thorp. Later that year, the 55-year-old Powell passed away and the business was renamed Powell & Thorp’s Mail Stage. By 1828, it changed again, this time to Thorp & Sprague, a name under which it would continue to operate until its closing in 1838.

Jason Parker, J. Wetmore, and Isaac Sherwood, the proprietors of the stage line west of Utica banded together with Thorp & Sprague on the eastern end to maintain exclusive control of the passenger transportation over this great line of travel. This loose partnership was often referred to as the “Western Mail Stages.” The agreement that bound these separate owners was detailed when some of the parties brought a lawsuit against the others to recover what they thought was withheld income. During the court case, it was revealed that each individual stage line owner would run the line between certain sections along the north side of the Mohawk River between Albany, Utica, and beyond as far as Buffalo as separate and distinct business interests. Each party was to provide and maintain his own horses and carriages, absorbing in his business any losses. The only shared expense agreed to among the parties was for any extra carriages that were needed to carry passengers across sections of the route.

Three Accommodations
Over the whole length of this cooperative line of stage travel, there were three types of coach accommodations: the daily mail stage, with room available for passengers; a coach called the “Eclipse,” for passengers wanting to be dropped off locally; and the fastest, the “Telegraph,” an express, going between Albany and Buffalo in fifty-three hours. To assure swift travel for the express these regulations were posted.

A Sprague & Thorpe waybill from the stage line’s account book held in the archives of the Schenectady Historical Society, which included the list of passengers and fares, shows that the price for traveling with Thorp & Sprague on the eastern portion of the line was $4.50 for the express Telegraph between Albany and Utica, and fifty cents less for the slower Eclipse.

If there were more travelers than could be accommodated by the regular stage, additional coaches would be added, with sometimes three or four of these “extras” following the regular stage. For those who would want a stagecoach for themselves or their group alone, an “exclusive extra” could be obtained by paying a fee, usually equal to that of seven passengers.

The stagecoach business in the Mohawk Valley was a financial success for the owners. Not only were there the fares for passengers traveling on the line between Albany and Utica, but there was also the yearly reimbursement from the contract for carrying mail.

Comfort, Speed, or Safety
Public transportation through the Mohawk Valley in the early 1800s was a choice between comfort, speed, and safety. The Erie Canal packet boat was the slower, safer choice and the travel was less bumpy, but when travel time was important the stagecoach easily won out. Occasionally, this gain could be offset if there was a problem with the horses that pulled the coach, the stagecoach itself, or the condition of the road that they traveled on. On a trip through the Mohawk Valley in 1819, Englishman John Duncan experienced breakdowns on several occasions. Not fifty miles from Albany, one of the leather straps that supported the body of the carriage broke. A nearby fence rail was selected by the driver and, with help from the passengers, it was wedged in place between the front and rear axle as a temporary replacement until the coach was replaced at the next stop. Not too many miles later, another mishap occurred during Duncan’s trip: “While struggling up a very steep hill, our carriage descended into a gap with so violent a shock, that the bolt or pivot on which the front axle turned snapped in two, and the horses had nearly dragged the front wheels from under the body of the wagon. Our driver, however, was happily provided with a spare bolt, the passengers got out, a stout rail from the nearest fence was thrust under the carriage, and up to the ankles in mud, part on each side, we managed by dint of strength to sustain the wagon until the axle was replaced in its proper position, and the new bolt inserted.”

This same problem happened again later in the trip, but the travelers were unfazed, with Duncan only commenting, “We had learned the remedy for such mishaps, and soon applied ourselves to the work with energy and success.”

When the first rails on the Mohawk and Hudson Railroad were laid in the summer of 1830, the end of stage travel between Albany and Utica was not far behind. It was just a year later that the steam locomotive Dewitt Clinton made its maiden trip between Albany and Schenectady, opening a new era in transportation across New York State. Ironically, the first railroad cars were modified stagecoach bodies built by Albany carriage maker James Goold, a symbolic tribute to the mode of travel that was being pushed into the past.

At first, travel on this railway still required a ride on a stagecoach provided by Thorp & Sprague, as the end of the railroad line at both Albany and Schenectady was then at the outskirts of each city. In 1833, Thorp & Sprague’s Telegraph express line changed its starting point to Schenectady, with passengers being directed to take the railroad from Albany. In late 1833, they changed the name of their stage office in Albany to Thorp & Sprague’s Rail Road and General Stage and began selling tickets for the railroad. An advertisement in 1836 offers only stage travel heading east toward Worcester, Massachusetts, with tickets available at the Thorp & Sprague stage office in Albany, and detailed information about making connections to the many railroad lines that were by then crisscrossing the region.

While the stage lines could not compete with the lower cost and faster railroads, until the age of gas-powered transportation, they held a vital place by carrying mail and passengers from the railroad stops into the surrounding countryside.

One example was the twice a week stage line that had been established in 1828 between Fonda and Johnstown that increased to twice a day after the Utica and Schenectady railroad had been completed in 1836.

Despite what passengers gained in speed and convenience on the rails, they lost much in opportunities to experience closeup the sights and sounds of the Mohawk Valley country-side. British journalist Harriet Martineau, who passed through the Mohawk Valley via stage in 1836, described the bucolic scenes: “In a shallow reach of the river there was a line of cows wading through, to busy themselves in the luxuriant pasture of the islands in the midst of the Mohawk. In a deep part, the chain ferry-boat slowly conveyed the passengers across. The soil of the valley is remarkably rich, and the trees and verdure unusually fine. The hanging oak-woods of the ridge were beautiful and the knolls, tilled or untilled; and the little waterfalls trick-ling or leaping down, to join the rush-ing river. Little knots of houses were clustered about the locks and bridges of the canal, and here and there a village, with its white church conspicuous, spread away into the middle of the narrow valley.” The railroad eventually made the stagecoach and the enjoyment of scenes like this obsolete in the Mohawk Valley.