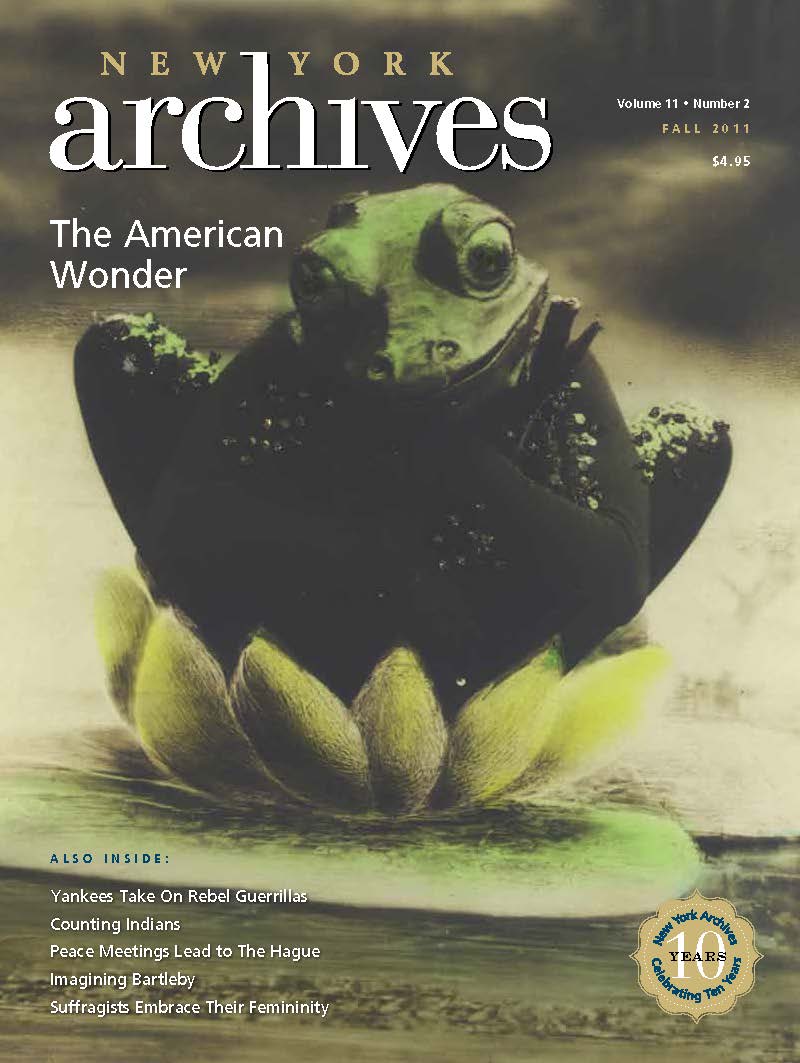 Sparring with Mosby’s Guerrillas
Joseph D. Collyea
The Fifth New York and the First Vermont Cavalries were given challenging orders during the thick of the Civil War: go head-to-head with Confederate guerrillas in Virginia.

The Iroquois Count of 1845
Laurence M. Hauptman
Contemporary historians can thank Henry Rowe Schoolcraft for his unique census of New York’s Six Nations. But some of the Indians didn’t.

The Frog Lady and the Devil

Some of the many interesting historical artifacts in the New York State Museum’s Popular Entertainment collection document the lives and careers of Friede and Harry DeMarlo, two celebrated contortionists and trapeze artists who performed in circuses and on vaudeville circuits around the world from the 1910s through the 1930s. They are credited by circus historians as creating several new contortion and aerial acts. The Museum holds these items because Friede and Harry retired from performing in the 1940s to live in upstate New York.

Friede Gobsch was born in 1890 in Germany and became interested in show business as a teenager. During her early career, she performed with an all-girl Hungarian dance troupe that toured Europe and Asia. In 1910, while on an extended engagement in Copenhagen, Friede met West Virginian Harry DeMarlo (born in 1882), an aerial contortionist who was billed as “DeMarlo the American Wonder” and who had been performing with the Barnum and Bailey Circus in the United States and Europe since he was six years old. Harry, whose real name was James Dwight Morrow, pursued Friede, much to the disappointment of the other girls in the dance troupe.

The Big Time
Friede resigned from the troupe to follow Harry, who was under contract to the Circus Schumann, considered to be the best Danish circus for most of the twentieth century. Friede became restless watching him and the others perform and begged Harry to teach her contortion skills. Because of her age—twenty one at the time—getting limber enough to work as a contortionist was difficult. But she was determined. In her unpublished memoir, Farewell to Glitter, Sawdust, and the World, Friede wrote, “Contortion is a hard thing to tackle when one is over twenty. I began to practice each morning stretching and limbering up in earnest on the stage.” Her perseverance paid off, and soon she was performing between Harry’s acts to give him a rest. Within a short time, they were being billed as “DeMarlo and Partner.” Their marriage in 1911 also gave Friede American citizenship.

Harry and Friede hit the big time in 1912 with an act they called “Frog’s Paradise.” The stage set was a woodland scene with leaves, trees, a full moon, and worms and bugs lit by tiny light bulbs. In the center, Friede, dressed as a frog, emerged from a giant water lily and began dancing and bending about the stage. Music then identified a storm approaching, and Harry appeared onstage as another frog who contorted his body in a variety of poses. After the storm passed, Friede morphed into a nymph, with more dancing and bending about the stage. For the next five years, the couple performed “Frog’s Paradise” nearly worldwide; some dignitaries in their audiences included the King of Siam, the Queen of Holland, and the Czar of Russia.

The DeMarlos were under contract to several different vaudeville circuits and circuses in Australia, Japan, India, South Africa, and across Europe; thus they performed year-round. They joked that they “crossed the ocean so many times even the porpoises know [our] names.” Harry was also a body-double for the actor John Barrymore in some of his early silent films for acrobatic shots and fencing. For several seasons in the 1920s the couple performed for the Barnum and Bailey Circus, and then the combined Ringling Brothers and Barnum and Bailey Circus (the Ringling Brothers purchased the Barnum and Bailey Circus in 1907, but ran the circuses separately until 1919, when the two were merged.) The circus season ran through spring, summer, and fall; in the winter, the DeMarlos signed on to smaller circuses, such as Shipp and Feltus, which toured Central and South America, and the Santos and Artigas Grand Circus, which toured Cuba and other vaudeville circuits.

Astonishing Acts
While “Frog’s Paradise” was their major act, the DeMarlos continued to develop new material. Harry perfected an act called “Devil on the Trapeze,” in which he performed contortions high over the audience while dressed in a devil costume. Friede, who adopted the stage name La Marletta, perfected an act titled “Symphony in the Air,” which became a headliner for the Ringling Brothers Circus. She would contort her body into a small box that hung directly over the audience— who, not knowing what was in the box, would suddenly hear an operatic aria being sung. During the aria, Friede would gracefully drop out of the box by her ankle, which was attached to a sling, while she continued singing and performing contortions.

In 1924, Friede developed a new act with the same determination she used to make her body limber. This was called a “teeth act,” whereby a leather strap that bore her complete dental imprint was attached to an aerial rope, allowing her to hang suspended from only her teeth. But to perform this act at all, she first had to start developing her jaw muscles. She wrote in her memoir, “I broke it [the mouthpiece] in slowly, holding the contraption firmly in my jaws. It hurt tremendously. The pulling of the sinuses, the muscles, it was downright killing. I wasn’t a [spring] chicken anymore, thirty-four by now, although I looked like twenty.”

After weeks of strengthening her jaw, Friede told Harry she was ready to begin. After more weeks of simply hanging suspended by her teeth, she developed the next part of the act: she bent both legs behind her neck and, as the rope she was tied to swiftly uncoiled, she began to spin around. She practiced this until she was ready for the next step, which was installation of an electric motor that would turn the rope faster. The circus electrician built Friede exactly what she wanted: a 110-volt motor with a regulator encased in a tiny golden container that would speed the rope’s—and Friede’s—rotation.

First, Friede was lifted up by the rope about fifty-five feet in the air. The spinning then started gradually, until the motor spun her at full speed for two whole minutes while she performed her contortions. The greatest danger was at the end, when the electric power was shut off: her mouthpiece was also twisting, and a too-abrupt end to the spinning could cause the mouthpiece to jolt out of her mouth. This was also the time when she had to have the strongest grip on the mouthpiece with her jaws.

Friede worked on the act (which she named “Whirl of Death”) for months, mostly to get over being dizzy. During the 1925 circus season, “Whirl of Death” was booked as a major attraction.

Rave Reviews—Then Disaster
Two years later, Harry and Friede were chosen for a five week winter engagement at the London Olympia Circus: Harry would perform “Devil on the Trapeze,” and Friede would perform “Whirl of Death.” Friede’s contract, at $375 dollars a week, included second-class fares to and from London and was the most money she had ever made. All the attention made her push the envelope. She began to think about increasing the amount of electricity to the motor, doubling it to 220 volts in an effort to spin even faster. The London Olympia also had the highest ceiling in which either of them had ever performed—Friede at 100 feet, Harry at eighty feet.

All over the city, giant posters urged audiences to “Come see the beautiful La Marletta at the Olympia.” Both Friede and Harry’s opening performances gathered rave reviews. They even performed for the British royalty. One review said, “De Marlo’s marvelous contortions caused gasps of amazement…and then audience grows dizzy watching Mlle. DeMarlo correctly described as the human top.”

But four days before their closing date, disaster struck. As Friede was completing “Whirl of Death” and spinning (via 220 volts of electricity) 100 feet in the air, when the electricity was shut off her jaw finally gave out and she plummeted to the ground. The London News reported, “La Marletta, The Human Top, Crashes To The Ground At The London Olympia… taken to the West London Hospital at Hammer Schmidt Crossing. Fearful accident. Women in audience screamed in panic and a great number fainted away, many others hurried out.”

Friede’s spine was badly bruised, her ankle was broken, and her upper teeth moved back and forth. She was hospitalized for five weeks. She made the doctors reset her ankle three times because she refused to have any sort of limp. After a few months of recuperation, she went back to working on her act and was able to perfect it again, although she no longer used an electric motor, simply using the uncoiling rope for speed.

Long Careers, Long Lives
Harry and Friede toured Russia, Europe, and Africa for the next few years and returned to the Ringling Brothers Circus for the 1932–33 season. After that, they played state fairs for the Wirth and Hamid Circus and performed in smaller indoor circuses across the country and in Europe. In 1936, they decided not to tour with Ringling Brothers anymore because their friend, John Ringling, the founder, had passed away that year. In 1937, the couple started playing nightclubs across the United States, including Buffalo and Rochester—two shows a night, one at 9 p.m. and the other at midnight. Friede commented on their new venue: “This whole thing was new to us. This was no theater, no circus. It seemed funny to perform close to the patrons.”

They continued to perform for four more years until 1941, when they decided that it was finally time to retire from show business. They had no children, and Friede was fifty years old, Harry fifty eight. They bought a farm in Walton, New York (Delaware County) and settled down–– to train dogs for animal acts in circuses. Although they’d performed intense and dangerous physical acts for decades, they were both in good health and lived long lives; Harry died in 1971 at the age of eighty-nine, and Friede died in 1980 at ninety.

In an interview for a 1963 article, “Forgotten Acrobats of the Arena…” by Burns M. Kattenberg in The Circus Review, Harry reflected on his career––and on the physical demands of extreme performance. “Contortion…keeps you fit in every way,” he said. “It helps you to stay young and alert. The only way to achieve contortion stunts is by patient and constant training and nothing else.” He related how, in the Gay Nineties, bakers sold a dark brown concoction called “snake oil” under such names as “Angle Worm Oil” or “Lizard Oil” that supposedly made youthful and ambitious contortionists more limber. “[S]ometimes,” he said, “I wish such an oil would have [an] effect, because it is only by relentless practice and unending limbering that I can accomplish results.”