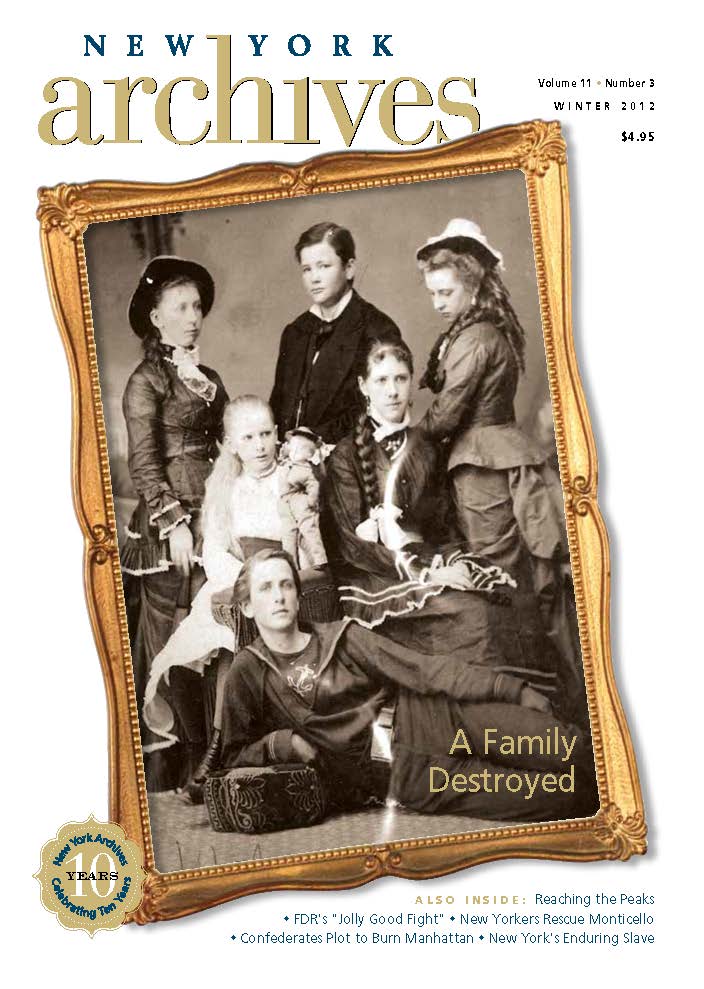 Hiking Partners, Mountain Stewards
Suzanne Lance
From three adventurers to a club of thousands, the Adirondack 46ers has grown to encompass both accomplishment and preservation.

FDR’s Fistfight
Daniel J. Demers
Did our thirty-second president-to-be really punch out two Tammany men at the 1920 Democratic Convention? Historians are divided on what happened.

Saving Monticello
Marc Leepson
If not for two members of a wealthy New York Jewish family, Thomas Jefferson’s dream house would be just that today.

A Vast and Fiendish Plot
Clint Johnson
Confederate saboteurs wanted to set New York City on fire. How easy it would have been—if only they’d been better at it.

Caesar’s Ghost
Scott Christianson
His is the face of the age of slavery. But he was also a man who lived long enough to transcend it.

At around six in the morning on June 3, 1873, a fashionably dressed middle-aged man, powerfully built despite his portly appearance, entered New York’s Sturtevant Hotel at Broadway and 29th Street and was ushered up by the bellman to see the guest in Room 267, a young man who had checked in the day before. Before the bellman even had time to get back to the lobby, he heard four shots fired in rapid succession. Moments later, the young guest came down and spoke to the hotel clerk, calmly declaring, “I have shot my father in my room, and want a policeman.” When the clerk and others rushed upstairs, they found the middle-aged visitor breathing his last on the blood-spattered floor.

The young guest was Frank Walworth, a seventeen-year old law student who lived with his mother in Saratoga Springs, New York. The victim— whom Frank had invited to his room for a discussion of family problems—was his estranged father, Mansfield Tracy Walworth, known to the public as the prolific author of a series of lurid and fantastic novels of no literary prestige but which had begun to enjoy some popular success. Mansfield’s notoriety, however, had more to do with his being the son of one of the most distinguished figures in New York State.

Notable Father, Dissolute Son
Mansfield’s father, Reuben Hyde Walworth, had for twenty years been Chancellor of New York until the post, which amounted to one-man control of the state’s system of equity law, was abolished in 1848. In the decades before the Civil War, Chancellor Walworth had been a jurist and politician of wide-ranging influence in New York, a founder of the state’s Bible and Temperance Societies, and a model of civic virtue and moral probity. From his home in Saratoga Springs, which he had transformed into his courthouse, Chancellor Walworth radiated a benevolent but unquestioned authority. By the time of his death a few years after the Civil War, he had become a symbol of a vanished era that seemed to embody surer codes of personal and public conduct.

His son, Mansfield, could not have had more promising connections. Mansfield’s elder brother, Clarence, had shocked his Presbyterian family by becoming a Roman Catholic priest, and had gone on to become a significant figure in the American Catholic hierarchy. Mansfield’s wife, Ellen, was the daughter of Colonel John J. Hardin of Kentucky, a Whig congressman who had been a political associate of Abraham Lincoln’s before dying heroically in the Mexican War. But for all these connections, Mansfield failed to find a path to eminence and respect. As a teenaged boarding school student, he had earned a reputation as a dissolute, violent bully. Despite his law degree from Harvard, he never became more than his father’s resentful clerk. His career in the Civil War consisted of being detained in Washington as a Confederate spy and sitting out the war under house arrest in Saratoga Springs.

Only in his fiction—a string of improbable melodramas that provided an outlet for grandiose fantasies of heroic suffering and ultimate world dominating triumph—did he find a degree of public success. But if the novels sold, they did not earn him the respect of the writers and intellectuals he hoped to impress. Although he managed to pass himself off in some social circles as a literary gentleman, a reviewer for Harper’s wrote of his novel Delaplaine that “if it is intended as a burlesque…it is admirable. If it is intended as a novel, it is the wildest, craziest, freakiest, maddest performance that an untrained imagination…ever put on paper.”

A Marriage Made in Hell
As for Mansfield’s marriage to Ellen Hardin, with whom he would have eight children, it started on a note of high poetic courtship but rapidly descended toward nightmare. For two decades, the couple had repeatedly separated— once, during the Civil War, for several years—as Ellen sought to distance herself from her erratic and menacing husband. Their periodic reunions became shorter as Mansfield unleashed into their domestic life a reign of terror that culminated in a series of brutal attacks—he gnawed one of Ellen’s fingers to the bone on one occasion— that ended only when she walked out on him and filed for divorce in 1871.

Even when physically separated from her, however, Mansfield found a way to continue the torment by sending a stream of obscene and blasphemous letters threatening to kill her, the children, and other family members. Mansfield’s obsessive theme in these letters was money. The chancellor, long aware of Mansfield’s drastic shortcomings, had disinherited him, leaving him only an allowance doled out by the eldest son, Clarence. The idea that Mansfield’s destiny was now in the hands of the brother he envied and the abused wife who had finally freed herself from his control seemed to drive him even deeper into the paranoid sense of personal aggrievement he nurtured for many years. And in his mind, the root of it all was his dead father: “Reuben H. Walworth always hated me from my cradle. He always hated any one who was high-spirited and would speak out their thoughts.” The vengeance with which he threatened his children in his letters was ultimately directed toward his own father: “I will kill your boys,” he wrote to Ellen, “and defeat the damned scoundrel in his grave and cut off his damned name forever.”

Patricide
It was the letters, son Frank said, that drove him to take action. He had intended, he told police, to exact from Mansfield a promise to stop harassing Ellen and his brothers and sisters, and had only fired his weapon when he saw his father reaching into his coat as if for a gun—a claim that made little impact, especially since Mansfield turned out to be unarmed. In any case, Frank felt he had done the right and noble thing in defense of his mother, and expected public acclaim for his act. Instead the city papers portrayed him as an arrogant aristocrat whose emotional detachment was frightening. His youth made him an object of horror to some: “The coolness and deliberation,” wrote the New York Herald, “displayed by the youthful parricide…reveal a depth of depravity that we shudder to contemplate,” while according to the Evening Post, “[m]odern society has produced a monster.” However, in Saratoga, where the facts of Mansfield and Ellen’s marriage were better known, Frank was largely seen as having acted in understandable temporary madness against the brute who had sworn to kill his mother.

The two-week trial that followed only a few weeks later was brief but intensely dramatic, and turned around at its midpoint when Frank’s lawyer, Charles O’Conor, a veteran attorney known for his displays of courtroom theatrics, was granted the right to read aloud Mansfield’s letters to his wife—not just a few excerpts, but hours and hours of letters read in full, with all the shocking intemperance of their language washing over the jury. The New York Times, which had displayed no sympathy for Frank’s case, devoted an editorial, titled “Idiocy as a Profession,” to the effect of these letters, describing Mansfield as “the most successful and incontestable idiot of the age.” The revelation of his father’s personality probably saved Frank’s life, although it did not spare him conviction on July 5, 1873 or incarceration, first at Sing Sing and ultimately in the asylum for the criminally insane at Auburn.

A Family Torn Apart
The fact that he finally became a free man again is another story—about his mother, Ellen Hardin Walworth. After the years of marital torment, Ellen recovered and finally achieved wide public recognition as an educator, a historian, and a founder of the Daughters of the American Revolution. Her energetic campaign to get her son released drew on all the political connections available to her through her family ties as both a Hardin and a Walworth. She was not interested in exonerating Frank in the court of public opinion, but rather among those powerful enough to make a difference. She succeeded in1877, when Governor Lucius Robinson issued Frank a pardon, citing as justification a summing-up by the poet William Cullen Bryant: “The meeting between the father and the son would be regarded as an encounter between two insane persons, in which one of them was slain.”

But depression, mania, suicide, and early death tracked the rest of her offspring. If Frank’s crime was largely forgotten by the public, none of his siblings ever got out from under its shadow. As for Ellen, she soldiered on through one personal catastrophe after another, while continuing to amass civic honors and acclaim. In a late journal she wrote, “I cannot work. I cannot think— there is only the intense desire to get through with what is necessary—and to lie down and die.” But her sense of personal discipline overrode the calamities, in a final affirmation of the values she believed had been entrusted to her by her father, Colonel John J. Hardin, and her father-in-law, Chancellor Reuben Hyde Walworth.

The Walworth family residence in Saratoga Springs, which the chancellor purchased in 1825 and which Ellen expanded into a fifty-five-room boarding school, became the home of the last direct descendant of Mansfield and Ellen: Frank’s daughter, Clara, born just before her father’s untimely death, lived there alone until the early 1950s. After her death, the dilapidated house was razed to make way for a gas station.

The Walworths hoped that their accomplishments would earn them a place in the American record. Nearly all of them wrote: the chancellor his orations, legal judgments, and epic genealogies; Clarence his sermons and memoirs of his early religious life; Ellen her historical and patriotic articles and, more revealingly, her extensive journals and diaries; Frank his poems, written during his years of confinement; and Mansfield the mad outpourings of his novels and his cruel, frightening letters. Because so much of this writing has been preserved, we can get a sense of both how they wished to be seen by the world and how the world seemed to them. In the end, the glorious chronicle they wanted to leave behind was essentially forgotten, and they may be best remembered for the strain of mania and uncontrollable violence that finally tore their world apart.