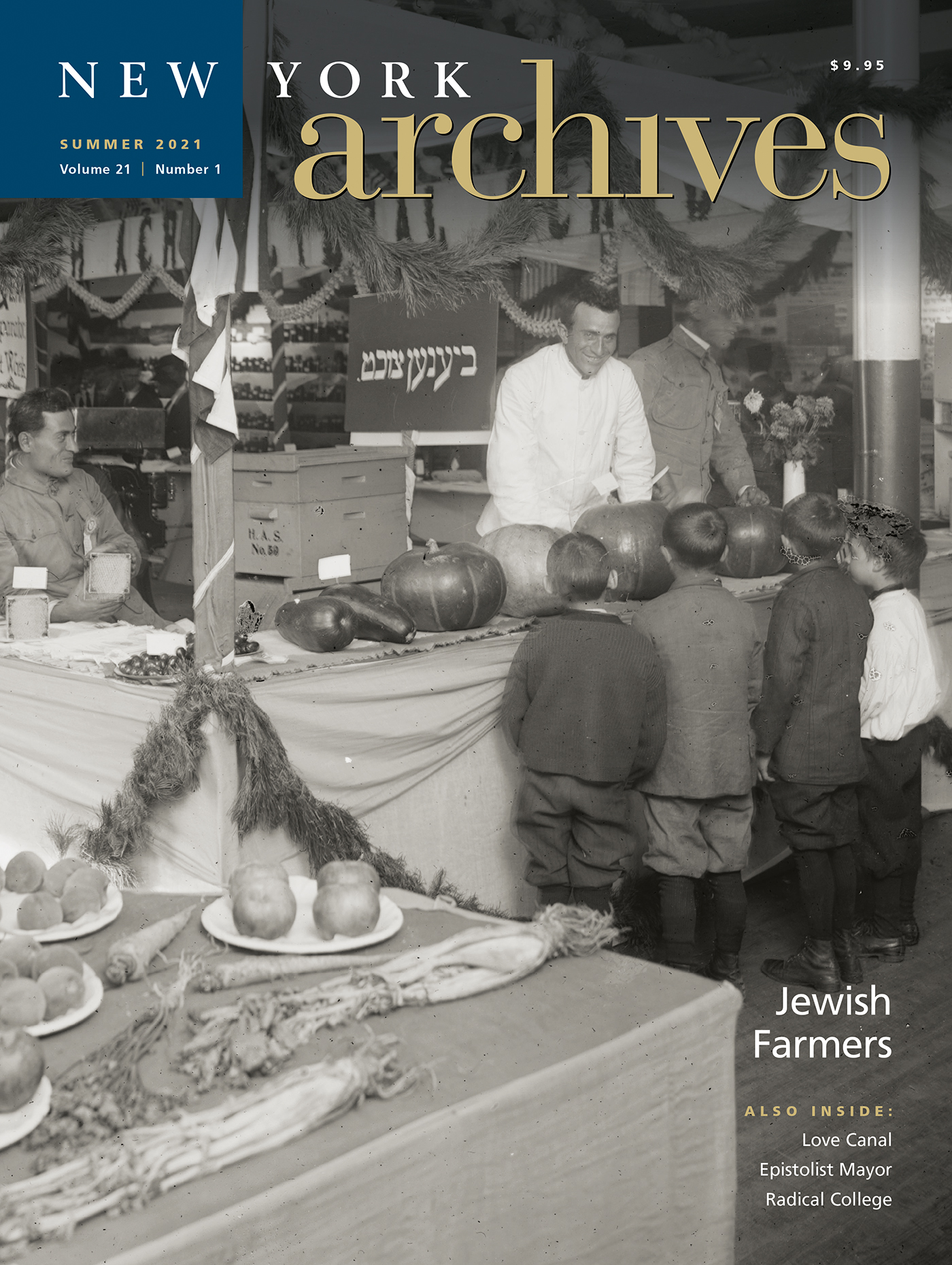 Planting Seeds
Harvey Strum
Rensselaer County became a hub for Jewish farmers who fled persecution due to their faith.

The Beacon on the Hill
Sharon Stevans
The village of McGraw in Central New York became the location for a radical higher education experiment. 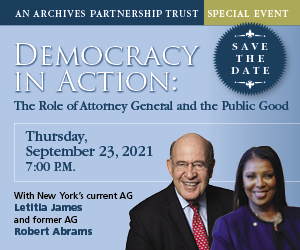 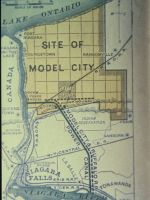 Love Canal was a neighborhood in the city of Niagara Falls named for William T. Love, a late nineteenth century entrepreneur. Love devised a plan for a model community including the creation of factories and the construction of a canal. The water flowing through the canal would be used by those factories to generate their own electricity, a standard practice at the time. But once George Westinghouse and others solved the the problem of transmitting electricity over significant distances, there was no longer a need for a local power source and on-site generation. The planned community was abandoned.

Hooker Chemical and Plastics Corporation eventually purchased the canal, converting it and the surrounding area into a sixteen-acre landfill. The canal was drained and the company began using it to bury fifty-five-gallon metal and, in some cases, fiber barrels filled with chemical waste left over from the local manufacture of dyes, perfumes, and solvents for rubber and synthetic resins. Some of the deadly substances in those barrels included benzene, chloroform, toluene, dioxin, various kinds of PCBs, and pesticide residues. Between 1942 and 1953, Hooker dumped more than forty million pounds of hazardous waste, burying it in close proximity to what would later become the thirty-five-block neighborhood known as Love Canal.

In 1952, representatives of the Niagara School Board approached Hooker with an offer to purchase the Love Canal As internal memos drafted by Hooker board members would later reveal, the company agreed to sell the property because its board recognized the danger of the toxic dump. Disposing of this property would, some argued, shield the company from the responsibility of future problems that might arise. The deal was approved and Hooker turned the property over to the school board for a dollar, with the stipulation that it would not be held responsible for future claims or damages resulting from the underground storage of chemicals.

Canal Covered
The canal was subsequently covered with a thin layer of clay and topsoil. Freshly planted grass belied the dangers lurking below. Over the next twenty years, the school board gradually sold off pieces of the property to housing developers. A total of 900 homes and two public schools were eventually built in dangerous proximity to what had formerly been a huge, noxious dumpsite. Unsuspecting residents went about the ordinary activity of their daily lives. Love Canal seemed to be a safe, peaceful neighborhood, and an ideal place to raise children.

However, there were periodic reminders of the past. Over the years, residents complained of foul odors and of a mysterious black sludge that oozed from cracks in the asphalt that covered the school playground and sometimes even bubbled up in their backyards. Vapors associated with more than eighty chemicals emanated from Love Canal.

Dangerous Chemicals
The first alarm was sounded in 1976 with an article in the Niagara Gazette written by two reporters who had arranged to have some of the sump pumps near the former canal tested for toxins. The results revealed that the pumps were loaded with dangerous chemicals.

The following year, another reporter wrote about an informal door-to-door survey he had conducted with residents of Love Canal. The disturbing results indicated an inordinate number of people in the neighborhood seemed to have a variety of troubling health problems.

This second article, which emphasized the fact that  a public school had been built directly over a toxic dumpsite, confirmed some of Lois Gibbs’ worst fears. Gibbs, a twenty-seven-year-old housewife and mother of three children, had long suspected that the pediatricians who examined her five-year-old son Michael were overlooking obvious external causes for his chronic ill health. He suffered from epilepsy, as well as from urinary tract and respiratory problems. Convinced now it was the chemicals buried beneath the school Michael attended that were making him sick, Gibbs went to the school board and demanded that they move her son to another school. The board refused.

Gibbs decided to knock on doors and conduct her own survey to find out if there were others in the neighborhood with persistent health problems. She learned that an unusually high number of neighborhood residents were suffering from liver disease, epilepsy, and asthma. Children who walked barefoot outdoors developed strange rashes on their feet, a significant number were prone to seizures, and some had died.

Convinced that something urgently needed to be done, Gibbs founded, and was elected president of, the Love Canal Homeowner’s Association. Under her leadership, members worked tirelessly to document the health problems that they were increasingly convinced stemmed from exposure to hazardous chemicals. They discovered that the number of Love Canal residents suffering from a variety of cancers was inordinately high.

The Love Canal Homeowner’s Association began demanding answers of public officials. Ignored at first and then ridiculed and dismissed, Gibbs and others made it clear they were not going away.

Abused Victims
During my 1978 campaign for attorney general, based upon briefings and background papers, it was clear to me that, if elected, a good deal of my time and effort was going to have to be directed toward doing something for the abused victims of this community.

Hooker was at the top of a long list of dumpers and polluters who would have to pay for the damage they had already done, and, in some cases, continued to do.

Governors have to be careful when it comes to confronting corporations because those companies maintain a leverage which they do not hesitate to use. Asked to take responsibility for their actions, corporations can always threaten to relocate to a friendlier, less litigious state, taking thousands of jobs with them. A governor might be reluctant, even if well advised, to call the corporation’s bluff. My job as attorney general, however, was to enforce the law. I was the lawyer for all the people of New York, and I believed it was my responsibility to act in the public interest whenever I could. Since ordinary citizens didn’t have the power or resources to stand up to powerful interests, it was my obligation to fight for them.

Since there wasn’t yet a specific law to deal with this kind of phenomenon—the dumping of toxic chemicals into the ground—we used an ancient legal theory of public nuisance. It goes back hundreds of years to English common law. Basically, it asserts that if you create a public nuisance, you can be required to take action to fix the problem and pay for the damage you created.

Ultimate Success
Our state case eventually went to the federal court after the passage of the Comprehensive Environmental Response, Compensation and Liability Act (CERCLA), commonly known as the Superfund. This law both provided funds for cleanup of toxic sites and gave us a new, strengthened statutory basis for prosecuting those responsible. Love Canal was one of the three toxic dumpsites that led Congress to adopt the law. We eventually merged our case with the Department of Justice case, obtaining the benefit of a strong alliance with the state and the federal government.

Thus began a fourteen-year process of discovery requests, productions, motions, and trials, as well as negotiations and further trials and more negotiations regarding the Love Canal site.

We ultimately succeeded in getting Occidental to clean up the toxic mess, not only at Love Canal but at its four other locations, and to radically alter its approach to the disposal of hazardous waste. This meant that it would have to take time and money to see to it that toxic waste was disposed of in a safe and responsible fashion. Occidental was also held legally responsible for monitoring those sites where it had dumped toxic waste.

Precedent Setting
Love Canal was a precedentsetting case and it made people around the country aware of the risks of toxic waste. But, sadly, it was only one case of many more to follow. Before I became attorney general, the state of New York had never sued to compel a cleanup of a toxic waste site. We ended up bringing sixty-five lawsuits compelling corporations to spend hundreds of millions of dollars to remediate these hazardous sites all around the state. Time magazine had featured the Love Canal on its cover proclaiming that it was a “ticking time bomb.” Indeed, Love Canal became a catalyst not just in New York but across the country and around the world for governmental intervention generated by citizen activism in response to the toxic peril 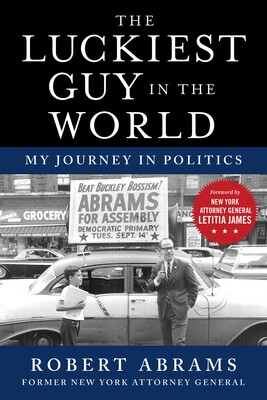 Serving four terms as New York State Attorney General (1979-1993) provided Robert Abrams exciting opportunities to utilize the unique powers of that office to improve the lives of New York State’s citizens. In his recently published memoir, The Luckiest Guy in the World, he discusses many of those efforts, such as protecting consumers, advancing the civil rights and liberties of seventeen million New Yorkers, and defending the rights of women to make reproductive choices. He also devotes a chapter to how he sought to safeguard New York’s environment from the reckless acts of individual and corporate polluters. One of his key environmental initiatives was launching the landmark lawsuit involving the cleanup of Love Canal.

State investigations of the Love Canal and ensuing litigation created voluminous records, most of them now in the State Archives. Litigation files from the Office of the Attorney General total nearly 700 cubic feet and 1,500 rolls of microfilm. The Department of Health Center for Environmental Health conducted health and habitability studies of the Love Canal neighborhood, records now coming to the Archives. Some of those records are restricted, especially privileged documents or personal health information. The Archives also holds records of the Governor’s InterAgency Force, which coordinated the state’s response to the disaster, and the Assembly Task Force on Toxic Substances, which investigated hazardous waste sites in Western New York back to World War II. Other Love Canal-related materials are in records of the Department of Environmental Conservation and in the files of Governor Hugh L. Carey.

The SUNY University at Buffalo Archives https://library.buffalo.edu/archives/lovecanal/collections/ has over 275 linear feet of materials, emphasizing the community response to the Love Canal.