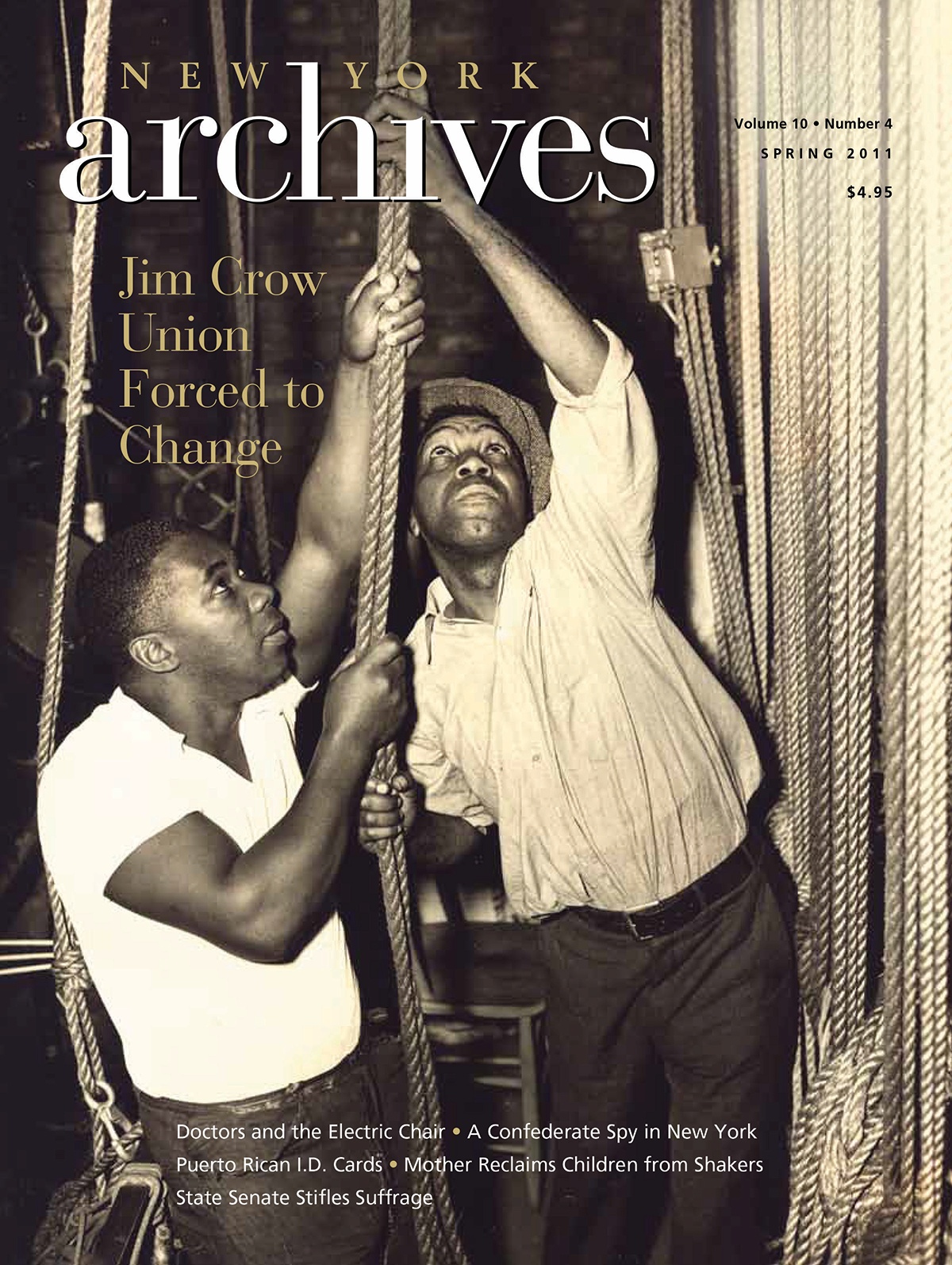 Spotlight on New York’s “Law Against Discrimination”
Brian Purnell
After World War II, passing a state law that made discrimination illegal was one thing. Enforcing it was another.

Upholding the Color Line
Lorrin Thomas
Color and complexion were not always what they seemed when it came to Puerto Rican migrants in New York City during the Depression.

The Conspirator Who Got Away
G. William Beardslee
Who killed Abraham Lincoln— or, rather, who else besides John Wilkes Booth? A provocative conspiracy theory has its locus in central New York.

Divorce Decreed
Ilyon Woo
In the early 1800s, Eunice Chapman was a mother with a cause: get her children back. How she did that stunned the state, from the legislature to the public.

Crumbs of Justice
Carol Kammen
Women’s aspirations for advancement got short shrift in the State Senate in the 1870s—especially if “suffrage” was mentioned.

Death Machine
Markus Hedrich
The electric chair was invented in the late nineteenth century by two New York psychiatrists, and the governor declared that electrical execution had “come to stay.”

In March 1945, Governor Thomas E. Dewey signed into law the Ives-Quinn B ill, which made discrimination against any New York inhabitant “because of race, creed, color or national origin” illegal. New York was the first state in the country to pass such a law, which also declared that discrimination not only harmed the victim but “menaces the institutions and foundations of a free democratic state.”

After the Ives-Quinn bill passed, people who used race, ethnicity, or religion to discriminate against New Yorkers were subject to investigation. If sufficient evidence existed, SCAD initiated prosecutions before a panel of commissioners who were empowered to either sanction or exonerate accused parties. Realtors, landlords, homeowners, labor unions, restaurants, hotels, swimming pools, and various businesses found guilty of breaking the law could be fined, and faced possible suspension or forfeiture of their licenses to practice business in New York, though SCAD was also empowered to enforce the law through “conference, conciliation, and persuasion.” Rather than using its punitive powers, SCAD commissioners often adopted a general policy of limited intervention.

This soft approach aroused strong criticism. Civil rights advocates throughout the postwar period decried the commission’s passivity; many wanted SCAD to adjudicate cases more forcefully and punish guilty parties. For the most part, historians have presented SCAD as a weak entity that never exercised the full extent of its prosecutorial powers. While these assessments of SCAD are accurate, they are also incomplete. SCAD heard scores, if not hundreds, of cases that reveal how racial and religious discrimination affected life in New York, from where people lived to where they worked to where they could enjoy recreational facilities.

A Jim Crow Labor Union
Because of closely guarded membership rolls that often remained within families, and a long history of hostility toward black workers within organized labor, unions were some of the most difficult venues in which to address widespread racial discrimination. One case that involved a Jim Crow union illustrates the measured but effective ways SCAD intervened on behalf of citizens who experienced such discrimination.

In October 1954, James Kinard and Marchand McReynolds, president and vice president, respectively, of the New York City-based Local 1A of the International Alliance of Theatrical Stage Employees (IATSE), met with SCAD Commissioner Elmer Carter to file a complaint of racial discrimination against IATSE Local 1. The union oversaw the manual labor the mechanical, stagehand, electrical, carpentry, and moving work that serviced all the theaters in The Bronx, Staten Island, and Manhattan, including the Broadway theater district and the city’s emerging television production industry. Local 1A was the nearly all black auxiliary of Local 1. In existence since 1886, Local 1 granted the auxiliary branch a charter in 1937 after black workers in Harlem organized independently as a means of stopping white outsiders from hoarding all the theater jobs.

John C. McDowell, secretary of Local 1, remembered that in the 1930s, when white workers from Local 1 went uptown to work, the black workers’ “racket labor union threatened to cut their throats. No white men can go up there. They’d kill them.” He recalled that since Local 1 “lost some of the theaters to colored [workers], we formed a local for them. We brought them in and gave them their jurisdiction.” Unaffiliated black workers conceded that as part of a city-wide union, they would be able to find employment outside of Harlem. But nearly twenty years later, Local 1A’s members were still limited to certain theaters in all-black neighborhoods.

However, during their meeting with SCAD Commissioner Carter, Kinard and McReynolds told him that Local 1 barred Local 1A’s roughly thirty members from working outside predominantly black neighborhoods; that members of Local 1A did not receive medical or pension benefits granted to members of Local 1; and that black and Puerto Rican members of Local 1A were not allowed to work in television theaters. “When a television picture of Willie Mays was being made on St. Nicholas Place near 155th Street,” they said, “the stagehands on the truck were white and were from Arkansas, holding international cards which permitted them to be affiliated into any international union.” Thus Jim Crow policies forced new black workers to join 1A. Kinard and McReynolds requested that SCAD take action against these discriminatory practices. If they had to testify at a hearing, they said, they were willing to risk losing their jobs.

Much at Stake
Since members of Local 1A wanted to dissolve the auxiliary and become members of Local 1, Carter initiated an investigation to see if that was possible and if the Jim Crow union Kinard and McReynolds described actually existed. A SCAD investigator found that Local 1’s relationship with Local 1A was not overtly hostile, but rather paternalistic. “We want to take care of them,” John McDowell told the investigator. “We never have a dinner but that they aren’t there…We have been a mother to them. We get their contracts for them. We fight the managers up there for them. We do everything we can for them.” Still, when asked why the auxiliary was called 1A, McDowell said it was “because we can’t call them 1 Black.” Of Local 1’s 1,300 members, none were black, and given the system of nepotism that guarded membership, there was very little chance that Local 1 would integrate. “Fathers wanted their sons in the union and we took them in,” McDowell explained. In 1954, Local 1 accepted roughly 100 new members, nearly all of them relatives and friends of existing members––which practically guaranteed that, without state intervention, the union would remain all white.

SCAD negotiators and Local 1 leadership had to work through several difficult issues. If Local 1 absorbed the thirty members of 1A, would they be considered new members or would their seniority carry over? Would members of 1A skip to the head of the list of over 1,000 men waiting for membership in Local 1? What about working as laborers in television studios or prestigious Broadway theaters: would black members demand those privileges? And how would the union manage white workers’ backlash and the resentment or violence that could result from this merger?

Clearly more was at stake than the fate of thirty workers. In a negotiation session with Commissioner Carter held on March 4, 1955, Vincent Jacobi, president of Local 1, expressed concern. If “we take these boys in,” he said, “they will, one by one, want to come into TV shows, legitimate theaters and so forth. I am afraid if they do there will be trouble and one of these boys may be thrown off a ladder or something like that.” Still, the Local 1 leadership insisted that the union did not discriminate against black workers, and that paternalism, not racism, described Local 1’s view of its black auxiliary. John McDowell repeated to SCAD the spurious claim that Local 1A had grown from white laborers fearing for their safety working in Harlem: “The members told us they didn’t want to work up there because they were afraid. It was then that we formed their group. We’ve been nice to them.”

A Chance to Make
Democracy––and History Carter informed Local 1 and its lawyers that niceness had nothing to do with the way Local 1 was “perpetuating a situation that is contrary to the law of this state.” Carter also emphasized how a merger of Local 1A and Local 1 would be “electric” in the labor movement. He cited the fact that ending discrimination in the Metropolitan Life Insurance Company had had similar widespread influence on other firms, not only in the insurance field but in other industries as well. If it incorporated its black auxiliary, IATSE Local 1 would become an example of labor union democracy for
the city and the country.

Carter still held out the stick of a public hearing: based on SCAD’s investigation, he indicated that he had sufficient probable cause to subpoena all of Local 1’s leadership, as well as the president and officers of the international union’s office, to appear before an official SCAD hearing. Kinard and McReynolds would testify, along with the other twenty eight members of Local 1A, to the ways IATSE operated a Jim Crow union. The hearing would undoubtedly cause negative press and public embarrassment and cost the union a great deal in legal fees. Thus Carter implored the union officials to be “statesmen” and to correct the situation on their own.

“Full Membership”
In the end, the case did not go to a public hearing. The IATSE leadership dissolved Local 1A and incorporated its members into Local 1, and in late June 1955, SCAD announced that “Negro stagehands, in an action shattering decades of tradition in the theatrical industry, have been admitted for the first time to full membership in the Theatrical Protective Union No. 1, IATSE, AFL.” Through this agreement, Commissioner Carter celebrated that “the Negro will be enabled to play a full role in an industry where he has always played a great part,” and that “the steps taken by labor to eliminate both constitutional and practical discriminatory bars in unions constitute one of the most significant trends in the past decade of the trade union movement.”

Unfortunately, not all SCAD investigations worked out as well as this one. Others devolved into drawn-out hearings that took years to resolve. In some cases, discriminatory practices continued unabated years after a grievance was filed, and SCAD was often reluctant to use its prosecutorial powers to ensure full compliance. As a result, racial segregation continued to define housing patterns in many cities in New York, and several hard-core holdouts in organized labor, such as the building trades industry, either never integrated their ranks or did so at a glacial pace. But SCAD’s cases also illustrate how this state watchdog commission worked in limited ways to stamp out practices and policies that promoted discriminatory treatment.