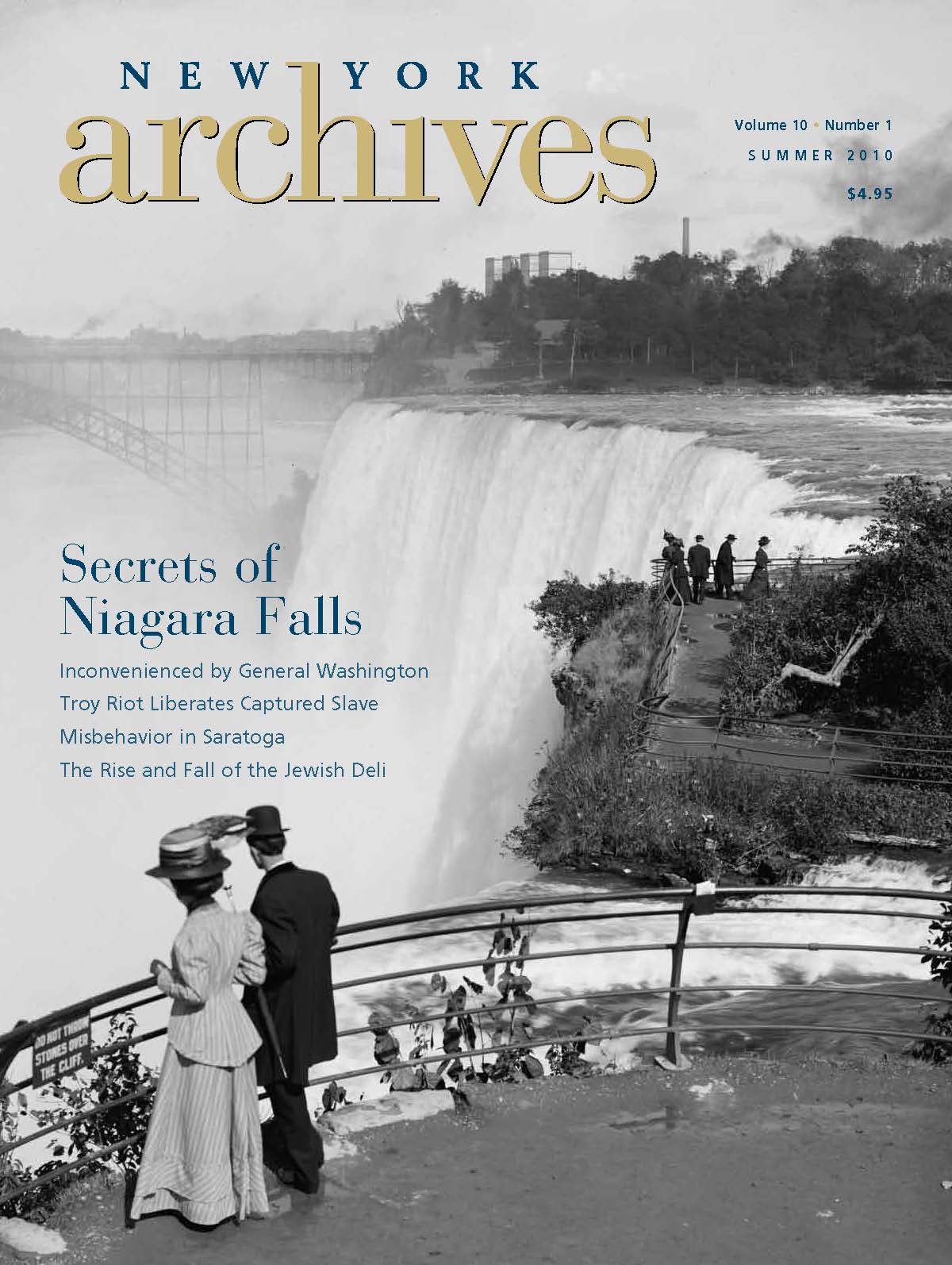 Niagara's Hidden History
Ginger Strand
Some of the most compelling stories about New York’s famous natural wonder have been either forgotten or deliberately ignored. But archives have revealed some secrets.

The Rescue of Charles Nalle
Scott Christianson
A fugitive slave was liberated, not captured, in upstate New York just before the Civil War, with the help of an outraged populace and Underground Railroad conductor Harriet Tubman.

A Woman of Colorful Means
Jane Lancaster
Madame Eliza Jumel was a wealthy and independent woman who seemed not to know her place in nineteenth-century Saratoga society––but what a place it was.

Pastrami on Rye
Ted Merwin
The New York Jewish delicatessen is as much a symbol of the Big Apple as any tourist attraction––and offers a far more personal experience. But how many are left?

Niagara Falls is one of America’s best-known natural wonders. Scholars have expounded on its role in shaping the American sublime, popular histories have recounted its capacity for power development, and souvenir volumes regularly recount tales of daredevils and honeymoons. The image of the Falls has graced everything from masterpieces of landscape painting to tea towels, from early Lumière Brothers films to blockbuster IMAX movies. A depiction of the Falls even occupies one corner of New York’s license plates, opposite the New York City skyline: landscape and cityscape, the state’s two must-see sights. Yet the most interesting features of this icon’s history have remained hidden—sometimes forgotten, sometimes deliberately ignored. My search for this hidden history led me to numerous archival collections—each of which, it seemed, yielded up another surprising story.

Beauty and Power
One of the most common tales told about Niagara Falls is that the family of Augustus Porter, who founded the town of Niagara Falls, kept the area around the falls in its natural state until the State of New York bought it in 1885. But letters between Augustus and his brother, Peter, founder of the town of Black Rock just upstream, show that this was far from the case. The Porters developed the Niagara environs to the best of their ability. In the 1820s and 1830s they built snack stands and viewing platforms, grist mills and tanneries, and even planned to build a large hotel for wealthy patrons on Goat Island, which separates the Canadian Horseshoe Falls from the American Falls. They also attempted, at least twice, to sell all their land at Niagara to wealthy “capitalists,” as they called them. They ran newspaper ads touting the potential water power to be had from the Falls.

After the Civil War, well heeled and well-connected gentlemen began appealing to the state to buy the area around the Falls. The movement, known as “Free Niagara,” was spearheaded by Frederick Law Olmsted, the famous landscape architect. Luminaries like J.P. Morgan, Oliver Wendell Holmes, John Jay, Thomas Carlyle, and John Ruskin signed a petition urging the creation of a state park at Niagara. They were successful in 1885. But left out of the story of a public minded movement is the profit motive that drove it. Many of the same men who signed Olmsted’s petition turned up on the board of the Niagara Falls Power Company, which succeeded, ten years later, in harnessing the Falls for electricity. In fact, Thomas Evershed, who surveyed the land around the Falls and drew up the map of the proposed state park, was the company’s engineer. History has painted him as a savior of Niagara’s beauty, but he was also thinking of money; Evershed’s map, which exists only in two hand-drawn versions, shows how he carefully drew the boundaries of the state park so that they wouldn’t interfere with the canals required to harness Niagara’s power. After the state park was established, the Falls was quickly harnessed, beginning a new industrial age at Niagara.

Mummies and Two-Headed Calves
For many years, the Niagara Falls Museum was an attraction rivaled only by the waterfall itself. Built at the brink of the Horseshoe Falls, the museum was owned by Thomas Barnett and his family, a museum clan dedicated to the study of natural history and the pursuit of exotic specimens. Their collections included plants, minerals, shells, and mounted birds and animals. Like many museums of the time, they also had a collection of “freaks of nature,” including a two-headed calf and a two-legged dog.

In the 1850s, the Barnetts acquired a group of Egyptian mummies that quickly became a featured exhibit at the museum, but shortly thereafter the family fell on hard times and lost possession of the collections they had built for years. Those collections passed through several families’ ownership and ended up, in 1999, in the hands of a Toronto shrunken-head collector named Billy Jamieson, who sold the mummies to an American museum for a hefty sum. To the shock of the antiquities world, one of the mummies turned out to be a pharaoh—Rameses I, founder of the New Kingdom’s 19th Dynasty.

Jamieson realized the mummy might have been a pharaoh because a diary recorded its purchase. Dr. James Douglas, a Montreal physician, had traveled to Egypt with Sidney Barnett, Thomas Barnett’s son, and in his travel journal Douglas related how he and Barnett had bought a mummy from an Egyptian antiquities dealer named Mustapha Aga Ayat. Mustapha was a well-known “fence” for a family of tomb robbers who had discovered a cache of royal artifacts in the cliffs of Deir el-Bahri. When the robbers were finally caught, authorities discovered the coffin of Rameses I in the tomb they had plundered. It was empty.

For decades, rumors persisted that a pharaoh lay among the artifacts at the Niagara Falls Museum, but no one could believe it. A royal mummy lying just steps away from a two-headed calf? Only when the Michael Carlos Museum of Emory University bought the mummies and began analyzing them using CAT scans and computer imaging was the rumor taken seriously. Egypt’s top antiquities expert examined the mummy and declared it to be a pharaoh, at which point it was returned to Egypt. Thus with the help of a simple diary, another of Niagara’s secrets was brought to light.

Icon of Fugitives
A little-known highlight of Niagara’s history is its role in the Underground Railroad. In the years leading up to the Fugitive Slave Act of 1850, slave catchers became increasingly active in northern states, and fleeing slaves began heading to Canada, where slavery was illegal. One of the key places to cross into Canada was the Niagara region. There were rail connections to the Falls, and the area was well known; many southerners even took their slaves with them when they went there on vacation.

Before 1848, when the first bridge across the river was completed, boats could be hired to cross the river into Ontario. At Black Rock, the river narrowed enough that some fugitives even attempted to swim across. As national dissent over slavery grew, fugitives by the hundreds crossed at Niagara to Canada, often helped by African American workers in Niagara’s restaurants and hotels. Harriet Tubman, who lived in nearby St. Catharines, personally led scores of people through Niagara Falls to freedom.

Peter B. Porter, Black Rock’s founder, watched all of this with dismay. He was a hero from the War of 1812 and was now a militia general. He had served in Congress and as John Quincy Adams’s secretary of war. He had also married into a prominent, slave-owning Kentucky family and even inherited twenty-five slaves himself. In fact, it’s one of Niagara’s most surprising secrets that General Porter, one of Niagara’s town fathers, aided and abetted slave catchers who came to Niagara to “retrieve” fugitives. He even helped spark Canada’s first race riot when he assisted a man, David Castleman, who attempted to extradite a fugitive named Solomon Mosby from Canada in 1837.

Castleman stayed with Porter while petitioning Ontario’s provincial governor for extradition. When the governor agreed and Mosby was arrested at Niagara-on-the- Lake, people began to gather outside the jail. As the deputy sheriff attempted to take Mosby to the ferry for extradition, an angry mob intervened and freed him. In the melee, two protesters were killed. Peter Porter wrote an angry letter to the governor after the incident, but it fell on deaf ears. In fact, the case only fueled Canada’s strong abolitionist stance. The following year, the British government upheld Canada’s decision not to extradite fugitive slaves to the United States.

Coded Spectacles
In sharp contrast with the Underground Railroad, there’s no shortage of stories about aerialist Blondin’s famous tightrope ascensions over the Niagara Gorge. Blondin is frequently mentioned in Niagara histories, but the significance of his performances isn’t. In 1859 and 1860, as civil war looked inevitable, Blondin’s spectacular crossings of the falls referenced the Underground Railroad through a series of codes. He crossed his tightrope dressed as a chef or a day laborer—jobs typically held by African Americans; he crossed shackled and with a sack over his head; he crossed in the dark of night; and he even famously crossed with his manager on his back. All of this transpired just a few yards downstream from the bridge that actual fugitives regularly crossed at night as they risked being dragged back to the South in shackles. The meaning of Blondin’s performances was made nearly explicit in the magazines of the times: cartoons in Harper’s and Vanity Fair depicted President Lincoln as Blondin, crossing a tightrope over Niagara Falls with a slave on his back. These cartoons, as well as accounts of Blondin’s performances, helped me decode the secret rhapsody to freedom behind Blondin’s apparent acts of pure spectacle.

The Waterfall and the Bomb
Not all of Niagara’s secrets are quite so far in the past. During World War II, Niagara Falls was critical to the building of the atomic bomb. This secret was successfully kept not only from the public, but from the laborers who did the work. Only in the 1990s did the truth begin to emerge: the government had hired dozens of private contractors to quietly conduct experiments to refine and roll uranium for the Manhattan Project. With its concentration of chemical and electro-metallurgical plants, Niagara Falls was home to many of these contractors. The effects of their work are still present today; for example, the Army Corps of Engineers is cleaning up seven radioactive sites within ten miles of Niagara Falls through a program known as FUSRAP (Formerly Used Sites’ Remedial Action Program). The Corps’s extensive documentation of the sites’ histories and cleanup efforts, deposited in local archives, ensures that another piece of Niagara’s hidden history will be made available to the public, now and in the future.