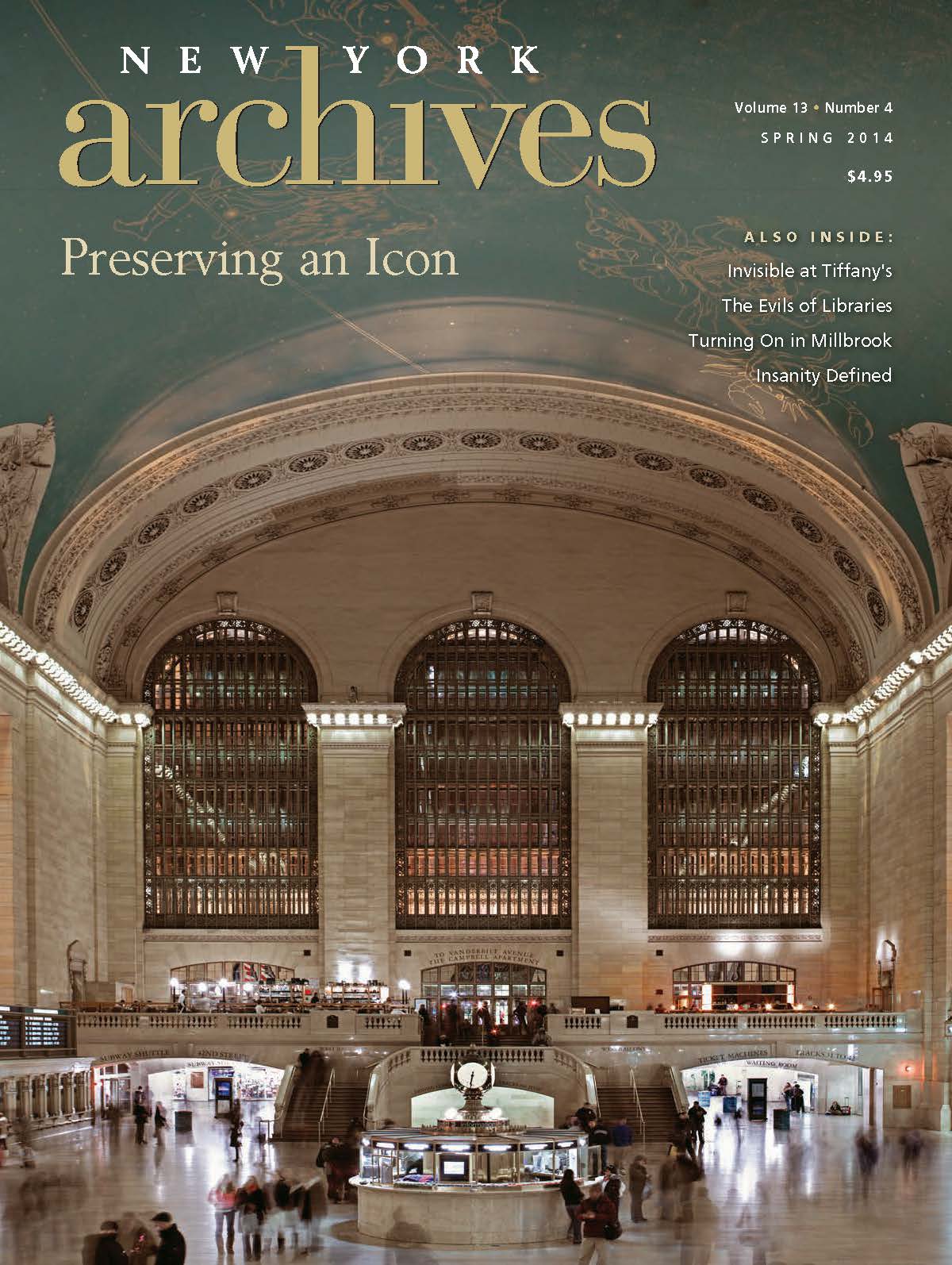 Saving Grand Central
Sam Roberts
A photo essay on Manhattan’s famous train terminal, by the author of its definitive “biography.”

The Woman Behind the Glass
Echo Heron
The gifted designer of Tiffany’s famous art-glass creations remained anonymous for
over a century.

A Minor Difference of Fact
Travis McDade
Not a whodunit, but a whydunit, and where––and the newspapers got it wrong.

Vanguard of a Revolution
Devin R. Lander
When the Psychedelic ‘60s came to reside in a bucolic upstate village, things
were groovy––until the media arrived.

The Health of the Mind
Paul J. Zwirecki
A respected physician with a controversial theory of insanity oversaw the country’s largest asylum in Utica.

It is the place where Standard Time was born in 1883, where the organized labor and civil rights movements were nurtured by A. Philip Randolph’s Brotherhood of Sleeping Car Porters, where air rights were first invoked on a grand scale in real property law and development, where the principle of landmarks preservation was affirmed, and where major architectural and planning innovations were introduced, including the harnessing of electricity for rail travel and the use of ramps instead of stairs to help baggage-toting passengers. Although, as The New York Times carped, Grand Central Station was neither grand nor central, it shifted Manhattan’s cultural center of gravity to midtown. And it helped create on Park Avenue what historian Mike Wallace has described as the first permanent haven for the rich in Manhattan, who had been routed from Washington and Union Squares by development pressures.

The Beaux Arts terminal, designed in 1903 by the New York Central Railroad’s visionary engineer William J. Wilgus, became one of the most recognized buildings in New York and a popular cultural icon, appearing as the setting of an eponymous weekly radio program from the 1930s to the 1950s and making cameo appearances in films and television. But since then, Grand Central has struggled to survive. The first attempt to destroy it was in 1954, when the railroad wanted to erect an office building in place of the station to maximize its air space. This proposal met with strong resistance from various New York organizations, and it was quashed. Preservation-ists continued to work to create a New York City Landmarks Law and protect Grand Central with landmark status, which was achieved in 1965. However, the new owner, Penn Central, got the landmark status overturned in City Court that same year, and it seemed inevitable that the building would be destroyed.

Years of legal wrangling ensued. Penn Central sued the state, arguing that the city was depriving it of income from the proposed skyscraper and causing economic hardship. In 1975, New York Supreme Court Justice Irving Saypol (who prosecuted the Rosenberg atomic spy case) ruled in the railroad’s favor, minimizing the architectural and cultural value of the terminal as “a long-neglected faded beauty.” Threatened with civil damages and faced with a severe fiscal crisis, the city tottered on the brink of letting Saypol’s decision stand. City lawyers themselves were ambivalent. But in the meantime, Grand Central had gained a powerful advocate: Jacqueline Kennedy Onassis.

She had been intimately involved in historic preservation as First Lady. In fact, when the Kennedy Administration helped finance the building of the Aswan High Dam in Egypt in 1963, the Egyptian government offered to give the United States one of the cultural icons that would have been destroyed in that construction. Mrs. Kennedy chose the Temple of Dendur, which now resides in the Metropolitan Museum of Art (she was known to call the museum to have the temple illuminated at night, to delight her dinner guests). Thus she brought both historic preservation experience and clout to the fight to preserve Grand Central.

When Mrs. Kennedy (by then Mrs. Onassis) read in The New York Times of an effort to galvanize civic leaders and arts patrons on behalf of Grand Central, she was inspired to send a handwritten letter to Mayor Abraham D. Beame. “Is it not cruel,” she wrote, “to let our city die by degrees, stripped of her proud monuments, until there will be nothing left of all her history and beauty to inspire our children?” After wavering, the mayor was persuaded to pursue an appeal, which wended its way through the state courts and ultimately to the U.S. Supreme Court. Ruling in the city’s favor in 1978, the Supreme Court saved Grand Central by upholding a municipality’s right to preserve historically valuable properties; denying the railroad’s application to deface the terminal with a skyscraper on top, said the Court, did not constitute an indefensible taking of private property. Thus Grand Central, as architecture critic Paul Goldberger has claimed, became the “poster building” for landmark preservation––but only after its supporters had rallied popular and political opinion to pursue the appeal in the first place.

For a time, the victory seemed pyrrhic. By the 1980s the terminal was a wreck, and there was neither money nor much of a constituency to restore it. The roof leaked; homeless people camped in the main waiting room; “mole” people lived in the labyrinthine tunnels below. Commuters couldn’t wait to get on a train or escape to the street. Then in 1983, Peter Stangl, a former college economics teacher from Connecticut, became the first president of the Metro-North Commuter Railroad––and he was committed to transforming the decrepit hulk of the once-majestic Grand Central into a first-class transportation hub and destination. He insisted that no legitimate expense be spared to salvage the aging terminal and make it into a shrine to what government at its most enlightened could accomplish.

Stangl began by counterintuitively removing a source of revenue: the giant Kodak Colorama, the world’s largest photo transparency. Though today it might be considered a landmark rather than an advertising eyesore, it was emblematic of the commercialism that had invaded the terminal. Once the light, air, and traffic flow were unblocked and the terminal’s windows were revealed, workers began scraping the skylights that had been painted over since the blackouts of World War II and restoring the 25,000- square-foot celestial ceiling. With each improvement, more and more New Yorkers became committed to preserving the building, and Stangl began to create a constituency for a restoration that would ultimately cost over $100 million.

Stangl’s vision, and a joint partnership of public and private funders, has produced a Grand Central that today is even grander than the original, although it serves a very different constituency in a very different city than when it opened over a century ago. It remains to be seen whether Grand Central will continue to struggle for its existence, or whether it will finally be accepted as a permanent fixture in the pantheon of New York’s iconic buildings.