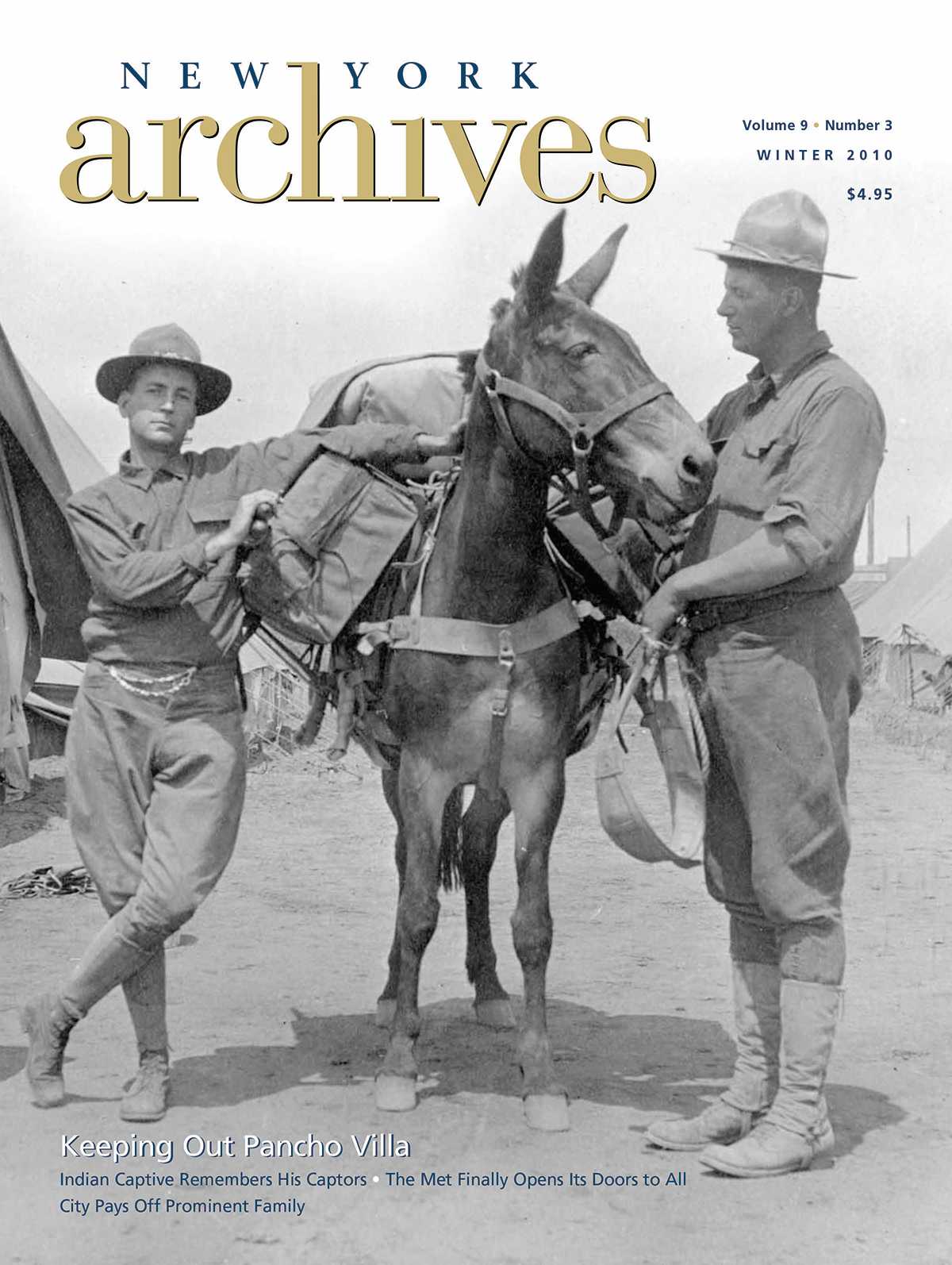 The Classes vs. the Masses
Jerri Sherman
The Metropolitan Museum of Art, founded in 1870, took twenty-one years to open its treasures to the public on Sundays. It turned out to be a wise decision.

The Widow’s Son
Karim M. Tiro
A young white boy, captured by Indians during the Revolution and then freed, grew up in two cultures. But he never forgot his adoptive parents.

One Fatt Calfe
Eve Pell
The Pell family has received an unusual gift from the City of New Rochelle— and its predecessor, the Pelham Manor—since the seventeenth century.

New Yorkers on the Southern Border

On March 9, 1916, more than 400 Mexican rebels under the command of Francisco “Pancho” Villa raided the town of Columbus, New Mexico. The Mexicans engaged a mixed force of soldiers and armed civilians, and the resulting melee ended with eight American soldiers killed, six wounded, and another ten civilians killed. The town was ransacked and left in ruins. As newspapers stirred the call for retribution, the American military mobilized in response to the attack.

Between March 16, 1916 and February 14, 1917, a force of about 14,000 Army troops under the command of Brigadier General John J. Pershing operated in northern Mexico under orders to disrupt Villa and put an end to these border raids. In addition, more than 100,000 National Guard troops were activated to patrol the American side of the border in support of the operation. This little-remembered chapter in American military history became known as the Mexican Punitive Expedition, the first large-scale American military exercise since the Spanish-American War in 1898.

Just fifteen days after Congress approved the National Defense Act on June 3, 1916, National Guard units from all over the nation were called into federal service for duty along the border. This call-up marked the first nationwide mobilization of the National Guard in American history. Because of their proximity, militia units from Texas, Arizona, and New Mexico were the first Guard units to be called, but by the end of August nearly 112,000 guardsmen were deployed on the southern border. The soldiers were sent to four main staging areas, at Douglas, Arizona and San Antonio, Brownsville, and El Paso, Texas.

New York Responds
On June 18 in New York State, Major General John F. O’Ryan, the commanding general of the New York National Guard, was at Camp Smith in Peekskill when he received a phone call from Governor Charles Whitman, who advised the general that the president was calling up the National Guard for duty. O’Ryan then issued orders requiring all units to assemble at their respective armories the following evening. In his book, The Story of the 27th Division, O’Ryan stated that within twenty-four hours, more than 15,000 men had assembled and were ready for duty.

To assist in the training of such large numbers of troops, the 69th Infantry and two companies of Engineers were sent on June 20 to Green Haven in Dutchess County to clear the land and install water and septic facilities. At the same time, General O’Ryan moved his headquarters to the Municipal Building in New York City. The excitement associated with the activation of the Guard reached to every corner of the state. Parks and schoolyards became military drill grounds and tented encampments; regimental chaplains reached out to employers to ensure that the soldiers’ families would be supported during the deployment.

In his History of the Seventh Regiment, Dewitt Clinton Falls recalled the exhilaration that surrounded the famous Park Avenue Armory as the New York troops gathered to leave for the border: “The Armory was besieged all day by large crowds of friends of the Regiment and many ex-members who desired to re-enlist… Rations were provided for the Regiment in the Armory but many of the visitors brought all kinds of supplies with them, and all kinds of appliances were rigged up to hoist the various articles through the windows… .”

Before leaving New York City, Colonel Willard C. Fisk was presented with $5,000 in cash by the Seventh Regiment Veterans Association to support the needs of the regiment in the field. But private donations could not procure everything. Almost immediately, New York military officials recognized a severe shortage of uniforms and equipment within their assembled units. General O’Ryan had anticipated such a situation years before, and to his credit had arranged for the Philadelphia Arsenal to store and reserve equipment in case New York’s military forces were ever activated for federal service. But the War Department released New York’s equipment reserves to the units from other states that preceded New York troops to the border. O’Ryan, a prominent attorney in civil life, was aghast at the bumbling inefficiency of the government, and he was equally critical of the decision made by federal authorities not to disrupt commercial rail traffic in deference to military transport needs. Thus transport of the New York Guardsmen (and more than 3,000 horses and mules) to the border was much delayed by this policy.

“All These Bugs and Reptiles”
The eventual trip south was memorable. Wherever the train stopped, the public gathered to make the soldiers feel at home. In Buffalo, the American Red Cross delivered sandwiches to the men, while the officers were driven to a nearby club for steam baths, showers, and swimming. The trip was not without controversy, however. In Cleveland, the New York Guardsmen left the train and were part of a rowdy contingent of some 700 soldiers who raided the city’s grocery stores for food and merchandise and destroyed what they could not carry away. The soldiers were eventually driven back to the trains by an armed detachment of twenty men.

Once New York’s troops arrived at the border in early July, they assembled at three campsites at Mission, McAllen (known to soldiers as “Muck Allen”), and Pharr, Texas, all located about sixty miles from Brownsville near the mouth of the Rio Grande River. Soon after their arrival, the men discovered that the inadequate water supply would only serve about half of the men assigned to the camps. To solve this problem, the New Yorkers turned to the accomplished citizen-soldiers within their ranks.

In civil life, Lieutenant Colonel Merritt H. Smith of the 1st Field Artillery was the chief engineer for the New York City water supply, and two other men were hydrological engineers. They went to work on the problem, and a new and efficient water system was soon serving the needs of the New York troops. A strict standard at the command level was also set. One of the first actions taken by General O’Ryan in the field was an order that banned the use of alcoholic beverages and prohibited any New Yorker from entering a house of prostitution. As a result, the New York division had one of the lowest disease rates in the expedition force.

The soldiers were universally struck by the landscape they encountered. One soldier described the unit’s headquarters at McAllen, Texas: “The ground was flat and ankle deep in dust, with… scattered clump[s] of small cactus and misquite [sic] bushes.
When the work of clearing the ground began it was found that what vegetation there was contained all kinds of animal life, small prairie dogs, horned toads and snakes, scorpions, tarantulas and centipedes…sixteen rattlesnakes alone were killed—to say nothing of other vermin. Every bit of growth that might harbor animal life was finally cleared and the camp pitched.”

Another soldier, C. Harold Floyd, recalled: “As to tarantulas, scorpions, centipedes and rattlesnakes, we considered all these bugs and reptiles deadly and for the first few days lived in constant dread of them. In time, however, while we looked before sitting down and were careful to shake a shoe before putting it on, we gave little thought to any of these pests.”

But the hard work of clearing the land, and the rigors of camp life in the hostile climate, took a toll. Heat and disease proved a more formidable enemy than the Mexicans; of the twenty-four New York soldiers who died in service during the border expedition, sixteen died of disease and eight died of injury. On long marches, the heat could break an otherwise healthy man. Private Arthur Van Rensselaer was heir to one of the great Hudson Valley fortunes, but his service on the border with the Seventh Regiment left him shattered, a victim of severe sunstroke and total paralysis from which he never recovered. Six years later, he invented the electric wheelchair to help him compensate for his disability. For most of the New York troops, however, service on the border involved drilling, digging, and constructing shelters, with long patrols and rifle training thrown in for good measure. Most of the men didn’t encounter the Mexican rebels and never fired their weapons in either self-defense or anger.

Futility…or Preparedness?
In early September 1916, four New York regiments were withdrawn from border service and sent to New York City by rail to deal with an impending labor strike. It was boldly reported that the mere news of the impending return of the National Guard troops diffused the labor strife in the city. 1916 was also a presidential election year, and a special commission was sent to Texas from Albany to register the remaining New York Guardsmen and collect the ballots. Dewitt Clinton Falls dismissed the effort as little more than a “political job” and noted that despite the public expense of printing the ballots and transporting commission members, the freight cars containing the ballot boxes remained in Texas long after the results had been tallied and Woodrow Wilson was declared the victor over former New York governor Charles Evans Hughes.

After the election, Governor Charles Whitman arrived in Texas on November 16 to review the troops. Just one week later, the Seventh Regiment completed its service and began its return trip home. The regiment had left New York with 1,267 officers and men. According to records, 1,070 of these men completed the tour of duty, and three regiment soldiers died on the border. Their names are inscribed on a tablet on the main staircase in the elegant Seventh Regiment Armory in New York City.

A modern historian of the New York National Guard described the border service as “an exercise in futility… The soldiers marched a lot, rode horses and practiced their rifle marksmanship, firing bullets across the river at cactus plants and sagebrush. As it turned out, the only punitive action for the Seventh was killing rattlesnakes and scorpions.” But such criticism ignores the impact that the operation had on the Guard in terms of bringing a more professional military bearing to the organization, more efficiently preparing and equipping the soldiers, establishing logistical lines of supply, and better organizing government and political support for troops in the field. Prior to the Mexican Punitive Expedition, the United States military had existed in a sleepy peacetime stasis––but the expedition changed that. In total, about two-fifths of the National Guard troops called up in the summer of 1916 were still on active duty when the U.S. declared war on Germany in April 1917; the mobilization and modernization of the Army during the expedition would prove invaluable in preparing the military and its officers for the grim experience of World War I.