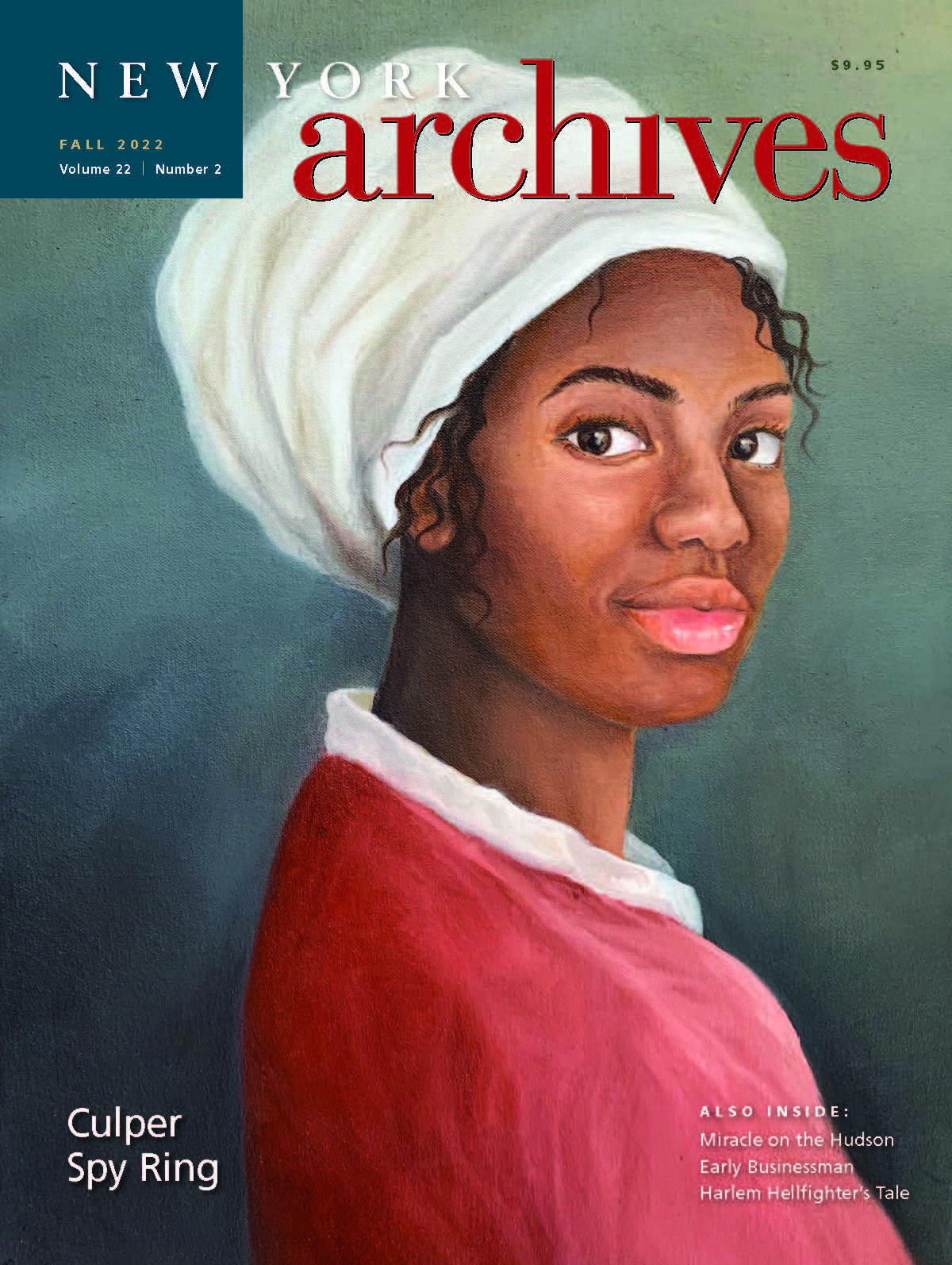 Selah Strong
Mark Sternberg
It’s time to rethink this patriot, long overlooked for his heroism during the Revolutionary War.

Hudson Heroes
Bruce W. Dearstyne
History in real time, like the “Miracle on the Hudson,” produces a paper trail for future historians.

“My Year in France”
Jeffrey T. Sammons
Harlem Hellfighter Clinton J. Peterson told his own story about his journey from almshouse to military hero.

History in the Making: Finding Liss
Claire Bellerjeau and Tiffany Yecke Brooks
By connecting letters, ledgers, logbooks, and other records, the enigmatic “Liss” had a story all her own to be told. 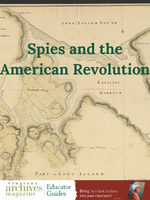 RECORDS REVEAL AN OVERLOOKED HERO OF THE CULPER SPY RING

In late 1777, Patriot and Long Island-native Selah Strong was arrested for what in present-day terms would be regarded as spying. While Selah’s spouse, Anna “Nancy” Strong, and his close friends would be considered part of George Washington’s Culper Spy Ring, only a few historians have included Selah as a member. This network of spies operated during the Revolutionary War and smuggled information out of the British headquarters in New York City via British-occupied Long Island and across the Long Island Sound, eventually to the Commander-in-Chief himself. By re-examining primary sources for the first time in hundreds of years, Selah’s heroic role in the Culper Spy Ring finally comes to light.

Even before the Revolutionary War came to Long Island shores, Selah was an ardent Patriot. In 1775, Selah was elected as a representative of Suffolk County in New York’s prestigious Provincial Congress, where on one occasion he even had the opportunity to meet with Washington himself. In that same year, he was elected as part of Brookhaven Township’s Committee of Safety, a local Patriot government which supplanted the one loyal to the Crown and which included future members of the Culper Spy Ring like Abraham Woodhull, Nathaniel Roe Jr., and Phillips Roe. Records also show that Selah was a captain of a company in Colonel Josiah Smith’s regiment. As fate would have it, Selah was at home with a fever while his company fought as part of the larger American force which was soundly defeated at the Battle of Long Island.

Treasonable Correspondence
Selah and others in Setauket, Long Island, began spying for the American cause before the Culper Spy Ring was organized. On December 29, 1777, a little over a year after the British took control of Long Island and Selah returned to civilian life, he was arrested for sending letters and information to Patriot General Samuel Parsons. Selah was charged with the civilian crime of “treasonable correspondence with his Majesty’s enemies.” This particular charge is different from being a “spy,” which at the time was more of a legal term that generally required the accused be in the military and caught actively disguising their identity, such as in the famous cases of the American spy, Nathan Hale, and the British spy, John André. For his crime, Selah was sent to the Provost, a notorious prison in Manhattan under the control of the cruel provost-marshall, William Cunningham.

Erroneous assumptions regarding Selah’s location during the Revolution have obscured his significant involvement in the ring. First, many presume that Selah was imprisoned for a lengthy period of time. If Selah was incarcerated during the operation of the Culper Spy Ring, it would definitely have prevented him from participating. The second assumption is that, upon his release, Selah is alleged to have immediately fled to Connecticut, deserting his wife, Anna, and their children on Long Island. If Selah was not on Long Island, where the Culper spies conducted their activities, it seems unlikely he could meaningfully contribute. However, after reviewing manuscripts in three archives, one realizes that these assumptions are entirely wrong.

A key document from the New York State Library’s Manuscripts and Special Collections dispels the first part of the Selah Strong myth—that he spent a significant amount of time in prison. Among the Andrew Elliot Papers is a certification for the election of Setauket locals Benjamin Floyd and Joseph Brewster to be representatives to correspond with the Loyalist Governor William Tryon. On this election certification, dated June 23, 1778, the local justices of the peace signed their names attesting to the results of the election. Among those five justices was Selah Strong himself. With Selah certifying this document in his own hand, it is clear that Selah spent less than seven months in the Provost and was freed, or at least paroled, back to Setauket by the time the Culper Spy Ring began in August of 1778.

Political Refugees?
As to the second part of the Selah Strong myth, did Selah flee to Connecticut upon his freedom from the clutches of Provost-Marshall William Cunningham? Historian Frederic Gregory Mather, author of The Refugees of 1776 from Long Island to Connecticut, published in 1913, was the first to imply that Selah Strong, along with his sister Susannah (Strong) Shelton, fled to Connecticut at some point as political refugees. Mather bases this conclusion on the fact that the two were asking for permission to return from Patriot-controlled Connecticut to British-controlled Long Island to visit their aging parents in March 1781. It appears that as the story of Selah Strong was retold over time, it evolved to indicate that Selah fled to Connecticut almost immediately after he was released from prison.

Mather’s work expounded upon Henry Onderdonk Jr.’s Revolutionary Incidents of Suffolk and Kings Counties. In Onderdonk’s book, published in 1849, the brief excerpt reads: “Mar. 20, '81. Mrs. Shelton and Mr. Strong, living at Stratford, wish to visit aged parents at Brookhaven.” Onderdonk does not provide an exact citation, only stating the document was among petitions of Suffolk County refugees who now wished to leave Connecticut. Fortunately, it was still possible to track down the original request in the Connecticut State Library and Archives even without the specific citations.

The original request for permission to visit Long Island for Shelton and Strong was addressed to Connecticut Governor Jonathan Trumbull and was written by Benjamin Tallmadge, spy chief for the Culper Spy Ring. Immediately upon reviewing Tallmadge’s original written request, it appeared that a major error had been made in Onderdonk’s transcription. The first line of Tallmadge’s letter reads “At the request of Mrs. Shelton and Mrs. Strong…” As it turns out, Onderdonk had erroneously transcribed Tallmadge’s handwriting as “Mr. Strong” and thus the myth that Selah fled to Connecticut was born. Comparing the handwriting characteristics in this document to other letters from Tallmadge, particularly one to Jeremiah Wadsworth in the Connecticut Historical Society where Tallmadge wrote both the titles “Mr.” and “Mrs.,” it became obvious that Onderdonk had made this mistake. Furthermore, later in that same request, Tallmadge refers to the two subjects as the “above mentioned ladies.” Though it should be noted that, as “Strong” was a fairly common surname, there is no reason to assume this “Mrs. Strong” refers to Selah’s wife, Anna “Nancy” Strong.

Pension Records
With the knowledge that Selah Strong was at his home on Mount Misery Neck (the peninsula that now comprises the village of Belle Terre and the Port Jefferson community called Harbor Hills) throughout the operation of the Culper Spy Ring, the next task was to search for proof of his direct involvement. As it happens, evidence would be uncovered while examining the National Archives’ Revolutionary War pension records for crew members of the Culper Spy Ring’s whaleboat courier, Caleb Brewster. Several individuals had mentioned serving under Caleb Brewster in his secret service as part of their depositions. However, one particularly notable pension application comes from an intermittent member of Brewster’s crew named Robert Brush. Brush’s application received an endorsement from Brewster himself and provides details that transform our understanding of the Culper Spy Ring’s operations.

While the entire deposition is informative, the section regarding Selah Strong is particularly illuminating on his role in the ring. According to Brush:

“[Brewster and his crew] usually started and landed on the island during the night and taking their boat up in the woods, they lay under it if the weather was inclement and it was safe to do so or concealed themselves somewhere in the neighborhood. Their usual places of landing were Setauket, Stony Brook, a place called the Old Man’s, and Crab Meadow (seldom however at the latter place being too near the British). At the place called “Old Man’s,” Capt. Selah Strong lived and from him they received such assistance and information as they needed when it was safe for him to do so, but if it was unsafe to do so or for them to remain there, Strong by some sign communicated the fact to Brewster. He remembers many times to have seen Strong pass the place of their concealment, as it were to fodder his cattle or [to] see to some work on his farm and by a shake of his head as he passed intimate to them that it was unsafe to hold any conversation or for them to stay there.”

To clarify part of Brush’s statement, “Old Man’s” is modern day Mount Sinai, which is just east of Port Jefferson. Selah Strong’s house was on the eastern side of Mount Misery Neck, near Mount Sinai harbor, though his house would be considered part of Port Jefferson today. As for the rest of Brush’s statement, we learn that Selah ensured a safe hiding spot for Caleb Brewster and his crew while Brewster communicated with the spy whose pseudonym was Samuel Culper. This put Selah Strong at incredible risk, as he was arrested once for participating in espionage and, if he returned to prison, he would have a high likelihood of dying from disease or starvation. (More Americans died in prison than on the battlefield during the Revolutionary War.)

With the 250th Anniversary of the Revolutionary War approaching, there is a unique satisfaction in being able to recognize Selah Strong as a brave collaborator of the Culper Spy Ring. We can give him the credit he deserves and dispel myths that diminished his legacy. And, as evidenced here, the historic details of the Culper Spy Ring itself are far from settled. Only by returning to primary sources maintained by venerable archival institutions throughout our nation can we take steps to finally reveal the true story.

The Andrew Elliot Papers at the New York State Library and the Trumbull Papers at the Connecticut State Library each provided key manuscripts presented in this research. Revolutionary War veteran pension applications were obtained from the National Archives through their partnership with the online platform, Fold3. Documents held at the Connecticut Historical Society and the Long Island Collection at East Hampton Library were necessary for additional handwriting samples from Benjamin Tallmadge and Selah Strong, respectively. Background information on Selah Strong was also obtained via newspaper articles in Readex’s America’s Historical Newspapers database, and from nineteenth century publications regarding New York State history that are digitized and made available via Hathitrust. The map of Setauket and additional background information on Selah Strong comes from manuscripts archived in Clements Library at the University of Michigan.

For more on the history of the Culper Spy Ring, see: