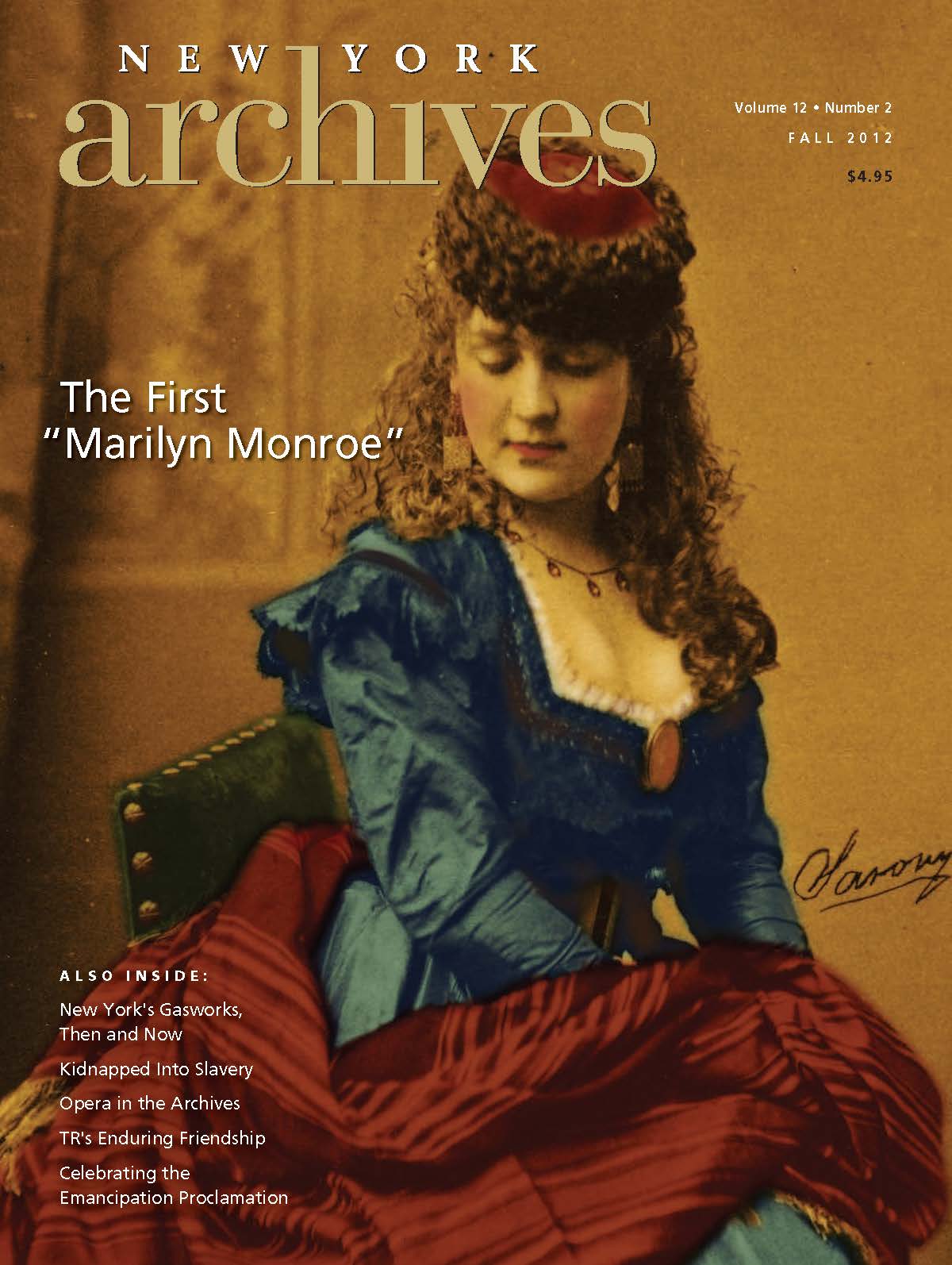 Rescued by the Law
David Fiske
A free black New Yorker was kidnapped into slavery. It took another New Yorker to carry out the law and bring him home.

Voices from the Archives
Thomas Holliday
Archives illuminate the life of an eminent American opera composer and librettist.

The Lion and the Journalist
Chip Bishop
One was an editorial writer, the other became president. Together they changed New York City––and later, the country.

New York’s Gaslight Era and Its Legacy
William D. Lilley
For over 100 years, manufactured gas was the major energy supply for the cities and towns of New York. The state is still paying its costs.

By Barbara and Michael Foster

We live in a star-studded world. From blockbuster movies to (supposed) reality TV shows such as “Dancing with the Stars” to the tabloids at every supermarket checkout, pictures and stories about celebrities bombard us. But when and where did this overweening celebrity culture begin?

It was at the Green Street Theater in Albany, New York on the verge of the Civil War, on a Monday evening in June of 1861, when pretty, dark, curvy Adah Isaacs Menken first performed in Mazeppa, a cry for freedom against the tyrannical Russian czar. Taken from a poem by Lord Byron, the popular drama’s lead role of Prince Mazeppa was, of course, played by a male actor. But in the key scene, after losing the battle the captive prince was tied to a “wild, untamed stallion” and sent up the ramps of a four-story stage mountain, complete with props of wolves and vultures, to perish in the wilderness. The ride was considered too dangerous for the actors, and a dummy was usually attached to the trained horse. But on this night, Adah Menken, who’d grown up in Texas supporting her family as a circus performer, did the ride in person, tied down wearing—nothing, or so it looked to the wildly cheering audience. In fact, Adah wore a sheer, flesh-colored body stocking, and at the groin was placed what Mark Twain described as “a little dimity nothing,” something like a baby’s diaper.

As she exited the stage above the proscenium arch, Adah brought down the packed house. It was the beginning of a brief but sensational career that ranged from Broadway to Gold Rush California to London and Paris and that made Adah the first superstar performer, nicknamed by the press The Naked Lady.

A Star in the Making
She was born Adah Bertha Theodore in New Orleans in 1835. Her beloved mother was a woman of color, her natural father was Jewish, and her stepfather was Irish, a retailer who went broke. Beginning in her teens, Adah supported the family by performing. Appearing in Havana at seventeen, the beautiful young woman with the mop of dark curly hair had an affair with the Cuban poet and revolutionary Juan Clemente Zenea; in his poem Silva, the poet is transfixed by her voice and gestures. Returning to New Orleans, Adah married and divorced a minstrel show performer. Next in line came Alex Menken, the black sheep of a Jewish merchant family.

Living in Cincinnati with Alex’s family, Adah became a protégé of Rabbi Isaac Wise, founder of Reform Judaism and a fervent contributor to The Israelite. While Adah defended Jewish causes, her overshadowed husband drank. By early 1859, Adah was doing comedy in New York, and by midsummer she had left Alex, believing they were divorced.

Adah was a versatile performer who could sing, dance, and exchange repartee with the audience. In New York she pursued her stage career in the popular Bowery theaters, and she became involved with a handsome pugilist, John Heenan. In 1860 Adah quietly married Heenan before he sailed for England to fight for the world heavyweight championship. While he was away, Adah frequented Charlie Pfaff’s tavern at 653 Broadway (currently a shop in Noho). In this dim, smoky cellar, Adah met New York’s first Bohemians, and she became friendly with Ada Clare, the feminist writer; Artemus Ward, America’s first stand-up comic (who defined a Bohemian as “an educated hoss thief”); and Walt Whitman, the great American poet who was roundly despised by both press and pulpit. Adah wrote an essay defending him, “Swimming Against the Current.” The title could also sum up her own life.

When John Heenan returned to America victorious and acclaimed as a great sports hero, he denied he had married Adah and derided her as a prostitute. Then up popped Alex Menken, who declared he had never divorced Adah and that she was a bigamist. Her child by Heenan died, and Adah attempted suicide. The tabloid newspapers jumped on the scandal, sweeping aside the election of Lincoln as president. Adah, recuperating, was helped by Robert Henry Newell, a humorist and literary editor of the New York Sunday Mercury, a respected weekly. Newell also despised Whitman, though he had printed Adah’s essay; he had fallen in love with her. Another supportive friend was Ed James, journalist for The Clipper, the Variety of its day. James, a Member of Parliament, had been caught making love to a nobleman’s wife and fled London for New York. He would become Adah’s confidant and, more importantly, her publicist.

An Avalanche of Success
The huge success of Albany’s Mazeppa in 1861 triggered an avalanche of offers for Adah. She played the circuit of theaters in upstate New York, the Midwest, and the border states. Her arrival in leading cities was announced by telegraph, posters around town, and glowing reviews in the newspapers. Despite the onset of war, Adah played to sold-out theaters, often within hearing distance of cannon fire from the front. Mazeppa’s message of liberty overcoming tyranny suited a country at war, and Adah the woman/prince became the country’s darling. Advance theatrical seating was introduced, preachers denounced Adah’s supposed nudity, which only swelled the crowds, and the papers ran imagined stories of her love life. In 1863 Adah married Robert Newell, accepted an offer of one-third of the gate from California Gold Rush impresario Tom Maguire (a former New York cabbie), and set sail for San Francisco.

About this time a magnificent spectacle dazzled my vision—the whole constellation of the Great Menken came flaming out of the heavens like a vast spray of gas jets, and shed a glory abroad over the universe as it fell. I have used the term “Great Menken” because I regard it as a more modest expression than “The Great Bare.”

Adah indeed dazzled San Francisco, then moved on to Virginia City, Nevada, the rip-roaring boomtown whose Comstock Lode of gold and silver largely financed the Union armies. Adah’s nightly performances were greeted with gusto by the miners, who tossed bags of gold dust onstage in appreciation. Here Adah met Captain Paul Barkley, a gambler and possible Confederate agent. Adah ditched husband Newell, Barkley forgot about the war, and both sailed off to London together. They would be married—Adah’s fifth marriage— but it lasted only a few days. It did give Adah a son whom she adored, but the boy died in childhood.

An International Image
Victorian London loved Adah, and her friends included Charles Dickens, the Pre-Raphaelite circle, and the poets Algernon Charles Swinburne and Alfred Lord Tennyson. Adah moved on to imperial Paris, where she was again a sensation in a risky horse drama. The womanizing Napoleon III courted her, George Sand befriended her, and this time Adah chose for a lover the elderly Alexandre Dumas of Three Musketeers fame. Dumas’ father, one of Napoleon Bonaparte’s generals, was a black man from Haiti, and Dumas boasted of his African heritage. Adah’s affair, the subject of international gossip, was thus an affirmation of her own heritage.

Back in postwar New York and once again its sensation—she played for half the gate at the packed Broadway Theater—one day in April 1866 Adah strolled into Napoleon Sarony’s Manhattan photo studio at 630 Broadway (in today’s Soho). She had been disappointed with previous photographers, whose portraits of her were stiff and lifeless, and hoped that the French-Canadian Sarony, known as “the Rembrandt of the camera,” would capture not only her looks but her feelings. Sarony, a short man with a sparkling face accented by a goatee, took command. His camera had no aperture, and to adjust the light he used the Venetian blinds on his studio windows. Adah had to pose for at least a minute for each shot.

Trained as a lithographer and a student of European art, Sarony placed Adah in a variety of poses to create a dramatic effect. He was searching for the actress’s quintessential attitudes and the emotions they represented. Costumes and backgrounds were also important, and Sarony would later hand-paint some of the black-and-white photos. But most important was the visible synergy between subject and photographer. He took more than 100 negatives on silver-coated glass plates of the volatile superstar. Days later, when Sarony produced his final results, Adah threw her arms around him, exclaiming, “Oh, you dear delightful little man. I am going to kiss you for that.”

Sarony went on to become the leading portrait photographer of his day, mass-producing images of Sarah Benhardt, Lily Langtry, and President Grover Cleveland. But Adah Menken was the first star whose sensuous image was turned into thousands of 3 x 5- inch cartes de visites (photographs mounted on postcards). In turn, these were copied by poster artists whose work decorated many a billboard and saloon wall.

Adah was the original love goddess who occupied the fantasies of young men across much of the globe. The phenomenon would not be equaled until Richard Avedon photographed Marilyn Monroe in the 1960s, this time during the Cold War. As Avedon said of Monroe (which goes double for Menken), “She was more comfortable in front of the camera than away from it.”

Adah Rises Again
Adah returned to London, and then Paris. She threw away her money, often to the poor in the street. In 1868, after one fall too many from Mazeppa’s stage mountain, she lay dying in a Parisian garret. Henry Wadsworth Longfellow read her a last love poem, while outside a crowd clamored at the theater doors to see The Naked Lady’s next performance. She was only thirty-three years old.

Le Menken was buried in the paupers’ enclave of the Jewish section of Père Lachaise Cemetery in Paris. But she did not rest long in obscurity; Adah became the most popular ghost called up in séances during the Spiritualism craze of the late nineteenth century. Arthur Conan Doyle turned Adah Isaacs Menken (AI) into Irene Adler (IA) in his original Sherlock Holmes tale, A Scandal in Bohemia, wherein Dr. Watson declares, “To Holmes she is always the woman.”

The character based on Adah is the strongest in the Holmes canon, and is still in vogue. Currently she is played by Rachel McAdams in Guy Ritchie’s two films, Sherlock Holmes (2009) and Sherlock Holmes: A Game of Shadows (2011). Earlier, Adah had been played by Ruth Roman in the television series “Bonanza,” and in 1960 by Sophia Loren in George Cukor’s only Western, Heller in Pink Tights. Earlier still, Stella Adler had played Menken as “the divine Jewess” for the Group Theater. Jerome Kern was a Menken fan, as was Billy Rose and as Michael Tilson Thomas is today: the San Francisco Symphony’s hit series of concerts
this year, “Barbary Coast and Beyond,” features, once again, Adah Menken.

The superstar lives on.