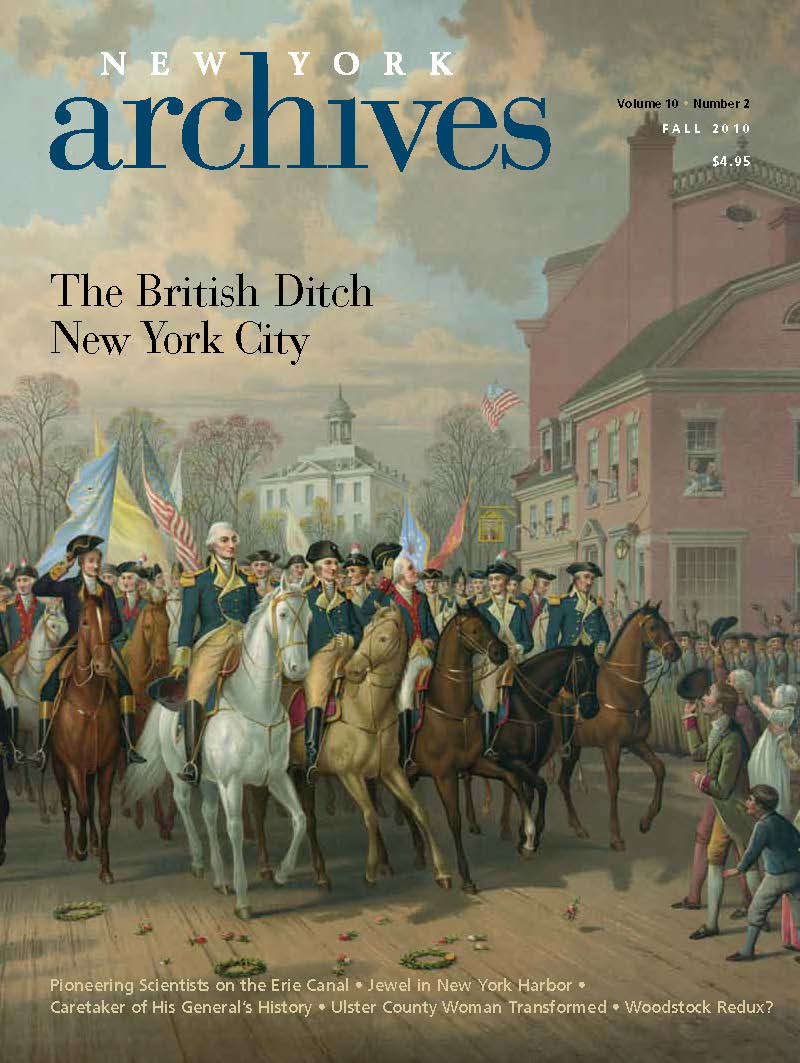 Evacuation Day
Jennifer E. Steenshorne
The holiday that marked the withdrawal of the British from New York City in 1783 was once considered New York’s equivalent of Independence Day.

New York's Best-Kept Secret
Ann L. Buttenwieser
If an island with historic importance four minutes from a major city is your idea of a recreational day out, look no farther than Governors Island.

Grant's Faithful Soldier
Steve Trimm
Oliver Clarke was a young soldier, then a POW, then a scarred Civil War veteran. But when he became caretaker of Grant Cottage in Saratoga, he found his calling.

In Search of Truth
Margaret Washington
The woman who was Sojourner Truth began life in the Hudson Valley as a slave named Bell. Her remarkable transformation made––and was responsible for––history.

Fireworks, parades, squabbling local politicians, marching veterans, crowds, parties: all the familiar elements of a Fourth of July celebration–– except that New York’s Independence Day was celebrated in November. Evacuation Day, commemorating the November 25, 1783 removal of British troops from New York City, was the state’s most important civic holiday until the Civil War. But after the war, with the exception of a brief resurgence in 1883, it waned in public consciousness, disappearing by 1916 to remain, in historian Clifton Hood’s words, “a holiday that was dedicated to memory… remembered for having been forgotten.”

British troops occupied New York City after the Battle of Long Island and the Continental Army’s retreat in 1776, and New York became the American Gibraltar, the base of British operations. It also became a mecca for Loyalists and thousands of escaped slaves and free blacks. General Sir Guy Carleton was appointed commander in chief in 1781, but after Cornwallis’s defeat at Yorktown in October of that year, Carleton organized the removal (mainly to Canada) of Loyalists of all races who wished to leave.

The British Depart
Word of the signing of the Treaty of Paris reached New York in early November 1783. While the treaty marked the official end of the war, the evacuation of the British troops and the celebrations that followed marked the psychological and emotional end. On November 21, 1783, Carleton ordered his troops to prepare for departure. Major General Henry Knox led 800 Continental troops to the northern boundary of the city, while George Washington and Governor George Clinton waited in a tavern in Harlem. On November 25, the British marched down the Bowery to the East River, jeered by the crowd, many wearing the “union cockade” of black-and ribbon and laurel sprigs in their hats. A Mrs. Day hoisted her American flag a trifle early, and when confronted by a British officer, she bloodied his nose with a blow from a broomstick—the only violent exchange of the day. In a farewell gesture, the British greased the flagpole at Fort George in the Battery without removing the Union Jack, which was replaced with the American colors only after a young sailor named John Van Arsdale donned cleats and climbed the pole. (His descendants retained the honor of hoisting the flag on Evacuation Day until the end of the nineteenth century.)

At 1 p.m. a cannon fired, signaling the British departure. General Knox and his troops entered the city, followed by Washington and Clinton, representing military and civil authority. The procession of troops, led by Knox, Washington, Clinton, the Common Council, and citizens on horseback and on foot, proceeded down Queen Street and Broadway to Cape’s Tavern. The “elegant and efficient disposition which prevailed through the whole event,” and the contrast between the arrogant British and the dignified Americans, were much remarked upon.

Many raucous celebrations followed. On the evening of November 25, Governor Clinton held a dinner at Fraunces Tavern for Washington and his officers. In honor of the allies and with hope for the future, thirteen toasts were drunk, such as “May the remembrance of this day be a lesson to princes.” On the 28th, “citizens who lately returned from exile” entertained the governor, the Common Council, and Washington and his officers at Cape’s Tavern. Again thirteen toasts were drunk, such as “May the Trade of America center with those who have been foremost to defend her liberties.” The evening “was spent in great good humour, hilarity and mirth.” On December 1, Clinton hosted another dinner at Cape’s in honor of the French ambassador, the Chevalier de la Luzerne. Present were Washington, his officers, and “upward of one hundred gentlemen.” The revelers “with great conviviality” consumed 135 bottles of Madeira, thirty-six bottles of port, and thirty bowls of punch. Apparently glassware was broken.

December 2 saw a great display of fireworks, organized by Captain William Price of the Corps of Artillery. The program consisted of three sets, and included rockets, “chinese fountains,” illuminated stars, moons, and suns, an “illuminated Pyramid with Archimedean Screws, a Globe and Vertical Sun,” and concluded with “Fame descending a Flight of one hundred Rockets.” The Independent New York- Gazette reported that it was so “splendidly beautiful and so well conducted” that the spectators were rendered mute “unless when they some times manifested their satisfaction by loud huzzas.”

Finally, on December 4, at yet another dinner at Fraunces Tavern, an emotional Washington took leave of his officers and embraced his comrades, saying, “With an heart full of love and gratitude, I now take leave of you: I must devoutly wish that your latter days may be as prosperous and happy, as your former ones have been glorious and honourable.” This occasion, like all the other events of the week, was reported in newspapers across the nation.

A Holiday in the Making
In contrast, November 25, 1784 passed without much notice. If New Yorkers commemorated the day, they did so privately. Public celebration did not commence until 1787, when the Army brigade garrisoned in the city moved the date of its dress review to November 25, marching in formation and performing the feu de joi (“fire of joy”), the rapid firing of guns in succession that was traditionally used to mark victories and that ended with a thirteen-gun salute.

In the 1790s, the celebration became a regular occurrence, a local “national” holiday. New Yorkers attended the military display and then moved on to private parties or the theater. Theaters played a role in popularizing and commercializing the holiday by presenting historical melodramas and pageants about the Revolution.

With the beginning of the nineteenth century, the “anniversary of the evacuation of the British troops” became commonly known as Evacuation Day. This shift symbolized the change in meaning of the day, from an event experienced by the Revolutionary generation to an event memorialized by their children and grandchildren. Evacuation Day gained new resonance with the War of 1812, as veterans from that war marched alongside and then replaced veterans of the Revolution. Another shift came as New Yorkers began to see Evacuation Day as a day of play. Diarist George Templeton Strong referred to it as “…glorious Evacuation Day, glorious in one point, at least…that it allows us to kick up our heels all day at our leisure.”

In the 1830s and 1840s, the regular military were replaced by elite volunteer units, such as the Washington Grays and the Lafayette Horse Guard. Displays of precision gunnery also disappeared. Evacuation Day was also commercialized through depictions in popular prints by Currier and Ives. Barnum’s American Museum, at the corner of Broadway and Ann Street in lower Manhattan, advertised its location as the ideal place to view the parade (in paid seats) and then, of course, to see the exhibitions, which included wandering gypsies, fireworks, mechanical figures, and an albino lady.

National Trauma, Then Decline
As the Civil War approached, Evacuation Day became politicized as an expression of support for the Union. New York’s City Council, dominated by Copperhead Tammany Democrats, refused to take part or provide public funds for the celebration. At war’s end, the 1865 celebration was appropriately huge, with 8,000 soldiers and twenty regimental bands participating. But the national trauma of the Civil War played a large part in Evacuation Day’s decline. In the post-war years, the holiday became increasingly marginalized as it lost its meaning for most New Yorkers. Instead, the Fourth of July represented a renewal of nationalist spirit, and Thanksgiving, a more inclusive holiday that was traditionally observed in New York the same week as the Fourth, became a national holiday in 1863. The Brooklyn Eagle noted that “the intense anti-British feeling the citizens inherited from their fathers disappeared, and now New York is more concerned about trading with England than… avowing a hatred toward her.” The veterans of the War of 1812 were also dying off, “decrepit veterans of battles…sad-faced, poverty stricken shadows of themselves.”

The centennial celebration in 1883 was both the most spectacular celebration and the last gasp of popular participation. Organized by patrician John Austin Stevens, secretary of the New-York Historical Society, 25,000 troops participated, with over a million people, including President Chester A. Arthur, in attendance. A naval pageant, with 300 warships and private yachts, complemented the celebration. Stevens went on to found the Society of ’83, later renamed the Sons of the Revolution, which marginalized Evacuation Day by celebrating it privately through dinners and balls reported in society pages, not news headlines.

The last recorded observation of Evacuation Day was November 25, 1916, when sixty veterans of the Old Guard (the 3rd U.S. Infantry) raised the flag a final time. The same day, 45,000 spectators watched Army beat Navy at the old Polo Grounds in upper Manhattan. Thereafter, the holiday was relegated to newspaper stories about old New York customs. Its bicentennial was celebrated in 1983 with a parade and exhibition at the Fraunces Tavern Museum, but no revivals followed, although in 2008 the National Park Service lit beacons at twelve sites in New York and New Jersey and held a ceremony on the steps of Federal Hall.