On July 4, 1817, after years of debate and interruption by war, the first shovel of dirt for the canal was ceremoniously turned. The state-funded project, an engineering marvel of its day, was completed eight years later in 1825. The Erie Canal connected New York Harbor and Lake Erie at Buffalo, providing for the first time a direct, reliable, and inexpensive route from the Atlantic seaboard to America’s interior.

When it opened in October 1825, the “boldest and biggest American engineering project of its century” unlocked America's interior for trade and settlement. Transportation and food costs dramatically lowered. Boomtowns sprang up along the canal’s path and New York City, with its deep harbor connecting to the Hudson River, grew into the nation’s most powerful center of international trade and finance.

Millions of people poured into New York in waves, to work on or along the canal, or just to pass through. Though the canal would eventually be superseded by the railroad, a heady mixture of innovation and determination, and the industrious seeking and creation of wealth, was cemented in the American character. Undergoing a series of enlargements in less than a century, the Erie Canal now holds a central place in New York’s identity as the Empire State.

Explore a selection of Erie Canal documents below. Bring these resources into the classroom with Classroom Connections.

Learn more about the Erie Canal 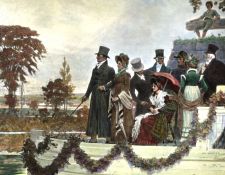 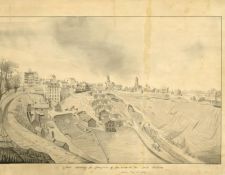 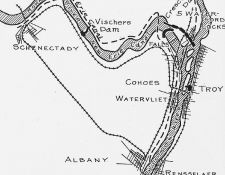