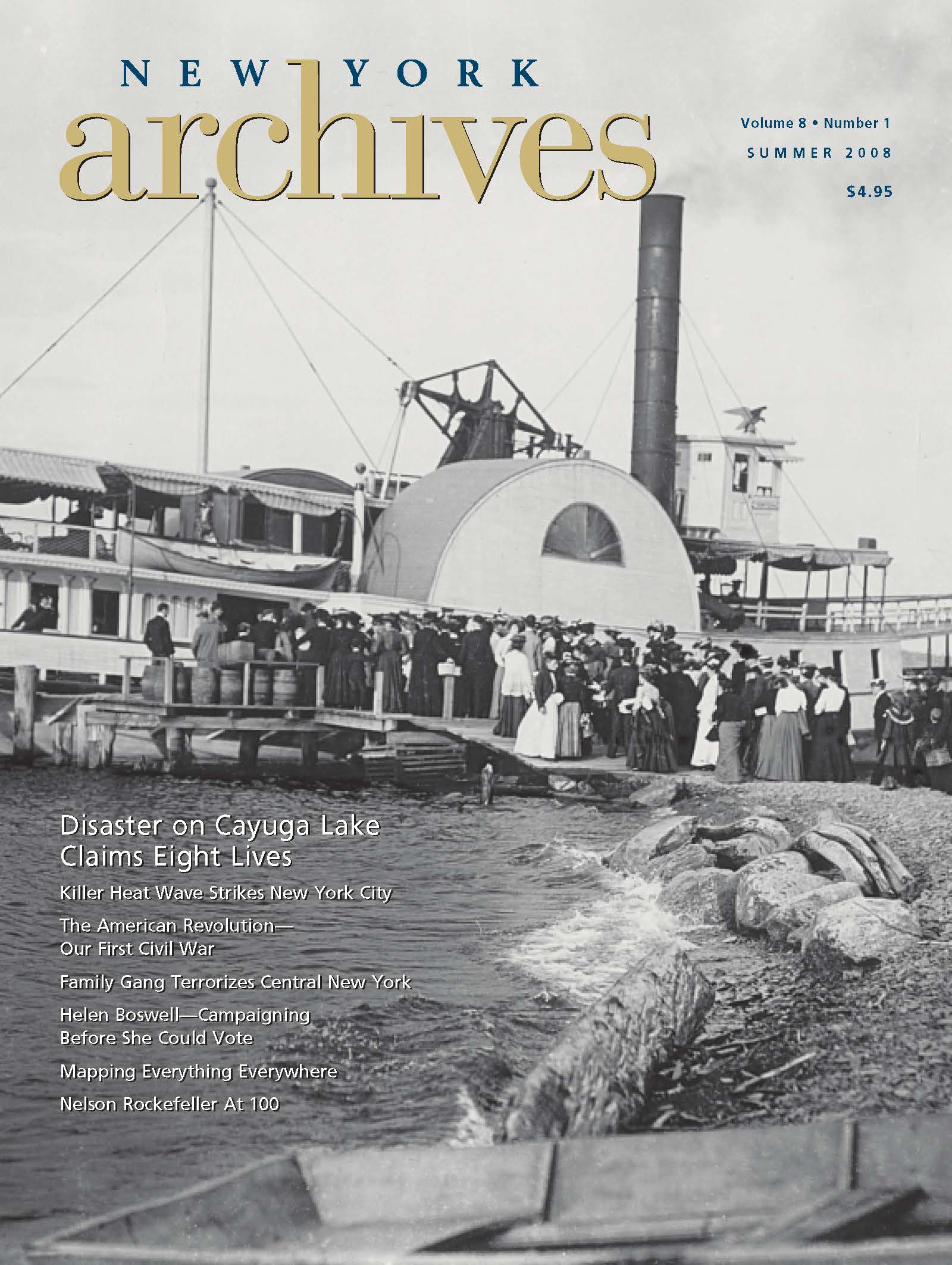 The Scourge of Summer
Edward P. Kohn
New Yorkers wait all year for summer's heat.  But in 1896, it began to kill.

Mapping America
Blake A. Bell
Founded in 1866, the Sanborn Map Company has seen America - and itself - grow and change.

Rockefeller at 100
Jeremy Naidus
Albany celebrates the legacy of Governor Nelson Rockefeller in an exhibit at the Empire State Plaza that he built.

Soldier of the First Civil War
David Bosse
An upstate Loyalist paid dearly for his views: not only was he banished from the state, but his presence was expunged from history.

Blazer of the Campaign Trail
Lauren Kozakiewicz
New York has been producing female political campaigners since the late nineteenth century - including Helen Varick Boswell, one of the best.

Fire on the "Frontenac"
Sharon A. Andrus
A 1907 Cayuga Lake steamboat tragedy has left crucial questions unanswered for more than a hundred years.

Gang of Brothers
E. Fuller Torrey
It took a lawman and a U.S. Representative to end the nineteenth-century Loomis family's reign of terror in central New York.

The Scourge of Summer

On August 15, 1896, Theodore Roosevelt, then thirty-seven and president of the Board of Police Commissioners, wrote to his sister Anna about the horrible heat that had plagued New York City for the past ten days. “The heated term was the worst and most fatal we have ever known,” Roosevelt noted. “The death rate trebled until it approached the ratio of a cholera epidemic; the horses died by the hundreds, so that it was impossible to remove their carcasses, and they added a genuine flavor of pestilence.” By comparing the number of deaths in Manhattan and Brooklyn during the same ten days, August 4 to 14, in 1895 and 1896, it is evident that the heat wave caused as many as 1,500 fatalities in New York City. It also affected a good portion of the central and eastern United States, from the Plains through St. Louis and Chicago to the cities of the East Coast. So, it was a national phenomenon that August, and was probably the worst urban heat wave disaster in American history. Yet because of the nature of heat waves––killing slowly, with no physical manifestation, no property damage, and no single event that marks them as a disaster— the 1896 New York heat wave remains one of the least chronicled urban natural disasters in America, even though it took more lives than the New York City draft riots of 1863 or the Great Chicago Fire of 1871. With day after day of temperatures in the 90s, high humidity, and nighttime temperatures never below 70°, the heat wave wore New Yorkers down and killed old and young, rich and poor. It took a particular toll on the urban poor, especially laborers who literally worked themselves to death. And for the most part, city officials stood by and did nothing, with the mayor only calling an emergency meeting of department heads more than a week into the crisis, when the heat wave was nearly over.

The Youngest and Oldest Victims
On Tuesday, August 4, after a fairly mild beginning to the month, temperatures in the high 80s arrived, accompanied by 90% humidity. According to the United States Weather Bureau, the high for New York City that day was 87°. Yet as with virtually every day of the subsequent heat wave, the official temperature was recorded high above street level, at an elevation free of much of the radiation heat from brick, concrete, and asphalt and able to catch at least some breeze. Down at street level, thermometers regularly recorded temperatures several degrees higher than the official reading, while temperatures inside the brick tenements of the Lower East Side easily reached 120°. According to death certificates filed in Manhattan on August 4, the first victim of the heat wave may have been fifteen-month-old Hyman Goldman. Hyman had arrived from Russia with his family only nine months before. For three weeks, he had been suffering from what nineteenth- century doctors called “cholera infantium,” a common diarrhea that afflicted children during the summer months and often proved fatal. Already weakened, Hyman had little reserve strength with the heat settled upon his family’s tenement apartment at 55 Broome Street. According to the doctor, the direct cause of his death was “Exhaustion.” Irma O’Brien, age four months and eighteen days, also died on August 4, from “Tubercular meningitis,” although the doctor listed “Heat” as the indirect cause of death. Over the next ten days, doctors in Manhattan alone filled out over 2,200 death certificates— almost double the number during the same period in 1895—using various euphemisms for describing victims of the heat. Many infant deaths were caused by “Summer diarrhea” or “Convulsions,” while adults died from “Asthemia,” “Exhaustion,” “Thermic fever,” “Heatstroke,” “Sunstroke,” and “Insolation.” Like the very young, the elderly were also at risk. Perhaps the heat wave’s oldest victim was Catherine Clark, age 103, a widowed housewife who had immigrated from Ireland sixty-three years before. Living in a rear tenement at 430 East 13th Street, Catherine had long suffered from chronic bronchitis, another common ailment among the poor of the Lower East Side. Yet her doctor made a point of noting on her death certificate that her “Hearing & Sight & Cheerfulness Were Fine” when he had last attended to her. Her cause of death, he wrote, was “Bronchitis & Heat.” The contributing cause: “Old Age.”

Workers Die, Survivors Are Desperate
In the end, it was New York’s workers who suffered the most. Working through the hellish heat killed hundreds. John Singer was typical of the young and healthy laborers who literally worked to death. Forty-five years old, married, and living in a tenement on Avenue B, Singer was a silver molder—already a hot occupation—and fell ill on August 11, struggling for life during the hottest night of the heat wave. The official temperature on August 11 never dropped below 76°, although it was probably much warmer inside Singer’s brick tenement. When he succumbed the next morning, the doctor listed the cause of death as “Heat Stroke,” with the indirect cause “Summer Heat.” For most New Yorkers, there was simply no relief available. Even ice was a precious commodity. Home refrigerators did not achieve widespread use until World War I; before that, Americans relied on large wooden iceboxes, usually lined with tin or zinc, to keep food cool and fresh. Ice was purchased from commercial producers or ice harvesters, who cut it from the rivers during winter and stored it in large blocks insulated with sawdust to reduce melting. Yet it remained expensive. This inspired Theodore Roosevelt to suggest that the city purchase and distribute ice to the poor. “I had to be in town several nights,” Roosevelt wrote his sister, “and I saw some strange and pathetic scenes when the ice was distributed.” On August 13, Roosevelt supervised the distribution of 100 tons of ice in ten-pound blocks from the police precinct houses. Two hundred thousand pounds of ice meant that about 20,000 blocks were distributed (which cost the city $325), but still it was not enough. The police stations were mobbed. With the ice gone, Roosevelt recommended that 200 tons be given away the next day, a number that eventually rose to 350 tons. Roosevelt noted some fraud in the process, with ice being resold and wealthy parents sending their children for free ice. The police took to asking the children what their fathers did for a living. When one girl was asked where her father was, she replied, “I don’t know, sir, we haven’t seen him for six months and mother is sick and can’t work.” The New York Times described the sad scene: “Half-fed children, barely able to drag themselves about, were sent by their parents to carry away ten pounds of ice.” Some children waited in line two hours. At the busy Madison Street precinct house, which distributed ice to about 1,500 people on August 14, the ice was late in arriving, so hundreds of impatient children, armed with pots and pans, started banging them together, creating a “deafening din.”

“The Days of Death Continue”
On August 11 the heat wave reached its height, with an official high temperature of 94° (although much hotter on the street) and high humidity. The New York Times wrote, “The days of death continue. The sun is still unwearied of scourging.” That day the heat contributed to as many as250 deaths in Manhattan, with another 100 in Brooklyn, and almost 300 people were admitted to hospitals. New Yorkers seemed to go mad, killing each other and themselves. Because the city did not lift its ban on sleeping in parks, people took refuge on their tenement roofs or down on the piers, and inevitably some fell to their deaths or drowned. Every salivating dog on the street was labeled “mad” and was gunned down by a police officer. The SPCA reported that 500 horses had died in the previous five days due to heat. Residents of 96th Street complained that sixteen horses belonging to the Second Avenue Railroad Company had died and were still lying in the street, while in a short walk one reporter counted more than a dozen dead horses. In his Autobiography (1913), Roosevelt would later recount the story of a shopkeeper who complained of a dead horse that had lain in front of his business for several days. When the city finally sent a giant cart containing eleven other dead horses to take the carcass away, the cart broke down. The man, Roosevelt remembered, sent “a final pathetic letter in which he requested us to remove either the horses or his shop, he didn’t care which.” The heat wave finally broke on August 14: the high temperature was only 80°, and the nighttime temperature fell to 70° for the first time in ten days. With the official response limited to the initiative of individuals like Roosevelt, and some private charities already giving away free ice, it is not surprising that the city only opened “ice stations” for the poor beginning in 1919. Still, the heat wave may have contributed to the debate over tenement conditions among the poor and to the subsequent passage of the Tenement House Law of 1901 that mandated better ventilation for urban housing.

Portent of the Future?
Today, heat remains the country’s biggest natural disaster killer, claiming on average more lives than earthquakes, floods, tornadoes, and hurricanes combined. Recent heat waves around the world reinforce heat’s ability to kill: 1,700 were killed in the 1980 U.S. heat wave; more than 700 people died in Chicago in 1995; and the European heat wave of 2003 contributed to an estimated 52,000 deaths, 15,000 in France alone. Most scientists agree that the number of extreme heat waves will increase, and the World Meteorological Organization estimates that the number of heat-related fatalities could double in less than twenty years. Yet people died in 2003 and 1995 for the same reasons they died in 1896: heat sources in the city, particulate matter in the air, and the very architecture of cities; employers who took no precautions for their workers, who literally worked themselves to death; no access to air conditioning or cool water; and nothing done to aid the most vulnerable, the very young and the very old. Thus the 1896 New York heat wave can still give us clues as to how cities should and shouldn’t respond to future heat waves, so lives can be saved.